What’s the first thing you look for in a mobile phone? Portability? Good call quality? Good battery life? Great music playback? You’ll find some of these in Nokia’s N93, but not all. Battery life is only average and the N93 is not particularly portable.


But hey, this handset is a movie making machine as well as being a smartphone, so in place of portability you get video recording par excellence, complete with the ability to show said videos at friends and family via a wired connection to your TV.


It is the video recording that steals the show with the N93, but there a price to pay. Most noticeable is the handset’s size and weight. At 180g you are going to be carrying a phone that is double the weight of some of the smallest and neatest handsets around. And at 28.2 mm thick and 55.5 mm wide you are going to need big pockets – this is a PDA sized phone. 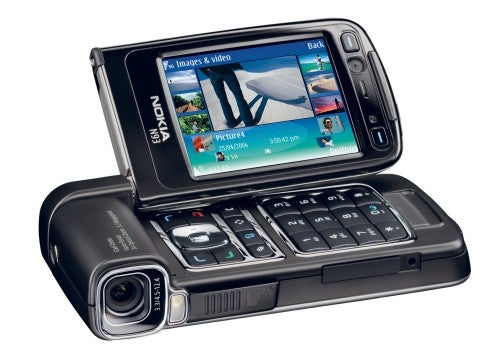 I missed out the height measurement there. Here’s why. The clamshell N93 measure 118 mm tall until you open its flip, at which point it tops a massive 225 mm.


Why is this such a huge handset? Well mostly this is down to the lens. A Carl Zeiss setup is present, as it was in the predecessor to this handset – the Nokia’s N90. This time around the lens has a 3.2 megapixel stills shooting capability with 3x optical, 20x digital zoom and 640 x 480 video at 30 frames a second with audio. It has a 3x optical and 8x digital zoom and there’s an autofocus and a flash too.


As with the N90, the lens sits at the head of what would under normal circumstances be the clamshell hinge. However, whereas the N90 had a central hinge and pivoting system on the lens section, in this case the lens is fixed to the bottom part of the handset, and the upper and lower parts of the clam break away from each other via a dual pivot hinge on their upper right edge. 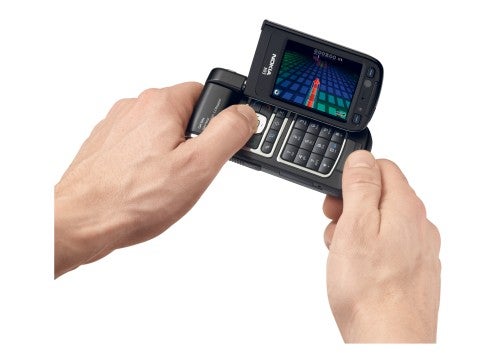 What this means is that you can, should you feel inclined, open the N93 as if it were a tiny laptop computer. The screen locks at about 110 degrees and pops into landscape orientation. You can use the large navigation button to get around within applications, and some of the other buttons are convenient to use in this configuration too, but number dialling is difficult and text entry out of the question.


You can also open the N93 more traditionally as a clamshell handset. And there is a third option. You can open the clam to 90 degrees, at which point it soft-locks in position, then swivel it round counter clockwise.


The lens is now pointing away from you, and you’ve formed a little video camera for yourself. The screen orients itself to landscape format and, anticipating that you want to shoot some footage, turns on the camera. A slew of little buttons (on what we would more usually call the right edge of the phone) is now under your right thumb. 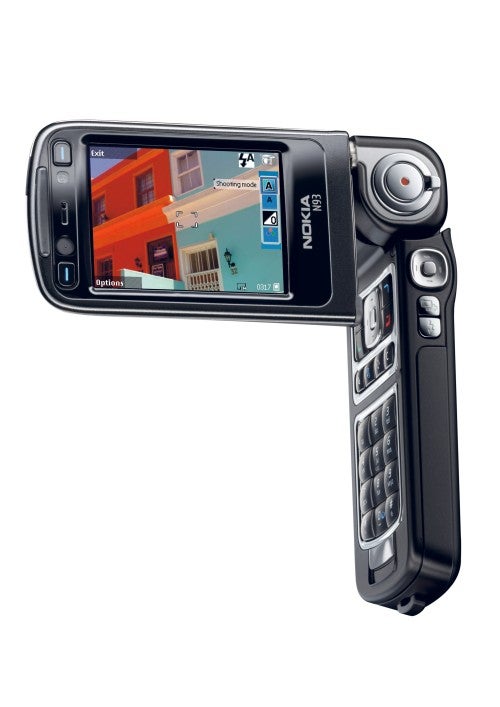 Holding the N93 right handed you’ve got buttons for turning the flash on and off and for switching between video and stills modes. You’ve got a round swivel for activating zoom and a button inside this for starting and stopping video shooting or grabbing stills. There is a tiny navigation button with central select key, and for your left hand there are two softmeu buttons at what was previously the top end of the screen. Between them these give you access to all the camera functions.


The main problem with all this is that it takes a while to set things up – long enough that you may miss the candid picture or video you were after. And you’ll have to remember to remove the lens cover – which is not attached to the main body of the handset.

On the other hand, the quality of video output to a TV using the provided cables is great. There are added bonuses as far as this is concerned as when you attach the N93 to your TV you can send anything you like to it. That means things like Web viewing, photos and other content.


The N93 runs Symbian S60 v3, making it a capable smartphone with core applications like contacts, calendar, tasks manager built in. There’s an Office group of applications that includes a sound recorder, unit converter, calculator, note taker, the Adobe PDF reader and QuickOffice for viewing PowerPoint, Excel and Microsoft Word documents. Though as ever looking at documents on the 320 x 240 pixel main screen is going to be a bit of a challenge, albeit that the screen is among the brightest, sharpest and best I’ve seen on a Nokia handset. At 36 x 49mm it’s one of the largest too. 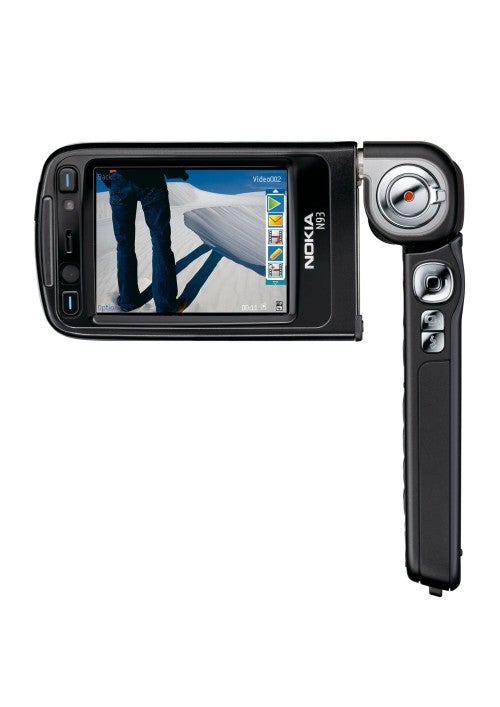 The Office group also sports a barcode reader. You can use this with the camera to extract information like URLs and phone numbers from barcodes. I can vouch that it works, but also that not all barcodes offer such information, and frankly, I think it’s of dubious utility. Still, if you want to go mad scanning barcodes, I guess you can do so.


An FM radio and music playback are both on board, as is Nokia’s LifeBlog software. The Web browser worked fine both over 3G and Wi-Fi, which is here alongside Bluetooth and infrared.


Music playback was loud and of listenable-to quality through the speaker, and fine through Nokia’s provided headset, but why-oh-why didn’t Nokia provide a converter from Pop-Port to 3.5mm. The box includes a protective pouch, USB cable and TV cables, so why not the oh-so-cheap Pop-Port to USB converter? 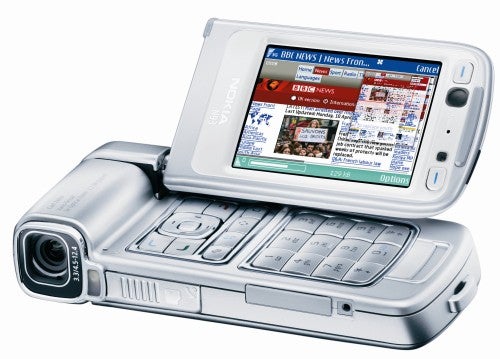 There is an absolutely tiny front screen which looks lost in the front fascia, but despite its mere 128 x 36 pixels it has some useful functions. It shows the current time and signal strength, and will tell you who is calling and whether the incoming call is a video call. If you happen to be playing music through the handset, the right side-mounted mini navigation pad can be used to control playback.


The N93 has 50MB of internal memory, which frankly, just isn’t going to be enough. Never mind carrying music around to play back, you are going to need some serious storage for video footage. Nokia includes a 128MB mini SD, but again this is paltry. It would have been nice to see Nokia cross a line and ship a 1GB card with the N93.

When it came to testing the camera both stills and video shooting were impressive. Indoor still shots in low light conditions were the most disappointing, but the sample image below, shot indoors by a window into which autumn sunlight was streaming shows the lens’s ability to cope with fine detail and also the capabilities of the auto focus at close range – the image was shot very close to the subject so that focus is lost out to the left side, but the fine detail is striking.


I got a mere five and a half hours of continuous music playback through the N93’s loudspeaker, playing music from a miniSD card. In general use I found myself charging every two days just to be on the safe side. Given all the potential in this handset, from Wi-Fi to movie shooting, 3G video calls to TV-out potential, it is a shame the battery didn’t perform better.


Video and stills shooting are clearly the N93’s main selling points, but there is a lot more going on here thanks to Symbian S60 v3. It is a great shame the N93 is such a beast for the pocket and has so little internal and provided memory. If Nokia could squeeze the overall hardware size down, the N93 would be very desirable indeed. As it is, it is just too bulky to be a main handset and too expensive to be a second one.

This is a resized image so that you can evaluate the overall exposure. 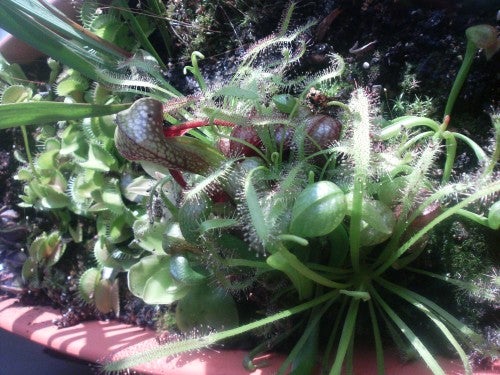 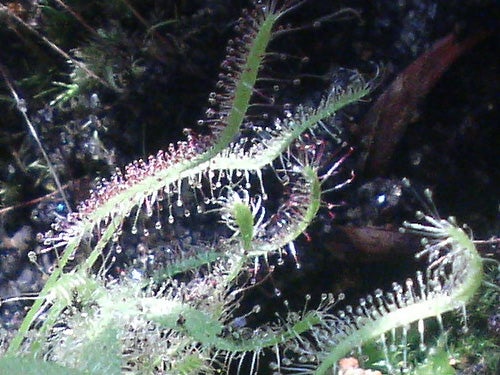