Available on PS4 (reviewed), Xbox One, PC
Steep might not be the game you expect. Go in looking for something in the vein of SSX, Amped, Shaun White Snowboarding or Cool Boarders and Steep will still give you some things to cheer about but fail to deliver what you’re really looking for. To really get to grips with Ubisoft Annecy’s game you have to understand where it’s coming from. With its open world structure it’s firmly in the established Ubi game mould, doing for extreme alpine sports what The Crew did for driving and Far Cry 2 for the FPS. Yet when I think about its feel, I keep coming back to a more unexpected influence: Nintendo’s Pilotwings 64. For all its stunts, thrills and breakneck racing, Steep is at its best when you chill out, have fun and just explore.

It helps that snowboarding is just one of four pursuits on offer (or five if you include the odd hike). Don the wingsuit and you can launch yourself off cliff edges and platforms, swooping through rings to rack up points or speeding perilously close to the ground. Open up your paraglider and you can soar over mountains, descending through trees and gullies or using thermals to climb upwards and reach new peaks. Then, of course, you have the skiing and snowboarding, both keyed into the same race and trick showcase challenges, but each having their own moves and feel. 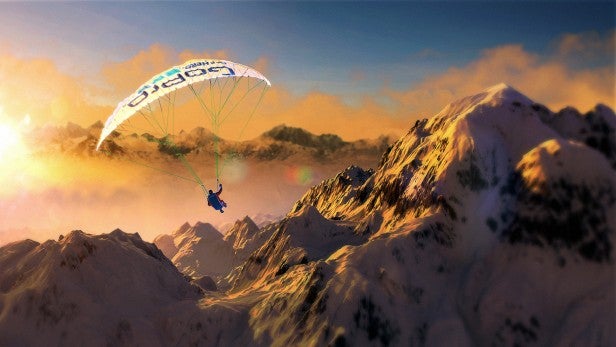 Then there’s the map. Ubisoft Annecy has compressed the scenic highlights of four alpine regions into one winter sports wonderland, putting Mont Blanc within easy reach of the Matterhorn and Monte Rosa just around the corner. You’re free to explore the whole area, but to get to certain peaks you’ll need to unlock a ‘drop zone’ first, entailing getting close to them by air or land or checking them out with your binoculars from less than 1Km away. Unlock a drop zone and you also unlock the related challenges, which might be races, stunt trails, wingsuit events, paragliding challenges or cross-country time trials. You’ll even find rather surreal mountain story events, where the mountain itself will reveal objectives that will help you get to know it better.

It’s a great map to explore, partly because the alpine scenery is so beautiful and also the actual feel of skiing and snowboarding is so brilliant. While there’s a little scenery pop-in, the odd rough texture and the occasional dropped frame, Steep often looks stunning, particularly if you’re lucky enough to be playing it on a 4K screen with the PS4 Pro. There’s a convincing – even stomach-churning – sense of speed, and the handling on both skis and snowboard just feels right, to the extent that the way your snowboard cuts through the powder, the edge gripping as you turn, is almost tangible. Based at a major centre of the winter sports world, Ubisoft Annecy has created a game that’s clearly based on years of real experience. 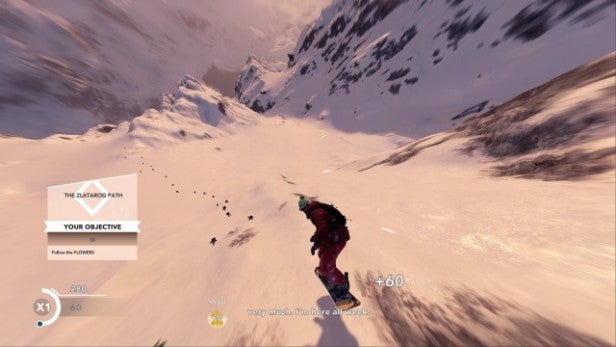 It’s no dry sim, either. Drop zones work like fast-travel points, so you never have to waste time wandering to a new event or challenge, and there’s an impressive variety of stuff to try. Some events are almost relaxing, giving you time to explore on a cross-country ski route or enjoy the scenery as you glide from peak to peak. Others are pure adrenaline, pushing you to chain together daredevil flips and rodeos or fly at speed through rock arches, glacial ice fields and narrow passes – all thrilling stuff.  Others still go for knockabout comedy, asking you to do little more than reach the bottom of the mountain as quickly as possible, even if that means breaking a few bones on the way.

Plus Steep is built for social play. Instead of cramming the Alps with CPU-controlled racers or extravagant rivals, Steep has you sharing the mountains with other online players, with a quick ‘group up’ function and options to save your best efforts as challenges and share them with your friends. You can also capture shots and videos, picking camera angles to make you look your best. 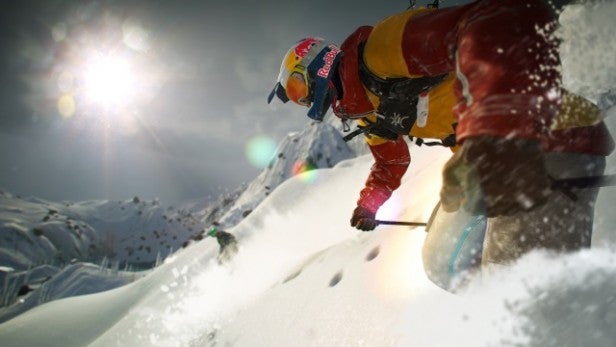 In short, this is a game of freedom and choice, where you can spend whole days just wandering around the map, blazing your own trails, unlocking new drop zones and tackling whatever events you fancy. You can level up gently, opening up new areas and gated challenges, or simply relax and focus on exploration and discovery. It’s also good to see a willingness to be a bit eccentric, whether that means a challenge where you have to find a talking tree or another where you’re doing your best to trace a trail of flowers. In the end, Steep’s Alps are a pretty cool place to hang out.

Yet this attitude has a downside, and that’s that Steep isn’t all that compelling. There’s nothing to keep you moving forward beyond the pull of more peaks, more drop zones and more events, and with time one area and one event begins to look and feel much like another. The challenges become more difficult, with more awkwardly placed checkpoints or tighter rock arches to glide through, but the actual experience fails to develop. Like so many previous Ubisoft open-worlders, Steep gives you an awful lot of things to do but not enough motivation to keep doing them. As a result, Steep is an enjoyable, amiable sort of game, but not the kind of game that keeps you hooked. 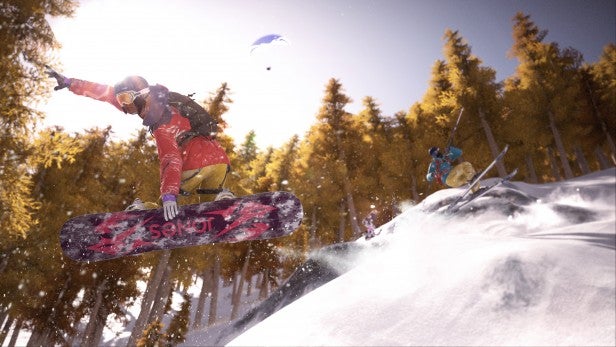 What’s more, it’s beset by minor niggles. The menus and interface seem over-complicated, making switching or customising characters unnecessarily hard work. The 3D map can be hard to get your head around, and it’s trickier than it should be to find your next event. At times you’ll activate a wingsuit or paraglider challenge, then find your character stuck on the platform, unable to continue, until you manually switch to, say, your snowboard then back to the wingsuit again. Characters will start some challenges facing in entirely the wrong direction, while getting stuck on, behind or even halfway through a rock happens more than it should.

What that all means is that Steep ends up in the same position as The Crew did two years ago; as a fresh and very different take on a genre which has all the fundamentals in place, but that isn’t quite as polished or rewarding as it should have been. It’s an easy game to recommend to fans of skiing, snowboard and exploration, but a tougher sell for those who are looking for more straight up thrills. With a few tweaks and a good expansion pack Steep could still reach its potential, but right now it has a climb ahead of it and that climb is going to be, well, steep.

Verdict
Ubisoft Annecy has crafted a gorgeous-looking winter sports game with a strong foundation of exploration, enjoyable gameplay and a feast of events to unlock. What it hasn’t done is create a pathway through that game that will keep you playing through to the end. Despite the variety of events and sports the action and scenery grows repetitive, while some minor issues keep on cropping up. The result is a game that’s close to brilliance, but not quite close enough.