A powerful personal blender, the Ninja Foodi Power Nutri Blender 2-in-1 with Smart Torque & Auto-iQ CB100UK can deal with the toughest ingredients to make great smoothies. It's the Nutri Power Bowl that adds flexibility, letting you make sauces, nut butters and more, all without the ingredients sticking. It's exceptionally loud, though.

A full-on blender can be a waste of space for people who largely want to make smoothies, with just the occasional foray into dips and sauces. For these people, the Ninja Foodi Power Nutri Blender 2-in-1 CB100UK could well be the right choice. It comes with a self-serve cup and new Power Nutri Bowl to make nut butters, sauces and the like.

With a powerful 1100W motor, this easy to use blender can deal with just about everything – but it’s super loud.

If you’ve seen a recent Ninja blender, then you won’t find the CB100UK a million miles away. The main unit is the powered motor base, into which you clip the provided accessories. For this model, there’s a 1100W motor, down from the 1200W motor in the BN750UK. As you’ll see later, this doesn’t make much difference in practice – the less powerful motor is fine since you’ll only ever be working with smaller volumes of food.

As with recent Ninja blenders, the base comes with Auto IQ programmes, to take the guesswork out of blending. There are auto settings for Blend, Crush, Mix and PowerMix; the handy manual offers a guide on when to use each mode. There’s a basic Start/Stop control and a Pulse option, too. 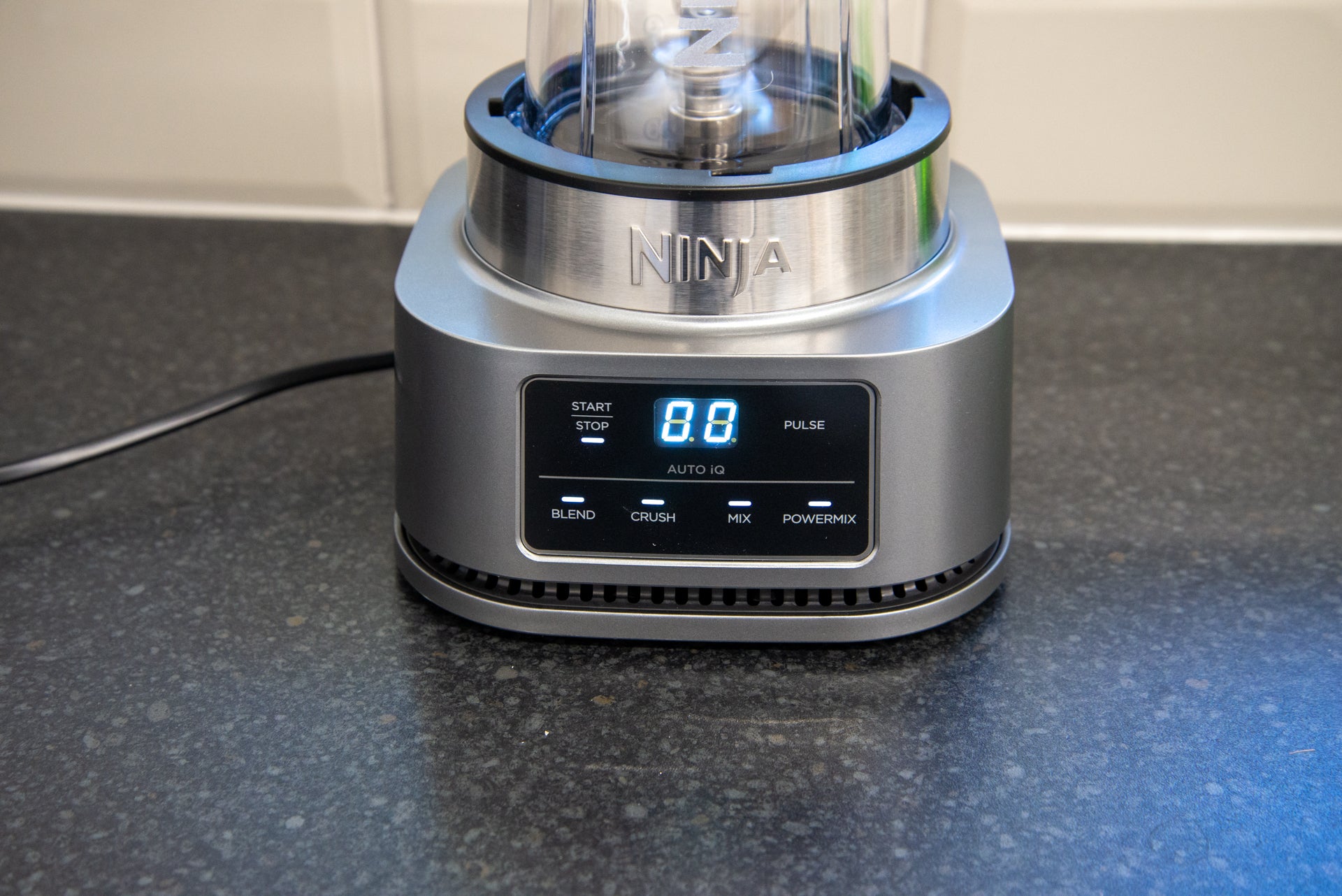 In the box, Ninja has provided its robust single-serve cup, which holds up to 700ml of liquid. This has both a blade assembly and, when you’re finished mixing, a travel lid that you can screw on and drink out of. 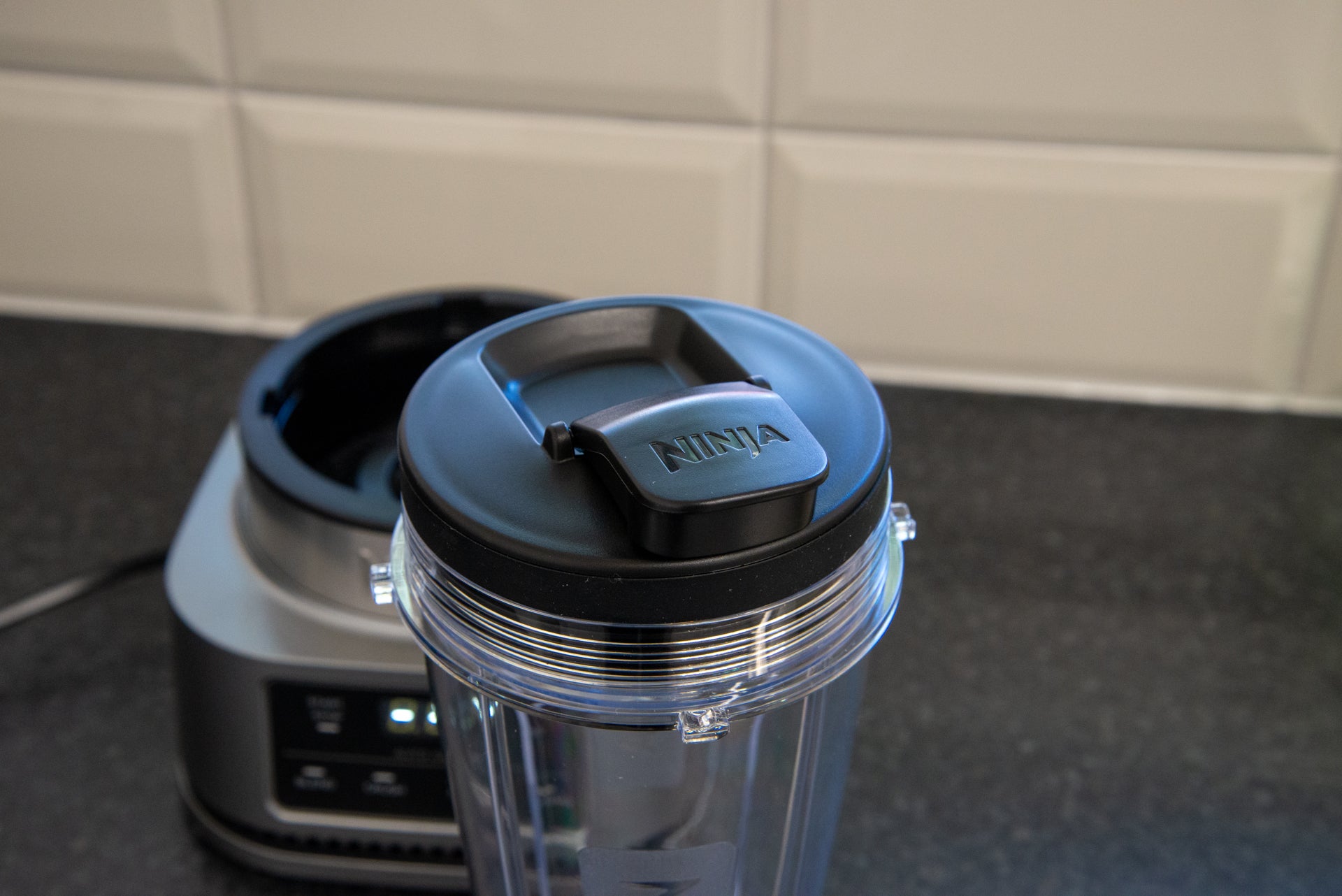 Next, there’s the new 400ml Power Nutri Bowl, which takes the same blade assembly, but also has a storage lid. You’ll also notice its Smart Torque twice dial, which is at the bottom of the bowl when stood up, but becomes the top when inserted into the main base. Twisting the Smart Torque turns the paddles inside the Bowl, preventing sticky ingredients from adhering to its sides. In theory, it means no more scraping down the sides of the Bowl.

Although all of the components – bar the blades – are plastic, they feel tough. Plus, they’re all dishwasher-safe, which makes cleaning up at the end of a session a cinch.

As with other Ninja Blenders that I’ve reviewed recently, the Ninja Foodi Power Nutri Blender 2-in-1 with Smart Torque & Auto-iQ CB100UK is super-loud. I measured it at a peak of 97.3dB – that’s louder than an underground train. Admittedly, you’ll be running this blender for only short periods, but it’s not pleasant to stand next to while it’s doing its thing.

To see how well the CB100UK performs, I put it through a series of tests. First, I started with ice crushing, filling the self-serve cup with ice cubs. Using the Crush Auto IQ programme, I soon had a cup full of powdered snow-like ice, with no big chunks left behind. 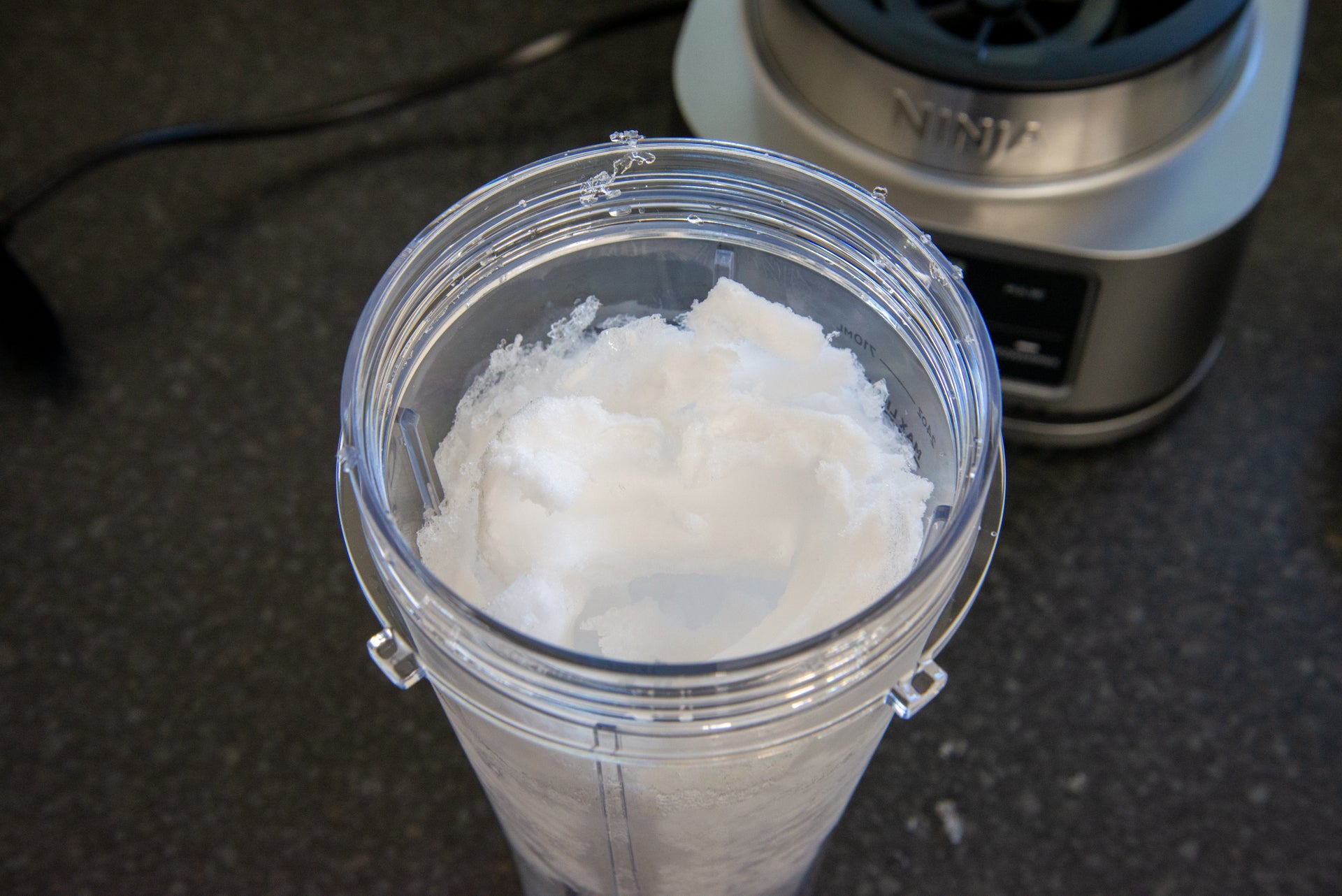 Next, I made a smoothie. First, I took some coconut flakes and attempted to grind them to see how well the CN100UK copes with dry ingredients. In short, not very well. The high speed of the motor tends to throw the bits into the air, giving uneven results. If you need to grind spices or work with dry ingredients, this isn’t the blender for you. 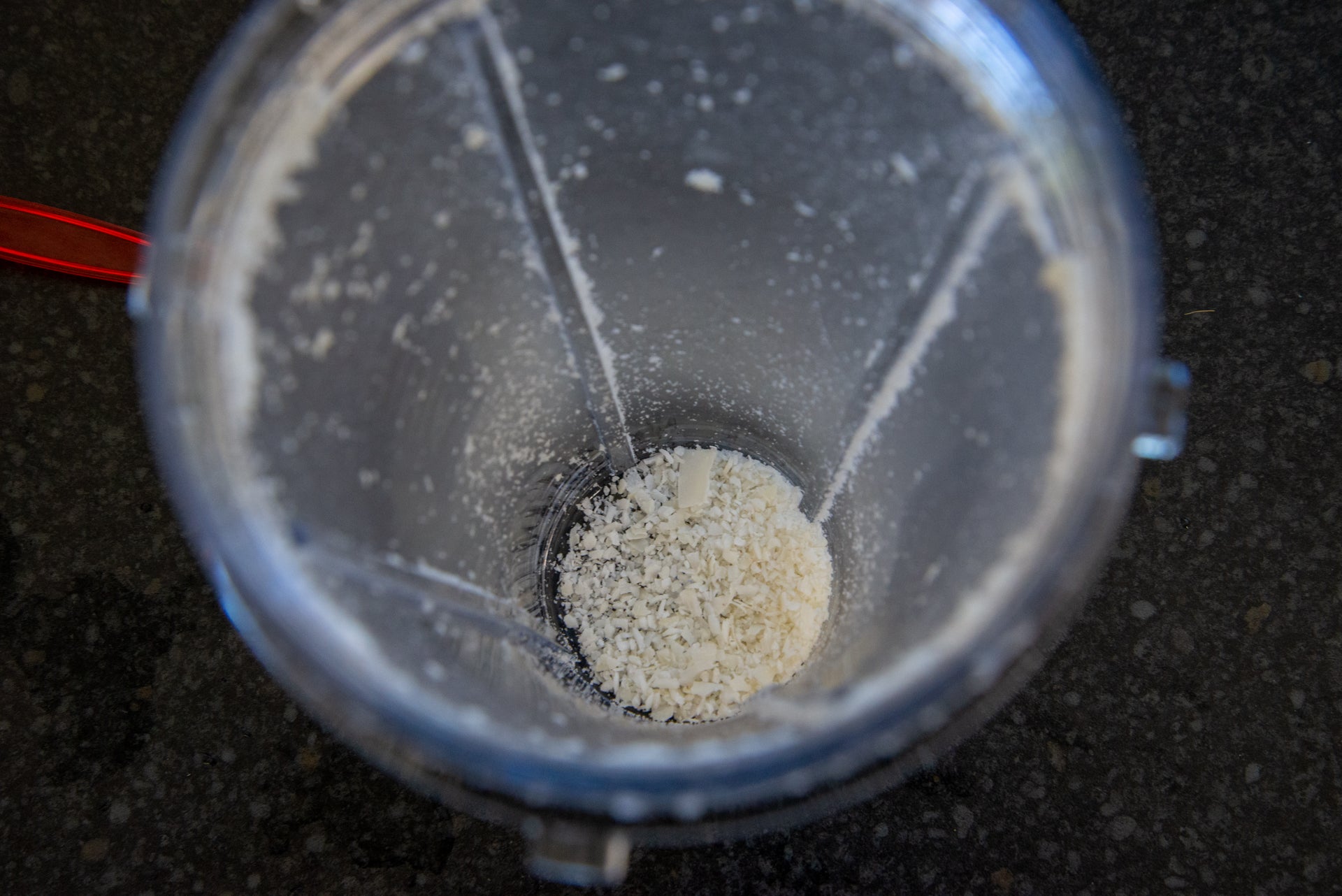 To be fair, this product isn’t really designed for that job. Adding to the coconut flakes, I put in pineapple chunks (including the core), mint leaves, yoghurt and coconut milk. Using the Blend option, I ended up with a perfect smoothie, with no large chunks left and the mint and coconut spread evenly through the mix. 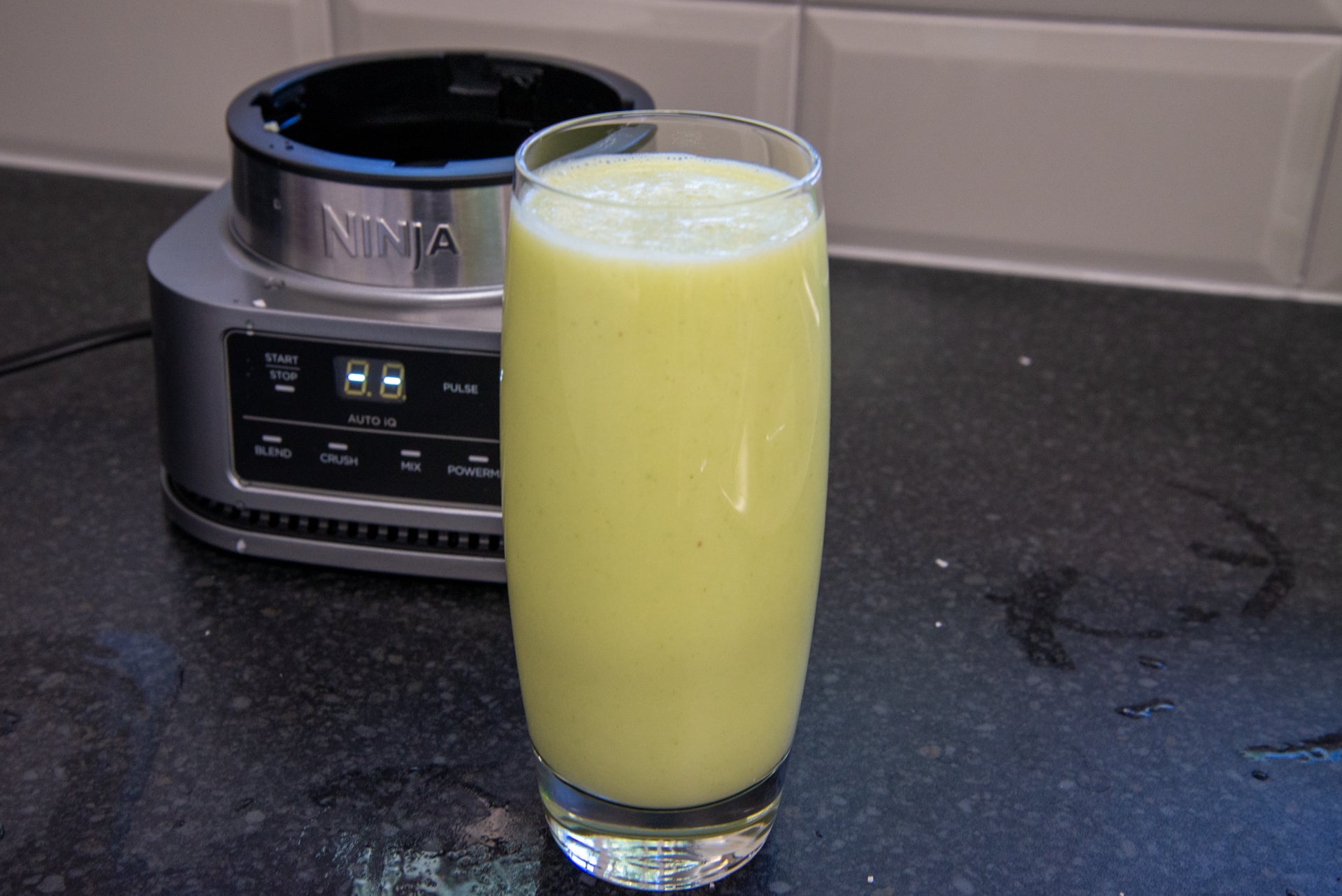 Next, I made a strawberry sauce in the Power Nutri Bowl using strawberries and honey. This time I had to turn the top of the lid while the unit mixed. It wasn’t too much effort, but it meant that none of the ingredients stuck to the side of the bowl, giving me a delicious and smooth sauce without having to scrape down at any point. 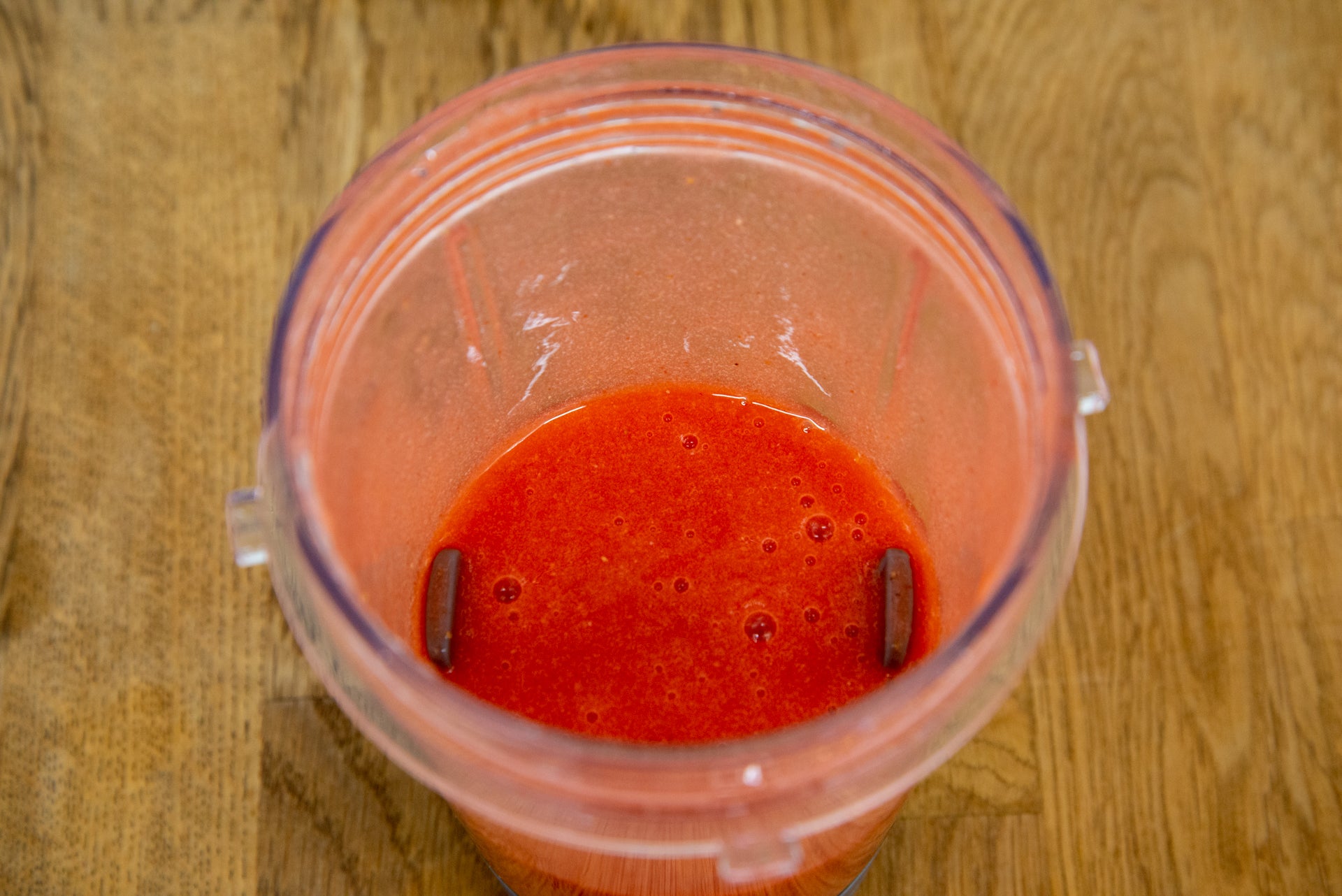 If you don’t need a full-on blender with a big jug, such as the BN750UK, and you want more than just single-serve drinks, the Ninja Foodi Power Nutri Blender 2-in-1 with Smart Torque & Auto-iQ CB100UK is an excellent choice. It’s powerful and flexible, and my only complaint is that it’s very loud. If you need something bigger, check out my guide to the best blenders.