The level of detail is consistently impressive. The main storyline drags you through the fantasy world, through trips back home and from dungeon to dungeon, but there are always new spells to learn, new ways in which to use them, and a host of side-quests, whether the odd jobs you can take on through the Swift Solutions offices and job boards posted around the towns and cities, or the bounty hunter missions that have you tackling specific monsters. 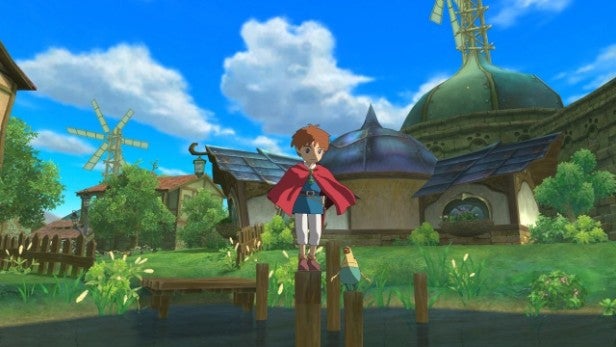 Collecting, levelling and equipping your familiars becomes an art in itself, with real advantages to certain combinations, and there’s even a recipe-related crafting system. Ni No Kuni might look lightweight, but it has as much depth as any Final Fantasy, and it’s a lot more engaging in the first few hours than either of the FFXIII games we’ve seen so far.

Ni No Kuni – Back to Earth

Sadly, while the game reaches for the stars and often finds them, it can’t help dragging you back to terra firma. The size of the game’s open landscapes adds to its epic feel, but also means that there is a lot of wandering around complete with endless monster encounters. Sometimes it would be nice to go from A to Z without tackling a string of mindless beasties, and there’s not enough other interest in the world, bar a few hidden treasures, to liven up the grind. 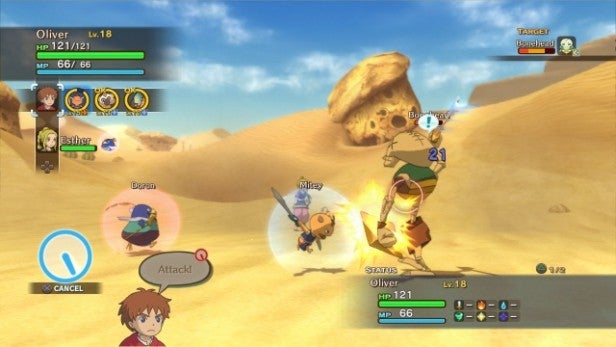 Many of the game’s ‘dangerous places’ – or dungeons to you and me – are also uninspiring. They look nice enough, but unless you’re bashing the local fauna there’s just not that much to see. There are sequences where the game takes on a more imaginative, almost Zelda-like approach, but these aren’t the norm by any means.

And Ni No Kuni can also be annoying. You can only save in dangerous places at specific checkpoints, which can be irritating when the difficulty level ramps up. Die and you can either return to the title screen and load a save game or continue from the last checkpoint, but taking the latter route involves a 10% levy on your wallet, which seems to function more as a tax on avoiding menus and a penalty for not saving more often than anything that makes any gameplay sense whatsoever. And why not let you load straight from the death screen?

These minor issues might be more serious if Ni No Kuni was a difficult game, but in fact it’s generous and forgiving. If you die in a monster encounter it’s usually because you haven’t stocked up on healing goods or watched your health gauges, and the gameplay encourages quick levelling, to the extent that familiars in your party level up even when they’re not being actively used. 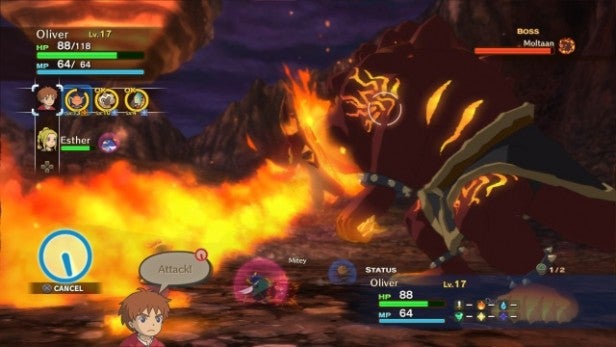 However, this doesn’t cheer you up much when the game throws in a sudden, hard, difficulty spike, usually in the shape of a boss. The boss battles in Ni No Kuni can look amazing, and we love the Zelda-style cinematic presentation, but cheap high-damage hits are nobody’s idea of fun, particularly when CPU-controlled allies seem incapable of blocking or evading. You can get past the worst bits with a little added grinding, but it definitely pays to take side quests and bounty hunts rather than try to push your way through the next chunk of tale before you’re ready.

These aren’t uncommon complaints. In fact, they’re pretty endemic to the Japanese RPG as a genre. What’s frustrating is that Ni No Kuni isn’t just another Japanese RPG. It’s a very special game with a fabulous world, an interesting story and a lot of strange and distinctive characters. It’s also one of the few Japanese RPGs of recent years that seems keen to play with the mechanics, and find ways to make the gameplay richer and more exciting. When you put these things together you get a game with the potential to reach beyond the usual Final Fantasy/Dragon Quest/Tales Of audience and win over gamers from eight to eighty.

Ni No Kuni is a hair’s breadth away from being an RPG classic. Between them Studio Ghibli and Level-5 have constructed a fantasy world with the same imagination as you’d find in the studio’s films, and told a rich, involving story with surprisingly sophisticated gameplay. It’s this imagination that makes the game so great, but a dearth of it in some areas holds it back, while some minor irritations don’t really help. A near-masterpiece rather than a masterpiece, then, but still one of the best Japanese RPGs of a console generation.

Previous
Ni No Kuni: Wrath of the White Witch Review