Dwayne doesn’t believe in me. Just as we were lining up on some city street somewhere in the US, ready to burn rubber in our “sweet rides”, Dwayne sent me a message calling me a “softie” and telling me that, in his considered opinion, I would never make it on the streets. It didn’t matter how much I won, how many rival racers I left trailing in my dust, in his mind I’d never be king of the road.

This is, of course, pretty much the motivation for every single street racer you can think of. From Midnight Club to Asphalt, from Need for Speed to Fast & Furious, you always start out as a newbie trying to prove his worth and you always have to come up through the ranks, beating the city’s high flyers one by one in order to hit the top.

Throughout the latest Need for Speed (dubbed No Limits for no real reason whatsoever), you’ll encounter rival racers eager to put you down, typically just seconds before the race starts and you blow them away. And, believe me, nine times out of ten, you will blow them away. EA has long been accused of failing to get to grips with the balance of a free-to-play release, often charged with being way too eager to make you part with your cash early on. In Need for Speed: No Limits, the publisher appears to have gone completely the other way, producing a game that’s far too generous. 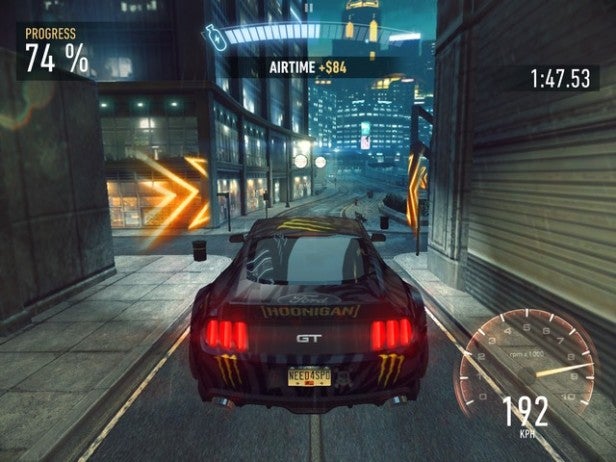 Several days into my test of No Limits, I still hadn’t felt the need to part with any real cash in order to continue my progress. Indeed, I hadn’t actually encountered a break in play where I could even consider spending any of my hard earned cash; one race followed the next, followed the next, each one unlocked as I was rewarded with the required parts needed to upgrade my car to the next level at the end of each encounter. It went on, and on, and on, with every success ensuring there was no waiting, no grinding and no spending required.

As such, if engagement was the sole measure of any free-to-play release, Need for Speed: No Limits would be top of the charts. In terms of the sheer amount of options at your disposal, EA’s latest blows away all of the competition; as well as the main career mode, where you take on a series of challenges in each chapter before racing the big name in that part of the city, there are also ‘legal’ street racers across a multitude of different car classes. You can upgrade your vehicles in the garage, mod them in the modshop, buy new parts for them in the Loading Docks or splash out for serious bits of kit on the black market, all before racing them in tournaments or live special events on the side. The sheer amount of different content in Need for Speed: No Limits and the way it’s layered into your progress is something to be admired. 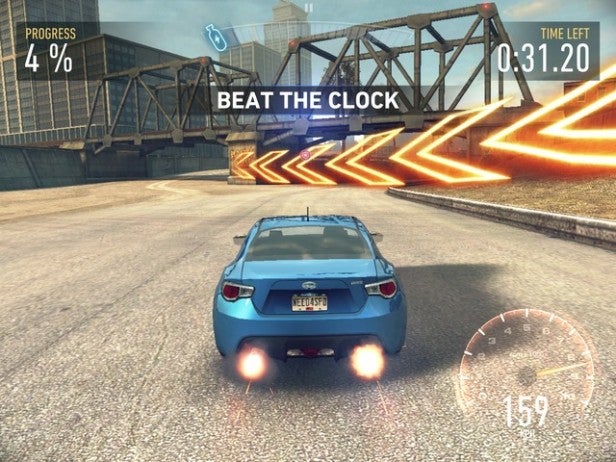 Where things fall down is, for large parts of play the whole thing is just too easy. On track, your input is fairly minimal, with acceleration taken care of and only steering, nitro boosting and drifting around corners left to your own devices. Whether you’re talking flat out races or challenges (which range from stringing together nitro boosts to chasing down a solo rival or avoiding police roadblocks), most contests are less than half a minute long and few serve up any kind of test that can’t be overcome in one or two tries, even as the difficulty level begins to ramp up. Conquering each one then rewards you with a random card, which can unlock everything from car part upgrades to blueprints for new vehicles, some rarer than others.

What’s assured, however, is that each reward will push you forward in some shape or form, meaning that opening up your wallet is only really tempting if you want the best parts for your cars from the word go. So vanilla are some of the stages that I found myself purposely trying to make them harder, instigating a drift around every corner to make the short, short tracks more of a hurdle to overcome. 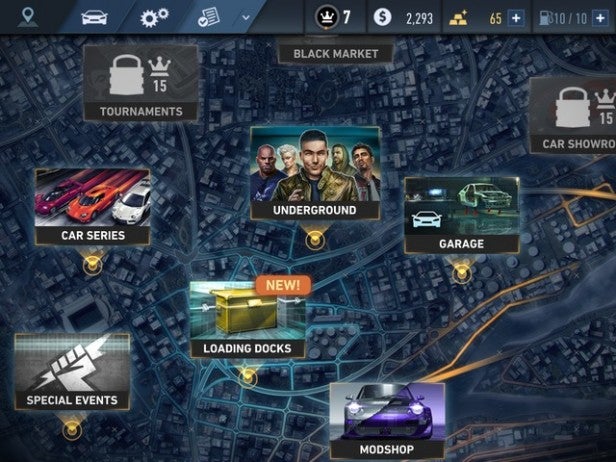 It all means that, somewhat curiously, Need for Speed: No Limits’ biggest weakness is it’s far, far too accommodating. Yes, the setting is generic and there’s nothing remotely new or unique about the world Need for Speed inhabits – it comes with characters you’ve seen a hundred times before and a script you could scribble down on the back of an envelope yourself with very little thought – but the sheer size and scope of the game on offer is signature EA and makes the majority of its rivals look positively minuscule in comparison. It’s just a shame that the game it’s built around massively underestimates its audience at times, presenting the player with a set up that has masses of potential but leaves whole stacks of it lingering in the ether.

Verdict
A consummate arcade racer in terms of the sheer number of modes and options on offer, Need for Speed: No Limits is let down by a lack of challenge that makes entire chapters of play complete non-events, with EA simply underestimating the skill of even the greenest of players to a degree that undermines the game as a whole.