What is the Logitech MX Master?

The MX Master wireless is Logitech’s current flagship mouse, which comes with a spec sheet that’s almost as long as a spoilt child’s birthday wish list. As well as a stunning, ergonomic design, it has a clever speed-adaptive scroll wheel, the ability to connect to three different devices at once and a thumb wheel.

It’s pricey, but the MX Master is great to use and delivers almost flawless performance. 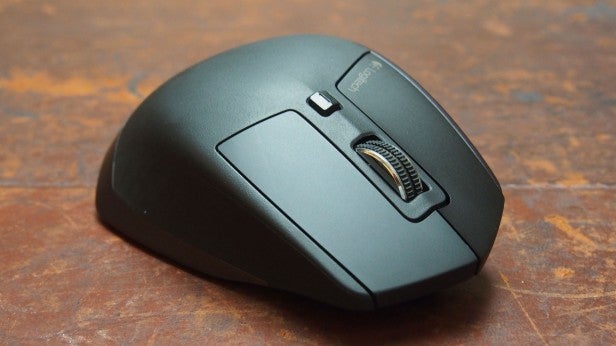 The MX Master is a striking mouse, featuring a funky-looking blend of smooth and gently textured surfaces, and curved, swooping edges. It essentially looks like a classic mouse mounted on an extra piece of plastic that juts out from the left side of the base. An eye-catching mix of metallic gold and matte black, all soft to the touch, is the colour scheme of choice.

This all results in a unique look, but in a really good way. It’s far more visually appealing than most mice, and approaches – dare I say – cool territory. The downside of this, however, is that the Master sticks out like a sore thumb on the average desktop. Our dull grey telephone and clunky keyboard look shabby alongside it, almost like seeing a suited-and-booted David Beckham sandwiched between Paul Scholes and Nicky Butt.

The top of the mouse, which is almost entirely black, features the main left and right buttons, as well as the scroll wheel. At the centre sits a small, square button, called “manual shift”, which controls the wheel. We’ll discuss its role in more depth later in the review.

Far more unusual is the left side of the MX Master. Towards the top is a thumb wheel, which neighbours a pair of long, angular buttons shaped vaguely like arrowheads. Beneath this group is the textured thumb rest, which doubles up as what Logitech calls the “gesture” button. A trio of LED lights that indicate battery life sit just in front of this.

On the MX Master’s underbelly are the power switch, connect button and Darkfield sensor, as well as a circular key crowned by the numbers 1, 2 and 3. This is the “Easy-Switch” control, which allows you to bounce between up to three paired devices with a simple push of the button. Towards the front of the base is a Micro USB port, used for charging. 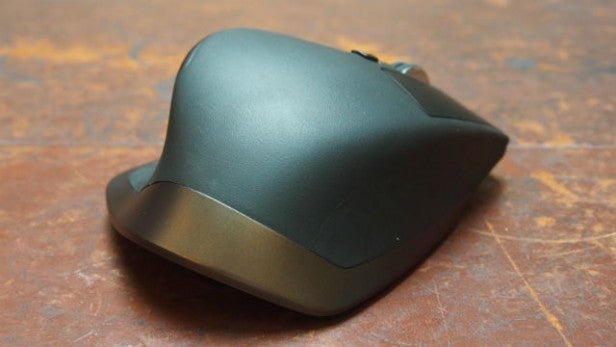 Poorly designed devices can cause just as many problems as they solve. In the worst cases, they can lead to painful injuries, such as carpal tunnel syndrome and RSI. You’re unlikely to face any such problems with the MX Master, however, since almost everything about its design is aimed at maximising comfort. Put simply, it’s great to use, though its dramatic shape makes it very much a mouse for right-handers.

It’s slightly larger than most mice in all dimensions and, at 147g, is close to twice as heavy too. However, these are strengths rather than weaknesses. The Master feels both substantial and stable, making it harder to accidentally nudge with a resting hand.

Odd as it may sound, its larger frame is also finger-friendly. In order to wrap your digits around them, smaller mice force you to adopt a slightly awkward, claw-like grip. The Master encourages a looser, more natural hand position. It supports more of your hand too, though you’ll still need to rest the base of your palm on the table. 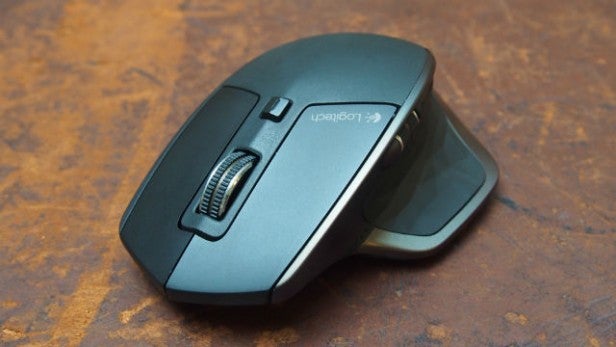 All of the main controls are well positioned and easy to reach, particularly the thumb wheel. However, there are a few issues. The left and right buttons don’t offer enough resistance, making them too easy to push down accidentally. We got used to this within a week or so, but it’s initially very annoying.

On the other hand, the gesture button is actually fairly tough to press, requiring slightly excessive amounts of thumb power. Saying this, we’d rather stray on this side of perfect than the other, since it doubles up as a thumb rest, which would be an almighty pain in the backside if it was too easy to click.

Another gripe concerns the placement of the Easy-Switch button, which is such a central part of the Master’s appeal. Its purpose is to let you quickly switch between devices, but it’s placed on the bottom of the mouse, meaning you have to flip it over to use it. We won’t go so far as to say that this defeats the purpose, but it certainly takes away a great deal of convenience. Being lazy, we sometimes chose to use our laptop trackpad instead of turning the mouse over. 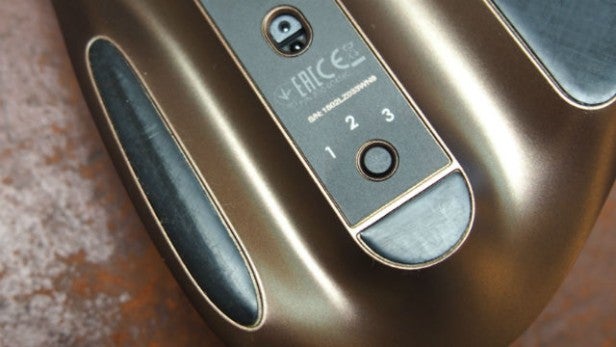 Establishing a connection is a slightly less simple process than usual, as the Master can be paired with up to three devices at once, though it’s still far from complex. Once it’s on, you need to select a channel using the Easy-Switch button, press connect – at which point one of the three numbers will start blinking rapidly – and either pair via the Unifying Receiver or Bluetooth.

Once connected, the flashing will stop and the number you’ve chosen as your channel will remain steadily lit for five seconds. Repeat the process on a different channel to add another device.

At this stage, you’re good to go, but you won’t have full access to the Master’s entire range of capabilities. In order to unlock that treasure-trove, you’ll need to install Logitech Options, which is available on Windows 7 and later, and OS X version 10.10 onwards.

The sheer number of customisation options the program offers is almost overwhelming. You can use it to play around with a whole load of different features, including reassigning button functions, enabling gestures and adjusting scrolling speed. We appreciate the amount of choice on offer, but it’s a bit of a pain to explore all the different permutations. Tailoring the MX is, thankfully, far more straightforward. All you have to do is click on the features you want to change and voila! Sorted. 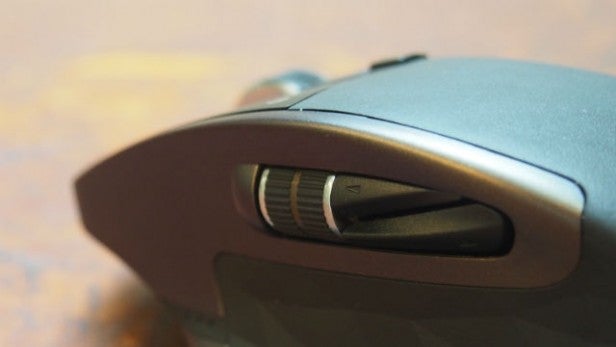 As mentioned above, the MX Master is packed with lots of handy extra features. The Easy-Switch button is one of the niftiest of these. You can connect the mouse to up to three different devices (including tablets) at once, either through the Unifying Receiver that’s included or via Bluetooth. It’s a straightforward process that takes a matter of seconds. By pressing the switching button, you can jump from device to device, which is great for those who make use of multiple screens.

The Master works at a range of 10m (33ft), though we did find that the Bluetooth occasionally cut out at a much shorter distance than this.

The speed-adaptive scroll wheel is another headline feature and, yes, it lets you scroll up and down pages at different speeds. It offers two different modes – click-to-click and hyperfast. The former is that staggered motion you get from all regular mice. It’s precise but slow. Hyperfast mode, which is enabled simply by spinning the wheel quickly or clicking the manual shift button, lets the wheel turn smoothly and freely, allowing you to blitz your way down long pages.

A feature we wish we could have made greater use of is the thumb wheel, which enables you to easily scroll sideways. It works perfectly, and we actually found ourselves hoping to stumble across those usually annoying wide web pages on a more regular basis. The front- and rear-facing arrows next to the thumb wheel work as forward and back buttons. However, we didn’t use them too often, since we’re far more accustomed to hitting our keyboard’s backspace key. 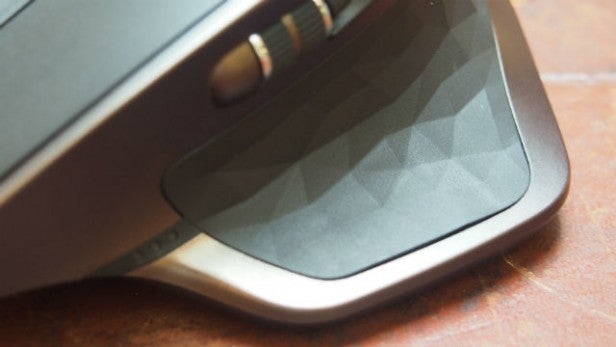 The effectiveness of the gesture button requires you to play with the Logitech Options software, which we’ll discuss in greater depth below. You can choose what it can do, such as switching applications and controlling music, though one of our favourite uses for it is bringing up the Charms bar on Windows 8.

The Logitech MX Master is rechargeable through the Micro USB port on the front. Based on six hours of use per day, Logitech says a full battery will last up to 40 days. While we can’t yet confirm these figures, our unit still has more than a third of its battery left after around two weeks of relatively heavy use. The trio of LED lights on the left-hand side indicate battery life – three greens is high power, two greens is 33-66%, one green is 10-33%, and one red means you need to get your cable out sharpish. The Master is a quick charger too, with a minute at the filling station providing around two hours of playtime.

No matter how many extras it has, a mouse isn’t worth a damn unless it does the basics right. Fortunately, the MX Master leaves nothing to be desired. It’s both accurate and versatile, thanks to Logitech’s Darkfield Laser Tracking technology. This means it also performs flawlessly on notoriously tricky glass surfaces, unlike optical and traditional laser mice, as long as the glass is at least 4mm thick.

It can register speeds of up to 1600DPI, which is nice and speedy. The bottom limit is 400DPI, but you can crank this up in increments of 200DPI. 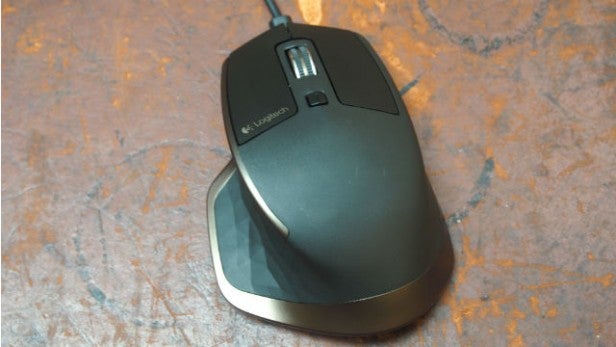 Should I buy the Logitech MX Master?

The MX Master is a lovely mouse that delivers in terms of both form and features. Most importantly, it works almost perfectly. Apart from some Bluetooth connectivity issues, we experienced no major issues with it. It’s accurate, packed to the brim full of handy extras and comfortable to use over long periods of time.

This is reflected in the price. The Master will set you back £79.99, which is more than some consumers would even dream of shelling out on a peripheral. If, however, you have the money to spend and are looking for a little va-va-voom from your mouse, we can hardly recommend it more.

An instantly recognisable mouse that’s great to use, as long as you can afford it.