The MSI X58 Platinum is an unusual motherboard as it is, in essence, a budget X58 motherboard for Core i7, which up until now has been something of an oxymoron. Of course the word ‘budget’ is a relative term and you’ll still be forking out over £200 for this board but, considering many X58 alternatives are priced well above £300, it’s a relative bargain.


At first glance the X58 Platinum looks more like a high end Core 2 motherboard. What gives the game away, though, is the six DDR3 slots that are a new feature to emerge thanks to Core i7’s triple channel memory.


Two PCI Express 2.0 slots are present but they only support CrossFire and not SLI, which is probably the single biggest reason this board costs less than most. If you do have a yearning for, say, dual nVidia GTX 260 graphics you’ll need to consider the MSI Eclipse SLI with its triple graphics slots and full support for CrossFire and SLI. MSI has gone the whole hog with the Eclipse+ which has four graphics slots and an nForce 200 PCI Express chip but we gather that particular model might not make it to the UK. There are of course other options from alternative manufacturers, including the Asus Rampage II Extreme. 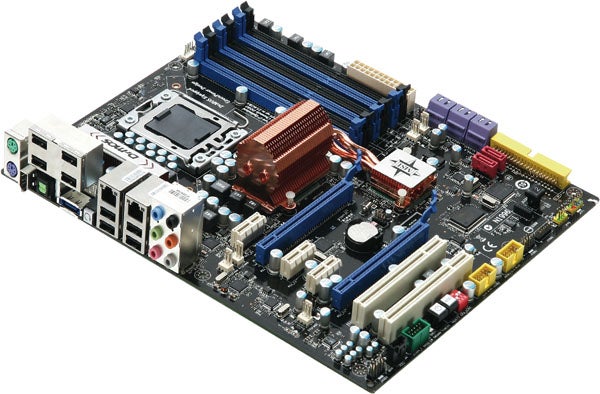 It’s harder to spot the other features on the X58 Platinum that indicate cost cutting but if you know where to look you can see the evidence. The audio is supplied by a Realtek ALC888 chip and has a full selection of mini jack connections as well as optical S/PDIF but no coaxial connection. In contrast, the Eclipse costs nearly £300 and comes with the Creative X-Fi Xtreme riser we’ve seen on a number of high end MSI motherboards in the past.


At the foot of the board there’s an open area, inline with the two PCI slots, where there’s a mysterious button labelled D-LED 2. This is for use with a D-LED 2 gadget that displays debug messages during POST – the button allows you to select which information is displayed as you have a choice of debug or system information. Unfortunately the D-LED 2 gadget is only supplied with Eclipse motherboards and not our X58 Platinum. Presumably it would work fine if you could get hold of the gadget by some other means but we doubt they will be readily available to buy. For the moment, then, it’s just a pointless adornment.

The board is very neat with a passive cooling system that is called a Split Thermal System. It consists of a tiny low profile cooler on the Southbridge that is linked to the hefty Northbridge cooler with a pair of heatpipes. The ‘Split’ refers to the fact that these two coolers are separate from the cooler on the power regulation hardware. We have become used to a string of heatpipes that link every cooler in sight but MSI has used its DrMOS Pulse Width Modulation hardware to increase the efficiency of the power regulation system and hence to reduce the amount of waste heat. The Northbridge of X58 is actually inherently cool in operation, anyway, as it doesn’t contain a memory controller. It’s really only the Southbridge that needs help because of its location between the two graphics slots.


If you feel the need for extra cooling there are five fan headers in addition to the CPU fan which is at least three more than most of us are ever likely to use. Connecting your power supply and storage drives is a cinch thanks to the orientation and location of the connectors on the edge of the board. 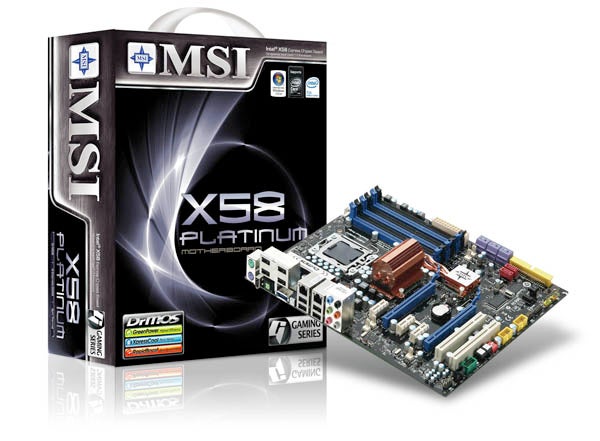 At the foot of the board there are illuminated micro buttons for Power and Reset and next to them is a small red block with three white dipswitches that you can just about see in the photo. This is the Hardware Overclock CPU clock Switch, which is a dreadful name for what is actually quite a cool gadget. It sets the base clock to 133MHz, 166MHz, or 200MHz, to give a quick route to overclocking.


MSI has included a number of handy features in the BIOS including a switch to disable the many bright LEDs on the board. This sounds trivial but it is a blessing to be able to use the LEDs to check that everything is working properly during set-up and then simply switch them off.


Overclockers get a helping hand as the settings you choose only take effect once the BIOS has started so if Windows should fail to start you can re-enter the BIOS to fix the problem. Again, it’s a simple thing but it’s very welcome.


MSI has introduced a new feature called M-Flash that adds a new dimension to the process of updating the BIOS when using a hard drive or USB key as the source for the BIOS file. You can also use M-Flash to boot a second BIOS from a USB key or hard drive to try it out before you permanently install the update. In effect this is the same as the Gigabyte dual BIOS feature without the need for a second BIOS chip on the board.


There seems to be a quirk in the figures as the graphics elements of PCMark05 was 14,500 when we manually overclocked the X58 Platinum. When we used the Overclock CPU clock switch the graphics score leapt past 20,000 marks which is odd but we got the same high score when we retested the Intel DX58SO as a comparison. 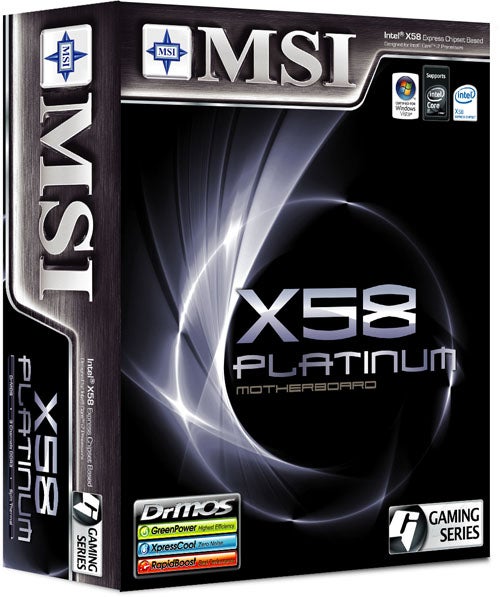 Overclocking manually in the BIOS by raising the base clock figure from 133MHz to 166MHz or 170MHz was quick and simple however we achieved better performance in the benchmarks by using the Overclock CPU clock switch. This was surprising as at first it didn’t seem that the hardware switches did anything different to our manual overclocking process. However MSI tells us that this is not the case. Although the BIOS reports the CPU core voltage it doesn’t dynamically report the other voltage changes that are programmed into the hardware settings. In other words, there’s more going on than meets the eye.


Although the X58 Platinum was able to overclock our i7 965 Extreme to 4.08GHz we found that performance was no better than the Intel DX58SO running at a mere 3.6GHz. We’ll keep an open mind about that as the BIOS installed on our review motherboard was a Beta of v1.2 so there may be room for improvement.


MSI has positioned the X58 Platinum as a budget Core i7 motherboard that still packs a number of features that help the overclocker. Unfortunately, whether due to an early BIOS or an inherent problem, it’s performance just didn’t stack up, which at the moment makes it nothing but a budget board.