It’s been a good few months since we reviewed the Asus Rampage Formula so it seems just about the right time for Asus to bring out a new motherboard called the Rampage II Extreme. However the similarity in model codes is rather deceptive. 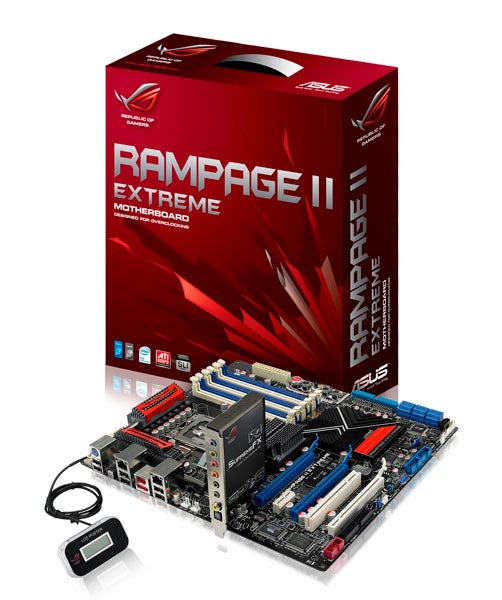 As it happens, we actually missed one of the Rampage range that came inbetween the two above models, which is something of a shame as the Rampage Extreme introduced the TweakIt feature that is carried over to Rampage II. The Rampage Extreme also introduced a passive cooling system that sprawled across the power regulation hardware and both parts of the chipset. We’ve seen radical cooling systems from Asus in the past but each new Republic of Gamers model takes the concept to greater extremes and the Rampage II Extreme continues that trend.


At first glance it looks very similar to the original Rampage Extreme but the list of differences is actually as long as your arm. One significant change lies in the cooling system, but it’s not what you might expect. We’re used to seeing an option for water cooling on the chipset of an Extreme model but the Rampage II Extreme is passively cooled. Part of the cooler can be unscrewed so there is the possibility of adding an adapter for water cooling but the new X58 chipset shouldn’t need that degree of cooling as the memory controller has been moved from the chipset to the Core i7 CPU. Asus includes a small clip-on fan in the package that can be fixed behind the I/O panel but we can’t imagine many people will need to use it. 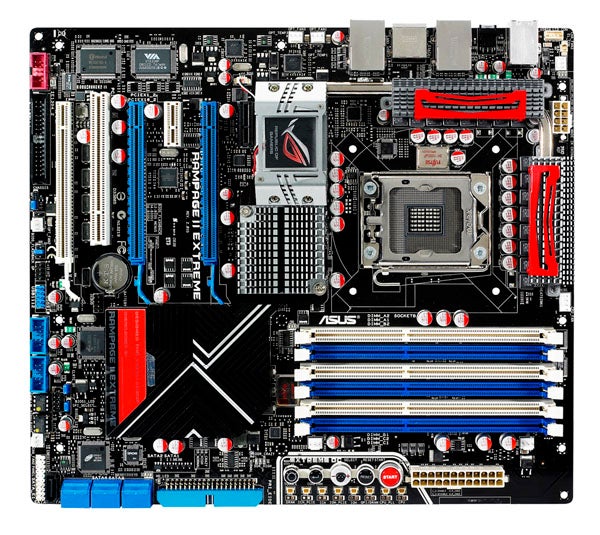 It’s a curious thing but the six DDR3 memory slots don’t make as much of a visual impact as you might expect as your eye is instead drawn to the ProbeIt and TweakIt features. These are horrid names for some cool kit that probably won’t add a great deal of value to the Rampage II Extreme for the majority of users but at the very least they should make you stop in your tracks and wonder at the ingenuity of the Asus engineers.


ProbeIt lines up a collection of solder points outboard of the memory slots where you can directly measure CPU, RAM, chipset and PCI Express voltages with your electrical multi meter. This is very handy if you’re the sort of person who doesn’t believe the accuracy of BIOS settings or the hardware monitoring features that are built into any decent BIOS. There’s no denying that some voltage settings don’t work as expected but if you need to second guess a Taiwanese development team you’re in deep water and should probably stop paddling.

TweakIt extends the functions of the external LCD Poster device. You can use it as a regular POST debug display or you can use it in conjunction with three of the micro buttons to change BIOS settings while Windows is running. The display on the LCD Poster is absolutely tiny and the controls are fiddly when the motherboard is flat on the test bench so the idea of working with TweakIt inside a PC case doesn’t bear thinking about.

The other two micro buttons in the array are the usual Power and Reset, and there’s a Clear CMOS button on the I/O panel.


The expansion slots centre around three widely spaced PCI Express 2.0 x16 slots. They can be used as dual x16 slots for CrossFire or SLI and if you fancy a spot of Tri-SLI the configuration switches to x16 x8 x8. We used our regular GeForce 8800GT graphics card in testing and saw 14,658 marks in 3DMark06. But, just for the heck of it we plugged in a single GTX 280 which raised the score to 19,020 marks and then added a second GTX 280 in SLI for 23,898 marks – and that’s on a Beta graphics driver. 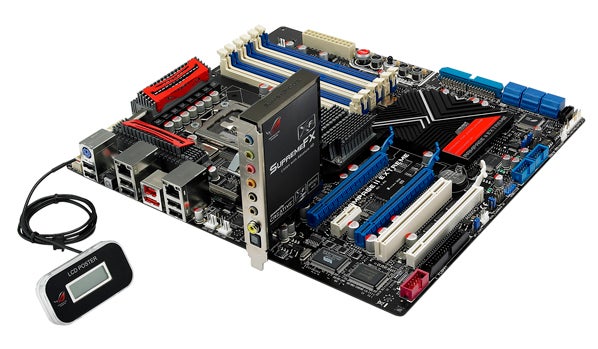 The slot just below the Northbridge is for the exclusive use of the X-Fi audio riser card and there’s a single PCI slot that will be blocked if you use a pair of double slot graphics cards. If you fill the Rampage II Extreme with two or three graphics cards you’ll run out of expansion options but we don’t see that as a problem as the I/O panel is chock full of USB, Firewire and eSATA ports and the ICH10R Southbridge powers six SATA ports with RAID. It’s hard to see what else Asus could bring to the party unless you have a penchant for Serial or Parallel ports.


It’s still early days for Core i7 so we are taking it very easy with the power settings when it comes to overclocking. We ran our Core i7 965 Extreme at the stock 3.2GHz setting and then used the Asus CPU Level Up feature set to i7-crazy-3.60G or i7-crazy-4.00G which changes the memory speed to 1202MHz and 926MHz respectively.

The 3.6GHz setting raises the 133MHz base clock to 150MHz with the multiplier at 24x and the memory at 8x150MHz while the 4.0GHz settings adjusts the clocks to 26x155MHz and memory to 6x155MHz. That’s a very low memory speed of 930MHz but we were able to raise the memory speed one notch to 1,232MHz (8x155MHz) without any trouble. The results were very impressive but we had to spoil things by raising the multiplier further to 27x155MHz whereupon the system froze and it became clear after a restart that Windows was completely and utterly broken. Once we had nuked the hard drive and reinstalled Vista we were able to give the Core i7 920 a whirl and let’s face it, you might consider buying the 920 for £270 but the 965 Extreme is out of reach at £880. The Rampage II Extreme BIOS is intelligent enough to spot the change in CPU and adjusts the CPU Level Up options to 940-2.93GHz and 965-3.20GHz. 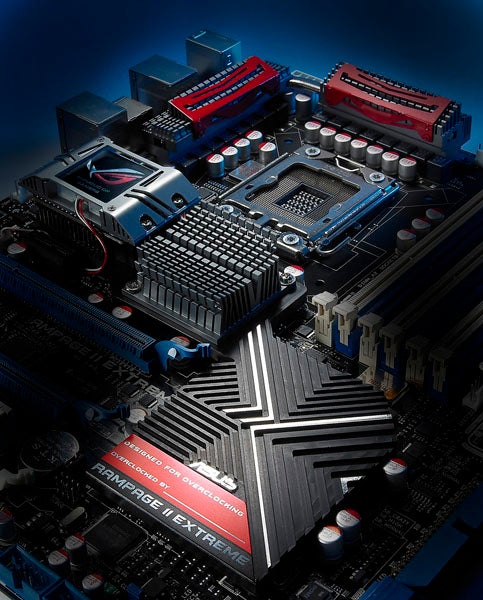 When we had finished testing we reset the BIOS to Auto settings and … broke Windows. This time we were able to use the installation DVD to go back to a restore point but it’s not the sort of problem we expect to deal with when we’re returning to standard clock speeds.


Our test results were achieved with the Asus CPU-6 power saving software running in maximum performance mode. Switching to maximum power saving made a significant difference to the power draw, reducing the figure from 190W to 150W under load, but it crippled performance by some 50 per cent. The 3DMark06 figure for the GeForce 8800GT dropped from 14,658 to 10,037 with power saving enabled so we strongly suggest you only turn power saving on if you are absolutely certain that you’ll remember to turn it off when you want to play a game or recode a movie.


And so we come to the price. This is a hugely expensive motherboard that carries a premium of some £50 over the original Rampage Extreme which in turn was horribly expensive. The thing is you’ll be spending at least £235 on an X58 motherboard as that is the price of an Intel DX58SO and closer to £300 for a Gigabyte or MSI so every X58 motherboard is expensive. It’s just that the Rampage II Extreme is more expensive.


This is a lovely motherboard that delivers everything you need as well as a few features that are frivolous. Our only reservations centre on the occasions when we broke Windows Vista and, yes, that astronomical price.