The latest AMD-branded board from MSI tries to tick every box for £130/$167. Its SLI designation is designed to appeal to gamers who want to run more than one graphics card, but it’s a Plus-branded board too – so it’ll have features and testing to ensure that it’ll feel at home in a work rig, too.

It’s easy to find gaming motherboards that are littered with lights and ridiculous heatsinks, but it’s tricky to make a professional-grade motherboard stand out.

Despite that fact, MSI has done it with the X370 SLI Plus: its black PCB and heatsinks are accented by bright metal arranged in diagonal, angular sections, with the same coloured metal used to anchor the two main PCI slots that help give this board its name.

The businesslike design gives a clue about this board’s feature set. It supports 3200MHz DDR4 memory and has trios of PCI-Express x16 and x1 sockets. Two of those PCI-Express x16 slots help support three AMD GPUs and two Nvidia cards – entirely standard for modern, mid-range motherboards, even though on this board it’s a headline feature. 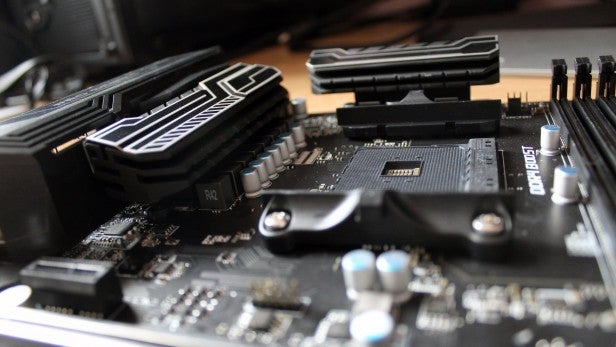 There’s a single M.2 slot – one fewer than many Intel boards offer – and six SATA connectors.

The MSI’s aesthetics are businesslike, and the board’s layout is unfussy. I’m pleased to see six fan headers scattered around the board, including one for water pumps, and the heatsinks aren’t big enough to interfere with coolers. I would have preferred colour-coding on some of the headers, though, and almost all of them aren’t shielded with a plastic surround – so they’re easier to break.

The lighting situation is underwhelming too. There aren’t any LEDs on this board – just red lights around the back of the board. At least there’s a header, so lighting elsewhere on the machine can be controlled through MSI’s software.

The backplate is well-furnished with four USB 3 connectors and both Type-A and Type-C plugs, and there are six audio jacks – more than most motherboards. There’s also a PS/2 connector for your retro peripherals. 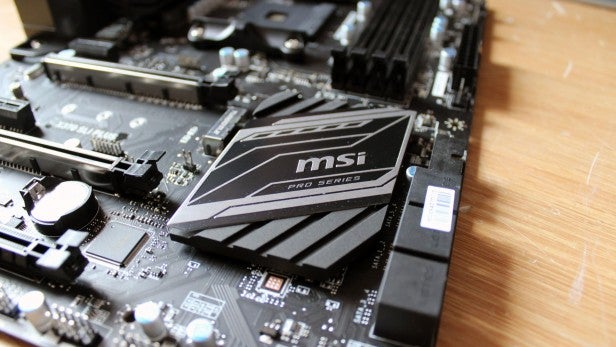 The entire board is underpinned with the AMD X370 chipset. I’m pleased to see this here, because it allows MSI to include multi-graphics capability for both AMD and Nvidia – the next chipset down, B350, eliminates Nvidia support.

That’s not the only area where the chipset impresses. No other AMD Ryzen silicon has this much support for SATA and USB ports, and it has more PCI lanes than any other new AMD part.

This board is designed for work and play, so I was happy that it proved to be one of the more consistent offerings in benchmarks.

Its single-core application result of 4509 is mid-range as far as AMD boards, and its 23,646 result in the multi-tasking test is the best I recorded from an Ryzen board. That bodes well for work, because it means any PC that uses this board will be able to handle intensive multi-threaded applications and high-end multi-tasking.

Its SATA storage results of 515MB/s and 514MB/s are fine, too – a few megabytes behind the quickest boards, sure, but more consistent than most.

The MSI’s gaming result of 6916 is only mid-table, but that’s fine. It’s not slow enough to cause problems, and it won’t be noticeable during gameplay.

This board’s final tests, power consumption, saw the MSI return to the top of the able. Its idle power draw of 57W is only one Watt more than the most frugal AMD board, and its 116W peak requirement was three Watts lower than its nearest challenger.

The MSI isn’t the loudest or most extravagant board, and it doesn’t have high-end features – but it does get the important things right, which means it’s ideal for building all sorts of systems.

That versatility extends to the benchmarks. It’s solid in every department, and its multi-tasking and power consumption figures are a particular highlight.

This isn’t the board to buy if you want to save money or build an ultra-specified machine, but it’s perfect for a mid-range or high-end PC that’s going to be used for a wide variety of tasks.

MSI’s board balances a good range of features with consistent and solid performance, although it’s never going to offer everything that enthusiasts require. Still, if you’re after a capable board with a broad range of mainstream features, this is superb.