The MSI MPG Artymis 343CQR has fantastic image quality and a wide, curved design that lends itself to absorbing single-player gaming in every genre. It boasts great build quality and loads of clever gaming features. But it’s not cheap, and its size and colour abilities mean it’s not suited to esports fans or people who need a display for colour-sensitive workloads.

The MSI MPG Artymis 343CQR is one of the most ambitious curved gaming monitors on the market, with a 1000R design alongside loads of high-end features – but with more curved displays arriving, that means big competition.

Regardless of the number of rivals, MSI is confident that the Artymis 343CQR can compete thanks to its curvature, resolution, and refresh rate.

Design and features – An incredible feature set, especially for gaming

The MSI MPG Artymis 343CQR’s standout feature is the 1000R curve, and it makes a significant impact – the tighter radius does a better job of wrapping around the user than 1800R and 2300R panels, and it makes gaming more immersive because the screen is more attuned to the curvature of the human eye.

The 1000R curve pairs with a 34-inch diagonal, a 21:9 aspect ratio, and a 3440 x 1440 resolution. The curve and the width increase immersion levels, and the width also means the curve isn’t too tight, which can be the case on 16:9 displays. The resolution delivers a density level of 109ppi, which is pleasingly crisp – only 4K panels are sharper.

It is, in short, a great design. The curve and width supply an absorbing view in racing games and flight simulators, and I get more vision in FPS and RTS games – plus a bigger view of the world in adventure and RPG titles. It’s consistently beneficial. 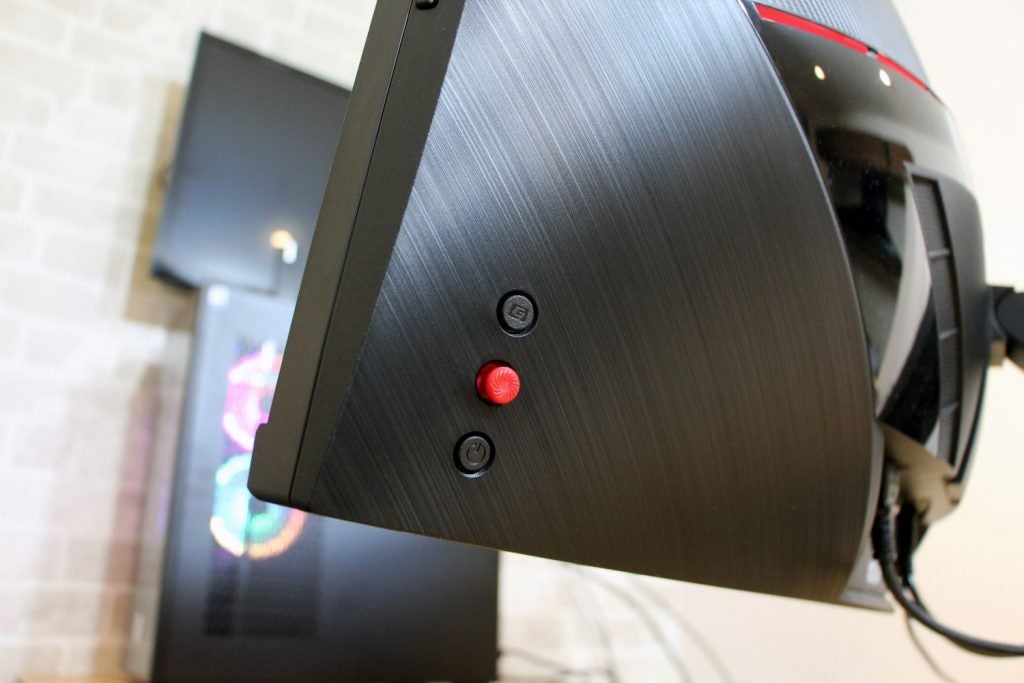 If you’re a high-end esports player, though, this display is not suitable: moving my head to look around can cost vital seconds, and higher resolutions make it harder to hit higher framerates.

Regardless of the games you’re going to play on this panel, you need to make sure that you’ve got a graphics card like the Nvidia RTX 3070 or RTX 3080 to handle all of those pixels.

A curved widescreen is potentially great for productivity too – but not always. While the width and resolution give you loads of on-screen real estate, the curve can cause some image distortion that means the MSI isn’t suitable for colour-sensitive workloads. 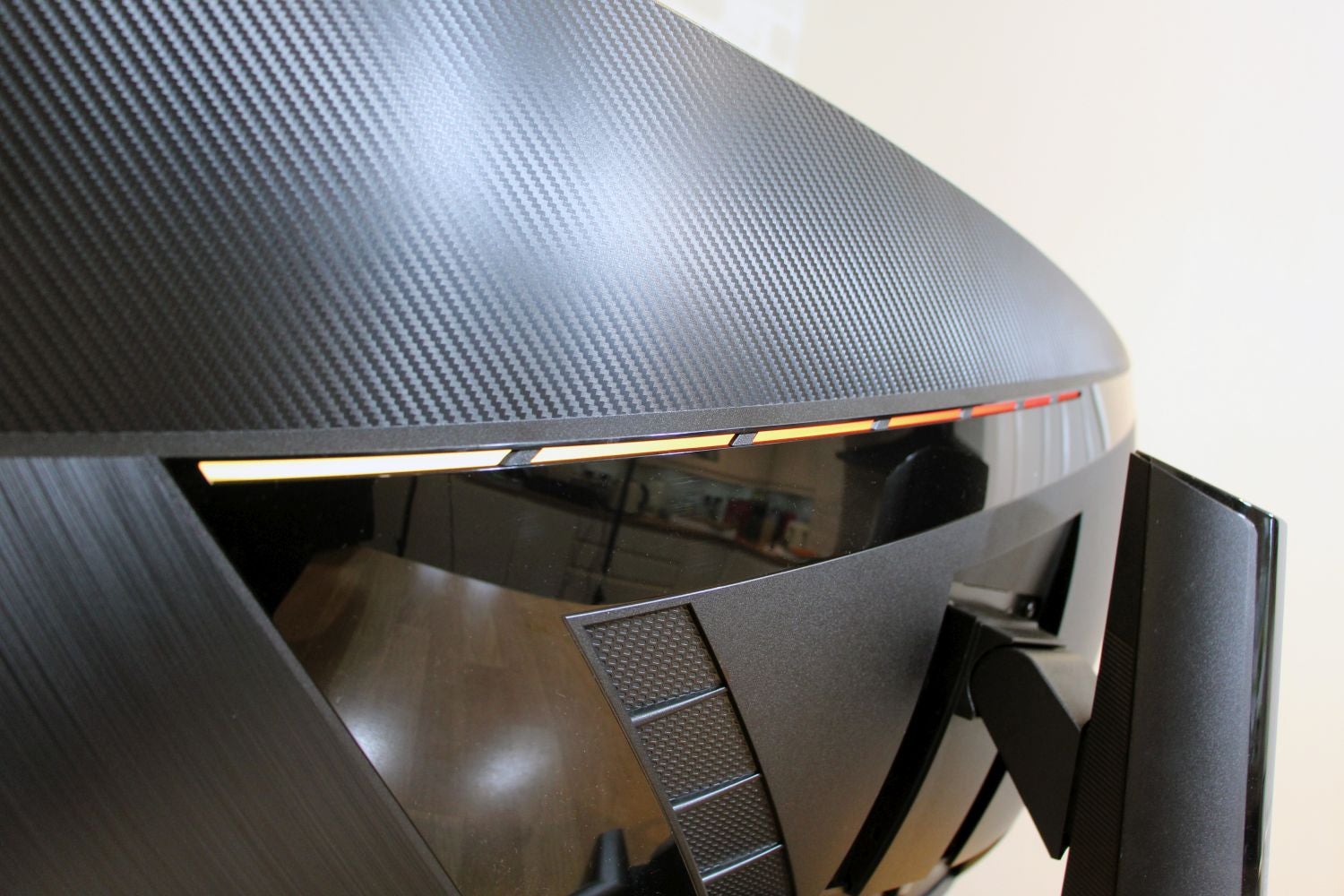 Underneath all of this is a VA panel with 10-bit colour and a 1ms response time, which should ensure fantastic contrast and ample speed.

The MSI has brilliant build quality, with no wobble or panel movement. It’s not light or small, though: it weighs 9.2kg and is 315mm from front to back, so you’ll need plenty of desk space.

It looks great, with wide legs and RGB LEDs, and it has slim bezels. If you’re flush with cash, you could use three of these monitors to provide a real wraparound experience. The MSI has height adjustment alongside swivel and tilt movement, which is normal for a widescreen.

There are few issues with this display physically. The stand movement can be stiff, and the panel does have two USB 3.2 ports and a Type-C connector, but that USB-C socket doesn’t offer power delivery. The MSI also has no speakers, but most gamers will use a headset or external speakers. 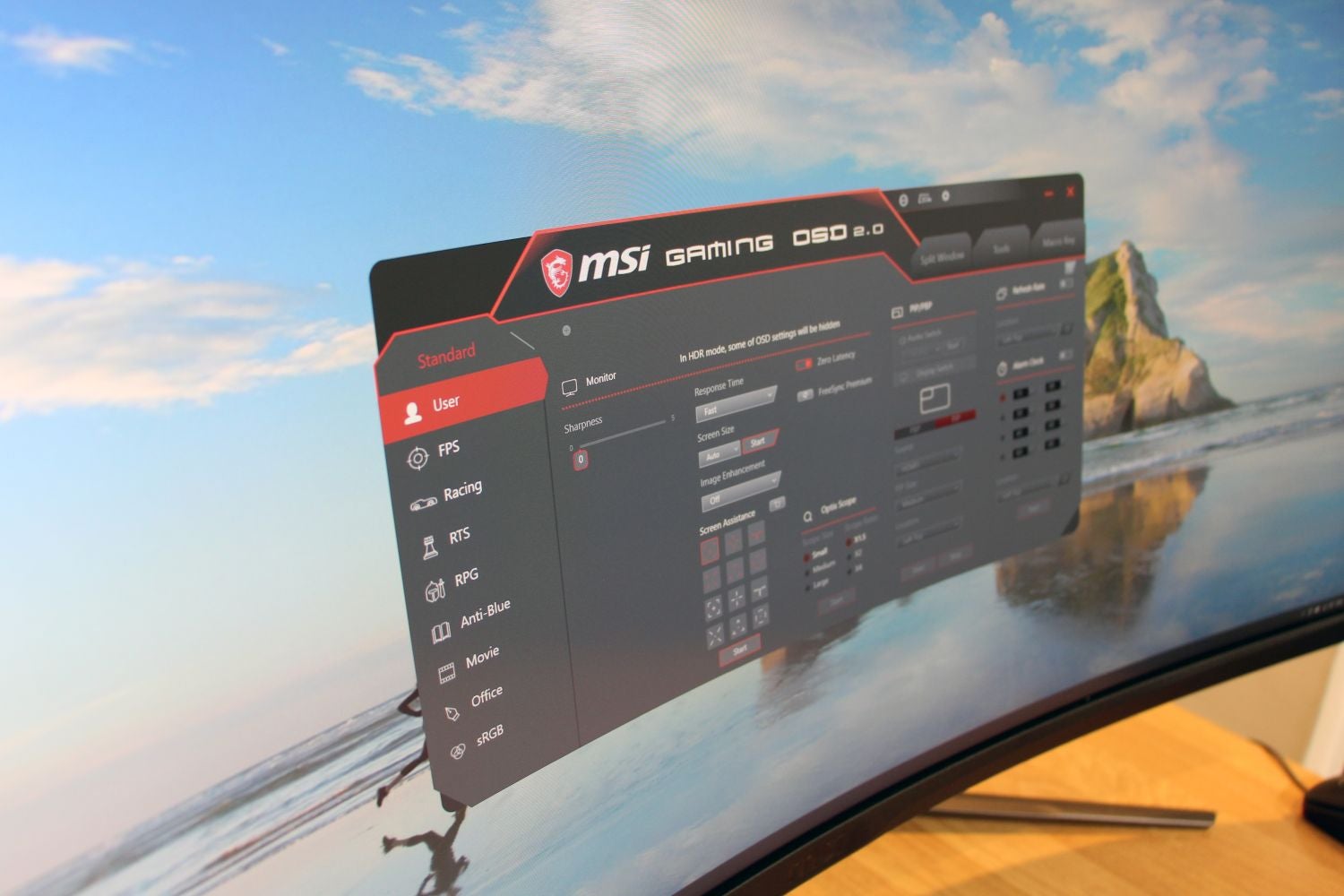 The Artymis 343CQR is feature-packed when it comes to software too. The on-screen display is comprehensive, with a row of key information always displayed. MSI also offers an app called Gaming OSD, which replicates the on-screen display in Windows, making the display far easier to manage.

I can layer crosshairs and framerate counters on the screen and even have the centre of the display magnified for better aiming. The MSI also automatically switches to 1080p when I connect it up to a console. It’s convenient, but it does create black bars down the sides of the screen.

The MSI goes beyond its rivals in several departments. Samsung’s display is smaller and has a more conventional resolution. It has similar adjustability and build quality alongside more accommodating graphics card requirements, but it doesn’t have as many gaming features. The larger LG needs more graphics power, but its gentler curve means it’s more suitable for work and gaming.

The MSI MPG Artymis 343CQR offers contrast that’s three times higher than the average IPS display, helping it to deliver images with loads of punch and depth. Out of the box, the MSI’s brightness of 202 nits combines with a 0.06-nit black point for a contrast ratio of 3367:1, which is fantastic.

Colour accuracy is great, too. The Delta E of 2.07 is at the point where eyes won’t notice inaccuracies, and that’s easily good enough for gaming. The colour temperature of 6518K is virtually perfect.

The MSI renders 99.1% of the sRGB gamut at 120.1% volume, which means every shade on the sRGB gamut is bright and bold. Elsewhere, the MSI handles the DCI-P3 gamut at a reasonable 85.1% but only rendered 79.6% of the Adobe RGB gamut.

Those accuracy, contrast, and sRGB coverage results mean that games look fantastic in SDR mode: punchy, bold, and engrossing. However, this monitor isn’t capable of handling colour-sensitive workloads so this isn’t a good monitor option if you want it to double up as both a gaming and content creation panel. 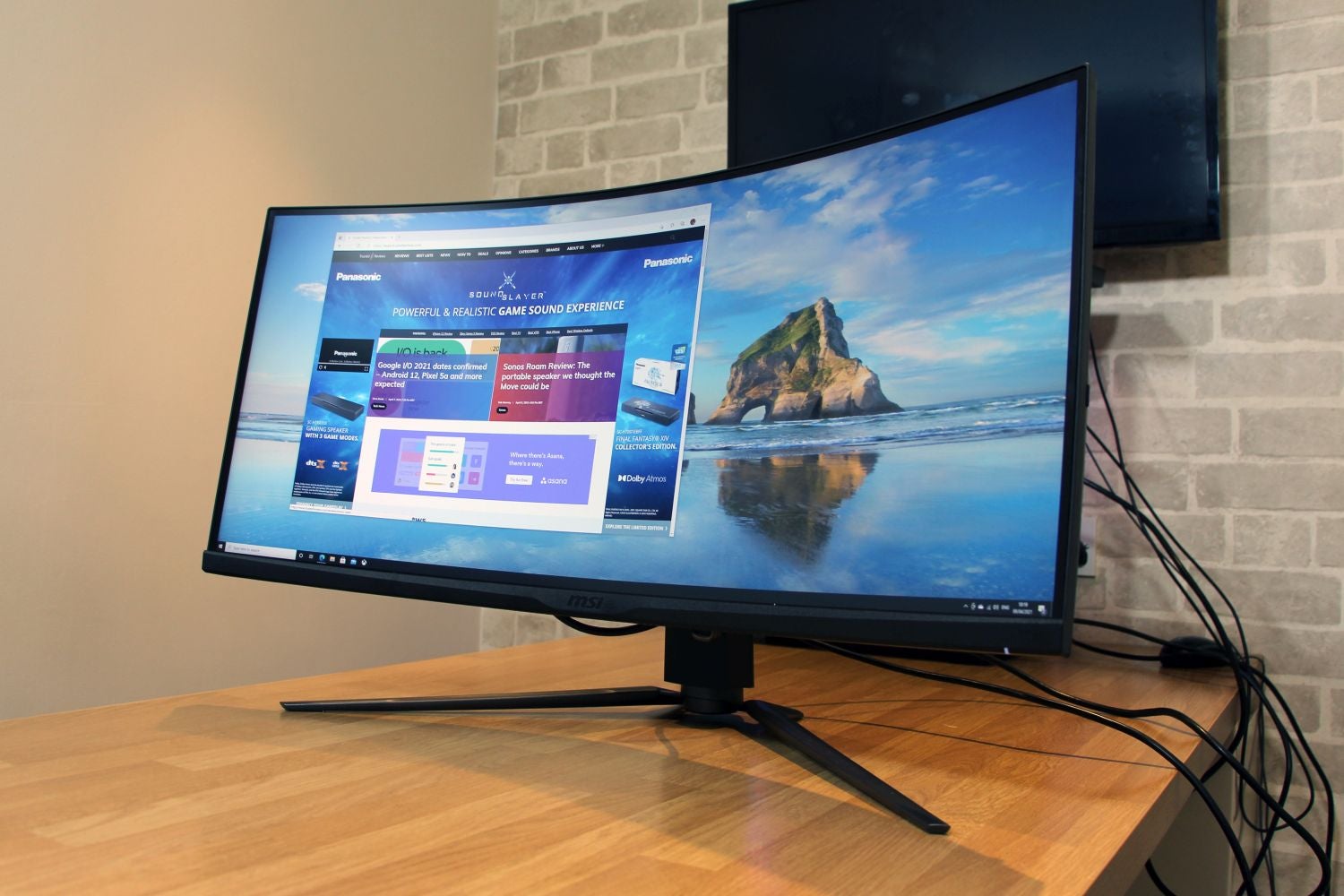 On the plus side, the MSI is one of the best mainstream HDR monitors around. In HDR mode, the MSI hits a peak brightness of 578 nits and a revised black point of 0.03 nits, which means a contrast level of nearly 20,000:1. That’s fantastic, and it means you get a significant boost to HDR games and movies on this display, with extra punch and depth.

The only way you’ll get a significant HDR gain beyond the MSI is by spending more on a display with dimming zones or OLED technology, which will provide more nuance and subtlety.

The 165Hz refresh rate delivers smooth gameplay in single-player titles, and it’s easily good enough for mainstream esports. There’s slight haloing on fast-moving objects, though, and the overdrive levels aren’t good. These minor issues and the moderate refresh rate mean that you should opt for a 240Hz panel if you want to play high-level esports games. 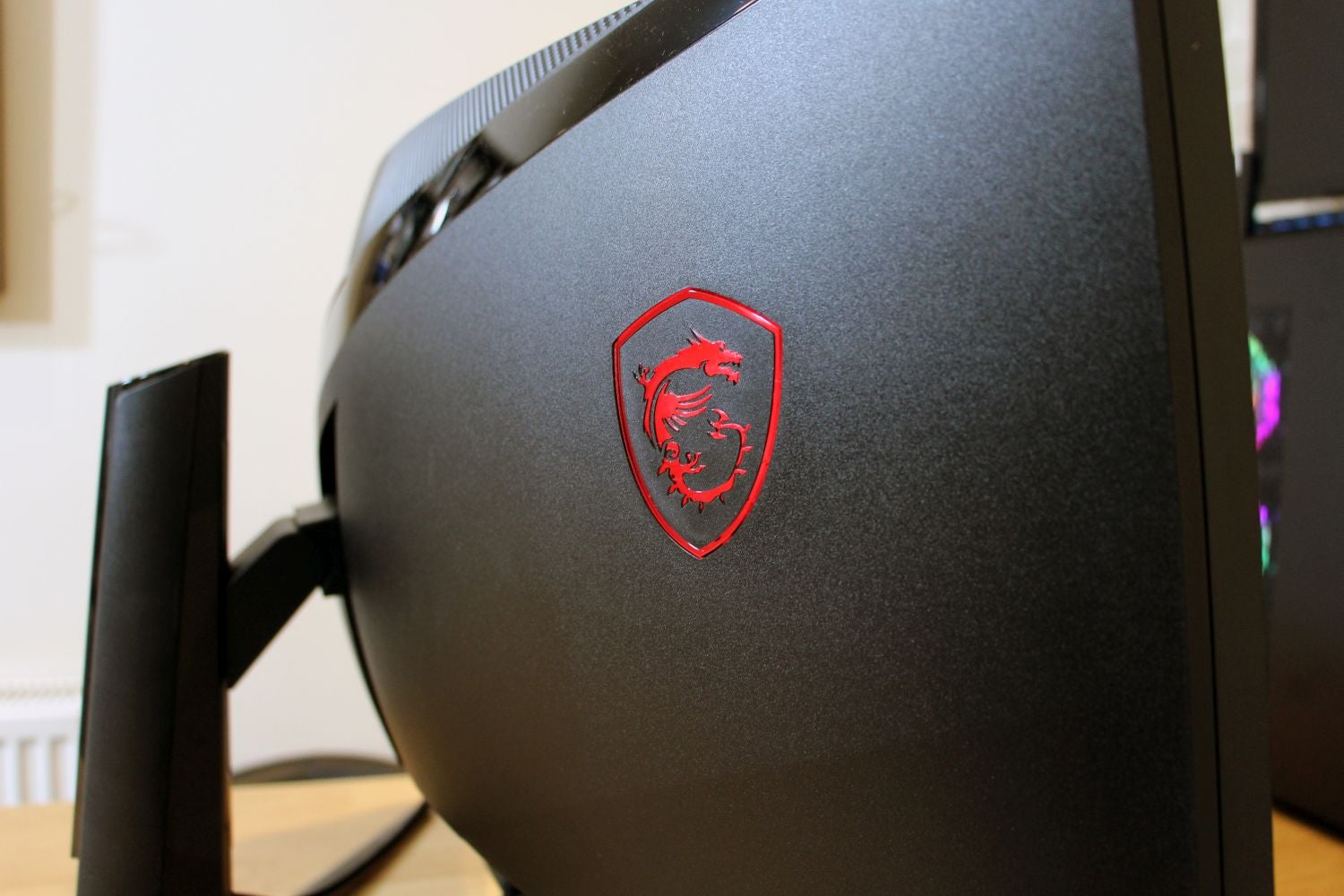 The rest of the MSI’s performance criteria are largely impressive. Uniformity levels are good, and viewing angles are consistent if you’re positioned properly. There’s only a tiny bit of backlight bleed, and it’s not enough to cause issues. The 1ms response time is quick enough for any game, and input lag is decent. Again, only the most demanding esports players will want more than the MSI can offer.

The MSI performs well against rivals. It’s better than the Samsung when it comes to image quality, and it beats the LG for HDR performance. LG’s display is better with colours, though, so it’s superior for certain workloads.

The MSI MPG Artymis 343CQR is a brilliant gaming monitor. It’s got tremendous image quality in SDR and HDR modes, so it’s a versatile option for big-screen gaming, and it has a bold, absorbing design with great quality and features.

There aren’t many downsides. The curve, size, and refresh rate won’t suit esports players, and you’ll need a powerful graphics card to enjoy this screen. The MSI isn’t quite good enough for colour-sensitive workloads either.

For most gamers, though, it’s fantastic – big, immersive, and impressive, with brilliant quality and performance.

You should buy the MSI MPG Artymis 343CQR if…

You shouldn’t buy the MSI MPG Artymis 343CQR if…