What is the Morphy Richards 400015 Total Control Stand Mixer?

Conceived as a stand mixer for inexperienced cooks, the Total Control aims to take the guesswork out of baking.

Its Smart Response Technology delivers in two ways, with six preset speed and pause programmes for typical tasks – such as cake batter, bread dough and whipping – and on manual settings by feeding power gradually before building to your chosen speed. Three tools, a tool splashguard and a bowl cover keep mess to a minimum, while simple recipe ideas are included to get baking newbies started.

The design of the Total Control matches its approach to conquering basic techniques. Fuss-free, with no awkward niches to wipe down, it’s plain but practical.

Every feature is geared towards being easy to use, from the mains switch at the side that prevents accidentally it turning on, to the clearly marked head-release lever. Its control dial follows suit, with six labelled speeds plus 0 and pulse, and a start and pause button (although it only pauses programmes). 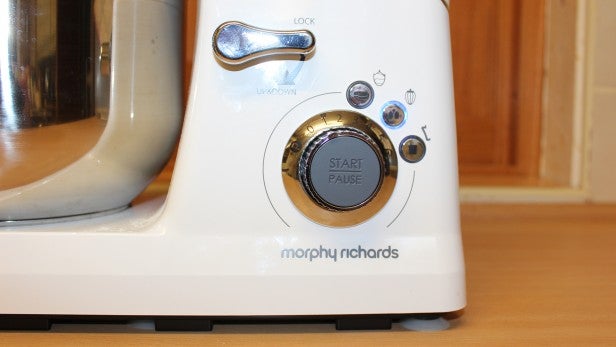 Above, three buttons each serve as two programmes: “Cake” for making batter or buttercream with the beater; “Egg” for whites or double cream with the whisk; and “Bread” as white or granary with the dough hook.

A bowl cover with an opening for adding ingredients pushes onto the mixer head before fitting each tool. Unlike the usual push and twist motion for stand-mixer tools, each screws into the mixer with a separate splashguard above.

Morphy Richards 400015 Total Control Stand Mixer – What’s it like to use?

Setting up the Total Control was initially a little fiddly. The bowl cover had to be attached first, and although it had rubber fittings to keep it in place, it had a tendency to fall off when the mixer head was raised.

The tools were also tricky; the tool splashguard fits above the tools and got in the way when we were  screwing in the actual tools. However, after a bit of practice, swapping tools became easier.

We started by making gingerbread using manual mixing and the beater. Adding flour, spices and butter to the bowl, we started mixing on speed 1 before raising it to 2 once the butter started to be worked in to the dry ingredients.

The bowl cover came in handy to keep the flour from puffing out of the bowl, and, once the mixture had reached a breadcrumb consistency, the cover’s opening was useful for adding sugar gradually.

A few lumps of butter that hadn’t been combined remained, so some finishing by hand was required. Adding an egg and syrup, we turned the machine up to 4 to knead the mixture together into biscuit dough. This took a little while, but even with a stiff mixture at a high speed the appliance stayed stable on the worktop.

Attaching the hook, we used it to make bread dough. The bowl’s generous size was useful here since it has the capacity for two or three sizeable loaves.

Adding all the ingredients to the bowl, we used manual mixing to combine them initially, before switching to the automatic Bread no 1 programme.

Selecting the programme was easy – the button lit up, then we turned the control dial to 1. This kneaded the dough for 10 minutes on a low speed, making it a far easier process than doing it by hand.

Once the programme had finished, the machine stopped by itself. The dough was beautifully elastic and consistent, and rose well when baked. 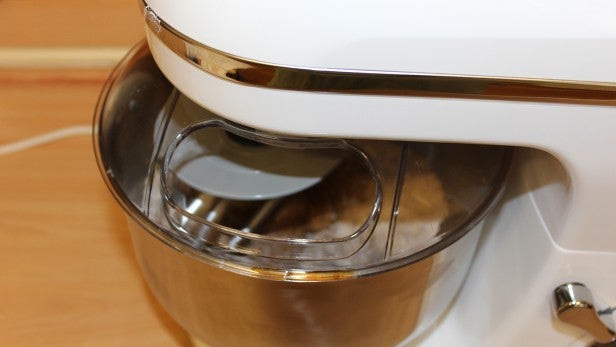 We finished by whipping three egg whites on the automatic Egg no 1 programme using the whisk. This programme ran for just over 4 minutes at a high speed.

Although the whites were creamy once the programme was complete, they weren’t quite stiff enough to use for meringue; when the bowl was tipped, the mixture slid to one side rather than staying rigid. Another minute of manual mixing was required for them to reach a firmer consistency.

None of the attachments, bowl cover, splashguard or bowl are dishwasher-safe, so they all needed to be cleaned by hand. For the most part this was straightforward, although some biscuit dough was difficult to extract from the crevices of the beater. 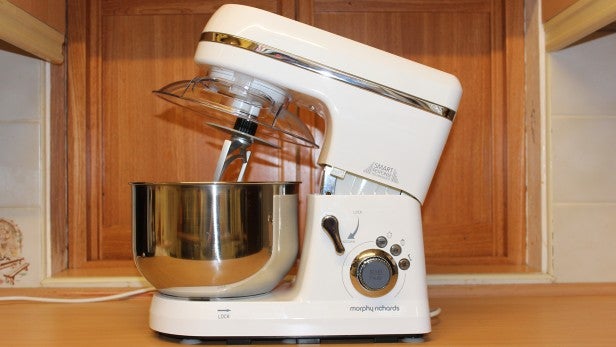 Should I buy the Morphy Richards 400015 Total Control Stand Mixer?

Beginner bakers will appreciate what the preset programmes offer – especially labour-saving settings such as the one for making bread dough. However, this mixer isn’t for keen cooks who may find the number of actions needed for swapping tools and settings slows them down.

Also standing against this mixer is its larger size, which makes it bulky to store, and the fact that it can’t be cleaned in a dishwasher.

However, if you’re after a simple mixer that’s capable of completing most jobs without needing an experienced eye watching over it, then the Morphy Richards 400015 Total Control Stand Mixer is a good fit. And it won’t break the bank, either.

Taking up baking as a hobby and on a budget? This is an ideal place to start.