At the opposite end of the scale to costly stand mixers such as the KitchenAid Artisan comes this highly affordable alternative. It’s simple glossy black design is packed with handy features for the price: non-slip feet, a 3-litre capacity in a 4-litre bowl, three tools and even a splashguard. While basic mixers often lack power and speed options, this model includes a decently sized 800W motor and 12 speeds to handle a variety of baking tasks.

The shape of the stand mixer might not steer far from the norm, but it’s neat and functional. Fans of bright colours will be disappointed to learn that it’s available only in black, but chrome-effect highlights on the control dial and mixer body add some interest.

Those with smaller kitchens will benefit from the Wilko Stand Mixer’s slightly compact dimensions compared to full-sized models. Its stainless-steel bowl has flat handles at either side to help lift it out, but the base – which locks into the stand mixer – is made of plastic and so may wear over time.

On the underside of the mixer, non-slip sucker feet keep it firmly planted on the worktop (although the sample we tested had only three feet instead of four), and a flick switch on the front raises and lowers the mixer head.

Although the control dial features only alternate numbers for the speeds, it runs at those in-between, too. A slide-on plastic splashguard and three tools – a stainless-steel whisk, non-stick beater and non-stick dough hook – complete the package. Note that none of these tools is dishwasher safe.

A key downside to this machine is its maximum run-time. At only seven minutes, with a required rest of 20 minutes between loads, it’s sure to slow down heavy users. 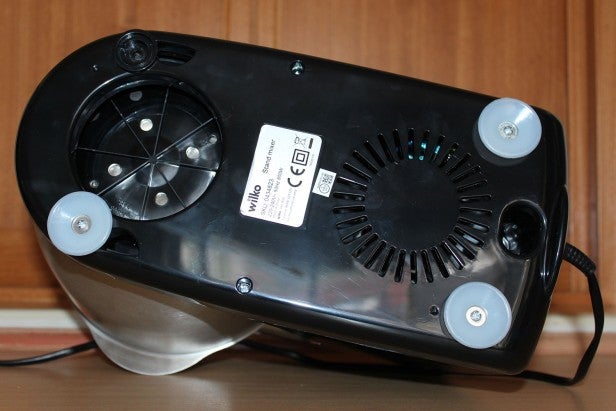 Switching the tools on this stand mixer is achieved via a straightforward push and twist motion – but it requires a little practice to make sure each is securely locked in place. In addition, the flick switch for raising and lowering the mixer head is a bit clunky and prone to sticking.

We started by making focaccia dough, using a large quantity of oil with a standard bread mix. Placing the ingredients into the bowl was easier while it wasn’t attached to the machine, since there isn’t a lot of clearance when it’s in place, even when the mixer head is raised.

After attaching the dough hook and lowering the head, we started combining the dough on speed 2, raising this to 4 once the mixture had come together. The recipe suggested kneading for 10 minutes but we were limited to 7 minutes, after which time the mixer head was noticeably warm to the touch. After kneading, the dough was elastic and of a suitably wet consistency. It proved and rose well as it baked.

Next, we made a cake batter using the beater with the splashguard, which slid onto the top of the bowl (it’s not possible to attach this to the mixer head, so it needs to be put on and removed for each cycle of mixing).

Adding flour, beaten eggs and melted butter, honey and sugar to the bowl, we used speed 6 to initially combine the mixture, then raised this to 8 to aerate the batter.

While on the surface, the planetary motion of the beater appeared to be producing a smooth consistent mixture, once this was poured out from the bowl into a tin, it transpired that there was a clump of unmixed flour beneath, indicating that the beater hadn’t reached all the way to the bottom of the bowl. This required pouring the batter back into the bowl and some hand mixing to finish.

We finished by using the whisk to whip four egg whites on speed 12 to make meringue. This took about five minutes until they were stiff and formed peaks.

At this speed the mixer is noisy, but the non-slip feet helped it to stay steady on the worktop. Adding sugar, cornflour and vanilla extract, we continued whisking for another minute or so, until the mixture was smooth and glossy. The meringue lost some of its volume while baking, but it still emerged crisp with a soft, fluffy centre.

While all the accessories require hand-washing, they were reasonably straightforward to clean, with only the whisk having a few awkward crevices to wash.

While using this stand mixer will still be faster than whipping or mixing by hand, it lacks the precision and build quality of pricier models. Since dough and batters may sometimes require a helping hand, it probably isn’t suitable for a beginner baker.

That aside, if you’re an experienced baker on a tight budget, or just not sure how much you’ll use a stand mixer, its price tag makes it a great way to dip a toe in the water.

The Wilko Stand Mixer is good value, but can be disappointing compared to more expensive models.