Are speakers the new docks? Certainly a combination of Apple’s new Lighting connector, emphasis on AirPlay and the failure of Android docks to gain momentum has seen speaker manufacturers return to more traditional designs – but happily they’re coming with new tricks. Monitor Audio’s ‘WS100’ desktop speakers are a perfect example of this. The British audio specialist wooed us with the superlative https://www.trustedreviews.com/monitor-audio-i-deck-200_Portable-Audio_review i-deck 200 dock at the start of last year and now it is starting off 2013 in similarly fine fashion. 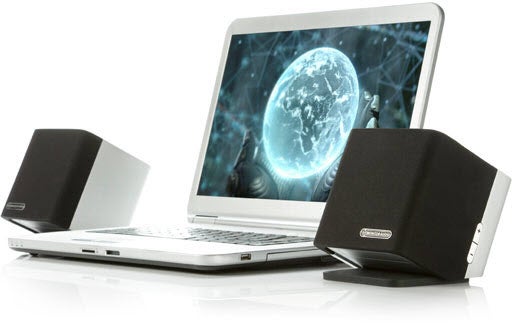 None of this is particularly evident when you first take the WS100s out the box.  At first glance they are subtle and fairly unassuming. Like the i-deck 200 they retain the same mix of black and grey colouring, but depart from the curved (and frankly, controversial) styling of the dock and are instead fashioned into squat cubes with tilting bases that each measure 120 x 120 x 125mm. At 1.8Kg each speaker is surprisingly weighty, but build materials are a significant part of this with a heavyset construction that bodes well for durability and a beautiful (if fingerprint attracting) mirrored glass top. Needless to say the weight also keeps the speakers dutifully in place and hints at the density of technological wizardry inside (more of later).

Where things get interesting is at the back of the right speaker. Both speakers are amplified, but right is dominant with the main power connector along with an auxiliary-in 3.5mm jack plus the more mysterious ‘SKAA’ button and corresponding LED – this is where the new tricks begin. 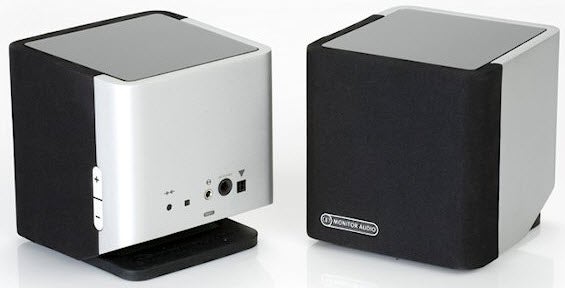 SKAA is a new wireless audio standard which transmits at lossless quality over the 2.4GHz radio frequency with no detectable lag. It employs ‘Walk Frequency Diversity’ (WFD) to avoid conflicts with other wireless devices and allows a single music source to stream to up to four pairs of WS100 speakers simultaneously. The upside is the potential of full home audio coverage, the downside is it inevitably requires a dongle at source.

To this end Monitor Audio supplies a SKAA USB dongle with the WS100 which is plug and play in the best sense of the world, automatically setting up without drivers. It is small and smartly angled upwards to minimise the chance of it being snagged and improve reception which we found to be roughly 10 metres – even with a wall in-between. Meanwhile dock connector, Lighting and microUSB dongles will be released at a later date. SKAA doesn’t quite match the flexibility of a https://www.trustedreviews.com/search/reviews?q=sonos&Brand=Sonos&date_range=d4 Sonos system which needs no dongle and can toggle each speaker level at source, but it is highly appealing nonetheless. 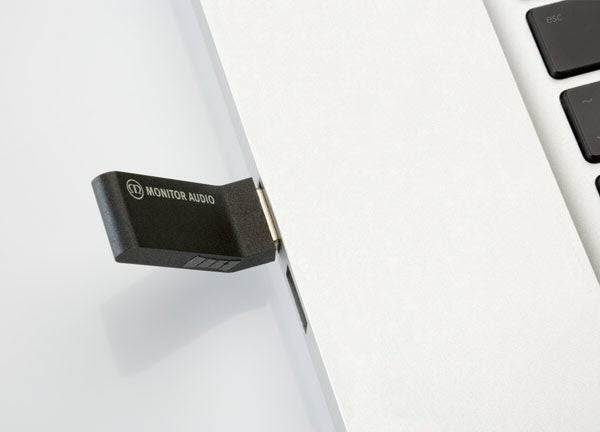 A further rarity for a set of desktop speakers is the inclusion of a remote control. This is identical to the remote supplied with the i-deck 200 and i-deck 100 and features an appealing curved design that sits nicely in hand, though wobbles irritatingly when placed on a flat surface. The usual power, play/pause and skip functionality is included along with a source button to switch between wired and wireless connections.

Interestingly when we say the remote is ‘identical’ to the one supplied with the i-deck range we mean it as we found we were able to control all these products with a single remote. This is a potentially useful quirk for owners of both products, but makes you focus on pointing at the right one. For times when the remote isn’t handy, the WS100 right speaker has volume controls on its side and pressing them both simultaneously will switch sources.