Due to circumstances best left unmentioned, ‘gorgeous’ has become something of a taboo word in the TrustedReviews office. And that’s annoying, because it is perhaps the best word I can think of to describe the Monitor Audio AirStream10. At the risk of sounding cliche; photographs really don’t do it justice.

For a start there’s the unusual ‘lightning bolt’ shape. Stood upright it looks pretty neat, but as the majority of the AirStream10’s weight is in the left section, the system can also be laid flat (so to speak) putting the controls at the front, rather than the top. I think that the controls-at-the-front orientation looks notably better; and on, say, a bedside table it’s clearly preferable. Unless you like the idea of sitting up every time you want to use the controls, of course.


The system is built from aluminium, although only on the front (or top) is this left exposed. The majority of the rest of the AirStream10 has a rubberised coating – ThinkPad style – which I’m a big fan of and the wood veneer on the far left finishes everything off nicely. It’s a much more ‘grown up’ aesthetic than that of the Pure Evoke Flow, for example, and it’s not like you could call that system unattractive. 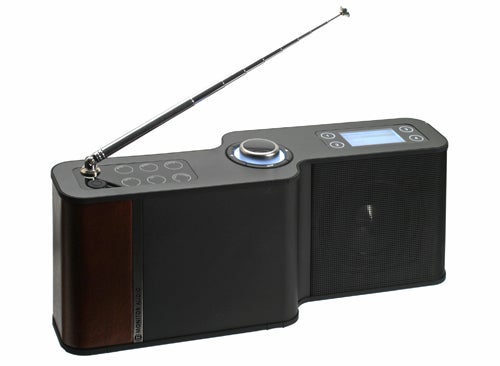 Best of all, unlike a certain other slightly controversial product I looked at recently (hello, MacBook Air), you’d be hard pushed to accuse the AirStream10 of lacking in substance to match its style. The oh-so-stylish device will happily play radio of the FM, DAB and Internet variety, audio files from any UPnP network source and its speaker can be used for anything you care to hook up via its 3.5mm jack.


While the right edge houses an Ethernet port (alongside the 3.5mm input, line-out and headphone jacks) for hooking up the AirStream10 to a router, using a cable rather spoils the aesthetic appeal. Built-in wireless means that shouldn’t become an issue, though. If I was Monitor Audio, however, I would have put all the inputs at the back, sacrificing the choice of an upright orientation in the process.

The controls are an interesting mix of physical and touch-sensitive. The power button, for instance, is actually a button, as are the ‘play/pause,’ ‘next,’ ‘previous,’ and ‘back’ buttons. The knob around which those four controls sit doubles as an okay button in menus and gives a nice little click when rotated, while also offering a reassuringly solid “clunk” when depressed – alluding, as does the AirStream10’s finish, to the quality of its construction.

I’m not so sure about the touch-sensitive controls. Fortunately they don’t need to be used that often. The sleep/snooze control is, of course, useful as it either offers you a little more time in bed, or sets the system to switch to standby in 15 minute intervals, up to an hour. The EQ settings are probably best left untouched, the info button is clearly useful if you want to know more about what you’re listening to, which I can’t say I often do.


The last three buttons, mode, menu and alarm, all replicate functionality available through the central control section. You might think pressing ‘mode’ to change from DAB to Internet radio or streamed music is quicker than doing so via the menu system, but as you’ll likely want to choose a station or track anyway, it turns out not to be. 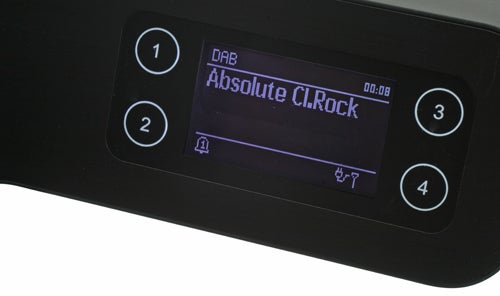 Menu navigation is, thankfully, fairly intuitive. Pressing back will cycle you up to the top-level menu, although once there a further press will then go back to wherever you started which can get a little annoying. Entering Wi-Fi passwords is also a little difficult, but that’s to be expected on any device that has no keyboard.


There is one strange quirk in the AirStream10’s menu system. The radio section has a dedicated BBC menu option, consolidating those stations for quick access, which is great, but the Podcast section has no such shortcut. It’s not a deal breaker by any stretch, but it is slightly annoying. On the plus side, the LCD, on the right, is surrounded by four numbered, touch-sensitive preset buttons for saving radio stations to, which is always useful.

When it comes down to the business of listening to audio, the AirStream10 excels. A 128kbps ‘net radio stream or similar DAB broadcast is never going to sound amazing, but the AirStream10 does a commendable job. FM radio is, unsurprisingly, much better and 320kbps MP3s either streamed or played via the 3.5mm input sounded excellent. 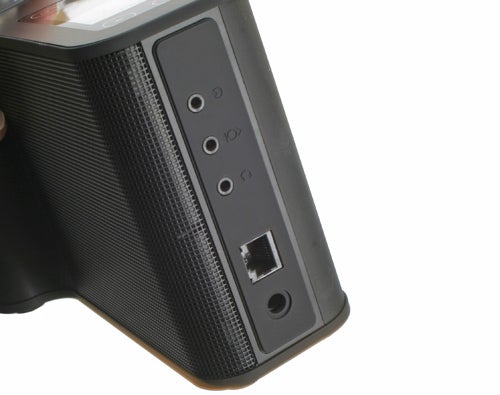 Positioned controls-forwards, the AirStream10’s speaker faces down at whatever surface it’s placed on. As such, it should definitely be stood this way on a solid surface; if left hanging over the edge of a desk the sound produced is left decidedly muted. However, with the speaker pointed down onto the desk surface the sound can reflect around, in a far less directional fashion than with the AirStream10 stood upright.


The weakest area of the AirStream 10’s audio playback is its format support. Sadly, you’re limited to just WMA, AAC and MP3 files which is a far cry from the likes of Logitech’s Squeezebox Boom, which even played FLAC files. I don’t think the benefits of lossless audio would be particularly realised via the AirStream10, though, so it’s not too severe an omission. 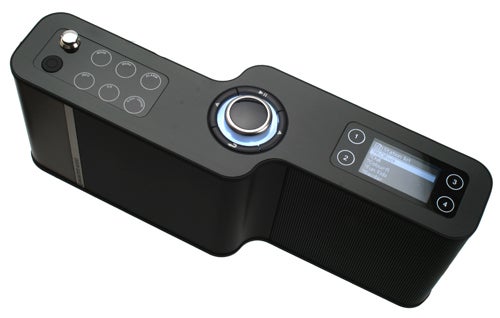 Audiophiles are still going to want to invest in the likes of an Arcam Solo Mini, or a Sonos setup, but those baulking at the cost of those systems or after an attractive, capable bedroom radio, should be more than happy with the AirStream10.


That the AirStream10 will play back DAB, FM and Internet radio is hardly revolutionary. Nor is its ability to stream media files from a UPnP server. Rather, it’s the combination of these features and its eminently stylish chassis at a surprisingly affordable price that makes the AirStream10 such an attractive proposition.