For a long time, computer-based music playback and audiophile hardware have remained resolutely separate. Proper hi-fi companies went on for years making CD-players and SACD players, amplifiers and speakers as if the iPod had never existed.


In recent months, however, we’ve seen some softening of that stance, and the two are finally beginning to come together. I’m thinking principally of B&W’s notable entrance into the crowded iPod hi-fi market with its remarkable Zeppelin iPod sound system, but it’s by no means the only one. We’ve also reviewed a few other serious iPod music setups over the past year or so, from Fatman’s valve-based iTube amplifier and controller, plus a rather lovely lifestyle speaker and amp system from esoteric audio specialist Ferguson Hill. I noticed recently that Krell – a name synonymous with hyper-expensive, audiophile hi-fi – has also released an iPod dock called the KID. Naturally, it’s expensive, retailing at a stomach-turning £1,300.

Well, now it’s Arcam’s turn to pull off the same trick with its Solo Mini. Arcam has long been a favourite of the British hi-fi press, winning award after award for its audio products for the sheer value and sound quality they offered. I once owned one of the firm’s popular Alpha 7SE CD players (before moving up in the world), and it was an extremely impressive piece of kit. 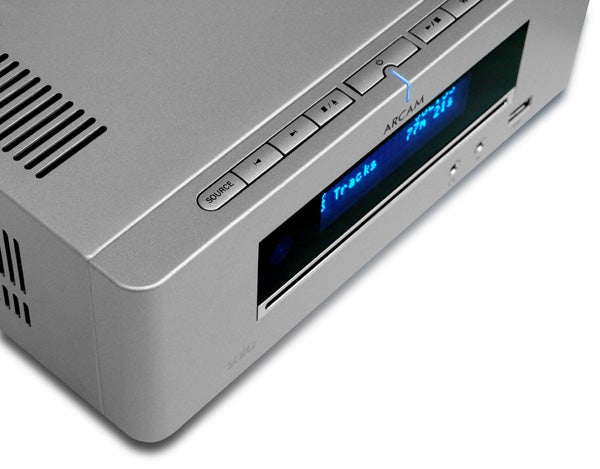 So when I read about the Mini, I was quite excited. Here was an iPod-capable music system from a manufacturer that really knows its audio onions – I was keen to find out just how good it could make an iPod sound. But before I go any further, it’s worth pointing out that I’m reviewing a combination of products here: the Solo Mini doesn’t actually come with the rDock as standard – it’s an extra £120 on top of the £650 you pay for the Mini, which adds up to what looks an extremely high price tag of £770 and that’s before getting a pair of speakers – a lot of money to spend on playing back music from a sub-£200 portable music player. 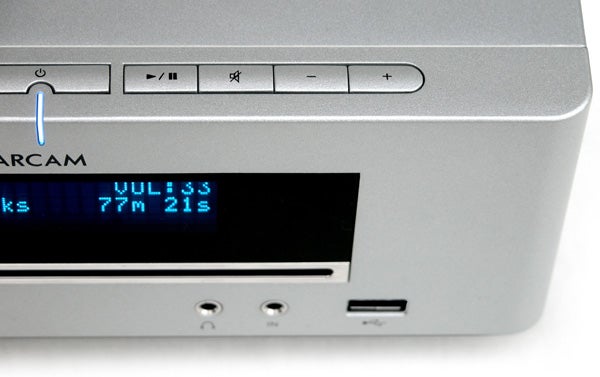 But the Solo Mini is no one-trick pony – it’s a truly do-everything hi-fi system. It will play back CDs via a sleek, slot-loading player, has an integrated 25W-per-channel amplifier, AM and FM radio tuners, plus a DAB radio receiver and an alarm clock facility (for those rich enough to install one of these systems in a bedroom).


On the front panel you’ll find a 3.5mm line-in input for another MP3 player, and on the rear a whole host of connections – four pairs of stereo phono inputs plus pre-outs for power amplifier connection, and a pair of proper binding posts for speaker connection – no spring clips here. Most impressive of all, though, is the box all this comes packaged in. Though quite deep (350mm), it’s all squeezed into a case half the width of a standard hi-fi component (230mm).

Then there’s the rDock capability. The rDock hooks up to the rear of the Solo Mini with not only a pair of phone cables for the audio signal, but also a serial cable which allows the Mini to send control signals to your iPod and receive them. This means that, unlike many other iPod systems that rely on you reading directly from the tiny iPod screen when you’re sat on the sofa a couple of metres away, you can instead read track names and browse music on the Mini’s screen, which is far more legible. 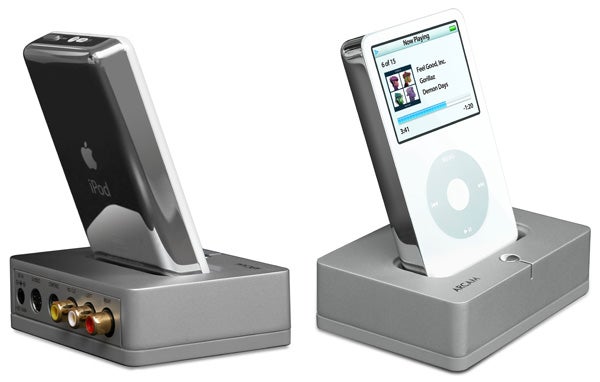 And it all works rather well. I’d perhaps like to have seen the ability to display more than one track on the blue LCD screen at once, but it’s so quick and responsive that you soon forget about that limitation. Hold up or down on the Mini’s remote control and long track, album and artist lists whiz by in a blur of blue lettering. The rest of the system is just as easy to use. 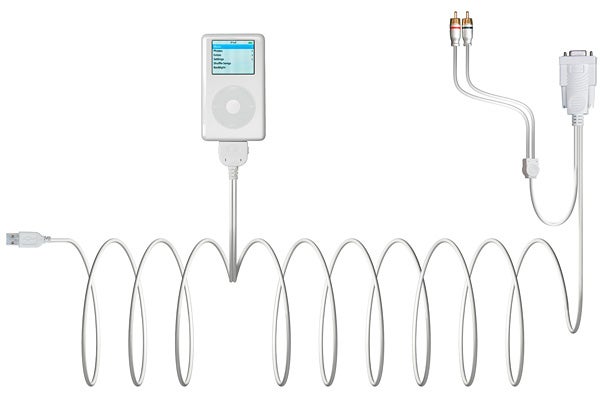 The rDock has other clever features built in too. It’s solid and heavily built, hewn from a single block of metal, which means you can connect the stiffest, most awkward of cables without worrying about it moving from where you want it to be. Its docking connector is beautifully engineered – drop an iPod onto it and it won’t wobble at all. And, though you can charge while listening, the rDock allows you to switch into battery mode while listening, thus isolating the output from potential interference from the cheap-looking brick-type power adapter supplied in the box.

I must say I was seriously impressed by the integration of so many components into so small a package, and with the elegance and thought with which it had all been put together. But I was also a little worried. The usual mantra for audiophiles is to keep things simple. When you start cramming sensitive, high-end audio electronics, cheek-by-jowl into a tiny box, sound quality will surely be the first thing to suffer – even with DACs from Arcam’s award-winning CD73 CD player inside. Not here.


This is a quite extraordinary-sounding music system. The first thing I did was to feed a few of my current favourite CDs into the smooth, slot-loading CD player at the front. I was expecting quality, but as I turned up the volume, a big grin began to spread across my face. There’s something about top quality audio gear – you just know when you’re listening to something special. And the Mini is certainly that. Ulf Wakenius’ atmospheric jazz guitar just leapt out from the speakers with a life all of its own – something I really hadn’t been expecting and the Mini stayed in full control all the way up the volume scale. 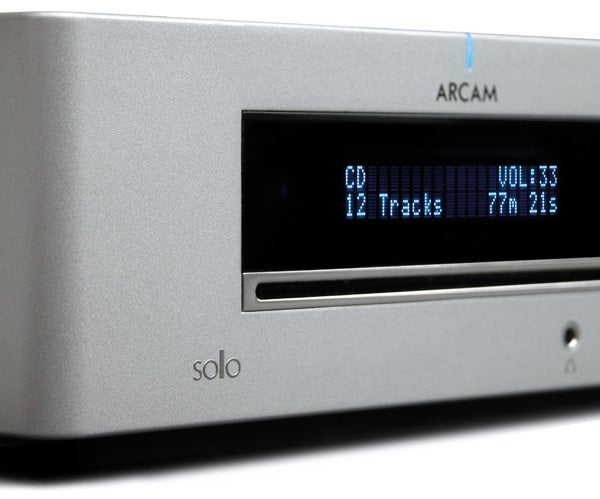 Brad Mehldau’s wonderful live jazz rendition of classic metal number ”Black Hole Sun” rang out with clarity, purity and bags of atmosphere. Every instrument was rendered with almost clinical precision – the piano, double bass, hi-hats and drums were all easy to pick out and yet everything was joined together in such a convincing projection of the music that if you closed your eyes you could quite easily imagine you were listening to equipment much more expensive.


And despite all the components inside the box, there’s not a hint of interference or hiss. The result is silence where there should be silence and big dynamic sound when drama is required.

Eager to crack on, I put on my recording of Mozart’s ”Requiem” and was not disappointed. Many music systems I’ve listened to simply can’t cope with the complexity of so many high-pitched, powerful voices singing all at once, but the Mini recreated the phalanx of vocals with hair-raising accuracy.


Imaging was brilliant, detail capture superb and bass notes always kept tightly in control. My own music system is, all told, around three times as expensive as the Mini. But the difference in sound quality is very small indeed. The Mini only lacks for sheer grunt and a little extra sparkle. 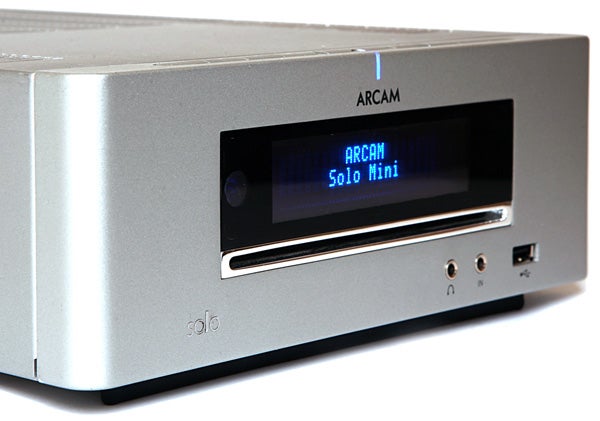 With a few albums ripped to Apple Lossless I set about comparing the rDock setup to direct CD playback, and I was very impressed. Music played in this way doesn’t quite have the life, verve and precision as when it’s played from the original CD, but it’s still very, very good – better than any iPod-based hi-fi system I’ve ever had the opportunity to listen to.


The only downside to all this quality is that it ruthlessly exposes poor quality recordings and, here, the low quality of the DAB transmissions you can pick up on the Solo Mini’s integrated DAB tuner. Still, there’s always the FM tuner, which with a solid reception provides much better audio quality. 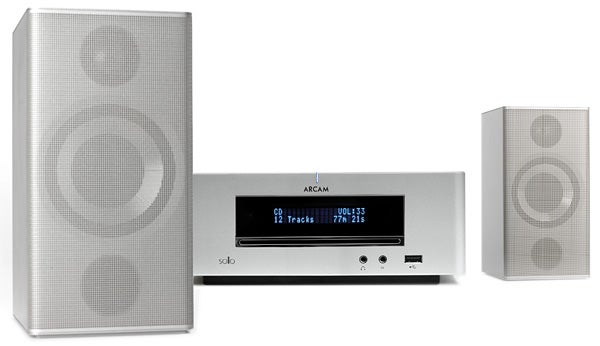 And if you haven’t already bought a pair of speakers to go with the Mini, I can also recommend Arcam’s own Muso speakers. I was supplied a pair of these four-ohm speakers for the test and I can vouch for their quality. They’re front ported – so quite flexible in terms of where you place them – and are solidly built from bits of thick, rigid cast aluminium. I stuck them on top of my Target K-Series stands and they performed admirably, producing balanced and pure sound without ever sounding strained or running out of puff. The small size belies the sheer quality of these speakers.


Of course, if you already own a decent pair of speakers, you should probably try them with the Mini before you upgrade. You may find that its highly capable amp will wring new life from what you thought were tired old drivers.


The Solo Mini may look expensive on paper, but the features on offer and the quality it demonstrates are, in fact, well beyond its humble price tag. £770 for such a high-quality amp, CD player and one of the best iPod dock systems around is an absolute bargain in my humble opinion. Add the Muso speakers for another £280 and you have yourself a complete, high-end stereo system for just a few quid over a grand.


In short, if you love your music, want to combine high quality sound with a touch of iPod convenience and the elegance and minimalism of a simple one-box hi-fi system, you should spend your money on one of these. It’s brilliant.