What is the Misfit Ray?

Not everyone wants to wear what’s obviously a piece of tech on their wrist, and the Misfit Ray is one of the most visually appealing trackers I’ve seen to date. With an enticing design has come certain limitations, however, so the Ray is certainly not geared towards fitness enthusiasts looking to train more effectively or to gain a competitive edge. But if you’re taking your fledgling steps into getting fitter, the Ray could well be for you. 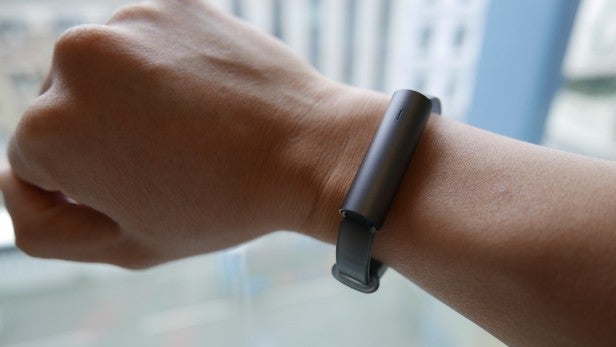 Misfit was recently bought by Fossil, known for its outlandish watch designs, and perhaps that’s why the Ray departs from the circular design used for Misfit’s other trackers and has taken the form of a small metal cylinder no bigger than your average pen lid. It has a premium feel, made from anodised aluminium with a brushed finish that’s currently available in either black (which is, in reality, more of a grey) or rose gold. There’s no sign of any sort of display on the Ray. Instead, there’s a subtle multicoloured LED tucked behind a small slit about 3mm long.

Regardless of which colour you choose, you get a TPU sport band included with the base model (£82), although this only comes in translucent grey. There’s also a leather band option (£98), which has a black band with the black model and a grey band with the rose gold.

To attach the band, you simply screw it into the opposite ends of the cylindrical tracker. This means you don’t need to worry about the tracker going missing, unlike with the coin-shaped Misfit Shine that could pop out of its holder at a moment’s notice. The strap fastens on your wrist securely, too, and adjusts to accommodate anything from my tiny wrist to much larger sizes. You’ll need to remove the strap to insert the three 393 button-cell batteries the Ray requires to operate.

The good news, and a recurring theme with Misfit’s trackers, is that battery life is rated at 6 months. Not quite as long as the Withings Go, but a commendable amount of stamina nevertheless. It means you can put on the Misfit and largely forget about it. It’s waterproof as well, so you can keep it on in the shower and even while swimming, as it’s water resistant to depths of 50m.

For those sartorially inclined, the Ray is the most subtle and stylish tracker I’ve worn. It blends in nicely if you already accessorise your wrist, too. Its design is surprisingly unisex, at least if you opt for the black variant. So if you’re looking for a tracker based solely on looks, the Ray would win most beauty contests.

You’re not limited to wearing the Ray on your wrist, either. Misfit has said new accessories are coming soon and these extend beyond just different wristband designs. There will be necklace accessories that allow you to wear the Ray as a pendant. Accessory packs will cost around £30, though, so customisation doesn’t exactly come cheap. 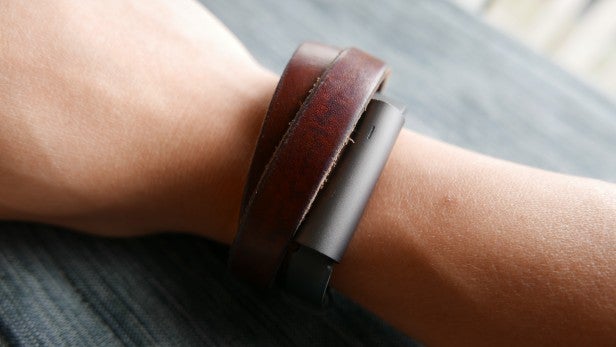 Misfit’s trackers have always used a points-based system to track your activity – and it makes a return here. It’s not drastically different to counting steps, as is the case with other trackers such as those from Fitbit. It’s just that your steps are converted into points.

As the Ray is targeted more towards those only looking to increase their activity levels, rather than fitness enthusiasts, its tracking capabilities are rather limited, so don’t expect GPS or anything fancy like an altimeter. The Ray will automatically begin tracking activities, but you’ll need to manually apply labels such as Soccer, Tennis, Basketball or Dancing afterwards.

You can also manually add activities that then appear in your activity feed, which Misfit calls your day’s ‘Story’, but doing so won’t necessarily add any points to your daily total. So while you can add a Yoga activity, it’s purely as a record rather than adding to your tally.

The Misfit Ray can also be worn for swimming, and usefully the app will tell you what you need to do in order to hit your day’s target. This could mean 1 hour 9 minutes of walking, a 31-minute run or 23 minutes of swimming – or a combination of any of them. It’s a good motivator to be more active, even if it is rather rudimentary. As for step and distance accuracy, the Ray isn’t great compared to anything with GPS. A lunchtime run returned a figure of 3.6km compared to 4.1km from my Huawei P9’s GPS. I was also sold short on a 5km route I’ve run before as well. 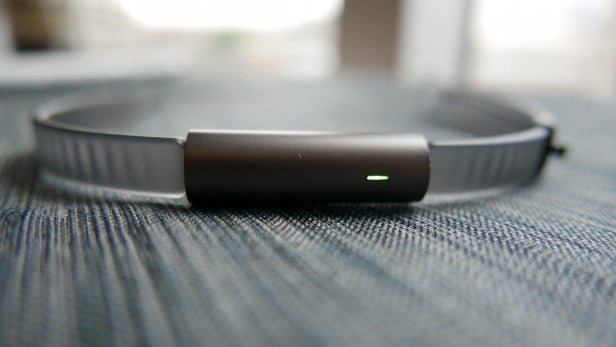 In order to get feedback on your current activity levels without looking at the app, you use the multicoloured LED. A double tap of the tracker will cause it to light up and flash through different colours that show your percentage completion for the day.

The Ray has automatic sleep tracking and I was surprised at how accurate it was. The following morning you’re able to see the duration of your sleep broken down by light and restful sleep, as well as when you were awake. This isn’t quite as deep and granular in analysing your sleep as other sleep trackers. Night-time toilet breaks were correctly tracked as awake and even the minute I woke up was more often than not spot on.

The app itself is broken down into four different tabs. Home is where you find your Story feed and a list of all your activities. Then there’s the Social tab that lets you follow other people’s Misfit accounts to keep an eye on their activity and take part in a little friendly competition, should you wish. The Profile tab gives you a very basic overview and highlights, including your best day, total number of goals met and your best goal streak.

The other tab is Device that lets you know your device’s battery level and allow you to manually sync your tracking data. You can also define your Ray’s wearing position, which will help with device accuracy. This means you don’t have to wear it on your wrist. I would occasionally loop the Ray through my shoelaces, but the app will also accommodate the forthcoming necklace accessory. 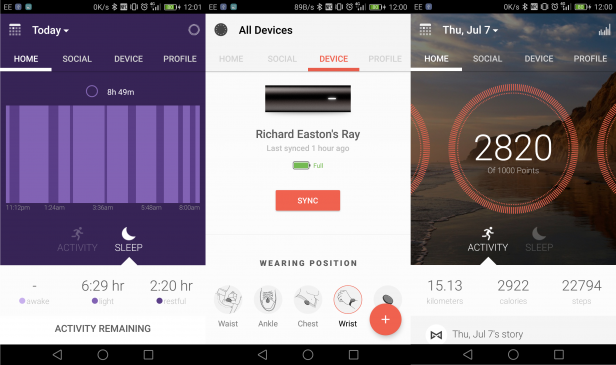 It’s here you can also set the Misfit Move alert, which is a little reminder to get up and take a walk if you remain immobile for a certain amount of time. This triggers a vibration motor inside the tracker, which can also be used for a silent alarm to wake you up each morning and alert you to notifications on your connected smartphone.

However, the vibration isn’t particularly strong. I actually slept through the alarm on more than one occasion, so I wouldn’t recommend relying on it. Even when awake you can easily miss the Move alert.

It’s also disappointing that the morning alarm hasn’t got more intelligence, considering the sleep tracking is so good. I would have welcomed an alarm that triggered based on my current sleep stage in order to wake me up at a more optimum time.

Also, while the sleep tracking was pleasantly accurate, the Ray isn’t going to be the most comfortable tracker for everyone to wear in bed. I often like to tuck my arms underneath my pillow when sleeping, but this meant pressing the cylindrical tracker straight into my wrist bone, which proved uncomfortable.

Should I buy the Misfit Ray?

If you value form over function and have the most basic activity-tracking needs, you’ll probably get on with the Misfit Ray. It’s certainly an attractive wearable and covers the absolute basics.

The Misfit app could be improved with the ability to log food to make it more all-encompassing – something found on Withings and Fitbit apps.

But fundamentally, you’re paying a premium for form over function. The Moov Now is a much better bet if you don’t mind a less attractive design. It’s a far more comprehensive tracker and cheaper to boot.

An undeniably attractive tracker that’s just too pricey and basic.