In the case of the Mio MiVue 358 and 388, video is recorded in 1080p format, while the entry-level 338 is limited to 720p. For the 388, video is captured at a data rate of a little less than 13Mbits per second. As video is recorded, it is split into 287MB chunks, which equates to three minutes of footage. By default, your speed and the current coordinates of your position are imprinted on the bottom left, updated every second, whilst the date and time are on the bottom right with the device name at the top right. 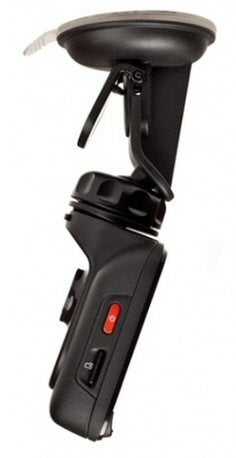 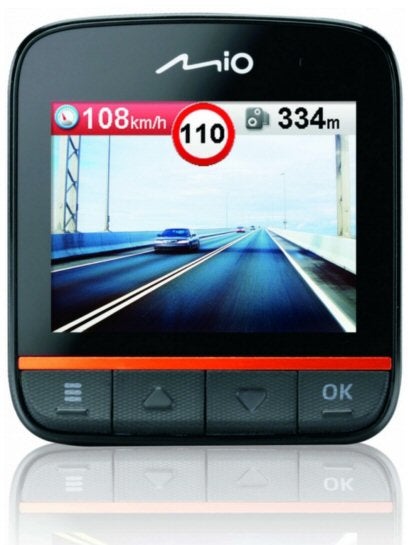 A micro SD slot is used for storage, and a 8GB piece of media will be enough for around 85 minutes of footage. However, once, the storage is full, the device will simply start recording over the earliest files. So you will lose these, but won’t ever miss an event that has just occurred. Audio is also recorded, so you could narrate instructions as you drive, or create an audiovisual tour of an area.

Unique to the top 388 model is safety camera detection for the lifetime of the device. A warning pops up on screen to tell you when you are approaching a safety camera and have strayed above the speed limit. However, as the MiVue uses your car power output, you would need an adapter to power a sat-nav at the same time, if you want to use one for navigation.

The MiVue hardware is only part of the equation, however, particularly where the 388 model is concerned. The bundled MiVue Manager software lets you browse the contents of the Drive Recorder, and play each clip back without having to copy it to a local drive first. Since the clips have been recorded alongside the GPS location, you can watch your progress on a map as the video plays back. 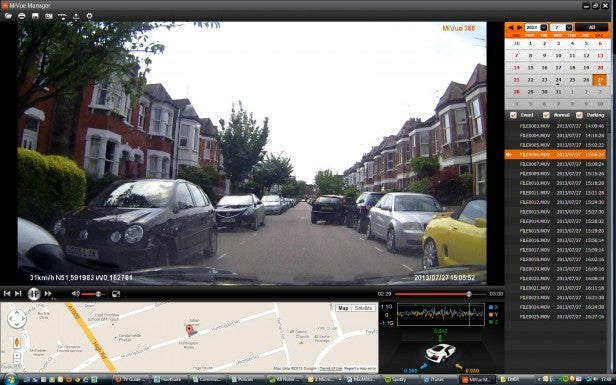 Most impressively, the G sensor captures the motion of your car during your journey, and this is displayed in a dynamic graphic while the video plays back as well. The G force experienced is shown laterally, along the direction of travel, and even vertically, although this will generally be close to one, representing gravity. This will tell you if had to brake suddenly, have over-egged a corner, or been hit.

You can back up your Mio MiVue 388 Drive Recorder files locally, grab screenshots, and export the geographical data as KML files, which will allow it to be imported into applications like Google Earth. You can also upload directly to YouTube or Facebook, at least in theory. We couldn’t get this facility to work, though, which is a shame if you want to share a driving experience with your friends or the world. But you can still do this directly within YouTube or Facebook.

Should I buy the Mio MiVue 388 Drive Recorder?

If you are worried about being able to back up your claims about road behaviour, the Mio MiVue 388 can supply the evidence, making it worth considering. It would also make a decent trackday recorder, assuming the organisers will let you use a camera attached via a suction mount, as some require these to be more securely attached. The price, however, does push it beyond something you would buy on the off-chance of needing it.

The Mio MiVue 388 is an intriguing device. It’s not going to be an essential tool for everyone in the UK, but if you do want to guard against false claims of fault on the road, it does its job well.