Navigation is merely one of the Cyclo 505 HC’s features, however.
It’s all the performance monitoring facilities that are the true meat of
the Cyclo 505 HC and they require a little setting up. The 505 itself uses a robust pair of cable ties to attach
its mount to your bike’s handlebars, which the device then docks into. We found this setup kept the 505
HC in place on our test mountain bike.

The cadence sensor is a little more tricky to install, however. There are four elements to secure, two of which are connected via a wire. These two are the actual sensors and transmitter. This sensor and transmitter combo must be attached to your bike frame in such a way that the two pieces can track your pedals and wheel. 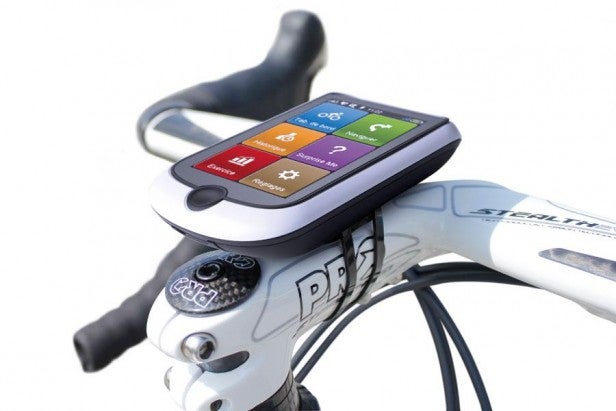 These need to be secured tightly with the supplied cable ties, so they don’t get knocked out of place as you cycle, which could be a problem on thinner frames, although our mountain bike’s hefty frame wasn’t an issue. You will also have difficulty transferring these, or the device handlebar mount, to another bike, although the cable ties are pretty standard and could be replaced with new ones. A set of two extra bike mounts costs £14.95.

For the wheel and pedal sensors to work, small magnets are also supplied that must be attached to the wheel spoke and pedal, and positioned so they pass the appropriate sensors. The wheel spoke sensor screws into place, whilst the pedal one uses yet more cable ties. Getting everything set up is a bit fiddly and take some care, but once things are securely in place we found they stayed there. The heart-rate monitor is pretty standard, in contrast, with an elasticised band that straps around your chest, so the monitor is positioned in the centre to pick up your beat. 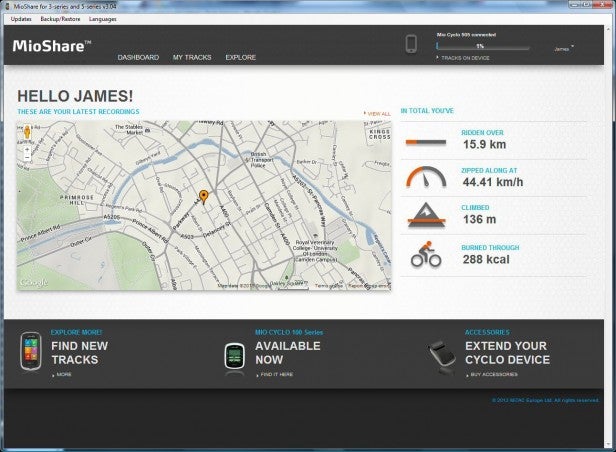 Once you have installed all these sensors, you need to pair them to the Cyclo 505 HC, which uses the ANT standard. The Settings section offers separate screens for connecting with heart rate, cadence and power meters, although the latter isn’t available from Mio as they are usually built into custom pedal crank arms. Mio claims the Cyclo 505 HC is compatible with most ANT power meters, so you can add this extra information stream to the mix as well. 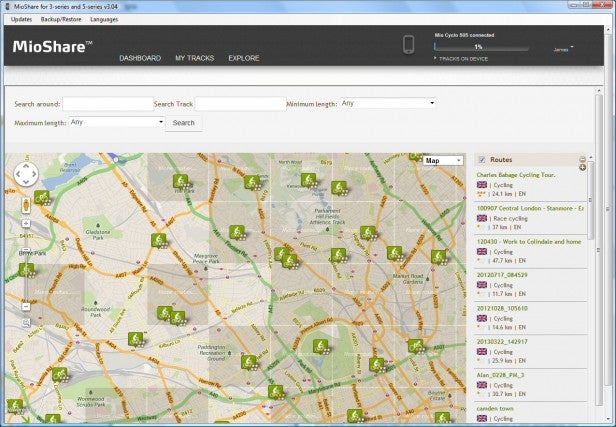 The 505 HC has plenty of facilities for tracking your cycling as an exercise routine, and you can use this to plan your regime too. Various workouts are available. You can base them on distance, time, calories burned, keeping your heart rate within a zone, and power within zones. You can also select Surprise Me for an unexpected workout.

The battery life is pretty impressive in operation. Unlike a car sat-nav, which will generally last a couple of hours without its power supply at most, Mio claims 12 hours from the 505 HC’s 1,500mAh battery. We found it kept going happily for multiple hour-long rides without registering low capacity. 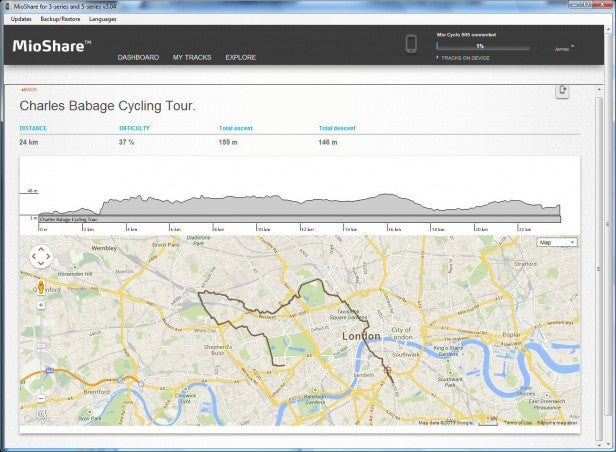 As with any self-respecting exercise GPS exercise device, you can upload the data to an online system, called MioShare. You record tracks as you ride, and these can be uploaded to MioShare, where you can see your route on the map alongside all the recorded data, including hill inclines.

The 505 HC still incorporates a USB connection beneath a protective rubber flap, but Wi-Fi is meant to be the primary means of upload after initial registration. You can also browse for cycle routes in various areas, and upload these to the Cyclo as tracks to follow yourself. 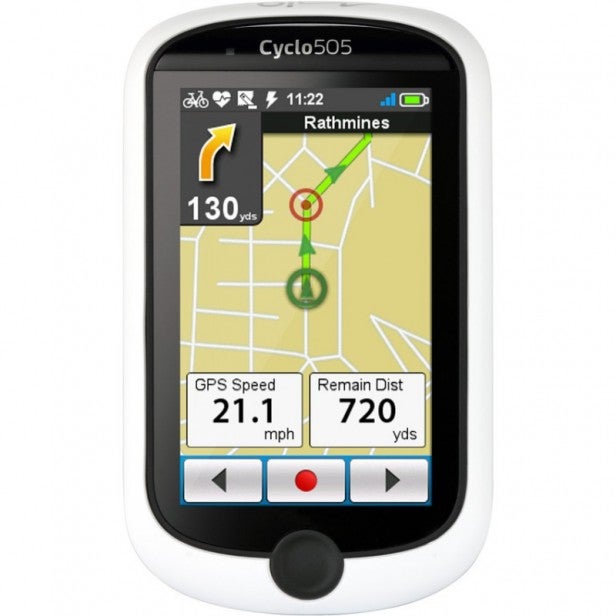 The Mio Cyclo 505 HC is a tempting proposition. It is pricey, but there is a huge range of features available, whether you want to find a bike route, or track your cycling as a workout. The cheaper 505 and 500 options are available if you don’t need everything in the full 505 HC package, although the 500 lacks the ANT compatibility so won’t let you monitor your performance during your rides.

The Mio Cyclo 505 HC is packed with features. Not all of them are perfect, and this is a pretty expensive package, but it’s still a comprehensive bike navigation and cycling training tool.