What is the Ministry of Sound Audio M Plus?

The Ministry of Sound Audio M Plus is the middle child in a range of new wireless speakers from the Ministry of Sound, the dance music label and super-club. For £199, you get both Wi-Fi and Bluetooth streaming; for £149 there’s a Bluetooth-only version available.

Although there’s clearly some meat on its bones, the Ministry of Sound Audio M Plus is still portable. In general this feels like a first-wave product, one that will require a little tweaking before it can truly take on the big names. 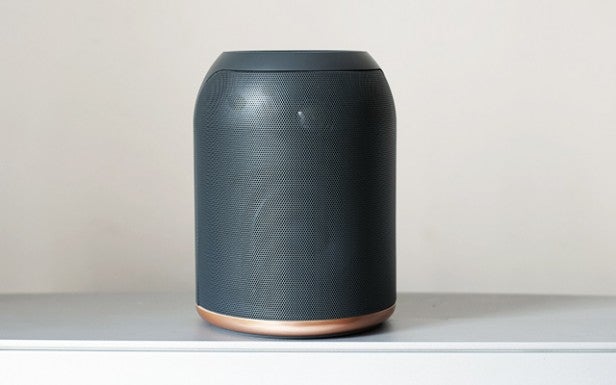 Ministry of Sound Audio M Plus – Design and Features

The Ministry of Sound Audio M Plus is unusual. Style-wise, it looks very different to the other portable speakers in this area. In fact, some may say that it bears a resemblance to the Sonos Play:1.

However, unlike the Sonos, the Audio M Plus’ built-in battery will see it last away from the mains for around six hours at mid-level volume. While this stamina isn’t warrior-like, its size probably dictates that it will be used for BBQs, or listening to some tunes in the bath – rather that for the length of a holiday.

The neat carry-handle indent in the rear of the Ministry of Sound Audio M Plus makes carting it around the house a cinch. And if you’re looking for something that you can mount more permanently, then there’s a threaded port on the bottom of the unit to enable you to attach the speaker to a stand. 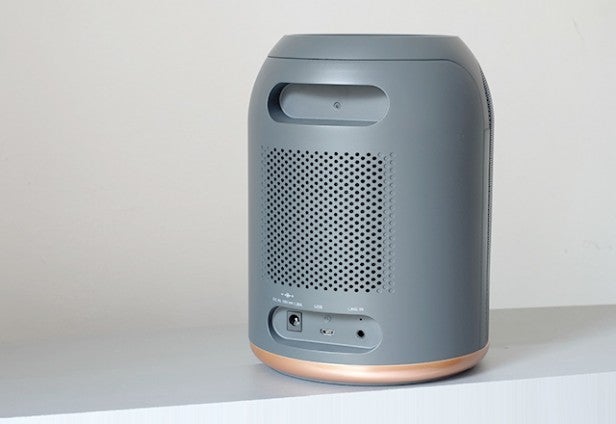 The charger for powering up the speaker isn’t the micro-USB socket used by most phones; instead, it’s one of the classic cylinder ones. The micro-USB port on the rear of the speaker can be used to charge the unit, or power its Bluetooth operation.

At a time when every sub-£150 wireless portable speaker seems to have a frame that you can easily grip in one hand, the Ministry of Sound Audio M Plus is a bit of an oddball. Nevertheless, it does include some nifty features.

For example, the circular band on its top actually acts as a music control. Swipe around it to adjust the volume. You can tap it to change tracks too. 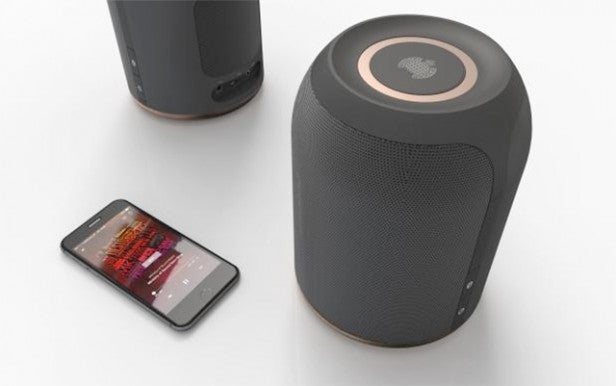 In addition, there’s plenty more tech in play underneath the Audio M Plus shell. The inclusion of Wi-Fi and Bluetooth enable it to act simply as a wireless speaker such as the Bose SoundLink Mini II, or something more involved.

By hooking it up to Wi-Fi, you’ll be able to use use Spotify Connect – which lets you fire music over directly through the Spotify app – or the Ministry of Sound app to unlock some basic multi-room functionality. This enables you to group speakers and then send different tunes to different groups. Plus, the app will even let you take a feed directly from the MoS club.

I did find the Wi-Fi setup a bit of a pain, but then it so often is with this type of speaker. Once complete, however, it needn’t be touched until you change your home internet settings.

Also note that the Ministry of Sound app crashed on me a few times. However, since this is a brand-new range, it’s likely that reliability will improve in the coming months. Note that it works just fine with Spotify Connect. 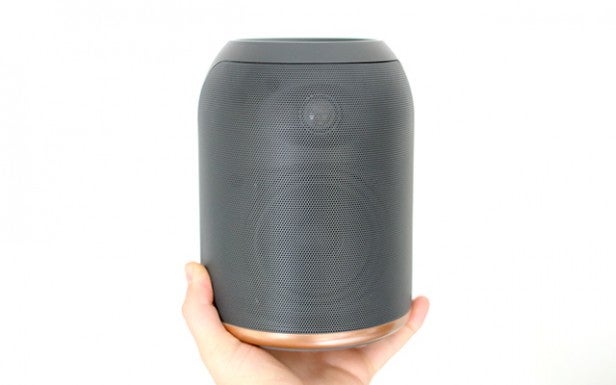 The Ministry of Sound Audio M Plus’ Bluetooth capability is superb. Featuring NFC and aptX, you’ll achieve a far higher-quality wireless transmission than you’d get with a bog-standard Bluetooth speaker. You need a compatible phone/tablet to use this, but it works like a dream with the Sony Xperia Z5 Premium.

Given the few niggles with Wi-Fi, but the splendid Bluetooth experience, I’d suggest considering the “non Wi-Fi” Audio M (without the Plus) – unless the speaker-grouping feature really appeals, that is. It costs £150 rather than £199, making it a price rival to the humble Beats Pill+, for example. 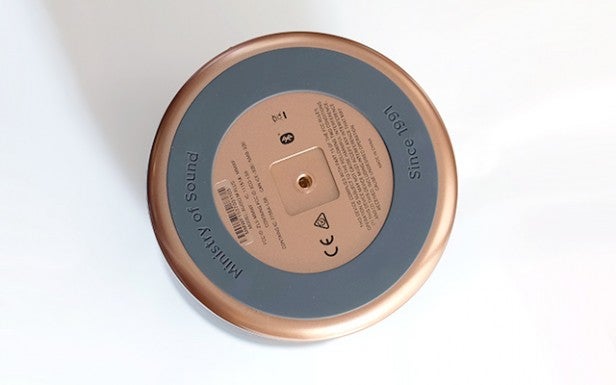 Inside, the Ministry of Sound Audio M Plus has the make-up of a little bookshelf speaker. Behind its curvy grille sit a large 4.5-inch bass driver and a 1-inch tweeter. This is a similar setup to the Sonos Play:1, except that this unit’s bass driver is a little bigger.

On first firing up the Ministry of Sound Audio M Plus, though, its sound signature wasn’t at all what I expected. It isn’t a bass monster’ it’s surprisingly restrained. If you’re after a setup that’ll make you feel kick-drum beats in your chest as well as your ears, then this isn’t it. 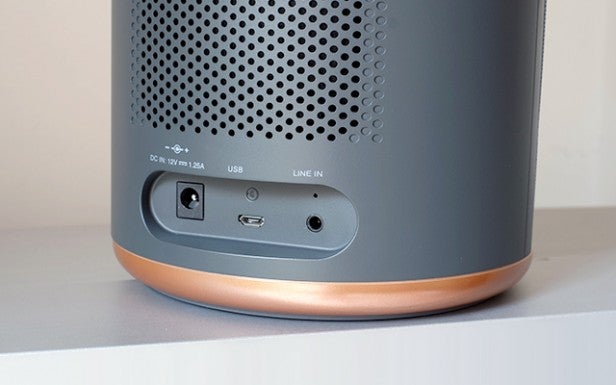 However, the tuning does seem deliberate; if the Ministry of Sound wanted bass much larger than the unit’s size, it would have included a passive radiator. There’s only a bass port here, which provides a far more subtle enhancement.

Testing out its sub-bass abilities (the very low-bass subwoofer frequencies), the Ministry of Sound Audio M Plus is actually able to extend lower than smaller speakers that rely entirely on a passive radiator. But it still isn’t for bassheads.

In comparison with somewhat-comparably priced rivals such as the Bose SoundLink Mini II and the Cambridge Audio G5, what sticks out is the treble. The Ministry of Sound Audio M Plus’ top-end is clear, and offers an extra hit of brightness that really makes the benefit of having a dedicated tweeter obvious. Larger, full-range drivers almost always fail to get you that real spark.

The general sound quality level is very good too. The Ministry of Sound Audio M Plus renders vocals with enough intricacy to imply that real thought has been put into the the choice of drivers and how they’re tuned.

It has ample “proper speaker” quality to justify its price, particularly the £150 non-Plus version. In addition, it doesn’t start sounding like an animal in pain as soon as you turn up the volume either, as is the case with many speakers that rely on small drivers. 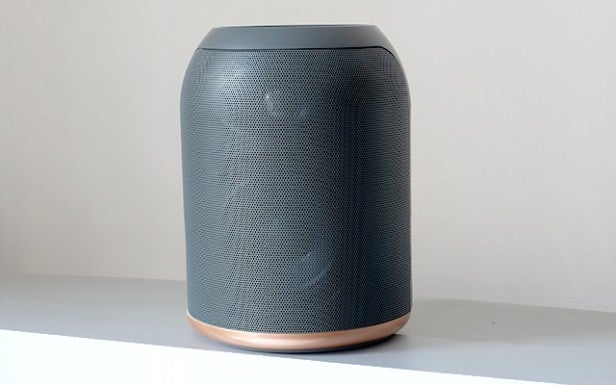 However, the mid-range can at times sound a little harsh. On occasion vocals and snare hits can take on a hard edge that just isn’t apparent in the Cambridge Audio G5, for example. Note that this doesn’t define the sound, only really becoming obvious when A/B testing the Ministry of Sound Audio M Plus with its rivals.

The next issue is a little more serious. While the driver array provides sound not unlike a small traditional bookshelf speaker, its output is highly positional. As a result, you’ll need to think carefully about where this speak will be placed. No matter where you are in the room, you can pretty much pinpoint exactly where it is – even if it’s behind you.

This means that even though it has the audio quality and volume required, a single Audio M Plus isn’t able to give the impression of room-filling sound. This is an issue of physics, one that other speaker makers get around using psycho-acoustic processing, wide-dispersal divers such as BMRs, or by angling some of the drivers.

There’s none of that here – and it’s a significant weakness. 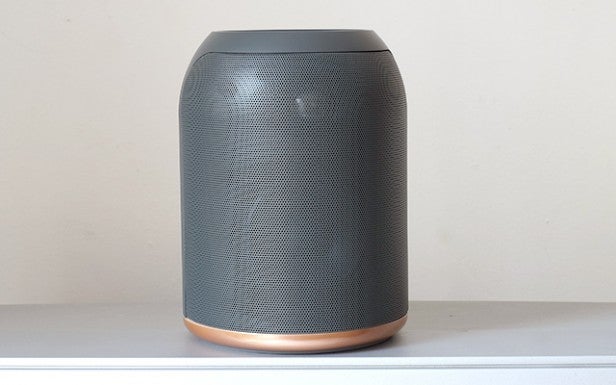 Should I buy the Ministry of Sound Audio M Plus?

The Ministry of Sound Audio M Plus is a refreshingly different speaker, one that blends the driver style of a traditional speaker with the capabilities of a modern wireless one. The Wi-Fi side is a bit of a pain to set up, but it’s no reason not to buy the Audio M Plus.

My only major concern is that this is one of the few speakers in its class to have a very obvious “sweet spot”, thanks to the relatively narrow throw of its drivers. The design may suggest 360 output, but it really isn’t what you’ll achieve. It’s a speaker that feels like it would shine as a stereo pair.

For a speaker that you can place anywhere, you’d be better off with the Bose SoundLink Mini II for example – which also offers more bass. If you’re only after a wireless home speaker for multi-room duties, opt for the Sonos Play:1 instead.

It’s not all doom and gloom, though. The Ministry of Sound Audio M Plus sounds decent, and while it’s only semi-portable, the design is surprisingly handy at home. However, it’s the non-Wi-Fi model that I’d recommend buying. At £150, it’s a very solid deal.

A quirky wireless speaker with fierce rivals, but also a charm of its own.