What is the Minirig Mini?

The Minirig Mini is a teeny portable Bluetooth speaker that boasts a far bigger sound than its proportions suggest. The smaller sibling to the superb Minirig 2, the Mini aims to produce the same fantastic sound but in a diminutive package.

Unlike most other portable speakers, the Minirig Mini uses just a single speaker driver, supporting only mono sound. The idea is that it’s great for background music listening, rather than boosting the audio of your laptop for watching movies, for instance.

Despite its size reduction, Minirig claims the Mini maintains the same great sound as its larger sibling. Instead, the big compromise here is a much reduced battery life. 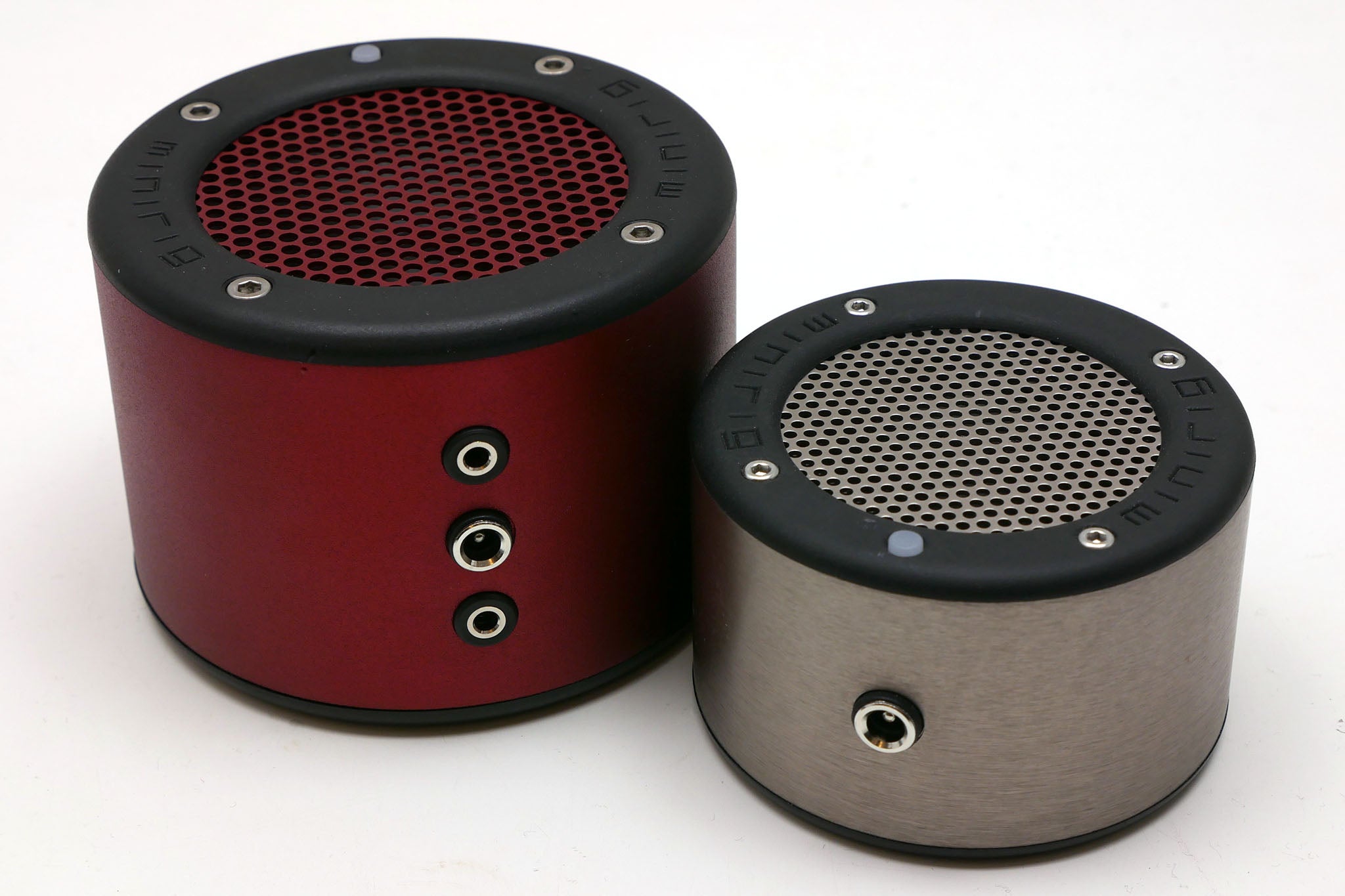 Similar to previous Minirig speakers, the Mini is a fantastic-looking device. The thick cylindrical aluminium walls are super-sturdy and the brushed anodised finish gives off a premium vibe.

The perforated aluminium covering the speaker is thick, while the plastic rings that secure it in place feel reassuringly tough. A rubber ring inset into the base also provides a secure footing. Past experience has shown us that Minrigs – designed and manufactured in the UK – are built to last, and the Mini looks to be no different.

That said, I was a little disappointed to find a quite noticeable lip where the plastic pieces meet the aluminium. It amounts to less than a millimetre, but because the edges of the ring and the metal aren’t rounded, there’s a sharp feel to them. It won’t do you any harm, but it’s enough to be noticeable when handling the device. Unlike the larger Minirig, there’s also no padded fabric case included. Although the Minirigs are built well enough to not require protection from drops or being trodden on (they’re splash-proof too), the case at least keeps scratches at bay.

Minirig does plan to make a simple silicone case or strap for the device,  but this isn’t yet available.

What is included in the package is a charging cable and a 3.5mm stereo jack cable. The former lets you hook up the speaker to any USB port to charge it. The speaker uses a barrel-type input for the power, rather than micro-USB or USB Type C, so take care not to lose the cable. A full charge takes around six hours.

As for the stereo cable, it can be used to connect the speaker to just about any audio source, and the speaker itself has two inputs to choose from: a high-gain channel and a low-gain channel.

The idea is that instead of having a volume control on the speaker, you just adjust the output volume of your source device. By providing two gain levels, you’re able to access a wider range of volume levels.

This is only half their function, however; they can also be used to hook up other Minirig units or a Minrig subwoofer to create a stereo pair or a 2.1 speaker setup (you can also just have one speaker and a sub, for a 1.1 setup).

It’s a bit of a faff getting it all in order, especially since you’ll need a stereo splitter cable (£7.99 from Minirig) to achieve this using just wires, but it does make for a super-versatile system.

For instance, with a subwoofer at home you’ll achieve a more powerful sound for BBQs or entertaining in the kitchen, then you can grab just the speaker for camping trips or other travelling. 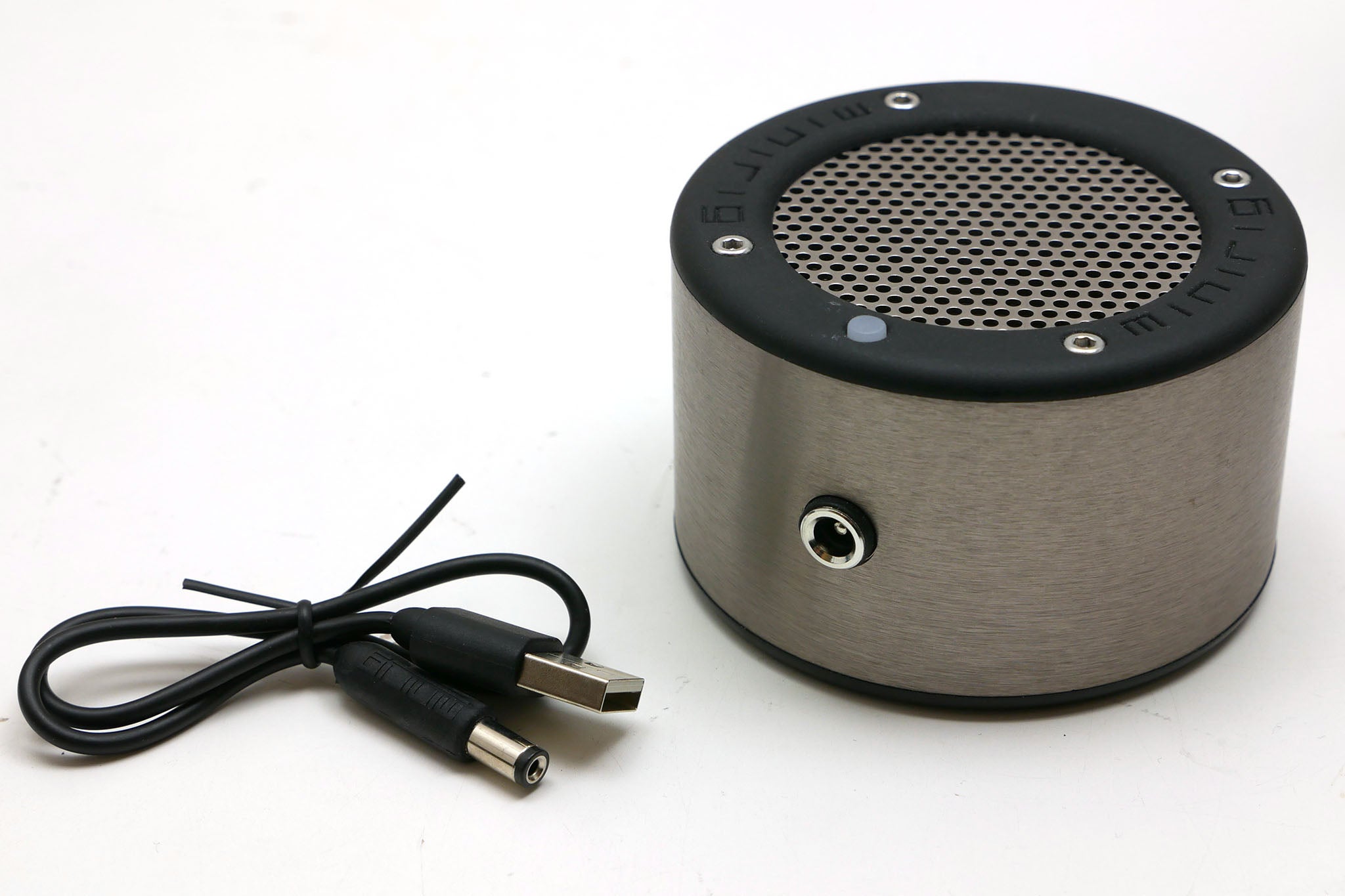 What’s more, you don’t actually need all the cables to make a stereo pair. This is possible via Bluetooth, although you’ll still need a cable to hook up the sub to one of the two speakers.

To turn the speaker on, either plug in a cable or hold down the button on the top of the device. This will glow a variety of colours to signify the mode the speaker is in. Fully charged, it will glow green. It drops through cyan, blue and purple as the battery life reduces, hitting red when it’s on its last legs.

Tap the button when it’s on and the Mini will switch between high- and low-gain modes, glowing brighter for the former.

The Minirig Mini measures just 84 x 84 x 53mm and weighs just 314g. Although it won’t fit in your jeans pocket, it’s easily small enough for a jacket pocket or one of the side pockets on a small backpack.

Minirig has also produced an accompanying app that allows you to change all manner of the Mini’s settings. You can enable a five-band EQ, enable a power-saving mode, rename the Mini, configure the button to play, pause and skip tracks, activate wireless stereo and much more.

The interface is basic but functional, making it easy to get your Minirig system setup just as you like. 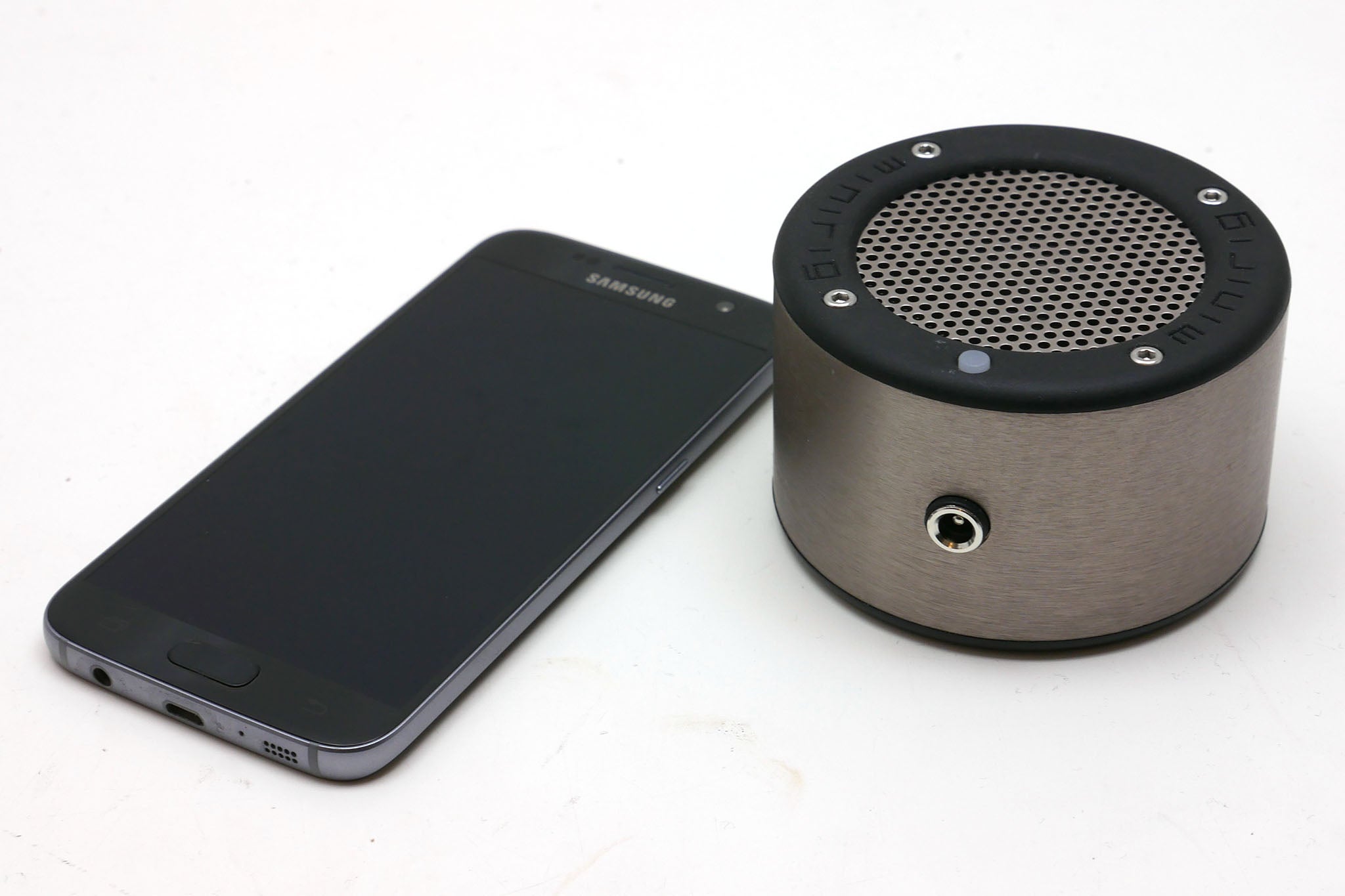 The key selling point of Minirig devices has always been their powerful, deep and generally all-round satisfying sound. The Minirig Mini is no different.

It’s astonishing just how loud and low this thing can go. It’s particularly good for listening to rock and vocal-centric music, where its warm, mid-range dominant sound really adds punch and dynamism. It also manages to do this while presenting a reasonably detailed and not overly forced sound.

That said, compared to the larger Minirig, the Mini does sound a touch more forced with the bass, and a little less smooth overall – but it’s a small difference.

Meanwhile, at the very top end it lacks a bit of sparkle, but it’s the sort of detail that quickly gets lost in whatever background noises are likely to be disturbing your listening: chatter, festival campsite chaos, chirruping birds, and so on. This speaker is designed to provide joyful music listening wherever you are in the world, and in this regard it excels. 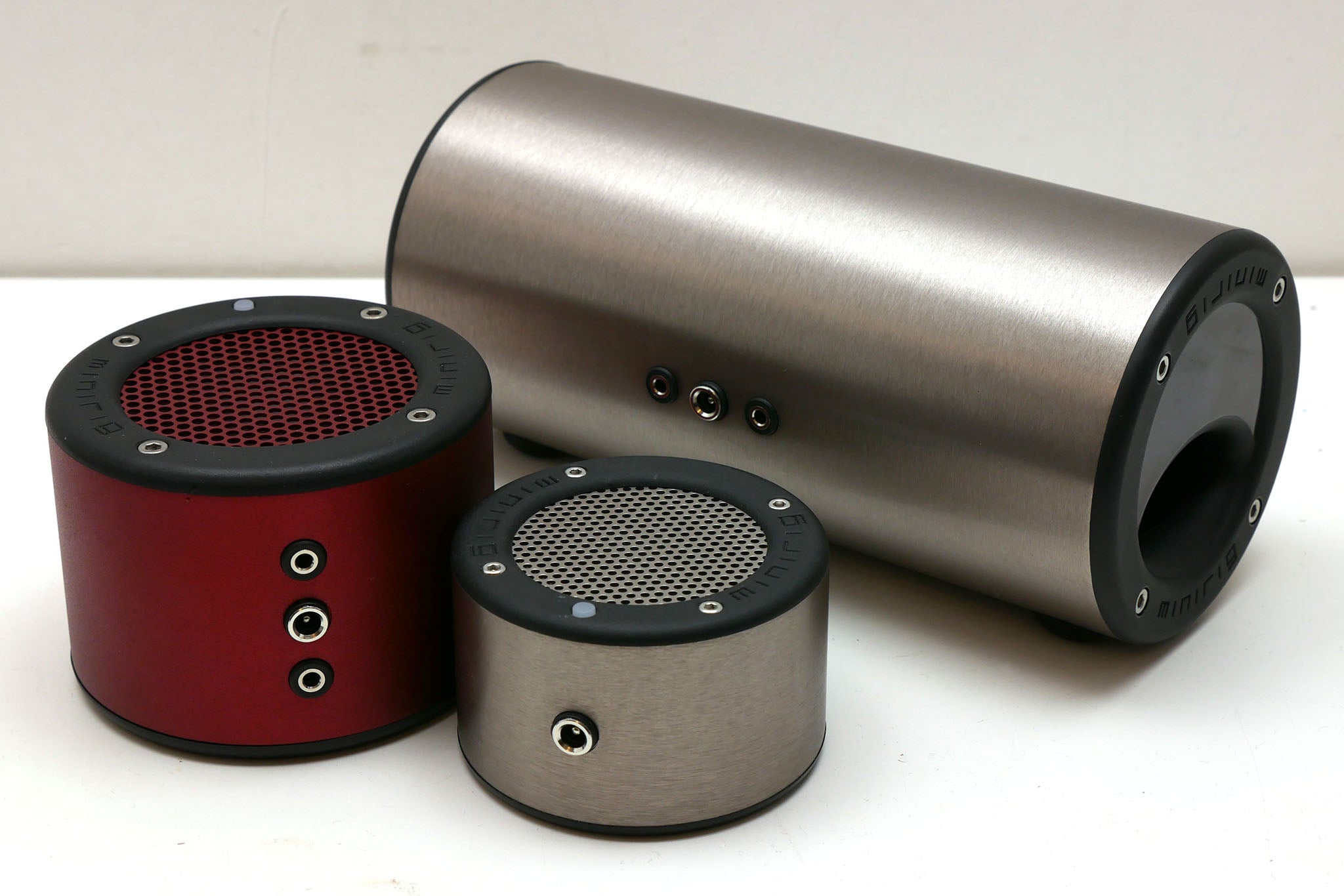 Going back to the subwoofer, it’s an astonishingly powerful unit that really transforms the Minirig from a more personal, intimate listening device to a genuine party starter, especially if you add in a second speaker for a 2.1 setup.

However, there’s one big issue when it comes to sound quality – which is that, for the Minirig Mini, the company has cranked up the volume even more so than it has previously. As a result, if you’re using the high-gain channel then there’s a noticeable background hiss.

It’s the sort of issue that occurs with any sound system when cranked up, or becomes apparent if you’re standing too close, but it’s surprising to see it in such a small speaker – it’s clearly audible from a couple of metres away.

This can be circumvented by opting for the low-gain input, but the speaker always defaults to high gain in Bluetooth mode, so you have to tap the button to switch to low-gain mode. This isn’t a deal breaker, more an  inconvenience; but it isn’t an issue that previous Minirig devices have suffered.

Also, as always with Minirig’s mono approach to audio, if you’re after a portable speaker that can boost the audio of you laptop or any other situation where you may want stereo sound, then it isn’t the best choice. Instead, it’s all about popping the Minirig on a table, next to the campfire or on your garden wall, and letting it just fill the space with music.

As well as its great sound quality, the clincher for the larger Minirig has always been its astonishing battery life. It can last up to 80 hours, averaging 50 hours; it will last for some time when sat idle on a shelf too. In casual use round the house, you’ll achieve a month or two between charges. Regular use on a camping trip will easily see it last a week.

As such, the Minirig Mini’s reduced battery life is a bit of a stumbling block. The company’s claimed average of 10 hours (30 hours max) is about right, but this isn’t very much. One long party and it will be pretty much done. It certainly wouldn’t last a long festival weekend or camping trip.

Nevertheless, this remains decent for a speaker of this size – and few competitors do much better. It just feels like such a step down from the larger version. 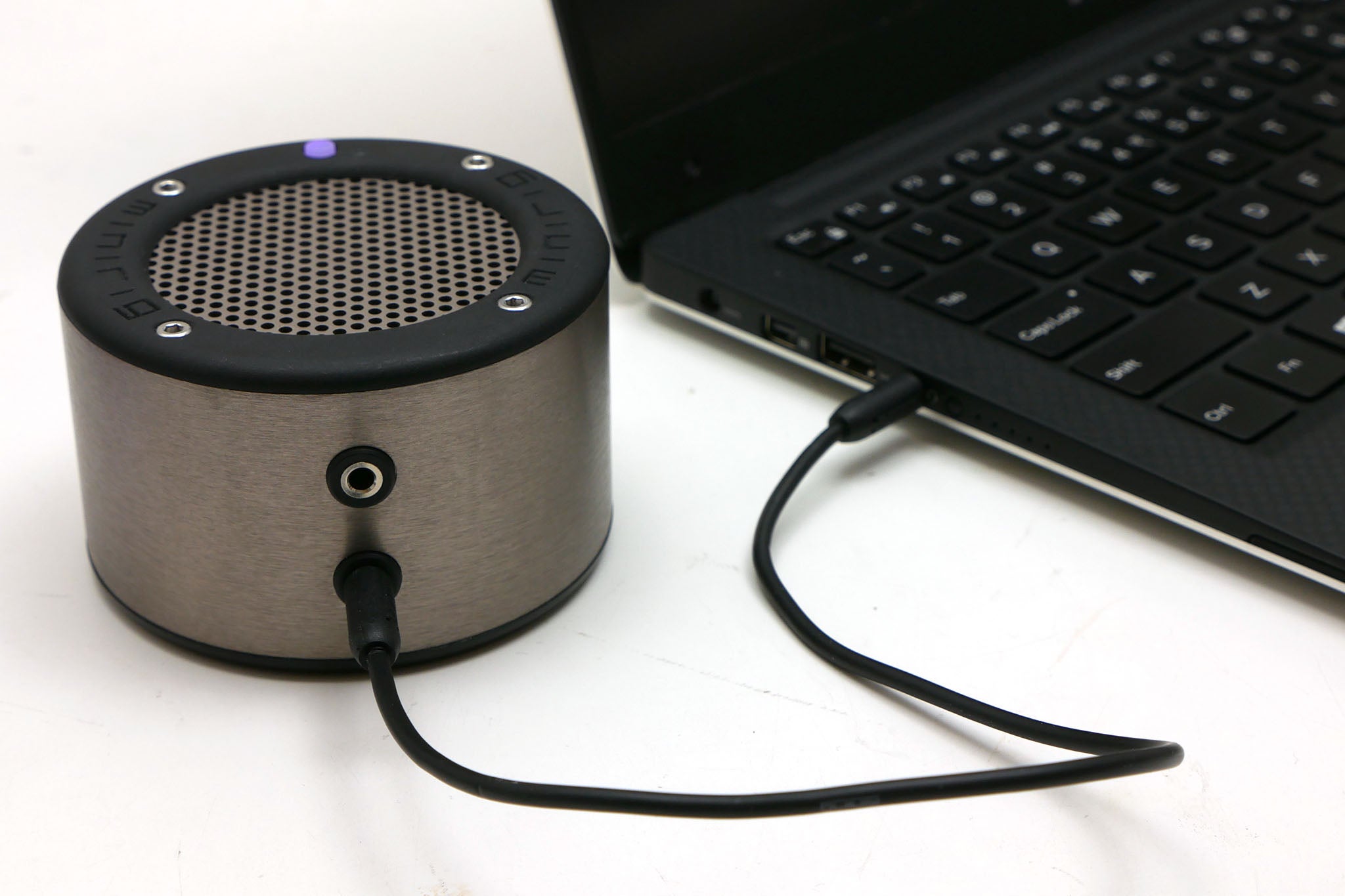 Why buy the Minirig Mini?

Minirig has once again impressed by producing a tiny speaker with a mind-bogglingly powerful sound. The larger Minirig is superb enough but the Mini takes things to another level – it’s truly pocketable but can fill a room with powerful, detailed sound.

It’s also a great-looking speaker, it’s sturdily built and is versatile, with the option to add in other Minrig and a subwoofer.

However, the huge drop in battery life compared to the larger Minirig seriously dents the Mini’s appeal, even if it remains better or at least on a par with most competitors.

If you really need a speaker that’s pocketable then this is a great option, but if you’re happy enough taking a bag then we’d opt for the larger Minirig device.

The Minrig Mini is an impressively powerful, pocketable speaker.