Telltale Games has dabbled in creating episodic game series on a number of topics in recent years. It’s tried a little bit of everything, ranging from movies and TV shows like Back to the Future, Game of Thrones and the Walking Dead to popular games like Borderlands. And now it’s time to see how Telltale Games fairs in its attempt to make Minecraft into such a series.

When Minecraft: Story Mode was announced, the strong Minecraft fanbase exploded online, asking quite how Telltale planned to tackle the game.

Minecraft is a block-based open world building game, and the concept of turning this game into a one centred on a storyline was quite the leap.

Well, you’ll be pleased to hear that Telltale has managed to blend the crafting at the core of the traditional Minecraft game with the choice-influenced storytelling Telltale is famed for.

Minecraft: Story Mode follows the tale of Jesse – a male or female character of your choice, both of which have a unique attitude and play style. Jesse and her (for sake of argument) friends, Olivia and Axel are visiting EnderCon when a massive event happens.

Together with their new found friends Lucas and Petra, and their trusty pet pig Reuben – easily my favourite character – find themselves facing a world-changing enemy that takes them from the over-world to the Nether and beyond. 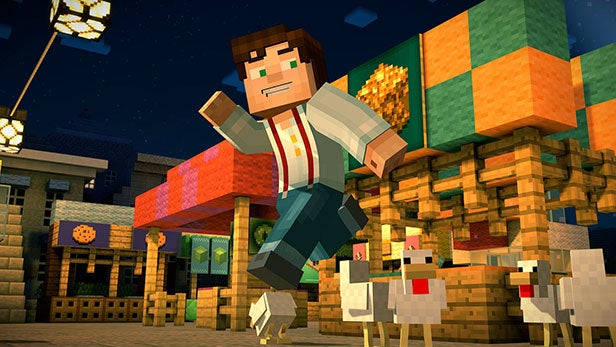 Hanging over our plucky heroes is the legendary tale of the Order of the Stone. This fabled group of adventures are responsible for killing the Ender Dragon, and act as the idols for our little crew. Although they know where Gabriel the Warrior is, the locations of the other heroes is a mystery that needs to be solved.

Episode One, known as The Order of the Stone, gives you around two hours of this story, with four more episodes en route. As with previous Telltale Games’ titles, the storyline of Minecraft: Story Mode is built around the dialogue and action choices you make with your character.

I played through the episode as a female Jesse, who’s feisty and provactive. Speaking to others who have played the game, the male Jesse is far more cautious and careful than his female counterpart. Which one you play as will definitely influence the choices you make, so it’s worth playing through twice. 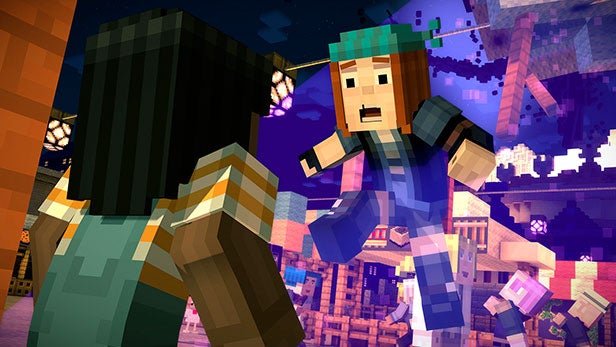 From the outset it’s clear that this is one of Telltale’s games that’s aimed at a slightly younger audience. But that’s something that comes with the territory. Minecraft is a title that’s loved by an audience a couple of decades younger than my 27 years.

I was worried I wasn’t going to enjoy my playthrough of Episode One at first because initially it felt a little juvenile – especially when it came to the humour. But Telltale’s gifted writing evolves and flows, meaning that there were jokes and sketches that appealed to my level too. I’m not going to give any spoilers away, but I was impressed with the game’s story. Before I knew it my two-hour playthrough had come to an end and, to my surprise, I was desperate to play the next episode.

That’s partly down to the expert storytelling, but also because of the way Telltale has expertly incorporated the crafting elements that are so important to the main Minecraft game. 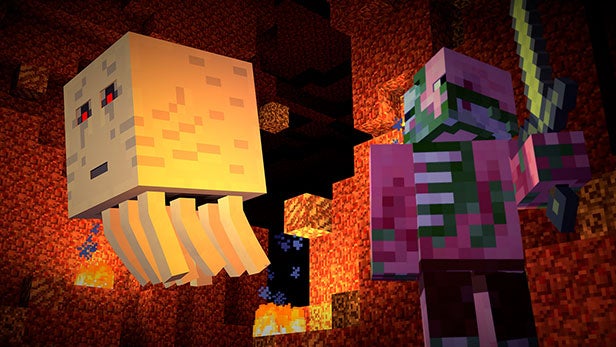 Your first experience with crafting in Minecraft: Story Mode is being asked to make yourself a sword. You’re told that you need two stones and a stick. Crafting the item I was presented with the traditional Minecraft crafting table. Align all your items in the right place and the sword pops into life and straight into the story.

The crafting focus is continued throughout the first episode of Minecraft: Story Mode. The game initially centres on what Axel, Olivia and Jesse will build at EnderCon – a block-building expo that sees the best team meet the legendary Gabriel.

The crafting helps bring humour to the game too, with some of the suggestions and end results constantly making me chuckle – and I’m not the biggest Minecraft fan either.

In terms of gameplay, there’s a lot of dialogue, but that’s inevitable with a Telltale Games’ title. Thankfully it’s amusing once you get past the opening slog before EnderCon and it never feels like a chore. 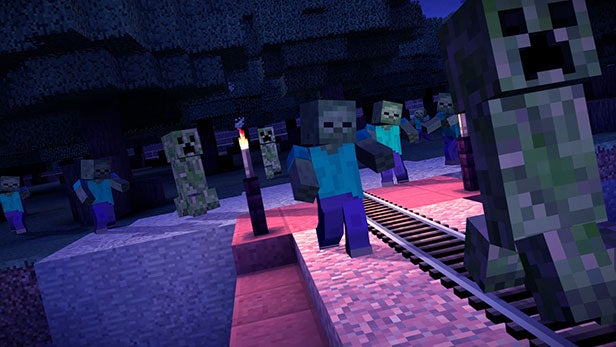 I did notice some oddities in the control scheme though, particularly in the exploration and selection methods. Attempting to select items can feel like you’re trying to play a PC point-and-click game with an analogue stick. And it’s a task that you’ll be faced with many a time in Minecraft: Story Mode. It feels more natural as you go on, but feels very foreign to begin with.

Another thing that put me off Minecraft: Story Mode  – and all Telltale Games titles are guilty of this – is the sheer abundance of Quick Time Events (QTE). It gets to the point where in action sequences, missing one QTE can cost you Jesse’s life. It’s very irritating that so much of the gameplay is based on QTE, but thankfully it’s not too distracting from the actual storyline.

Verdict
Telltale Games has done it again with Minecraft: Story Mode. I’m still not entirely sure how the developer managed to make an open world building game into such a fun and compelling story-based adventure but it certainly has.

I just wish there were a few less QTEs and a bit more player-controlled action.