The humble webcam is becoming fairly prolific these days. Not only is it virtually impossible to find a notebook without one, but they’re also making steady progress into consoles and even into some monitors. But the plain fact is that many computer users, especially those with desktop machines or older notebooks, like my ancient two-year old Dell, are left without (unless you’re a PlayStation 2 EyeToy owner, in which case you can get it to play nice with a Windows PC without too much trouble). Of course it’s possible to use your mobile phone as a webcam, but then you’re not only frequently left with bad quality and terrible adjustability, it’s often quite an effort to get it working in the first place. And though many compact cameras are also usable as webcams, you’re still stuck with similar disadvantages and a relatively bulky piece of technology on your desk. 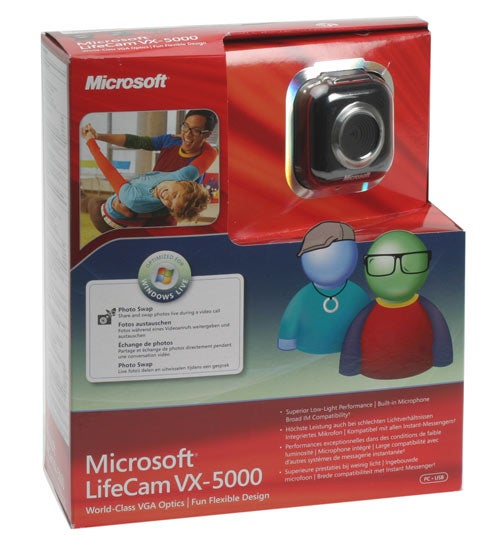 Which brings us back to the good old webcam, and specifically, Microsoft’s LifeCam VX 5000. It’s been a while since we reviewed a decent webcam, with the last one worth mentioning being the excellent Logitech Quickcam Pro 9000, but this little beast’s in somewhat of a different league. Available online for the very reasonable amount of £33 including delivery, it’s obviously not Microsoft’s highest end product, but judging by its specifications it should still be capable of a reasonable performance. 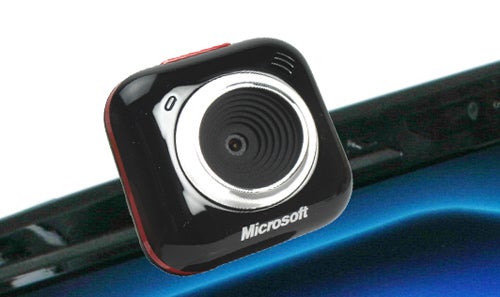 Getting the LifeCam out of Microsoft’s over-complex packaging reveals a very cute, compact little device. In fact, this is probably the least intimidating webcam I’ve come across, and for some reason reminds me of Wall-E (can’t get a better recommendation than that). The camera, body and lens form a little cube about the size of a DVI connector or two memory sticks side by side. The corners are rounded, and the lens is offset by a silver surround. The body is glossy black, with a thin, coloured strip around the outer edge, which we imagine would go well with Samsung’s Touch of Colour designs like on its SyncMaster T200 LCD Monitor. The colours available are Fire Red, Cool Blue or Lucky Green, oddly enough again the same ones that Samsung will be coming out with. Coincidence? No matter what colour you choose though, be aware that there’s a dim little blue activity LED just above the lens to indicate when the webcam is recording. 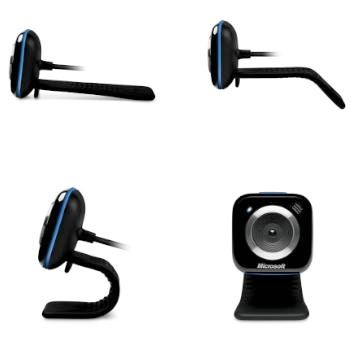 Both the build quality and design of the VX5000’s body are decent, but it’s the webcam’s unique leg that grabs the attention, or pretty much anything else for that matter. Microsoft calls it the Fun Flexible Base, and the amount of time I spent playing with it is quite (s) worrying (/s) remarkable. There are two solid ends, in between which is a flexible section that can be twisted into almost any shape, and the whole thing is coated in lovely soft-feel rubber. This, combined with the horizontally-swivelling head, makes the LifeCam very easy to attach to a monitor or place in almost any position on your desk.

Of course ergonomics aren’t everything. As usual, you should install the relevant software before hooking the VX5000 up to your PC – in this case Microsoft LifeCam, which works with its entire range of webcams. Setup is a breeze. You can spend some time adjusting the settings for optimum image quality, though you can change settings like sharpness, hue and white balance at any time. Once everything’s configured, the software’s interface is quite stylish and very intuitive, albeit rather basic. Aside from the dashboard, which is switched off by default, there are only four ‘buttons’. The first three start/stop video capture or audio recording, and take still pictures. The last one lets you access the folder where these files are stored, which seems to be set to a fixed location; I’ve no trouble with Microsoft making things simple, but not being able to change this folder’s location is going a bit far. 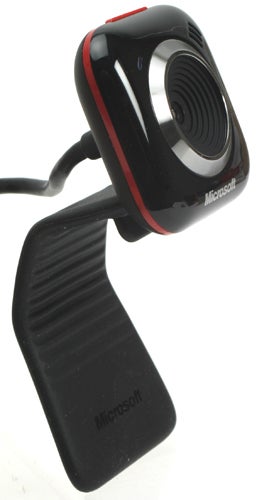 Things are similarly limited with the photo-capturing system. After snapping a still you get to see a preview thumbnail which you can edit (sending it to your default photo editor), attach it to an email, or upload it to Windows Live Spaces. But the experience is hindered rather than helped by the extremely simplified interface: for example, an arrow button to switch between shots would have been nice, as would a delete button.


The dashboard, meanwhile, gives you access to the settings and adjustments in one tab, and various ‘effects’ in the other. The effects are purely a gimmick, but might be entertaining for a while. There’s everything from animations of electricity jumping across the screen, to footballs bouncing around. You can have a bee buzzing around some flowers in the corner, or go around calling contacts with the rain animation turned on and singing at them. There’s a lot of choice, but I can’t help thinking Microsoft could have done a slightly better job on the generally poor artwork and cheap animation, quite aside from the lack of flexibility and options in its LifeCam software overall. 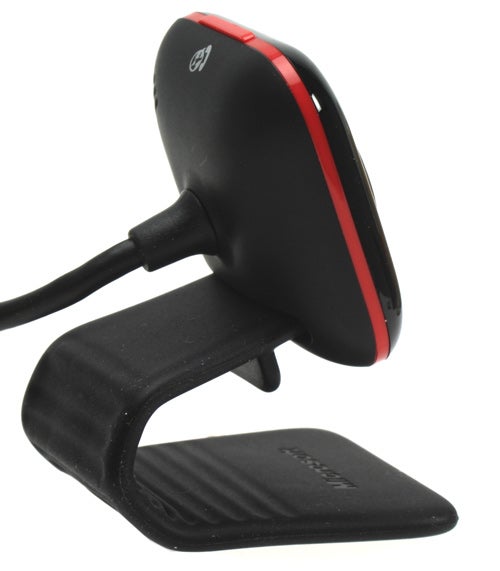 Naturally, the single most important aspect of a webcam is its image quality, and here the 1.3-megapixel VX5000 holds up well enough. Considering its affordable price and maximum 640 x 480 video resolution (it can capture stills at 1280×960), images are quite sharp and show a fair amount of detail. The camera displays some slight lag with fast motion, but little to no blurring.


One small detail worth pointing out is that if your environment uses fluorescent lighting, there will be some slight flicker over your face, though it’s much reduced when running the camera at 50 rather than 60Hz. This is not a fault with the LifeCam, but rather an effect of those nasty fluorescent tubes which, imperceptibly to many people’s eyes, flicker all the time. The webcam’s lowlight performance is adequate, though motion becomes slightly more blurry and there’s some detail loss due to the automatic exposure levels being too high. 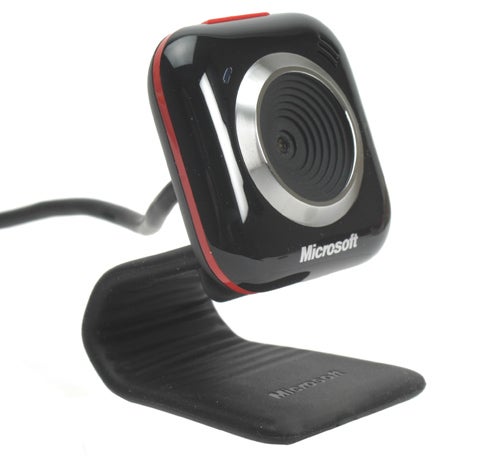 The inbuilt unidirectional microphone also does a fair job, though even at its most sensitive setting you don’t want to move too far away since it has some difficulty picking up quiet sounds. A few final hardware details include a button on top of the webcam – which is far too easy to press accidentally while adjusting – that brings up Messenger contacts to video call with. Cable length is a generous 1.82m, so it should be able to reach no matter where your computer.


The fact that the word ‘fun’ is mentioned several times on the Microsoft LifeCam VX5000’s specifications page should tell you all you need to know. This is a light, compact and easy to use webcam which doesn’t go beyond the basics, but does those well. It’s a shame that the cheap bundled software is aimed at 12-year olds.