It’s not something that you might have noticed but webcams are an area of technology that have collectively really improved over the past few years. Having experienced poor quality, stuttering images in the past, many people have dismissed the whole concept, but since PCs and the broadband connections have got faster, and since webcams are now pretty decent too, video conferencing or webcaming, a word I have just made up, is now pretty great. There are now also a variety of free video services to choose from, such as Windows Live Messenger, Skype, Yahoo and AOL – which is a lot better than it used to be when you just had Netmeeting, buried somewhere in Windows 98. 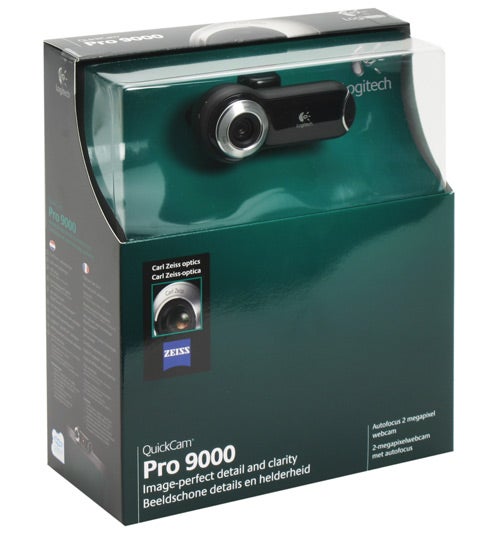 Now if you’ve got a laptop, there’s a chance that you’ll have a webcam built in, which is certainly preferable in terms of convenience and absence of cable clutter. However, many laptops and virtually all monitors don’t have one so an external one it needs to be. Logitech has a huge range of PC peripherals and has long been a champion of the webcam, and we’ve seen some excellent examples from it such as the Quickcam Ultra Vision.


The highlights of the Ultra Vision were glass lens elements, a 1.3 megapixel sensor, and Rightlight and RightSound – light optimisation, and noise cancelling technologies. Both of the latter are present on the newer Quickcam Pro 9000. The long rest at the back means that it’s not really smaller than the Ultra Vision, but it is lighter and less bulky making it more suitable for taking it with you if you’re carrying a laptop. However, should you need to take your webcam with you regularly, there’s a specific version of it for notebooks with a clip. 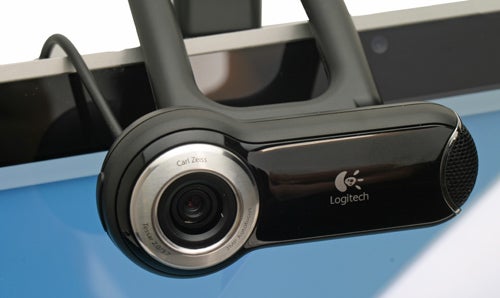 As it was, I found getting the rest at the back to fit snugly to the back of the laptop I wrote this review to be a bit of a dark art, but I got there in the end. As it happens the webcam isn’t sitting correctly on the display on the pictures, but actually there’s a small plastic lip under the main body of the webcam, which you rest on the edge and you then bend the stand so it rests on the back of the screen. You can then angle the webcam up but not down. It’s not quite as flexible as the rotating lens on the Ultra Vision, but it’s close.

The web cam lens is bulbous with a larger circular lens and a microphone at the end of a section that extends to one side. The lens has the legend Carl Zeiss inscribed onto it, which is a marketing tool that Sony has been exploiting for some time now on its still cameras and even its phones. This promises better quality images through superior optics, which is really more important than huge pixel counts. However, the pixel count is still impressive on this webcam, with a native resolution of 2-megapixels, taking it above even the 1.3-megapixels offered by the Ultra Vision. It also features an autofocus internally though, which promises to ensure sharp pictures even with moving subjects.


At the side of the camera is a button which when pressed fires up the Logitech QuickCam software, if installed, and automatically takes a snapshot. At the other end to the lens is the microphone, which looks pleasingly large. In the middle is the Logitech logo and when the webcam is live a circular red glow illuminates round it, which is a nice subtle effect. 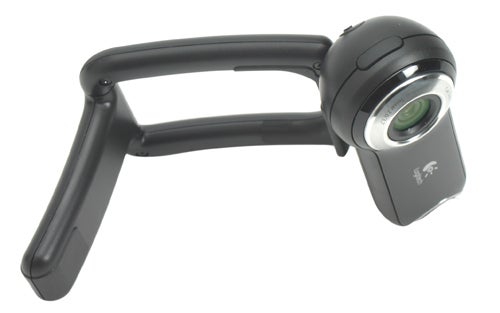 When it came to installation you need to install the software first. I chose to download the QuickCam software from the Logitech website to be sure of getting the latest version, though the wizard on the disc will check for this as well. While the installation went smoothly I found for some reason that the Logitech mic was not visible or selectable from the Logitech web site wizard. This was strange as the microphone driver was present and correct in Device Manager. I took this as an opportunity to test out Logitech’s tech support.


First, I was pleased that the number to call was a regular UK number, and not a non-geographic number, so it could come out of my free phone minutes. Second, when I dialled I got straight through to a person after two rings. I was in shock! I was expecting a soul destroying run around a Esher-like call system. Even more amazingly, the person was able to get the mic working by talking me reinstalling the driver via Windows – it seems it was a Windows XP issue. Tech support taht worked. Even more shock! Overall, I was mightily impressed with Logitech tech support, which makes a refreshing change from most companies these days. 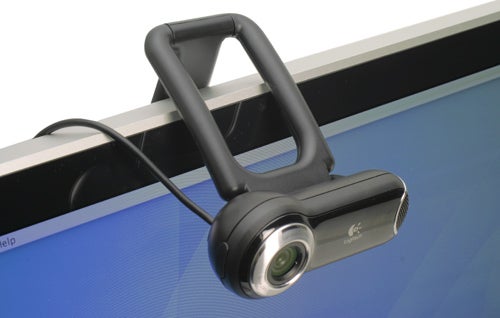 Once up and running I took a look at the Quickcam software. It’s identical to that I saw with the Ultra Vision. QuickCapture lets you take pictures or videos. Pictures can be taken at up to 8-megapixel, with anything above 2-megapixel involving software interpolation, so pretty pointless. I noticed that at anything above VGA resolution, there was a delay in taking the picture, longer as the resolution increased, causing shutter lag. A 3-second delay option is available and the red circle flashes while it counts down and then stops just before the picture click sounds.

Video can be recorded up to 2-megapixels and there’s a motion capture setting, which as its name suggests, monitors for motion and only records when there’s activity, with a sensitivity slider provided. It works well and could be perfect for catching that thief swiping your Jaffa cakes, assuming he doesn’t spot the camera and laptop and nab those too. Assuming he doesn’t, you’ll find these videos marked with a running man icon. You can then play, email, print pictures or delete right from the software.


Looking at the settings gives you access to enable Face Tracking, and to activate the RightLight technology. You can adjust manually though if you prefer. You also get the Video effects avatars, which I found were just as much fun as I remember them. This means you can replace your face with a virtual gorilla, dolphin, dinosaur, dollar bill, or whatever else you fancy – it’s just ‘crazee’. Loads are available free online. As long as your face is lined up correctly, the avatar’s mouth and eyes even mimic yours. 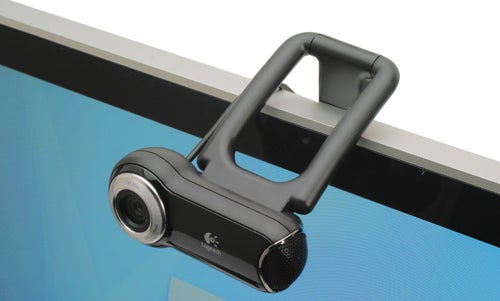 Aside from the small hiccup with the installation, using the webcam was a joy. To test, I first fired up the QuickCam software. I was immediately impressed by the sharpness and clarity of the image and it’s up there with the Ultra Vision as the best I’ve seen. The effect of the auto focus could be seen when zooming in, with it readjusting itself impressively quickly. If, for example, you want to keep moving kids as clear as possible in the frame this should be a big help. Face tracking does work, with some delay as it tracks you, and I found the effect dizzying to watch. It’s best to stand still.


I then placed a video call to Ed in the office and found he was suitably impressed by both picture and sound. The RightSound is genuinely effective at filtering out background noise, to a degree, and RightLight does make the best of dimly lit situations without you having to do anything.


All in all, if you want to make the best of your webcam experience, be in an occasional call, a video conference or ‘lifecasting’ heaven help us, then it’s hard not to be impressed with the Pro 9000. It may cost a lot more than your bog standard webcam but you are getting a premium product that delivers the goods.


An impressive webcam that easily justifies its premium price. It can capture and record high resolution images, and gives excellent pictures and sound in video calls. Being that bit more portable than the bulky Ultra Vision, the Pro 9000 is my new favourite webcam. Also, hats off to Logitech for an excellent performance from technical support.