Available on Xbox One, PS4 (version tested), PC
Codemasters’ revival of its nineties console classic wins big on short-term nostalgia, but not so much on its gameplay or long-term appeal. It’s a game that trades on half-remembered pleasures of twenty-five odd years ago, with its eight-bit character portraits and the mocked-up covers of vintage gaming magazines you’ll spot around its courses, but hasn’t got the substance to bring them back. I wouldn’t call it a total write-off, but it’s not the return fans might have wished for.

There’s nothing actually that much wrong with the basic racing, which sees tiny toy monster trucks, police cars, hovercraft, dumper trucks, tanks and more facing off on a series of household tracks running through kitchens, greenhouses and games rooms. The top-down view and relative steering take some getting used to – and was the handling really this skittish first time around? – but there’s a decent sense of rough and tumble to the racing, while the Nerf-branded weapons add a little extra aggression to the mix. 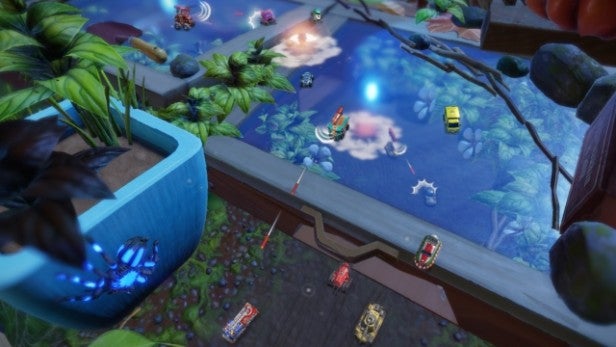 The courses are inventive, too. Some have you speeding around messy kitchen tables, dodging a whisk and the mess of a massive bake-off or the residue of a breakfast fry-up. Others have you racing through a greenhouse and around an icy pond, around a tool-strewn workshop or across pool and air-hockey tables. Vehicles get electrocuted, burnt, sawn apart or crushed, while tyres smear sauce and icing across the track surface and a hungry dog gazes up from below. All toy and radio-control racers benefit from this miniature perspective to some extent, but World Series really makes it feel part of the fun.

Even the visuals are perfectly solid, with a nice balance between cartoon style and realistic texture and some decent effects. There’s nothing special about the music, and the repetitive voice samples soon get annoying, but poor presentation isn’t one of this game’s major faults. 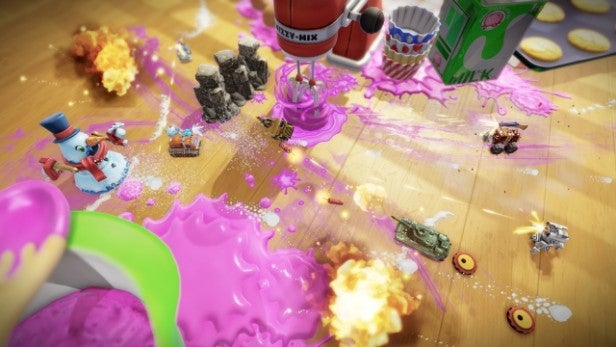 What is, then? Well, problem one is that the basic racing isn’t necessarily the focus here. Instead, Codemasters seems to have spent a lot of its resources on a battle mode, complete with deathmatch, control point, capture the flag and bomb delivery game styles. Each vehicle has its own feel and its own set of three capabilities, some offensive, some defensive, some healing. Missiles are launched, turrets deployed and helicopters sent to harass your opponents. The different craft seem well-balanced, with each supporting different styles of play.

The battlegrounds do more to keep things entertaining. What other game sees tiny cars duke it out on a Hungry Hippos game board or take shortcuts with the flag through a pool table pocket? All in all, though, the action’s a little flimsy and forgettable. Micro Machines isn’t ready for the eSports limelight yet.

Problem two is the risible lack of single-player content. You can try out individual races and battles – plus a third elimination mode – but there are no championships or events to play through, and so no reason beyond practice to keep coming back for more. The same goes for local multiplayer, which is more fun but still not all that engaging for more than an hour or so. 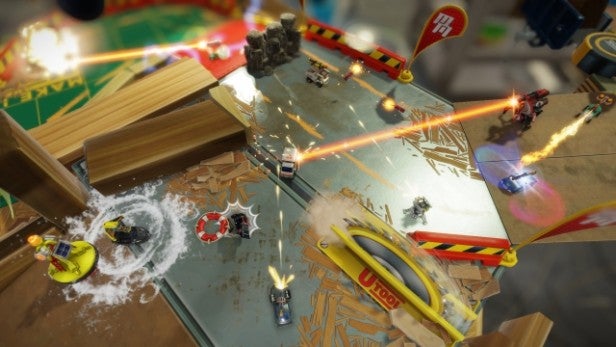 The meat of the game, then, is in its online modes. In the initial ‘Just for Fun’ mode you still compete in single races, battles and eliminations, and the matchmaking’s speedy and effective, with CPU players dragged in to fill any holes. This is unquestionably where Micro Machines is at its most fun, with up to twelve cars on the course and plenty of mayhem, but with no championships or chance to continue for another race there’s a feeling that you’re getting nowhere fast. You level up with experience and unlock loot crates with new markers or voice samples, but there’s not enough here that you might call compelling.

Hit level 10 and you can race in ranked matches, while scheduled online events offer some hope of a stronger game, but overall World Series is a game devoid of major hooks. In fact, with just ten tracks and no real structure it soon feels like you’ve seen its best. And that’s where we come to the final problem; the £25 asking price. Were Micro Machines: World Series around a tenner, I might just forgive its borderline non-existent options for solo players and its general lack of content, but for £25? Forget it. That’s too much for too little, and that little isn’t really good enough.

Verdict
Talk about a squandered opportunity. There’s nothing much wrong with the graphics or the rough-and-tumble arcade racing, but the new Micro Machines hasn’t got the single-player mode to pull players in or the multiplayer content required to keep them there. There’s a sorry sense of ‘will this do?’ about World Series. While the nostalgia factor is high, the rest is a letdown.