Metal Gear Survive isn’t a Metal Gear game. It may have the name and a similar aesthetic, but aside from trying to use the franchise and some trinkets that come with that to entice people in, it doesn’t connect to the series in any significant way. Instead – as opposed to the stealth action genre in which it fit so comfortably before – we now have a survival experience where your main goals are staying alive and trying to rescue your friends.

As you’d imagine, there’s a very over-the-top and bonkers storyline in place that ties this all together. Focusing on wormholes, infections and inter-dimensional travel, it makes as much sense as you want it to. Trying to keep up with its many edges is a job all in itself. In this regard, Survive is very much part of the Metal Gear family.

It certainly isn’t the be-all and end-all, however; the spotlight is without doubt shining on what you’ll actually be doing. This is somewhat an issue at the start: it’s overloaded with mechanics and systems that make it quite difficult to unravel initially. You hunt animals, ensure you’re hydrated, and kill ‘Wanderers’ – Survive’s main enemy. However, events feel deliberately slow-paced and convoluted, and therefore, a bit boring. 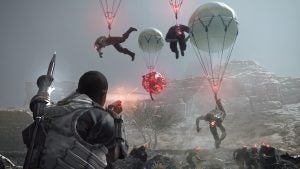 This is probably the idea, since the atmosphere behind the latest Metal Gear seems to be of great importance to Konami – and it’s somewhat intimidating. There isn’t a hint of anything resembling a bright colour, and despite being allowed to roam around in a vast environment, everything feels rather claustrophobic. That’s a plus, in many ways, since it keeps you on your toes. The problem is that it can easily become too much early on as you repeat the same process over and over again.

Like most survival games, Survive wants you to get into a groove of base-building to acquire more materials, so that in turn you can continue constructing. The crafting system is a nice touch – it puts more power in your hands – but going through the motions can be draining if you’re not engaged by its wash, rinse and repeat approach.

It isn’t as if combat changes this much up, either. While you may be expecting a good dose of stealth to be important, the reality is that you need to keep your hunts varied. A solid sneak attempt can pay dividends, but it can also trigger an entire horde, sparking attempts to frantically erect more buildings in an effort to stay alive. It raises the tension well, but whether or not that makes for a good video game will vary wildly. It never really feels overly fun. 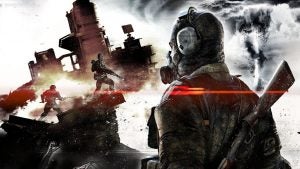 Naturally, you’ll also be able to upgrade your hero to be better equipped in the wilderness, which once more ties in to the repetitive nature of Survive. Once you’ve ticked all the boxes for another day, and can successfully say your heart is still beating, it’s back into the menus to level-up and hope you can continue to plough forward. Saying it’s bleak would be the understatement of the year.

You can, of course, balance this out by heading online and teaming up with three friends. As you’d imagine, this does increase the entertainment value. Here, the concept is more about fighting off waves of attackers as a unit, with each challenge being significantly harder than the last. Do well and you’ll be rewarded. Fail, and you’ll be left with the stench of a loser. It’s a shame that the main experience can’t be played out in co-op as that may’ve been the levity needed here, but it’s still where the main spark of ‘fun’ can be found.

So Survive is somewhat of a slog, but there are flashes of brilliance along the way – depending on the kind of scrapes in which you find yourself in. You can never be too sure about what you’ll stumble across, and finding a way around any obstacles in your path without dying is satisfying – much credit should be thrown Konami’s way, given how different this is.

The flipside to that coin, as mentioned, is the reason it’s called ‘Metal Gear’ to begin with – aside from the obvious. Everyone would have been better off following Rockstar’s example with Red Dead Redemption: Undead Nightmare, offering this up as an add-on to Metal Gear Solid 5 or a spin on what’s possible within that world. Trying to identify it as part of the series – even with a new subtitle – almost seems at odds with the premise. 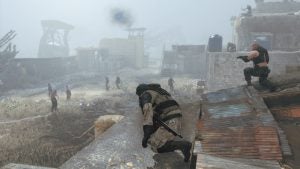 Survive does embrace what the survival genre is all about, and if that idea and the franchise’s look floats your boat then you’ll probably be pleased. Remember, though, that you always have to be online, and that microtransactions feature heavily. Even creating a new save file – if you don’t want to delete your original – will cost you, and how that’s a good idea when the rest of the game is so hard-going is anyone’s guess. Everything about Survive just feels a little too dry for its own good.

If that hasn’t put you off, though, the latest Metal Gear does feature the odd highlight and will hit your satisfaction glands when all goes the way it’s meant to. You’re just unlikely to smile about it – but nor are they meant to.

Metal Gear Survive is a brave move for Konami and a decent survival game – it’s just not particularly fun. If you like the more abrasive side of the medium, give it a go. Everyone else should probably stay away…