Some earphones have detachable cables. It’s a rarity but one we lap up, as it saves us from that sad day when the sound from one of the earbuds starts crackling away before dropping out altogether, never to be heard again. The MEElectronics SP51P use detachable elements, but it’s not the cable this time. It’s the back of each bud. These Franken-phones offer three sets of metal bass ports to customise the sound of your IEMs. In truth, we have seen such ingenuity before, in the shape of the Sleek Audio SA1 and their bigger brothers the SA6s, but never on such a budget model.

At first glance, the MEElectronics SP51P earphones appear normal, with a metal-bodied bullet-shaped look that’s reminiscent of Denon’s trusty old AH-C751 buds. But these are no ordinary earphones
. 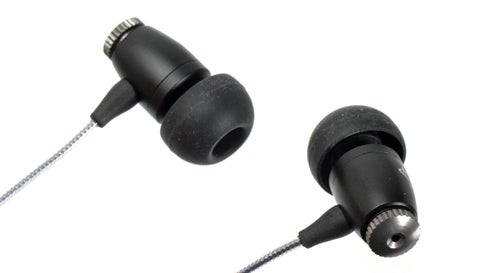 These noise-isolating buds will allow you to perform brain surgery on them, changing their sonic personality with metal screw-in bass ports, like flipping over the top of someone’s skull and popping a new brain in. Three sets of bass ports are included, intended to give you a neutral, enhanced and extreme bass response respectively. They’re colour coded too – silver for the easy-going port, grey for the middle contender and black for the tub-thumping lunatic at the back.

Including removable elements like the SP51P bass ports is always a questionable option, as the necessary friction involved in attaching and removing these elements encourages wear, potentially reducing the product’s lifespan. Both the earbuds and ports are made from metal here though, more hard-wearing than the plastic materials we’re used to at this mid-range price point.

Treated with a modicum of care, you needn’t worry about the threads going on the ports, unless you’re going to flip between different bass “personalities” daily – and in our experience you won’t. The greater worry is losing the little rubber ring that sits at the end of each bass port. It creates the seal with the bud, so you’re royally up the spout if you lose one.

Hardy and strong as the buds are, there is a disconcerting crackle when the IEMs are inserted into your ears. This is caused by flexing in the diaphragm of the 10mm dynamic driver, and tends to be something we hear in earphones of less-than-spectacular build quality. This worry aside, the MEElectronics SP51P feel hardier than most bigger-name rivals, such as the plastic-bodied Denon AH-C452.

The “P” of this model’s name indicates that it includes a microphone housing for use as a hands-free kit with smartphones. The housing for these extra components is a simple black metal affair, with no screw-in elements – with a call button in-tow.

For a pair of earphones with an outlandish premise, the MEElectronics SP51P are surprisingly tasteful in their looks. Unfortunately, they’re most aesthetically pleasing when the black “extreme” bass port is applied – and that just happens to be the port we’d nigh-on never use. But more on that later.

Our cynical side’s first assumption was that the MEElectronics SP51P core design feature, the removable backs for each bud, was a gimimick designed to make them stand out against bigger names in a crowded market. While that may still be the case, we can at least confirm they work.

Each type features a different inside, giving the sound a different environment to brew in. The “extreme bass” ports offer the largest area, while the other two narrow things down. 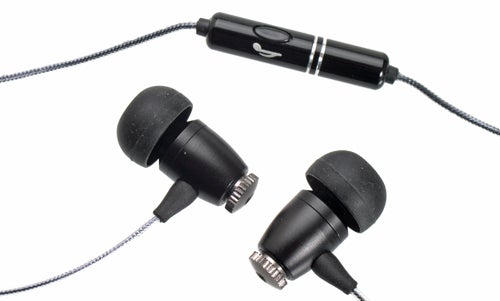 Surprisingly, they all sound reasonable, though the extreme bass wasn’t to our taste, coating vocals and other similarly textured sound in a wallowing, low-mid goo that doesn’t sound balanced or particularly natural. Kick drums cause boomy aftershocks too, telling you that these black extreme tuning ports are overdoing it a bit.

And for all the bombast of the low-end, it doesn’t actually extend that far down – that sense of near-throat-rumbling sub-bass some earphones can create isn’t here. Still, at this price it betters most bass-obsessed buds.

We have a sneaking suspicion that the drivers are more tailored towards the mid-level greyish tuning ports though, because overall sound quality improves significantly when they’re applied. The bassy gunk is removed from the sound, like blasting a muddy tunnel with a pressure hose. Bass presence is much leaner, but clarity is significantly improved. And there’s still enough low-end muscle to lend bass guitars, drums and larger string instruments the right tonality and gravitas.

Switching to the bright silver tuning ports reveals less dramatic sonic advantages. Bass takes a further step back, taking with it a little warmth from the sound. It’s not sibilant and is a little more balanced than with the grey enhanced bass ports, but also a bit less fun – and a touch more fatiguing. Which you’ll prefer out of the two lesser-bass ports will depend on your personal taste, and perhaps even mood, but with them the MEElectronics SP15P sound accomplished, detailed and musical – easily enough so to more than hold their own in their price bracket and some way beyond.

Lovers of bright-sounding, super-detailed earphones may be better off with the similarly metal-bodied Hifiman RE0 earphones, which offer a superior high-end and better separation, but at the price the MEElectronics SP15P perform extremely well. It’s a shame that, with their tuning port concept, they’re likely to appeal to basshead buyers rather than those after a more neutral “decent” set of earphones.

The MEElectronics SP51P offer three different tonalities thanks to the trio of tuning ports included in the package. Avoid the top end “extreme bass” one and you’ll be laughing, with a fairly balanced, bassy and detailed sound at a good price. Metal-bodied earphones rarely come this cheap, and while the plasticy cable and cracklesome diaphragms don’t exude class, these are hardy ‘phones.