The Meater Block is a hub for a quartet of wireless meat probes. It doesn’t need a smartphone to work, thanks to the integrated touchscreen. It isn't without a few frustrations, though, including unreliable connections over Wi-Fi and difficulty spotting the difference between probes. Without these issues the Meater Block would be a must-have kitchen kit; as it stands, the Meater Block remains useful, ensuring perfectly cooked food every time.

Temperature probe users rarely return to cooking by intuition and timer alone – once you’ve experienced the joy of a perfectly roasted chicken or tender meat, why would you regress? However, there’s a problem with probes: you likely to have only one, meaning only a single person will be in receipt of that perfectly cooked medium-rare steak.

This is presumably the reason the Meater probe wireless thermometer is now available as Meater Block. Its four probes are monitored via a chunky wooden base that will alert you when dishes are done, so you don’t have to take your smartphone or tablet to the kitchen or watch the oven like a hawk.

Meater Block design – The built-in screen means there’s no need to take your tablet or phone into the kitchen, but it’s yet to reach perfection On paper, the idea of Meater Block is fantastic: not only does it store and charge four wireless thermometers, it includes an OLED touchscreen that you use to set and monitor each one. It displays the temperature of each, making you aware when your meat has reached the point it’s ready to come out of the pan or oven. Unfortunately, in this standalone mode – without connecting it via Wi-Fi to a device and the Meater app – there are a few things that let it down. The first is that each Meater probe looks the same at first glance. Numbers 1, 2, 3 or 4 are etched on the end but trying to see which is which in a hot, spitting pan isn’t easy. I inserted two into a pair of steaks I was cooking, and even though I inserted both at different angles to try to differentiate between the two, by the time the steaks had been turned around in the pan a few times, I had forgotten which steak was meant to be medium and which a medium-rare.

As such, when Meater Block said it was time to remove one from the pan, it was pure guesswork. Both steaks ended up looking pretty similar inside (and reached temperatures of 54ºC and 55ºC before starting to cool).

This mix-up makes you wonder why the makers haven’t plumped for different colours at each end, or more obvious numbers. There’s also meant to be a built-in speaker to alert when a probe wants you to finish cooking, but the unit on review stayed quiet throughout.

Another issue is having to charge the probes with four AA batteries, despite the existence of a micro-USB port (note that there’s no cable supplied to use it). While the batteries supply up to 50 hours of continuous cooking for the probes, it feels like a missed opportunity to minimise waste and fuss. Probes are charged via AA batteries, which feels like a missed opportunity

Meater Block features – Planning on a longer cook or a barbecue? Getting and sustaining a wireless connection can be a challenge

The standalone mode of Meater Block is great for those without a smartphone, or folk who don’t fancy wiping grease off the screen. However, to get the most from the Block it’s essential to connect to the app via Wi-Fi. It opens up a whole world of assisted cooks and online sharing, as well as guidance for inserting the probes, and makes the probes easier to monitor. It will even link to Alexa via the Meater Cloud and give you infinite range; theoretically, you could pop next door without worrying about burning the roast.

However, in practice this is harder to achieve. I found that connecting the Meater Block to my home Wi-Fi took several attempts over the course of 20 minutes, eventually requiring that I park myself right next to my router.

There were several issues: as well as frequent disconnections during the roasting, the app didn’t settle on an estimated remaining cooking time at any point. This meant I was unsure of how long the chicken would take to cook. No resting time was provided, either. Meater Block also kept going to sleep and disconnecting the probe. 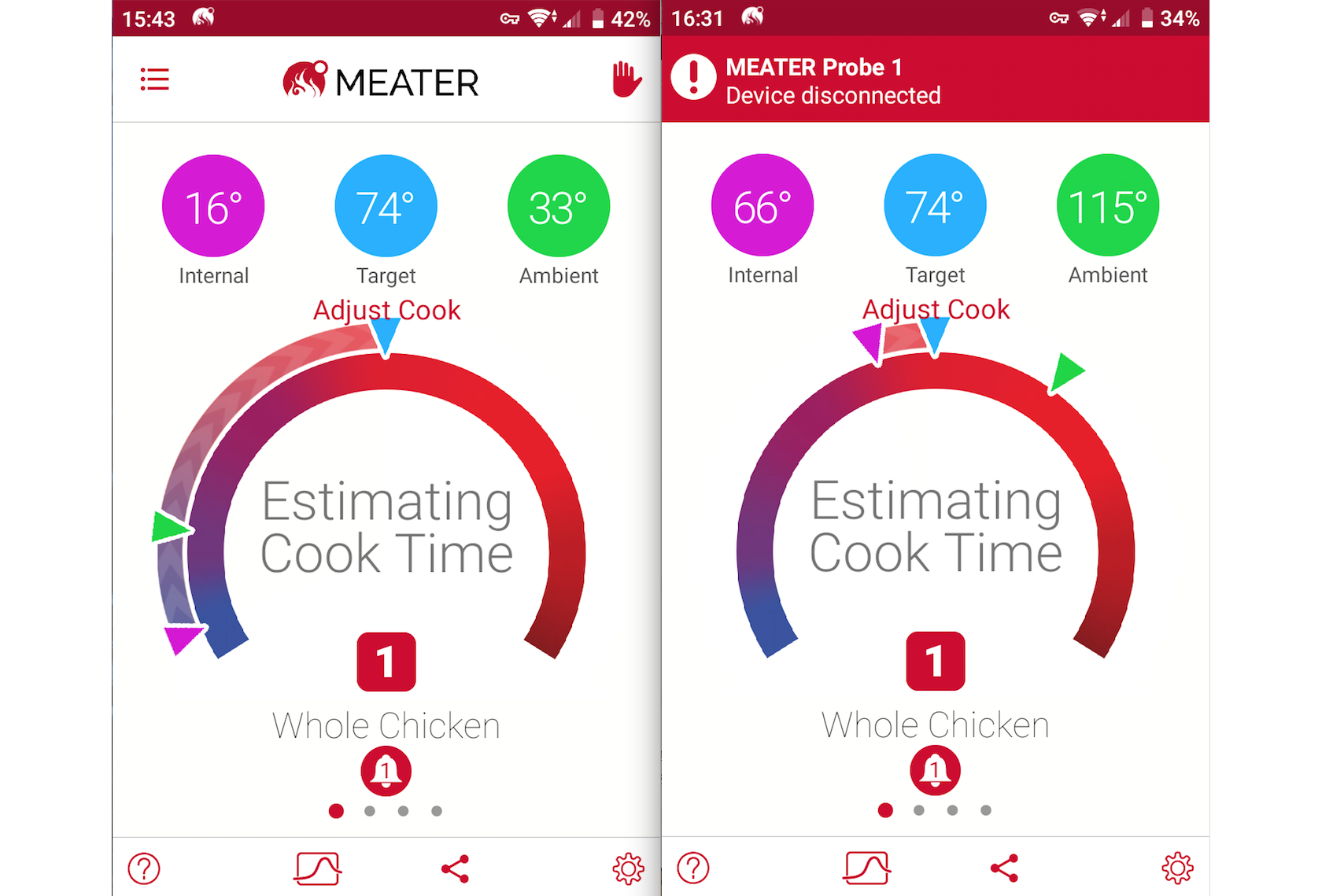 Should I buy the Meater Block?

While there are still some issues with regards to the Meater Block’s functionality, when it does work, it’s undeniably handy. Not only does it help you cook to perfection, but its four wireless probes also lend themselves well to a multi-meat barbecue, where inconsistent temperatures could lead to charred or unsafe food.

Another plus is that it’s compact enough to fit in a kitchen drawer but looks equally stylish out on the worktop. For existing Meater fans, it should prove a versatile move on from a solo probe once it’s had a few tweaks.

Unfortunately, in its current state it isn’t reliable enough for novice cooks, who would be better with the original Meater probe wireless thermometer that connects directly to the app.