What is the Meater Probe Wireless Thermometer?

Meat probes have put an end to dry Sunday roasts and imperfectly cooked steak, but all come with a flaw: either you need to keep checking the display to see what temperature your food has reached, or you need to thread a cord through your oven door that attaches to an external monitor. The Meater Probe Wireless Thermometer tackles both issues.

This device is wireless, working via an app by either Bluetooth or Wi-Fi. The latter is more complicated, since it requires additional hardware. You can either use a second smartphone or tablet located within Bluetooth range (10 metres) of the Meater, using the Meater Link in-app feature to broadcast temperatures over your Wi-Fi network; or, there’s the upcoming Meater Block, which lets you monitor up to four temperature probes.

Ultimately, going wireless means that you can monitor how your meat is cooking without being in the kitchen, and it also puts an end to trailing wires.

The Meater is as close as you’re going to get to a ‘stylish’ thermometer probe. Clad in stainless steel with a ceramic handle, it’s slim and sits in a wooden charging box when not in use. An LED shows when it’s charged and ready to use. The box is magnetic, so can be stuck to a fridge door.

Apption estimates that you can cook for 24 hours continuously between charges and the Probe’s AAA battery should last for 100 charges. 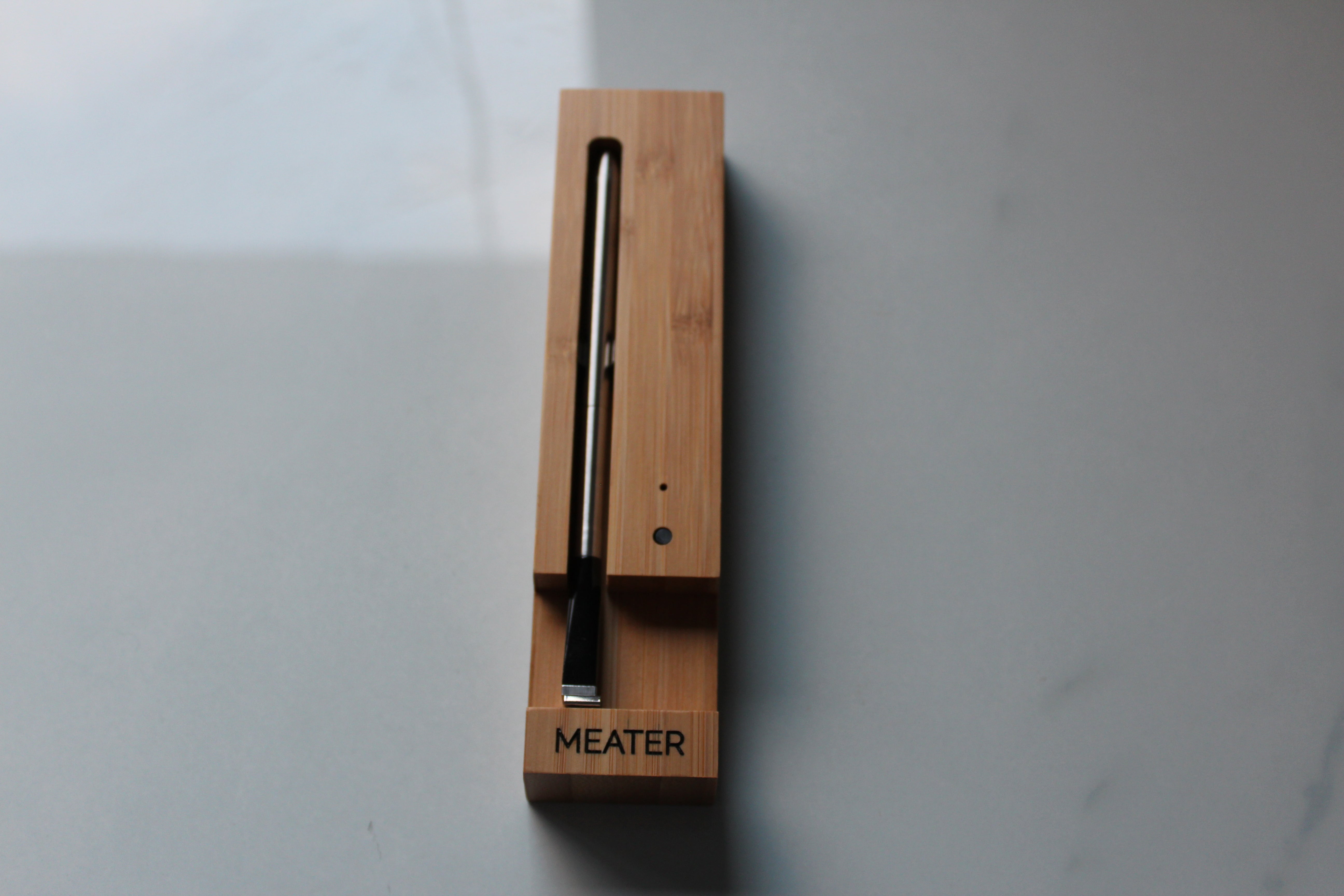 The probe contains two temperature sensors: one for inside the meat (which goes up to 100ºC) and one for outside (up to 275ºC). The thermometer has to be inserted into the thickest part of the meat past a line on the Probe and, when paired with the app, this displays ambient, internal and target temperatures.

The app includes links to recipe videos for different meats, adjustable cooking with options for the same meat (for example, well-done to rare steak), tutorials, a manual mode and a choice of Celsius or Fahrenheit.

Meater Probe Wireless Thermometer – What’s it like to use?

The Meater Probe pairs only when it’s removed from the charger, and it paired first time with my Android phone. Finding my way around the app wasn’t as intuitive as it could be – there are tutorials, but they’re in the Help section rather than up-front. I referred to the recipe videos on YouTube to get started.

First, I used the Meater Probe to roast a 1.2kg chicken. Referring to the video, I preheated the oven to 150ºC (lower than the 170ºC I’d usually select), and inserted the probe into the centre of a breast. Then I set my options using the app, choosing poultry, a whole chicken, then how much I wanted it cooked.

Next I chose the USDA safe option (the app is American), which set a target temperature of 74ºC. A nice touch is being able to save this set of options as a ‘favourite’ if you’re happy with the results, eliminating the need to re-enter the same selections time and again. Also handy is that you’ll be told how to insert the probe each time. 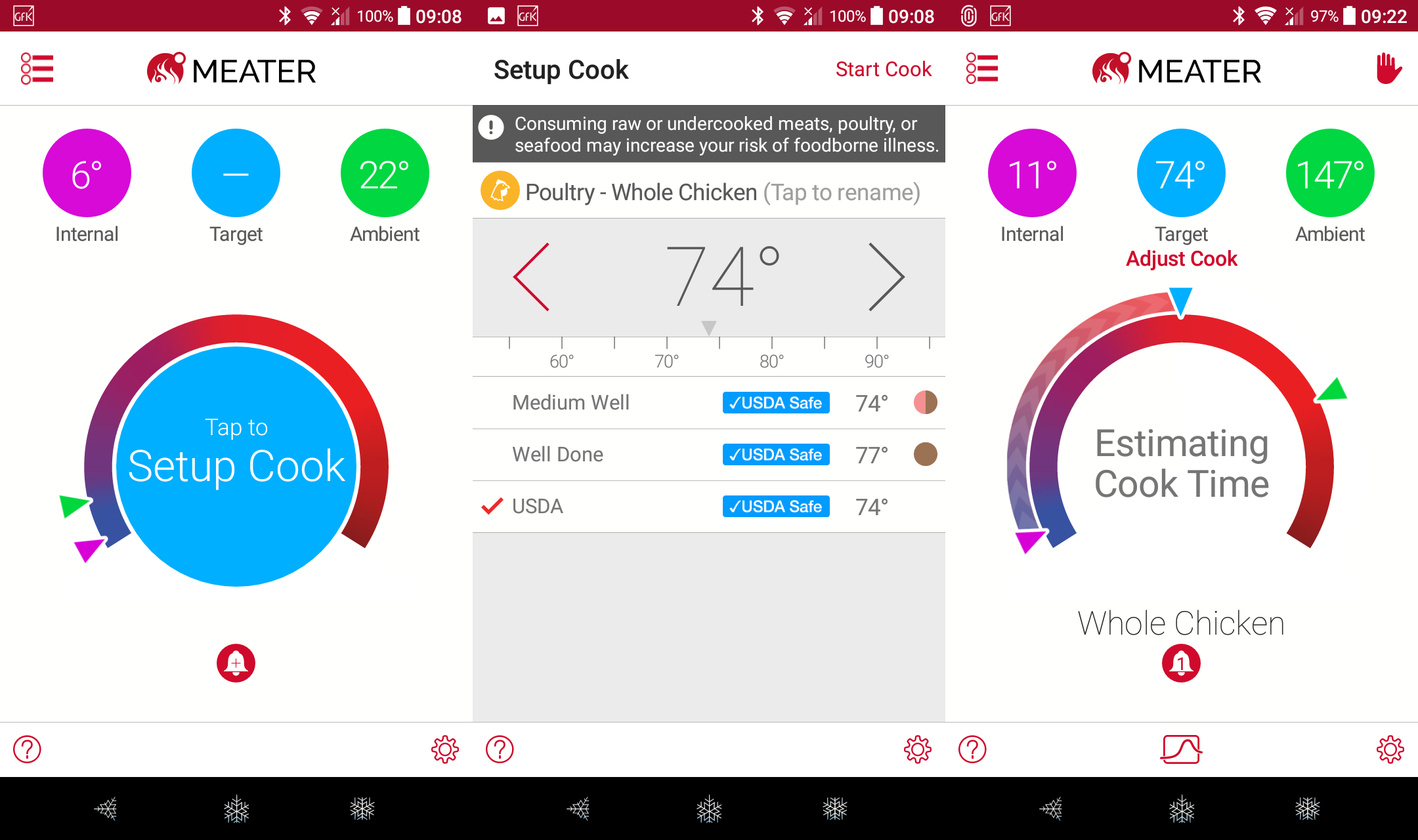 There was no pop-up to indicate at what temperature I should set the oven once I’d entered all the above details, which would have been useful. The app simply started to display temperatures.

Placing the chicken in the oven, the app estimated the cooking time – although this did change a few times, dropping from 1hr 12 mins to 1hr 7 mins in seconds. It was interesting to monitor the temperature reported by the probe as the chicken cooked, although its internal temperature rose slowly.

Worried that my oven wasn’t maintaining a consistent temperature, I nudged the controls up to 155ºC for the last 10 minutes of cooking. The app sent out notification five minutes before cooking finished, and it advised removing the chicken from the oven before the internal temperature hit 74ºC.

The chicken legs were pale, but it was golden on top. The app instructed me to let the bird rest – initially for three minutes but then this period was extended. While resting, the internal temperature rose to 77ºC, and the app deemed the chicken overcooked.

Confident cooks will likely have to adjust to using the Meater Probe; it was initially hard to trust. However, the juices from the meat ran clear, and inside the chicken was clearly cooked. Next, I cooked a steak using one of the tutorial videos. This advised searing the meat in a pan then oven cooking.

Inserting the probe into a medium-thick cut of sirloin without ripping it was a challenge – mainly a result of the probe’s thickness. Next, I used the app to select the medium-rare setting, which sets an internal target temperature of 57ºC.

Searing the steak with the probe in place was simple enough; the probe didn’t get in the way of flipping the meat. 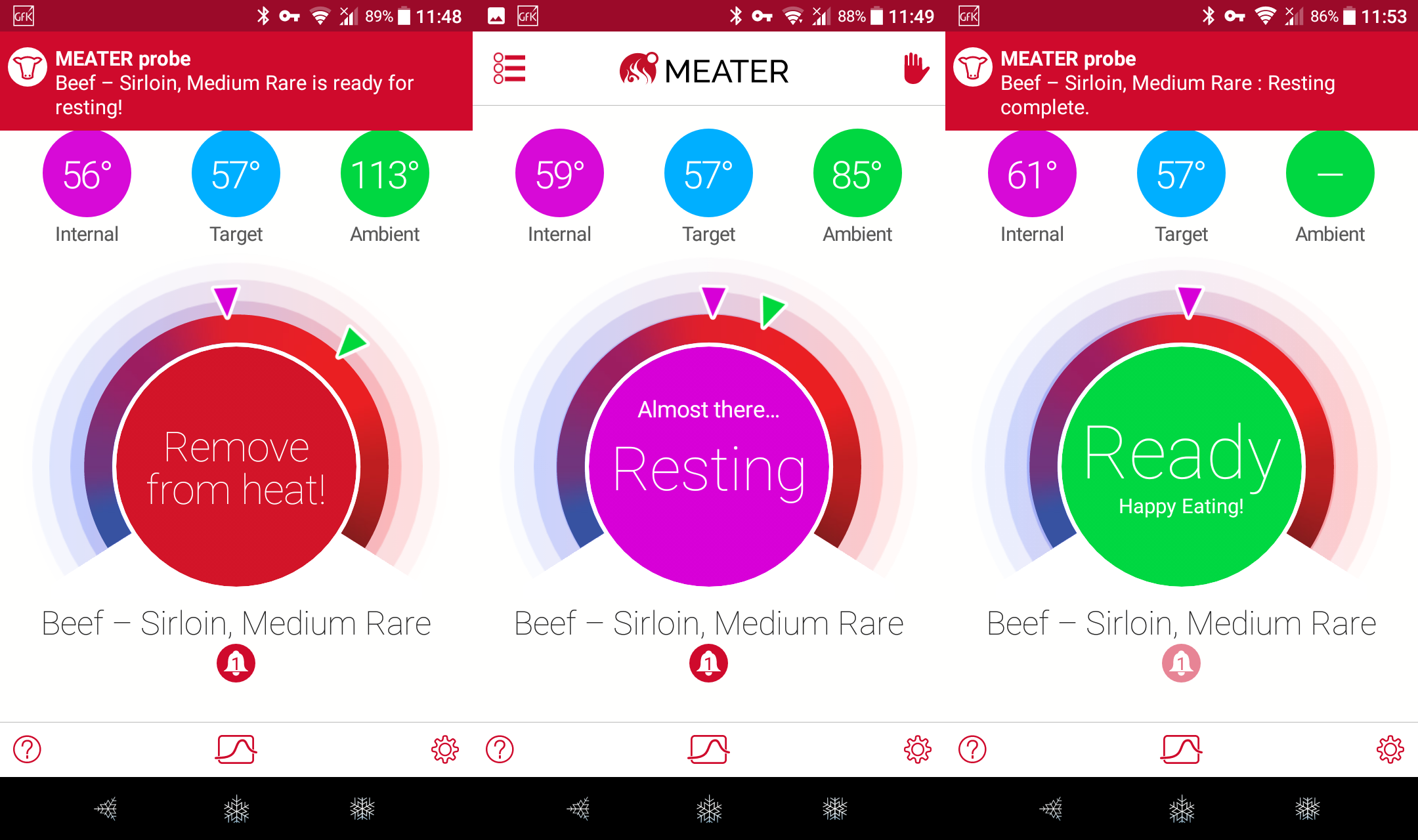 After searing, I transferred the pan to the oven. There was no guide on the temperature the oven should be set to, so I chose 150ºC. After five minutes, the app advised that I remove the meat to let it rest, which I did for a few minutes.

Following the instructions resulted in a perfectly cooked medium-rare steak – pink in the middle, tender and juicy. Clean-up was simple: simply allow the Meater Probe to cool before hand-washing. 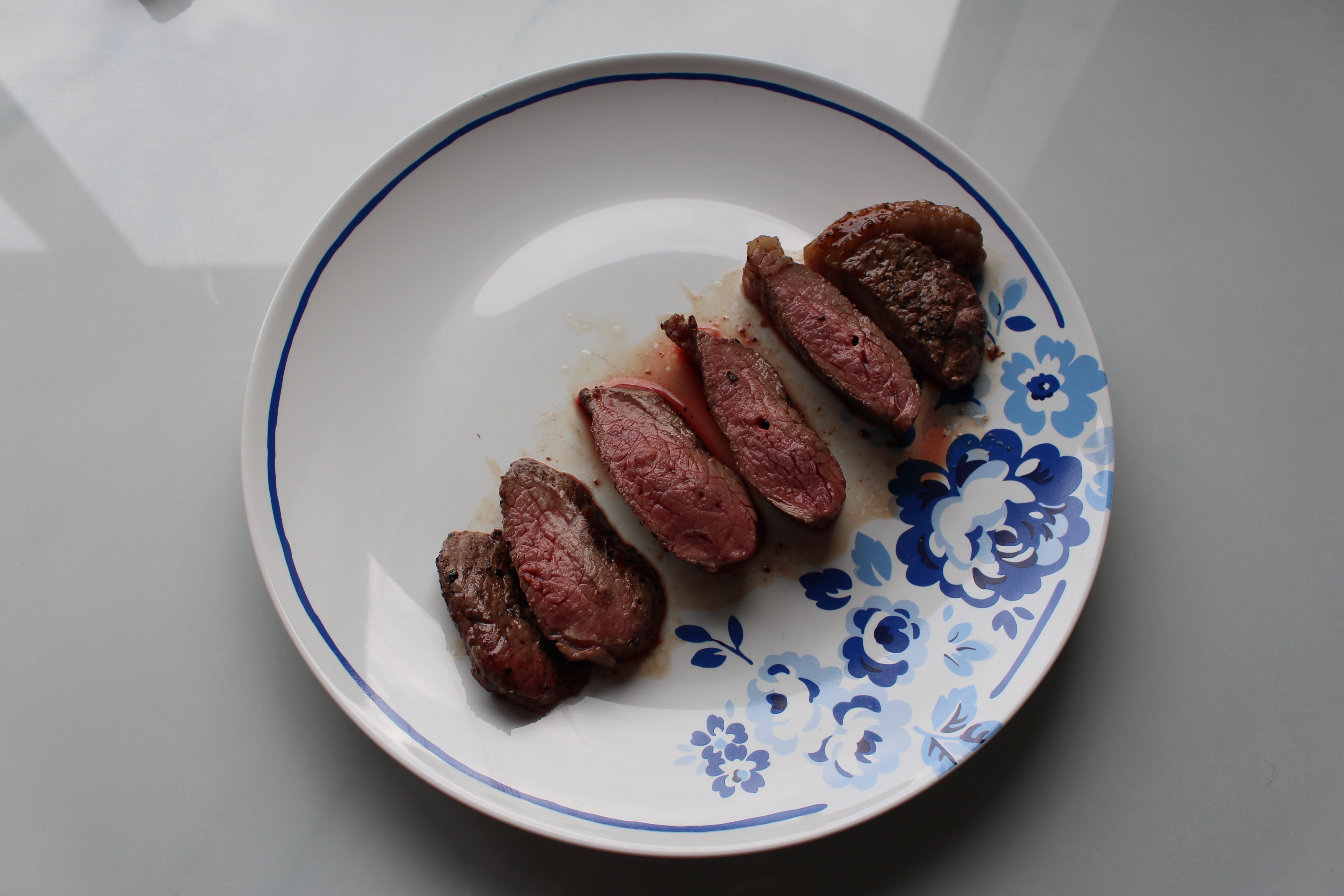 Considering you can pick up a basic meat probe for less than a tenner, the Meater has a long way to go to justify its price. Fortunately, it does this with aplomb, marrying style with functionality while maintaining a compact size.

Rather than being ‘connected’ just for the sake of it, the app has real value adding features and videos. As covetable for experienced cooks as roasting newbies, this is one tool every meat-lover should have in their arsenal.

No guesswork, no burning, no effort and no wires – the Meater Probe is a no-brainer.