The MeacoHeat Motion Eye 1.8kW Heater is one of the smallest such units we've tested. Its 1.8kW output won't warm up a big room, but it's light and feels rugged, making it a decent option for small rooms. Well protected with two safety systems, and backed up by a handy two-year warranty, it's a good occasional heater.

What is the MeacoHeat Motion Eye 1.8kW?

We’ve been impressed with the cooling performance and near-silence of Meaco fans such as the MeacoFan 650 Air Circulator, so we were keen to see if the company could heat things up, too. This tiny 1.8kW fan heater has a couple of advanced features, including a timer and motion detection.

It also has good safety features including a tip-over switch and overheat protection, but misses out on thermostatic control and a remote. It’s a good performer for its size, but don’t expect it to thoroughly heat a large room.

MeacoHeat Motion Eye 1.8kW Heater – What you need to know

The MeacoHeat Motion Eye 1.8kW Heater is one of the smallest heaters you’re likely to see. About the size of a loaf of bread, it’s light yet feels rugged, making it suitable for student rooms, boats, caravans or small-ish rooms in the home. It’s available in white, black and red. 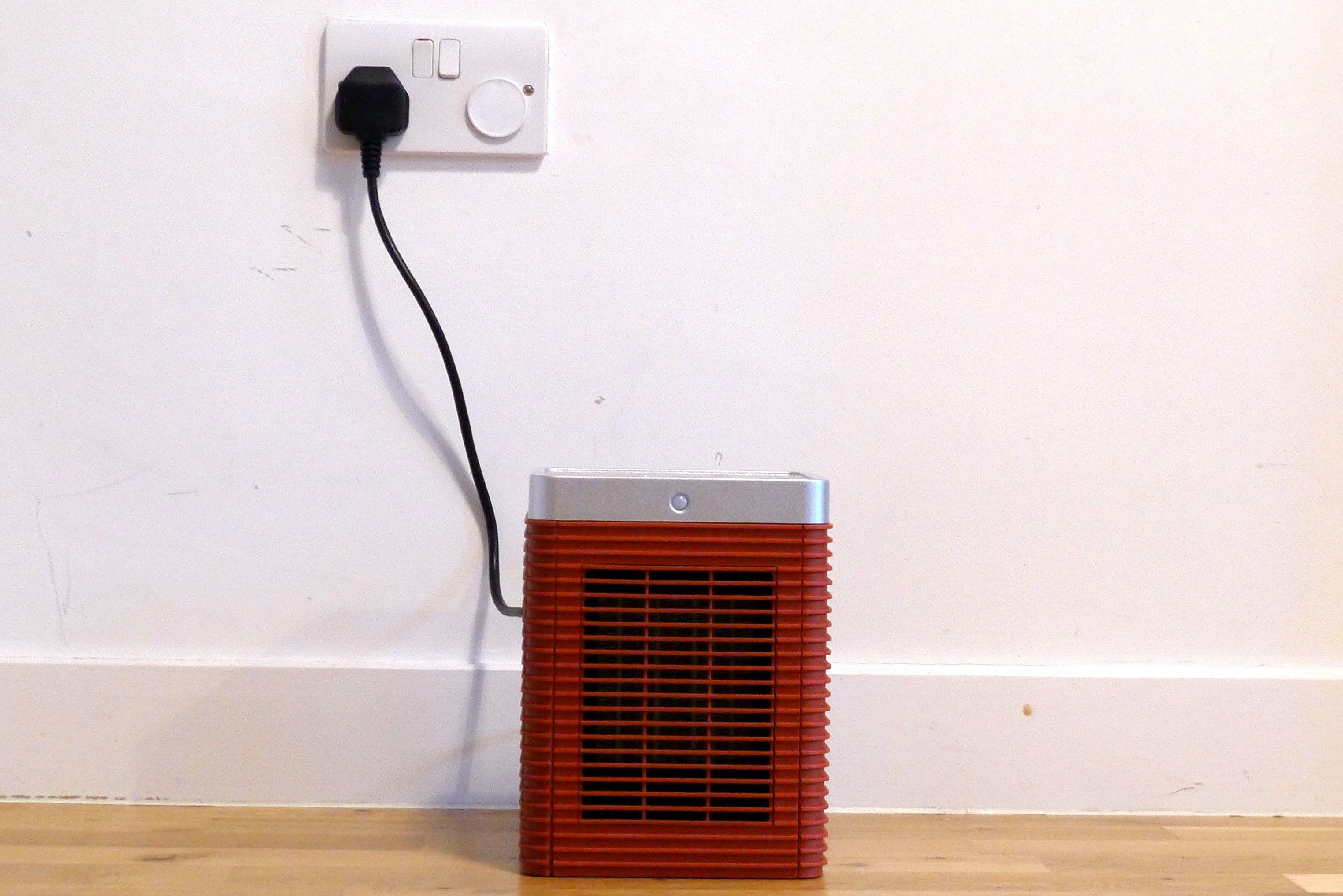 Small and neat, this is a great-looking heater

This heater’s top panel is home to a set of touch controls for its various features. There’s a fan-only mode and two levels of heat, plus a countdown timer for up to seven hours of use. While it’s a shame there’s no thermostat, there’s an unusual motion-sensing feature that keeps the heater off until it detects movement. This could be useful if you want to avoid heating a rarely used space.

On the rear there’s a physical power switch, and a detachable grille and air filter held in place by a screw. The heater has no memory of what it was doing before being unplugged, always returning to standby mode. As such, it isn’t suitable for use with a smart switch or socket timer. 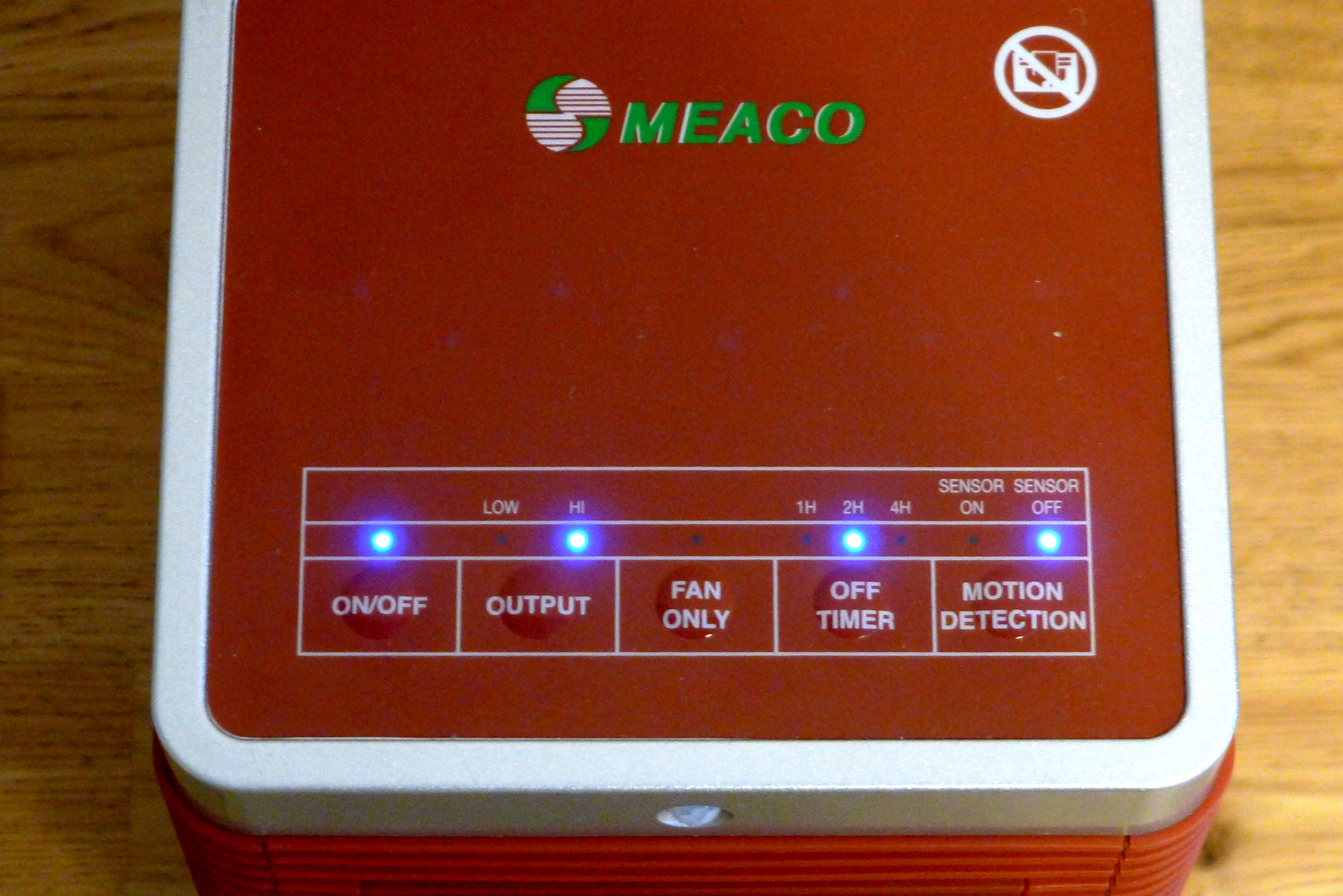 This heater pairs a modest fan with a positive temperature coefficient (PTC) ceramic element. Unlike steel elements, which run red-hot, PTC elements are designed to self-limit at a lower temperature. This should, in theory, make them safer. Another advantage is that PTC elements are very quick to get to their working temperature, so there’s little lag between turning on and feeling the heat.

With this characteristic in mind, this heater’s motion control feature makes a great deal of sense. On the front panel, there’s a passive infrared (PIR) sensor of the type you’d find on a burglar alarm. In motion-sensing mode, the heater sits in standby until springing quickly to life when it detects movement.

Unfortunately, we found that the heater was quick to cut out and reluctant to come back on in an office setting. Meaco says that the motion detection works over a 1m distance, but sitting that close would result in singed eyebrows.

You can use the heater’s timer feature on its own, or in combination with Motion Eye, dialling up a delay of up to seven hours. Unfortunately, with no thermostat, we wouldn’t recommend leaving it on overnight for fear of waking up to a baking-hot room.

Normally, we’d be wary of leaving a small and easily knocked heater on at all, but this one has both a tip-switch and thermal cutout, making accidents less likely.

With a diminutive size and comparatively low 1.8kW rating, we wouldn’t expect this heater to get big rooms good and toasty. That said, it proved quite effective in our full power test. Over 30 minutes it raised the temperature of a 48 cubic-metre bedroom from 20.4℃ to 21.8℃, consuming 0.85kW hours of electricity in the process. 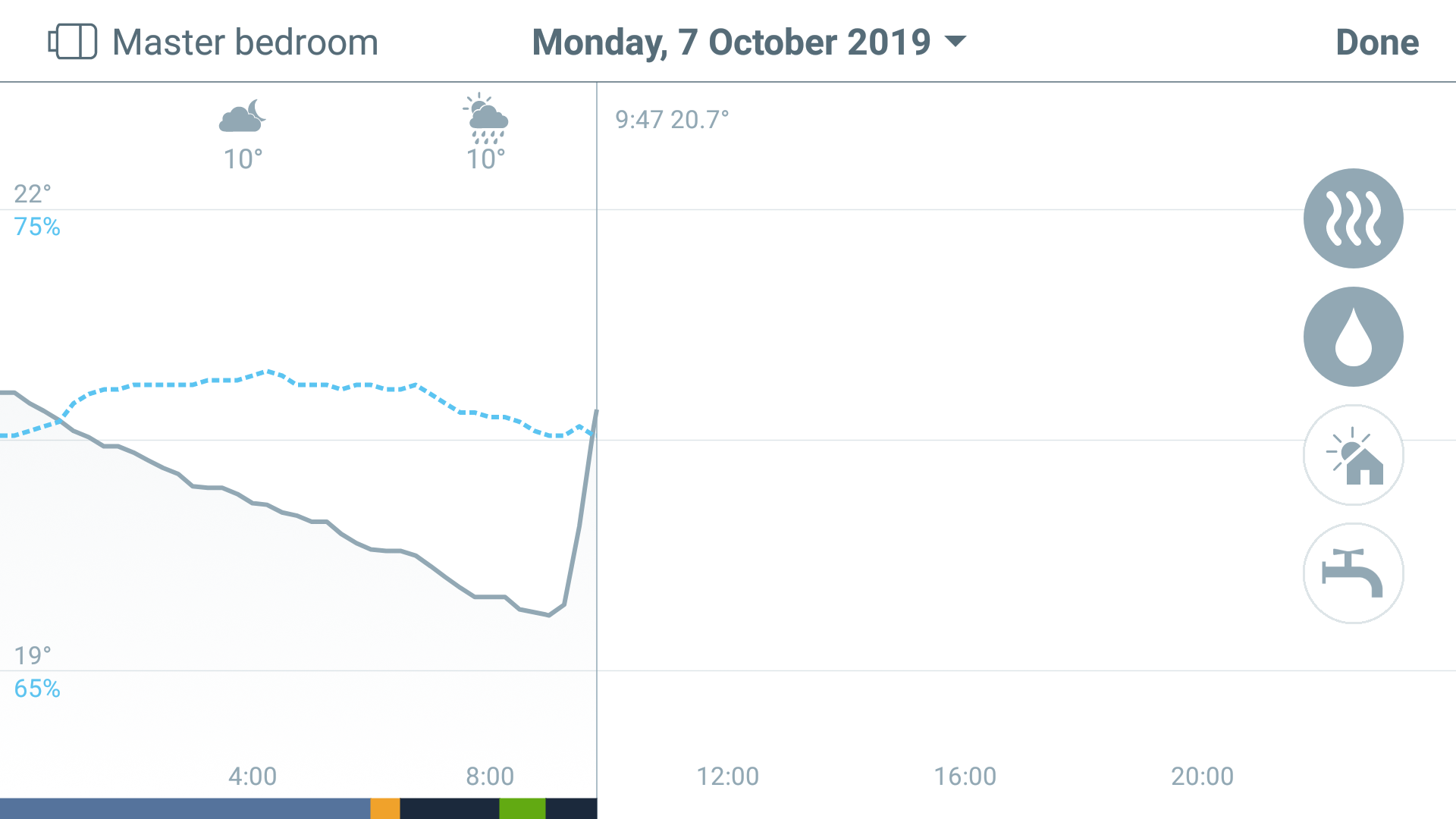 Connected to our socket meter, the MeacoHeat Motion Eye 1.8kW Heater displayed typical behaviour for a PTC device, drawing a high power peak when first switched on, then quickly falling back to a lower steady state. On the highest setting, it peaked at almost 3kW before settling at roughly 1.75kW, while the lower setting settled at 1kW. In fan-only mode, power consumption was just 14W.

While it’s great to have a fan-only feature, don’t expect this heater to supply a powerful breeze come summertime. Measured at 15cm there was a 1.7 metres-per-second waft, but a metre away this had fallen below our anemometer’s 0.8m/s threshold. And while you’ll need to sit close to benefit in summer, we wouldn’t advise it in winter: at 15cm we measured the air output at a scalding hot 58.6℃.

Should you buy the MeacoHeat Motion Eye 1.8kW Heater

The MeacoHeat Motion Eye 1.8kW Heater manages to fit some useful features into one of the smallest heaters we’ve seen. It’s light, and feels rugged, making it a great occasional heater for small rooms, or for boats or caravans that can cope with its 3kW peak power demand.

It’s well protected with two safety systems, and backed up by a handy two-year warranty, too. Our biggest criticism is that there’s no thermostatic control – if you need the feature, then opt for the larger 2kW model that includes it.