The MeacoFan 650 Air Circulator desktop fan may be modest in size, but it's sufficiently powerful to blast out a good amount of cool air when required. Importantly, the fan does this quietly, enabling you to run it all night without disturbing your sleep. This combination of high-speed air and low-operating noise makes this a brilliant desktop fan.

Reviewing the MeacoFan 1056 Air Circulator in our Best fans roundup, we loved its powerful performance and quiet operation, but we found its size a little cumbersome for a desktop fan. Happily, the brand launches the MeacoFan 650 Air Circulator, which incorporates almost all of the 1056’s features into a more compact design that can still shift up to 650 cubic metres of air per hour.

It’s hard to find fault with the new, compact version. If you want one of the quietest and most efficient ways to get air moving, the MeacoFan 650 is one of the best models you can buy.

MeacoFan 650 Air Circulator – What you need to know

It may be small, but the MeacoFan 650 is feature-rich

The MeacoFan 650 Air Circulator is the size of a standard desktop fan. It looks far more interesting, though, sporting a deeper, enclosed profile that contributes to its remarkable air-shifting performance.

Plug it in and you’ll hear a beep before the display shows the current room temperature. Turn on the fan with the remote or via its touch-sensitive controls and it defaults to the slowest of the 12 speeds on offer, but there’s immediately a strong air current, easily felt even on the other side of a room. Increase the speed to the maximum and there’s a powerful, consistent breeze.

While the 650 does without the powered vertical oscillation of the bigger 1056, you can still pose it manually through about 45 degrees. Its horizontal oscillation covers a range of about 70 degrees, and you can control it either from the front panel or the remote, which sticks magnetically onto the grille when not in use. 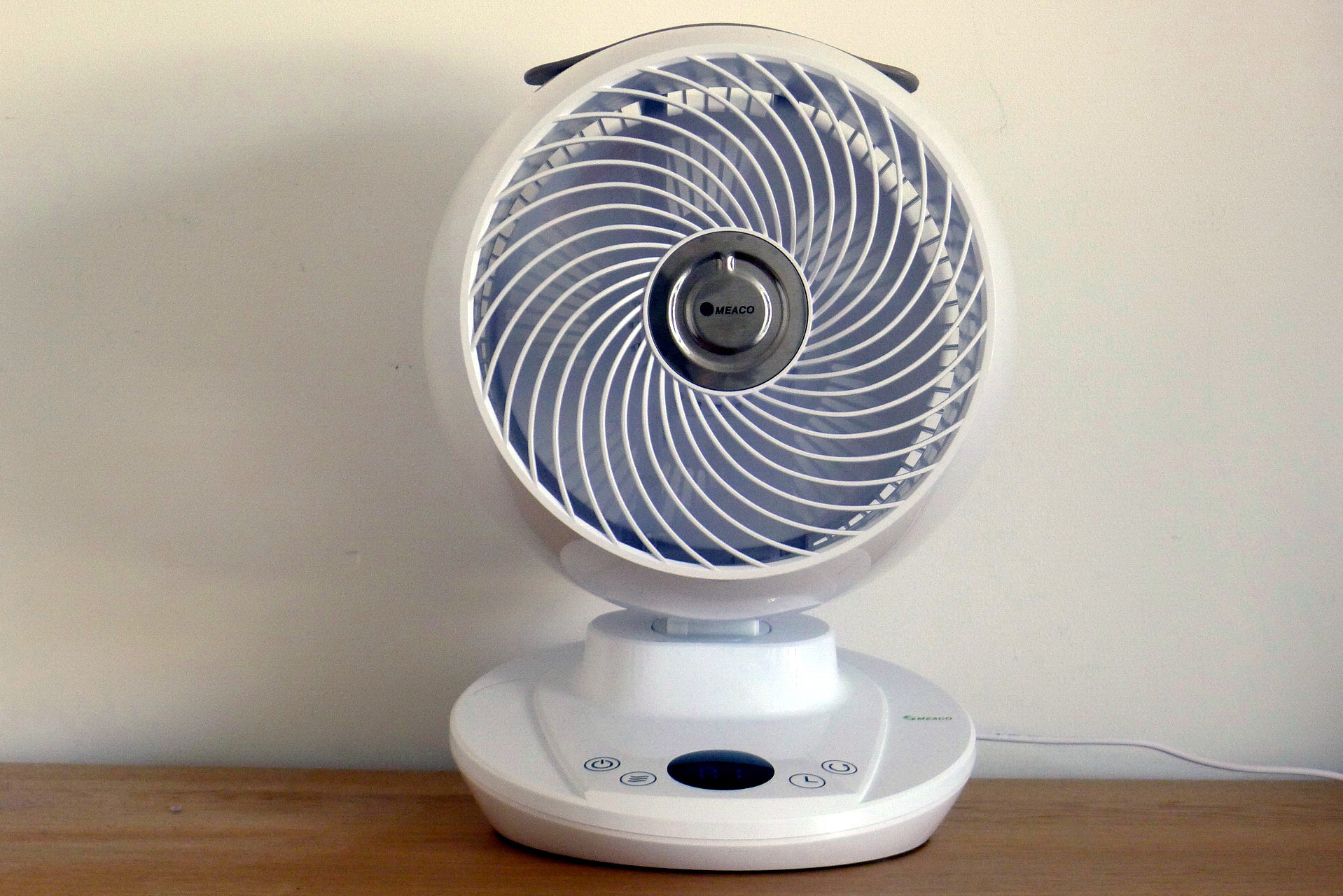 The remote control attaches magnetically to the circular cut-out at the front of the fan
The circular remote has a few controls that are missing from the fan body. There’s a useful Eco mode, which automatically increases fan speed with the room temperature. Additionally, you can turn off the fan’s display and mute its control beep. Taken together with the quiet performance, this helps make the MeacoFan 650 a great model for unobtrusive cooling overnight. 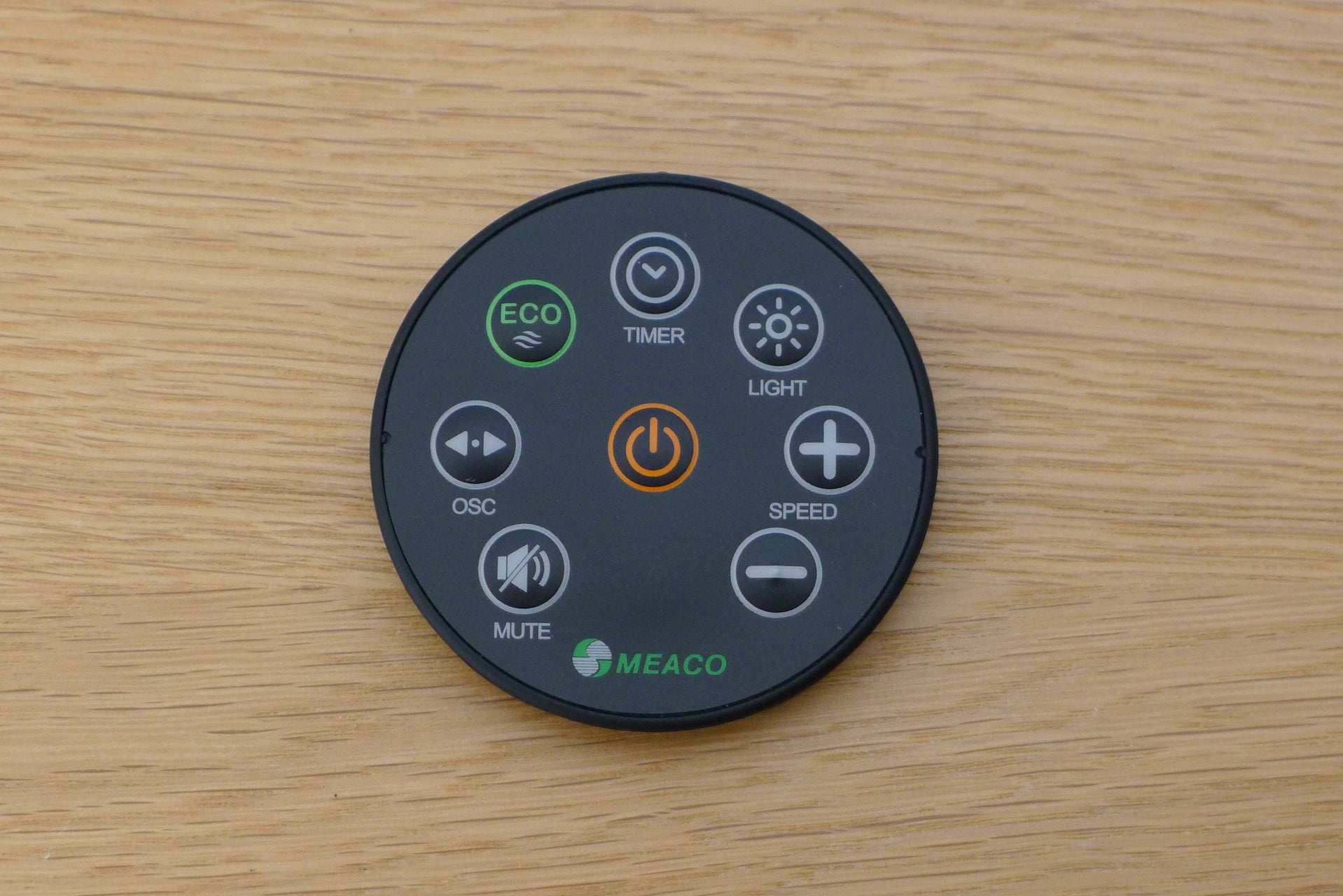 Powerful and quiet, the MeacoFan 650 Air Circulator is a fan that really measures up

The MeacoFan 650 doesn’t just give the impression of quiet, powerful cooling; our measurements back it up. From 15cm we recorded wind speed at 1.7 metres per second (m/s) at the lowest setting, and 3.6m/s at the highest.

More impressively, wind speeds weren’t that much slower when measured over distance. At one metre we recorded 1.4m/s and 2.6m/s from minimum to maximum. Even at 2 metres, we could measure 1.7m/s with the fan on maximum – that’s about what we’d expect from a big tower fan, and hints at the large volume of air being moved. 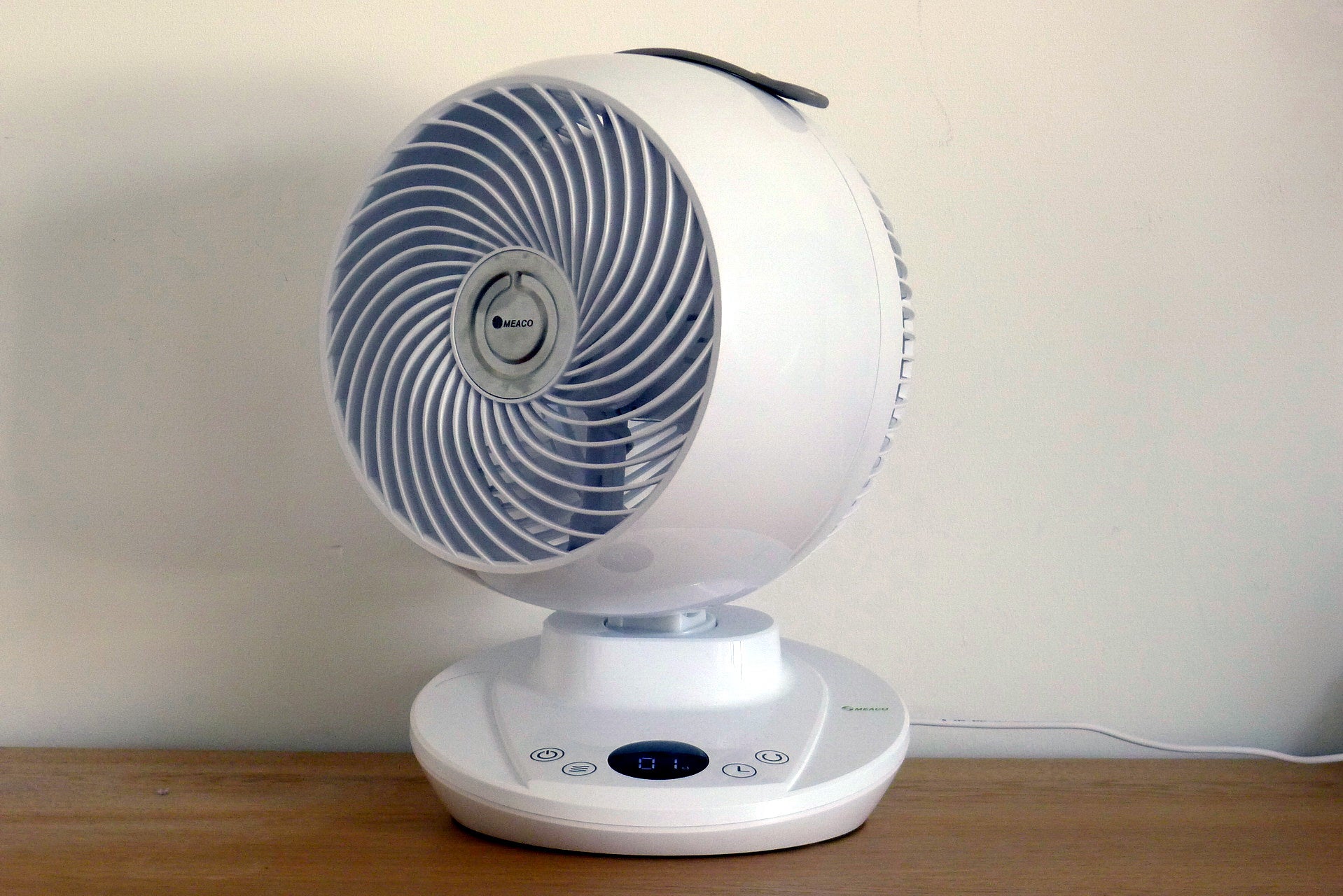 This fan is astonishingly quiet. At 1 metre we measured noise at just 43.0dB on the lowest setting and 56.1dB on maximum. Measured at a right angle, completely out of the airflow, this dropped to just 29dB and 42.7dB. These figures are well within comfortable levels.

The MeacoFan 650 has a DC motor, and seems to be remarkably efficient. We measured power consumption of just 1 watt at its slowest setting, rising to only 8 watts at the maximum – roughly the range between recharging a phone and turning on a low-energy lightbulb.

Meaco has added to this fan’s versatility by giving it a standard micro-USB connector on the rear. You could detach its cable from the supplied heavy-duty USB adapter and easily take power from a USB socket in a car, boat or caravan.

However, ideally, the power source needs to be capable of supplying at least 2.0A of current. When we tried the fan with a phone’s 1.0A adapter it reset itself, and the USB port in a 2018 VW Tiguan temporarily shut down when we tried to take the fan beyond speed 11.

Why buy the MeacoFan 650 Air Circulator?

There’s so much to recommend this fan that we’ll start with our criticisms: it’s a shame there’s no powered vertical oscillation, and that the fan’s control panel doesn’t cover all the features contained in its remote. Ideally, we’d also prefer a wider oscillation than the 70 degrees available, but this is less of an issue than it would be with a weaker fan.

Beyond that, it’s hard to find fault. The MeacoFan 650 offers a wide range of useful features in a compact and quite distinctive design. It’s very powerful for its size, and on the lowest speed it’s remarkably efficient and quiet. An integrated carry handle makes it easy to move around, and the regular USB lead means you could use it with any appropriate power source.

If you want a powerful and unobtrusive desk fan, and don’t want to spend a lot more on a product such as the Dyson Pure Cool Me, the MeacoFan 650 Air Circulator is a brilliant choice.