There’s nothing worse than playing a game with a nugget of potential that, for one reason or another, is never truly realised. By that measure, Max Ammo could easily be described as a disaster: here’s a game with not just one nugget, but an entire pack of them – scores of moments that hint at a development team that knows what it’s doing. Ultimately, however, Max Ammo lets itself down thanks to a few, seemingly minor, issues.

Let’s start with the good stuff, though. On the surface, Max Ammo is a third-person shooter, though in truth the mechanics that power it have less in common with the kind of shooter you’d play on console and PC and are more in touch with the typically tap-happy games that are the big hitters on smartphones. Playing across a series of short and sharp stages – most lasting less than thirty seconds – your job is to dash between barriers that serve as shields towards the level’s end, firing on a series of aliens popping up out of the ether as you go. 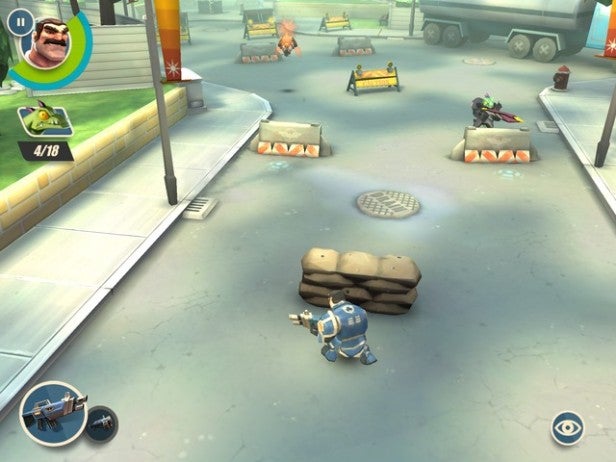 Said dashing is simply a case of swiping in the direction of your choosing (levels usually giving you a couple of different routes to head down) while using your weapon is a question of tapping on the enemy at hand in order to trigger a round of fire. Aiming never really comes into it: as long as you tap in the general area of the foe you’re targeting, your weapon will likely hit the bulls eye. Instead, success comes down to working out the general pattern of the enemy – how they move and how often they fire their weapon – and then attacking when they’re at their weakest.

All this happens in a matter of seconds, and no sooner have you taken out all the aliens on screen and moved forward to the next barrier than a few more have popped up, vying for your blood.

It’s the variety of these aliens that, at least initially, keeps Max Ammo interesting. Some big brutes target you with missiles while other smaller creatures run hastily towards your position. Knowing which of the weapons you have to hand to use at any one time is key, with opting for the wrong one usually signalling your demise. However, though developer Mantis Shrimp has seen fit to populate Max Ammo with a cast of inventive odd balls from start to finish, the levels themselves don’t proffer the same level of diversity. Most are especially narrow affairs and, though the settings themselves change and the quality of your opponents goes on the up and up, the gameplay itself remains largely identical. Needless to say, Max Ammo soon starts to feel a touch dull. 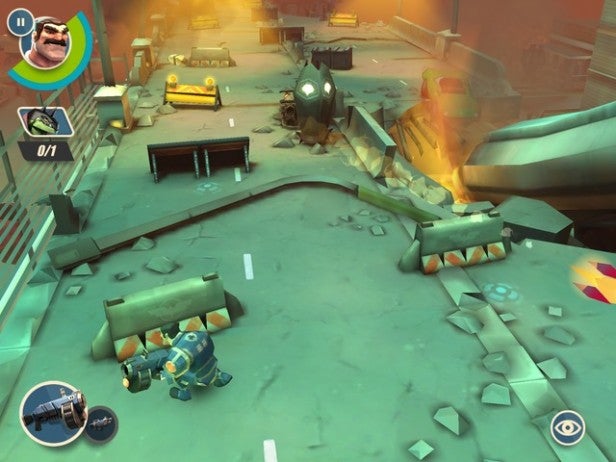 To Mantis Shrimp’s credit, there’s never any real pressure to part with your cash – the game’s energy system largely invisible for large portions of play – but the process behind upgrading your weapon, which has a clear leaning towards encouraging you to spend real money in order to make your life a little easier in battle, is ridiculously complex. There are multiple facets of your weapons and armour that can be upgraded, and then individual processes within those facets, meaning you rely on the game prompting you into spending in-game currency to equip these upgrades because, on the face of it, it’s hard to know just what part of your proposition is being improved.

It all means that vital sense of progression that free-to-play releases thrive on is lost, and when stages start to get more difficult, it becomes far easier to simply give up rather than enter the mire that is Max Ammo’s ‘Perk’ based upgrading system. Add to this the fact that success simply unlocks another, largely identical level, and much of the motivation for carrying on dissipates. What makes this all frustrating is, in every other aspect – from the chunky, cartoon style visuals to the tap and swipe control system – Max Ammo is entirely on point. The structure it sits in and the (lack of) variety of play it offers, however, simply doesn’t hit the same heights, meaning Max Ammo offers a burst of bombastic action that sadly runs out of steam as soon as the bullet casings have hit the floor.

Verdict
With crisp visuals and a well balanced control system, Max Ammo’s third-person shooter play promises much but sadly doesn’t quite deliver, with the game sadly hampered by an overly complex upgrading system and levels that all begin to fuse into one other thanks to a complete lack of variety.