I’ve taken a look at quite a few tripods and accessories recently, including several carbon fibre models such as the fantastic Gitzo Traveller 2, the highly desirable Manfrotto 190CXPRO4, and last year’s group test of a selection of leading models. They were all good quality products, but they all have one thing in common; they are very expensive, with even the cheaper examples costing over £200, and the Gitzo Traveller 2 priced at a wallet-pounding £600. There’s clearly room in the market for a good quality carbon fibre tripod at a more affordable price, and so leading manufacturer Manfrotto has launched the 732CY, part of its M-Y series, and aimed at amateur photographers using super-zoom or advanced compact cameras. 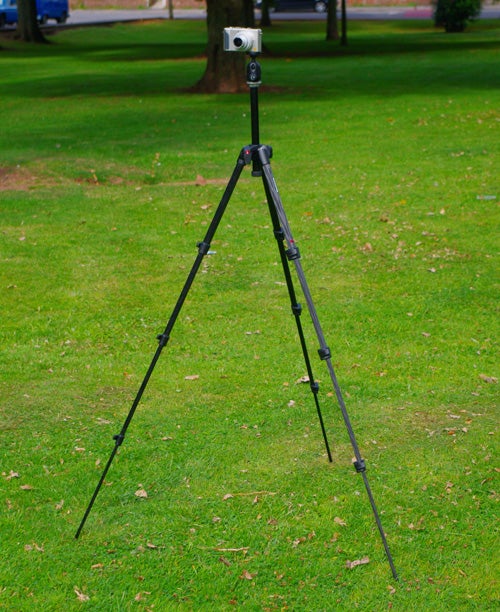 The 732CY is one of a new generation of tripods made from carbon-basalt fibre. Basalt is a common volcanic rock that has many applications in industry, where its high strength, abrasion resistance and heat resistance are useful properties. The technology to extrude and use basalt into fibres is relatively new, and basalt-fibre reinforcement is being seen as an alternative to pure carbon fibre, providing the same high strength and low weight, but at a considerably lower cost. 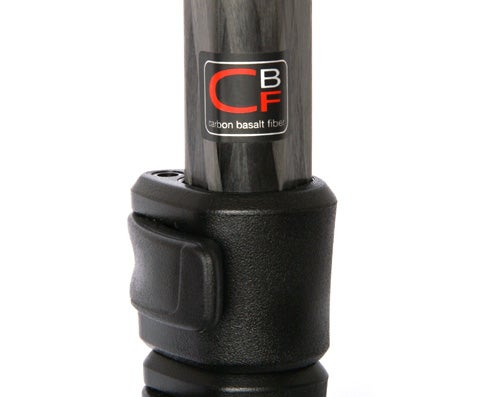 As a result the 732CY has all of the rigidity and strength of previous expensive carbon fibre tripods such as the 190CXPRO4, but is priced at around £170 from several leading retailers. It also shares Manfrotto’s well-known build quality and attention to design detail, resulting in a reliable, easy-to-use low-mass tripod at a price which is well within the reach of most hobby photographers. Combined with the versatile 494 mini ball head (around £40) it makes a compact and lightweight package ideal for smaller DSLRs, super-zoom cameras or large compacts. 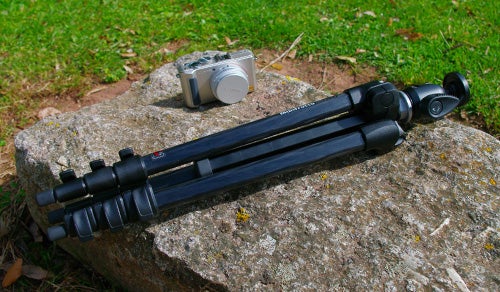 The design of the 732CY is much less bulky than the 190CXPRO4, with thinner triangular cross-section four-segment legs. The leg locks are plastic rather than the cast magnesium of the more expensive model, but are solidly made with metal pivots, and lock solidly in place. The levers are quick and easy to operate and it’s possible to set the tripod up in just a few seconds. 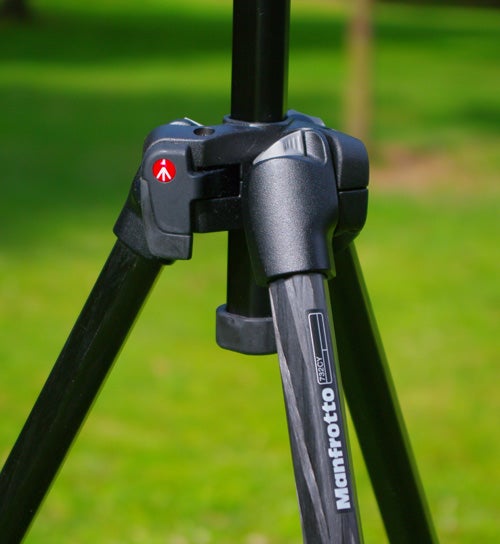 The top casting and the upper leg ends are made from alloy, with a slim single-sided pivot design that is strong but light and compact. On the top of the legs is a bevelled rotating knob which allows the legs to be opened to two different angles, although unlike the 190CXPRO4 and other larger Manfrotto tripods the legs cannot open out to 90 degrees. The feet are simple rubber caps without even a grippy texture, and unlike the more expensive models there is no option to replace them with spikes or snow feet. 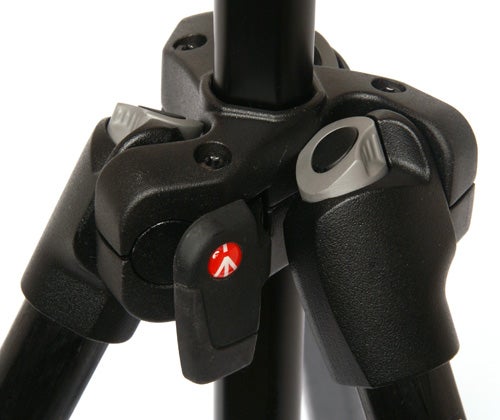 The centre column is made of aluminium rather than carbon fibre, and this too has a triangular cross section. It is held in position by the action of a lever on the side of the top casting, and moves freely when this is released, so be careful if you release it with a camera on top, because it will drop sharply. The centre column is relatively short, adding just 19cm to the extended height of the tripod. It can be removed and re-inserted upside-down if the rubber end-cap is prised off. 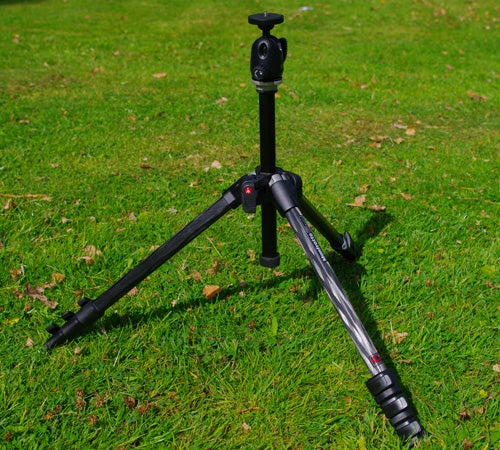 At full height the 732CY is 134.5cm tall, and folds down to a very compact 43.5cm long and less than 8cm in diameter at its thickest point. Minus the head it weighs just 950g, so even including the 220g 494 ball head this is a very slim and light tripod for its height, making it an ideal choice for travel and backpacking. It can support 3.5kg, while the 494 head is rated for 4kg, so it is capable of handling all but the biggest cameras.

The 494 Mini Ball Head is another recent addition to the Manfrotto range. It is a simple but effective design, sharing some features with the larger and much more expensive 468MG. It has a quick-action locking lever on one side, and a separate adjustable friction control on the other side. The ball can be tilted up to 90 degrees in two directions, and of course the whole head can be freely rotated. 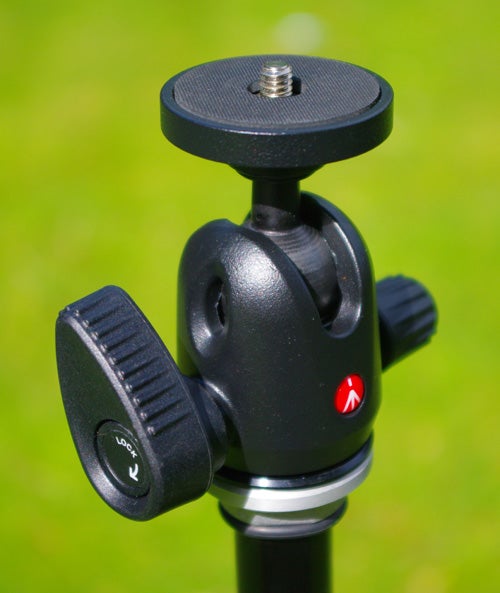 The body shell, ball and other components are made from aluminium, which isn’t as strong as the magnesium alloy of the more expensive professional heads, but the castings are strong and chunky and the shape provides plenty of protection for the surface of the ball. It moves smoothly, and the adjustable friction control is fine enough to allow smooth panning while still supporting the weight of the camera, useful for tracking moving subjects.


The camera mounting plate is a simple disk with a standard tripod bush thread and a thick textured rubber surface providing a secure grip onto the camera, and is attached by loosening the lock and rotating the plate. The 494 is also available with Manfrotto’s popular RC2 quick-release camera mounting plate. 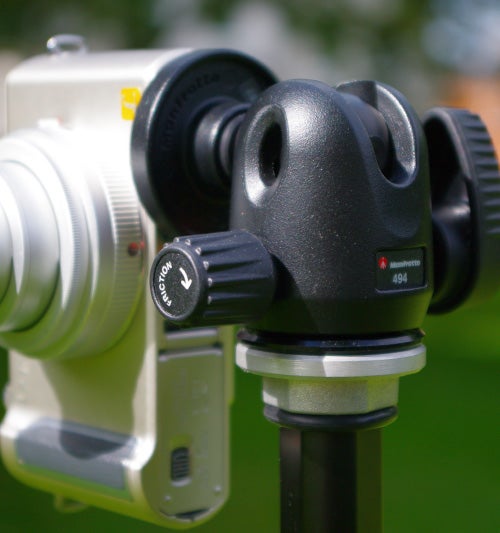 For a combined price of around £210 the 732CY and 494 ball head make a very affordable package, a lightweight, compact and very slim tripod that nonetheless provides a very strong and rigid platform capable of supporting most modern digital cameras. It lacks some of the versatility of more expensive models, but it has the same outstanding build quality and should provide years of trouble-free service. It is ideal for travel or just for days out with your camera.

The Manfrotto 732CY is a well designed and very well made tripod, using the latest composite material to offer a great combination of strength and rigidity with low weight and compact folded size. Combined with the 494 ball head it is possibly the best entry-level CF tripod on the market.