The single most useful accessory for any type of camera is a good sturdy tripod. Setting your camera up on a tripod opens up a whole world of photography that would be impossible without one. With a tripod you can take low-light photos at any shutter speed without having to worry about camera shake, you can perfectly compose group photos when you also want to be in the shot as well, and more importantly you can take your time over a photo and get it exactly right. 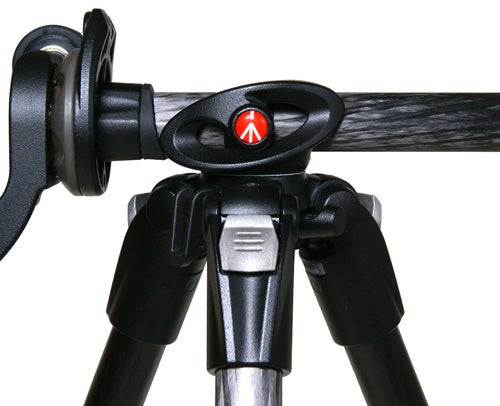 However tripods are usually heavy and bulky pieces of equipment, and awkward to carry around especially if you’re travelling light. There are some lightweight travel tripods that are easy enough to carry, but there tends to be an inverse relationship between rigidity and weight, and many of them are too flimsy to provide much worthwhile support, especially for larger DSLR systems.


As with many modern applications where low weight needs to co-exist with high strength, the solution is carbon fibre. Carbon fibre tripods aren’t new, but until recently they have been comparatively expensive. Prices for this advanced composite material are falling all the time though, and it’s now possible to find some outstanding bargains, such as today’s review item, the superb Manfrotto 190CXPRO4, which is available for under £200. 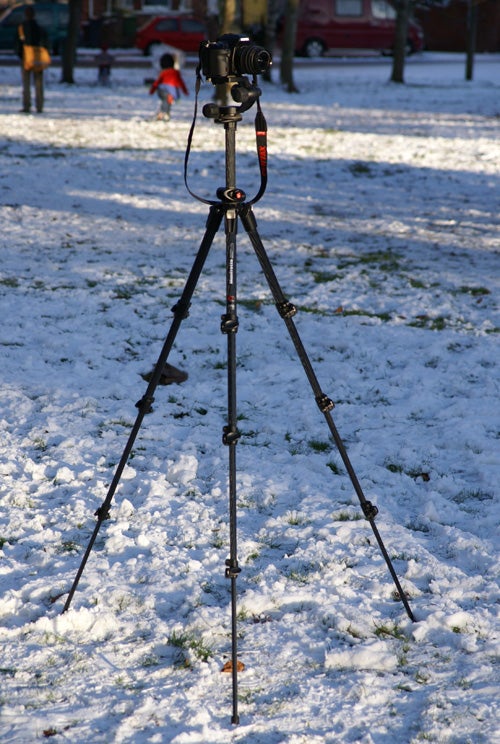 The 190CXPRO4 is a lightweight four-section carbon fibre tripod designed for travel and portability. It weighs just 1.34Kg (minus the head), but can support a weight of 5Kg, more than enough for a full-size DSLR and telephoto lens. Fully extended it has a height of 1.46m, but packs down to a compact 50cm long. There is also a three-section version (the 190CXPRO3) which is marginally lighter at 1.29Kg but folds down to 58cm.

There are several advantages to carbon fibre as a material for tripods. Obviously it is lighter than aluminium for the equivalent strength, but it it is also more rigid and damps vibrations more quickly and effectively. It is also a lot more comfortable to handle in very cold weather, something which has certainly been an important consideration over the past few weeks here in Britain. In sub-zero temperatures it’s possible for your skin quickly to freeze and stick to exposed metal objects, which can be quite painful to un-stick. Carbon fibre doesn’t transmit heat as well as aluminium, so this doesn’t happen. 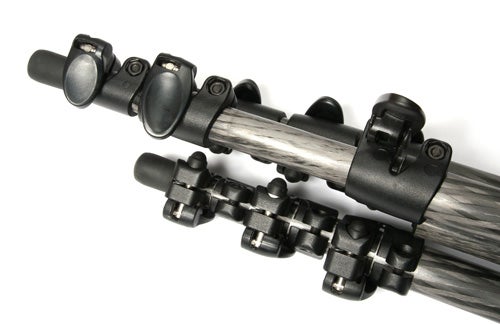 Italian-made Manfrotto tripods are very popular with professional photographers, and are well known for their excellent build quality and durability. The 190CXPRO4 is extremely solidly made, with chunky magnesium castings at the headstock and pivots and tough metal clasps at the section joints. The clasps have strong ABS plastic levers that are shaped for easy use but secure fastening, and the tripod comes with a small spanner that can be used to tighten the clasps if they become loose over time. 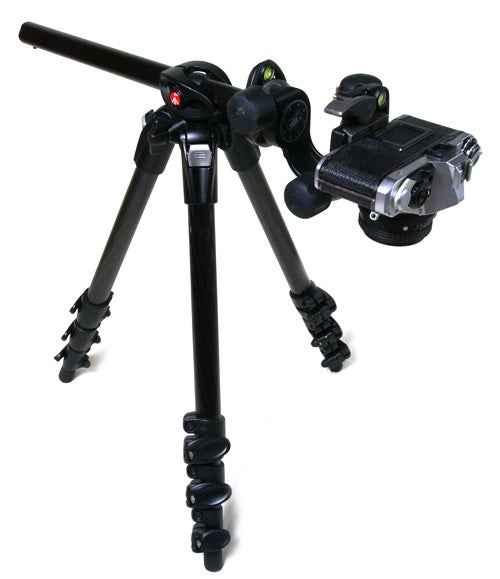 The legs can be positioned at four different angles from vertical to horizontal by pressing a ratchet release at the pivot, allowing the tripod to be positioned at virtually any angle. The headstock also incorporates Manfrotto’s unique Q90 centre columns system, which is now fitted as standard across the 190 and 055 ranges. This allows the centre column to be quickly positioned either vertically or horizontally by loosening the column clamp and pressing a button inset into the bottom of the column. The column can then be lifted partially free of the headstock and easily re-inserted horizontally.

While the 190CXPRO4 itself is certainly good value for money, it manages to achieve this to some extent by missing out the kind of extras that most other manufacturers include as standard. Most tripods in this kind of price range come with a basic carrying bag, but with Manfrotto this is an optional extra costing another £25. Likewise optional spiked feet are available for an extra £17, but only the standard rubber feet are included. It doesn’t even include a shoulder strap, a curious omission for a tripod sold on its portability. Again this is an optional extra costing a further £20. 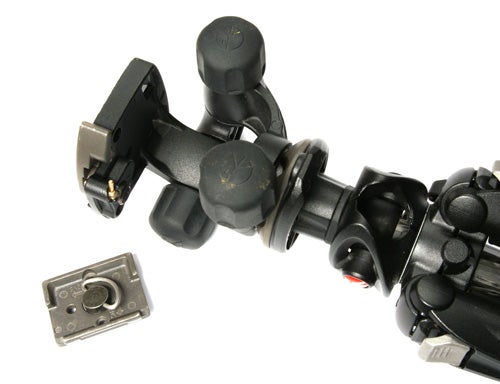 The price of the 190CXPRO4 also doesn’t include a camera head, although with professional tripods this is standard practice. I tried it out with several different heads (I own a couple of Manfrotto tripods myself), but by far the best match is the lightweight 460MG three-way head, which costs £57. It is made of cast magnesium alloy and offers an excellent combination of strength, versatility and low weight. It adds 10.5cm to the height and 430g to the weight of the tripod, and is rated to support at least 3Kg, more than sufficient for most DSLR systems. It’s an ideal head for travel use, since its compact design takes up a lot less room that the usual bundle of awkward levers found on most other tripods. It uses Manfrotto’s well-proven 200PL-14 quick-release plate system. 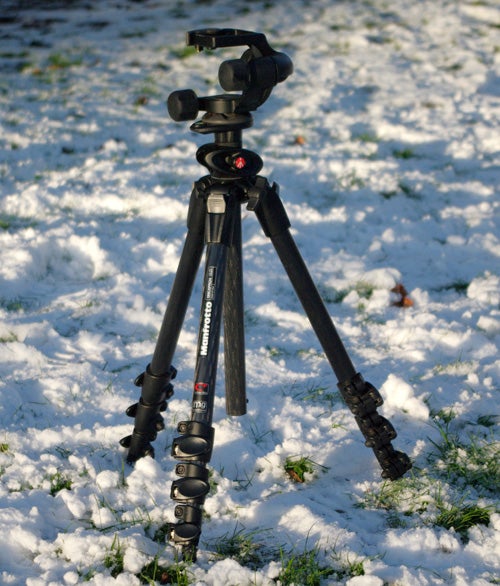 The main reason for buying a Manfrotto tripod however is its near-legendary build quality. I’ve been using this particular tripod throughout the winter so far, chucking it in the back of the car strapped to the side of a rucksack, taking it on hikes across Dartmoor, using it in the recent snow and generally giving it a hard time, but the thing still looks brand new, without even a scratch on the powder-coated paintwork. Manfrotto tripods come with a three-year warranty, but I’d be surprised if you ever need it. If you want a tripod that will not let you down, this is definitely the one to go for.

The Manfrotto 190CXPRO4 carbon fibre tripod is pretty much the perfect combination of portability, strength and value for money, and provides a professional-quality option for keen photographers who like to travel light. The build quality is simply awesome, and the clever Q90 centre column system adds some very useful extra versatility. It’s a pity it doesn’t come with at least a shoulder strap though.