What is the Magimix Le Duo Plus XL juicer?

Following a surge in the number of slow juicers available, you’d be forgiven for thinking that centrifugal models were in decline. However, the Le Duo Plus XL from Magimix proves that when blitz and spin juicing is done well, it’s every bit as good as the slow method – and has the added bonus of less prep.

Magimix claims that the Smoothiemix attachment helps orange juice retain 66% more vitamin C than traditional juicing, plus this machine comes with a dedicated citrus press for refreshing morning OJ in super-quick time. A wide feed chute accommodates generous chunks of fruit and veg, plus the Le Duo Plus XL features a spout high enough to juice straight into a glass. 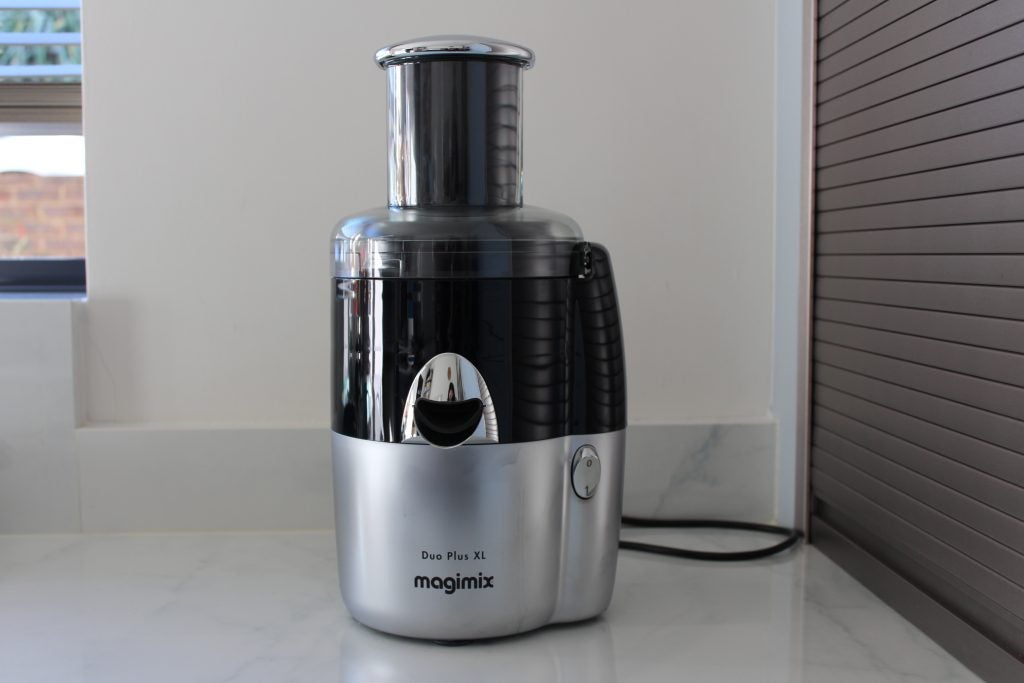 There’s something undeniably elegant about the Le Duo Plus XL, from the way it twists together smoothly to its curvy exterior and sleek on-off rocker switch. Rather than a tangle of parts, it’s a simple construction, with a juice basket slotting on top of the base with either the Smoothiemix or juice extractor filter in place (or the citrus press by itself).

However, the real magic lies in the Le Duo Plus XL’s 400W ultra-quiet commercial-grade induction motor, which is powerful enough to whizz through hard fruit in an instant. It can adjust to food type automatically, and it comes with a 30-year guarantee.

While the juice extractor is the go-to for straight, pulp-free juice, the Smoothiemix attachment is what gives the machine a versatile dimension. As well as juice with pulp and smoothies, it will turn soft fruit or cooked vegetables into coulis, purée, baby food, soups and sauces. Likewise, the press attachment isn’t only for oranges, boasting two cones for large and small citrus fruits – juicing a lime is as simple as a grapefruit. 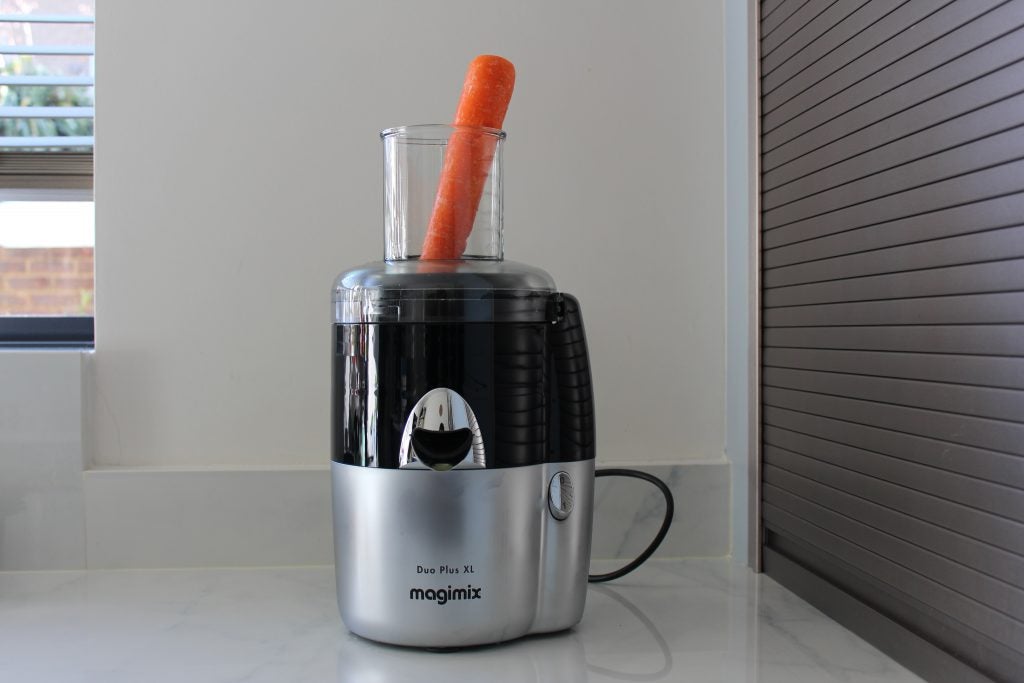 Magimix Le Duo Plus XL juicer – What’s it like to use?

One of the most noticeable things about the Le Duo Plus XL juicer is the lack of clutter, with the cable wrapping neatly around the device’s underside.

Since all the waste pulp stays inside the machine, rather than being ejected, there’s no requirement for a jug to collect it. However, there isn’t a jug included to collect the juice, so you’ll need a glass at hand or find your own jug for storage. The Le Duo Plus XL’s included recipe book is an asset, containing seasonally listed ideas for jam, lollipops, sorbet and mocktails.

I started by making juice using two apples and a handful of spinach. Although the fruit was too large to fit down the chute whole, it went in as halves easily. There was no need to core the apples, which made juicing faster; I used the pusher to ease them through the chute. There were no spurts of juice, and the flow was consistent until the machine was switched off. The juice was foamy but pulp-free, and it produced a good yield for the amount of fruit. 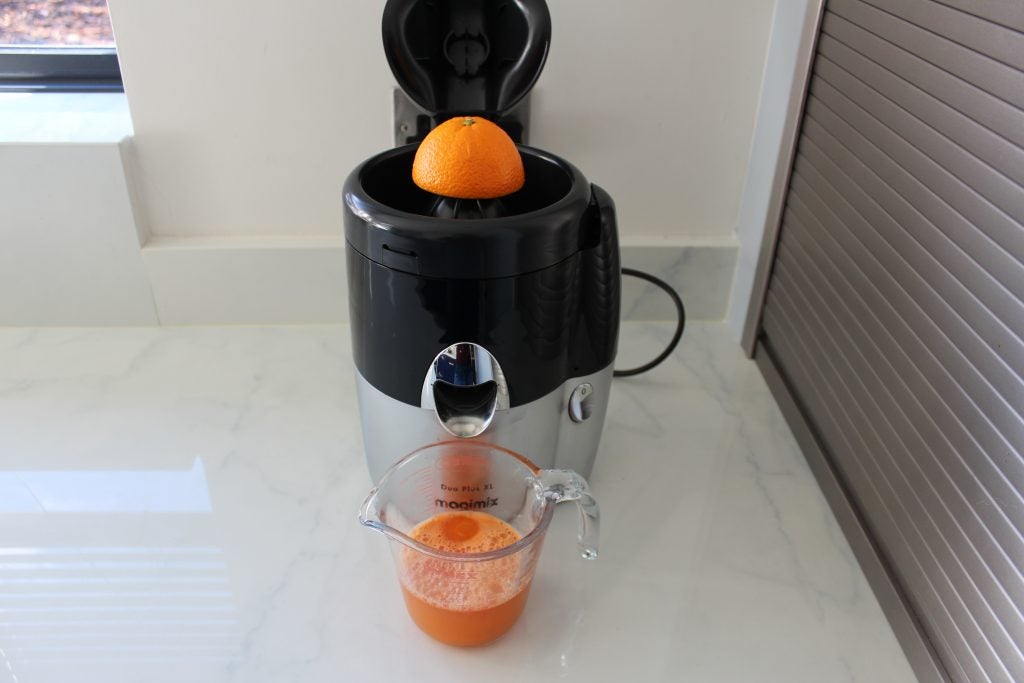 Unfortunately, the Le Duo doesn’t feature a non-drip spout, so once I’d removed the glass, it continued to drip onto the worktop. Inside, some spinach remained but the majority had been processed. The solid pulp could be easily scraped out using the spatula and rinsed to remove most of the debris.

Next, I tried a recipe for apple, carrot and orange juice. Again, prep was minimal – there was no need to peel the carrot or apple before using the juice extractor. The recipe recommended juicing two oranges with the citrus press. 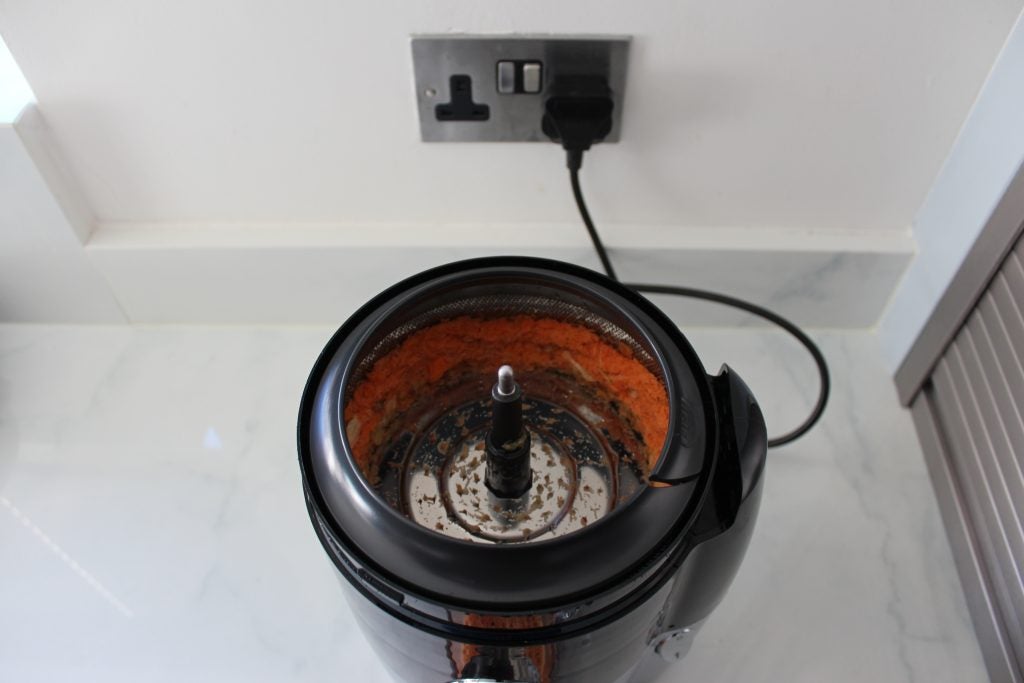 Halving the fruit, I held it in place on the large cone while running the machine. Each halve was juiced in seconds, the cone reaching all parts and leaving behind minimal flesh. A small amount of wet pulp remained, but the two oranges had produced around 300ml of juice. The recipe produced enough juice for two glasses – so again, a jug would have been useful.

I finished by making the Digestion Booster recipe using the Smoothiemix attachment for a thicker result. This recommended adding food in a specific order, starting with fresh mint, then pineapple and ginger, followed by cabbage.

The first three ingredients went through the chute easily; the cabbage was trickier – not only did it cling to the sides of the chute, it caught on the pusher and inside the bowl. As well as being difficult to process, it produced a small amount of juice – the recipe being for two glasses, but it made only one. The juice was sweet, with ginger as the dominant flavour but no trace of cabbage at all.

Clean-up was straightforward. I used the spatula to scrape away most of the pulp before rinsing the rest by hand. The rim of the juice extractor also pops off for cleaning, but a brush would be handy. 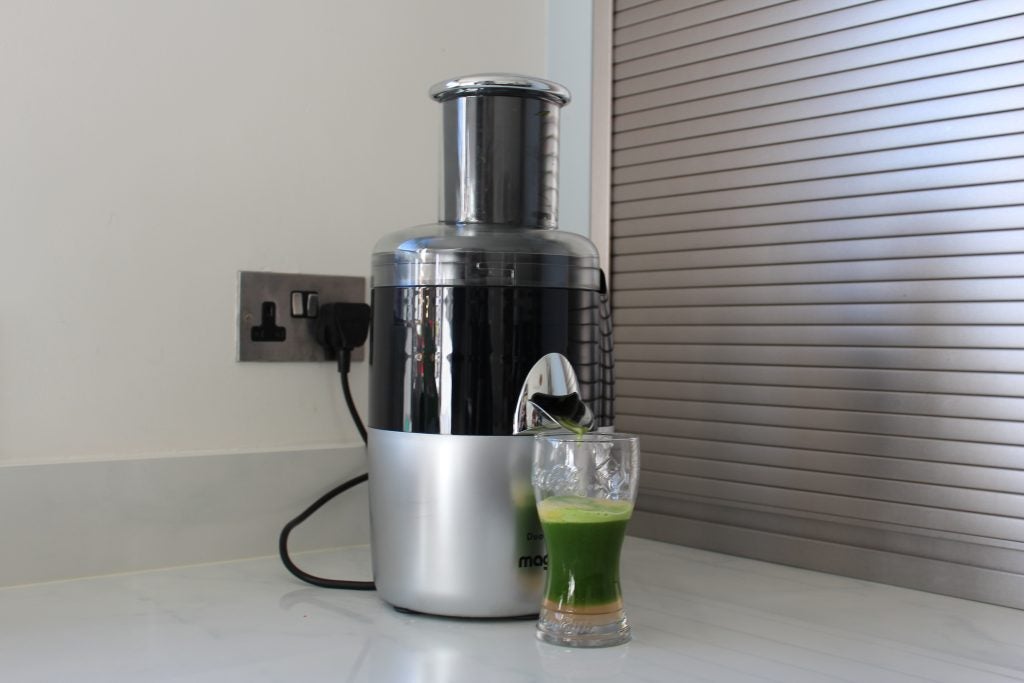 Why buy the Le Duo Plus XL juicer?

For fast juice and simple maintenance, the Le Duo Plus XL juicer is hard to beat. It delivers an impressive yield of juice from hard fruit and veg. Its range of recipe ideas and different ways of juicing makes it ideal for families, especially if you’re keen to get kids eating more healthily. A lack of blades means it’s good for getting them juicing under supervision, too.

It offers less appeal for those who want their juicer to make wheatgrass or dairy alternatives, and some more accessories and a non-drip spout would be welcome. As an all-rounder, though, the Le Duo Plus XL is a great investment.

For those who want to do less prep and drink more juice, this no-nonsense machine is the answer.