Audio and wireless are two words becoming ever more frequently associated, as can be seen with products like the recently reviewed Philips NP1100 Streamium Network Music Player. The truth is, that in this age of wireless phones, internet and console controllers, people have a perception that they no longer have to put up with tangly, trippy wires. And they’re right; even wireless electricity is edging ever closer to commercial reality. Today we’re looking at yet another product which helps you free your music to play it when and where you want; Logitech’s Z-500 wireless notebook speaker. 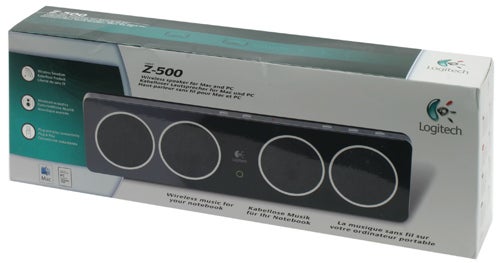 Now you might remember when Andy looked at the Logitech Pure-Fi Mobile. This is relevant because the two products could well be mistaken for identical twins. Our main complaint with the Pure-Fi was its somewhat steep price, thanks to some extra phone-related features which put it in a class of its own. So along comes the Z-500 with the phone-features stripped out and a (s)cheaper(/s) more expensive price to match. More expensive? Well yes; though both devices feature the same RRP, the Z-500 is actually more expensive in retail because it’s newer.

So should you just run out and get the Pure-Fi Mobile, with more features for less cash? Not necessarily, because while Logitech took some functionality out, they did add a bit back in. This bit is rather important for those not blessed with integrated Bluetooth, and consists of an attractive Bluetooth dongle – though unlike Logitech’s miniature RF efforts on the likes of its V550 Nano Cordless Laser Notebook Mouse, this model is full-sized. We know Bluetooth transceivers are capable of being micro-sized, so it’s a bit of a pity the company has left this one a tad on the large side.


Getting onto what you get in the box, it’s a rather nice set. There’s the speaker bar, a lengthy mini-USB to USB cable, a very short 3.5mm audio cable with gold-plated connectors, a mini-USB charging cable and a lovely zipped black ‘mesh-effect’ case. This case is large enough to hold both the speaker bar and the power adapter in separated compartments. The zip is protected by an auto-closing cloth cover, and the case is not only stylish but also well padded with a soft lining, to protect your gear from harm. 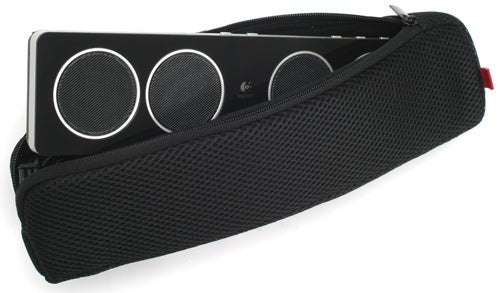 In terms of visual design, Logitech products are usually very accomplished, and the Z-500 is certainly no exception. Indeed, the device simply exudes class. As mentioned, it looks almost identical to the Pure-Fi Mobile, which means that at the front, you get a glossy piano-black surround cradling four metal speaker grills with a narrow silver trim. The only other intrusions on the shiny front are the stylish Logitech logo and a small green LED circle, indicating a Bluetooth connection (or lack thereof).


The back is textured in the same appealing soft-touch rubber as its predecessor, meaning it’s slip-proof while carrying, and you can put it down anywhere without fear of scratching either the device or the surface it’s resting on. If you want to put it down ‘standing up’, the well-implemented ‘legs’ at the back are solidly constructed of metal, have thick rubber pads, and fold away neatly when not in use. Speaking of carrying, the Z-500 is nicely portable at only 485grams and relatively svelte dimensions of 27.5 x 3 x 7cm (WxDxH), and overall build quality is ruggedly excellent.

Separating the two finishes (glossy hard black and rubbery matte black) is a silver strip that runs all the way around the device, and in which are integrated the buttons and indicators. Of course there are a few less of these this time around, since we’ve lost the mobile phone functionality. Hence you’ll find ‘power on/off’, ‘source switch’, a button to activate Stereo XL technology (supposedly to enhance and expand your sound), and volume up/down.


This is all well and good, but I do have a few niggles with the controls. The buttons are a bit small and just the slightest bit spongy, which is fine for the others, but volume could have done with being a bit better. And while we’re on the topic of volume, where is the mute button Logitech? How can you have a speaker bar with volume controls but no mute? Thankfully the green LED indicators do a far better job, with a three-stop battery/charging meter and a Bluetooth symbol which flashes red if it loses its connection.

Also, as if to make up for the lack of hardware mute, Logitech supplies some very handy auto-installing software (compatible with XP, Vista and Mac OSX), which lets you control the volume on or mute individual applications. So for example, you can have Windows notifications set to come through quietly, but deny aural messenger alerts while listening to music with VLC or Windows Media Player at full volume.


In terms of getting your music to play through the Z-500 there is plenty of choice. Obviously, it will work with any Bluetooth device, including most modern mobile phones. Alternatively, machines that will accept the included Bluetooth dongle are also invited to the wireless party. Wired connectivity, meanwhile, is taken care of through either USB or 3.5mm jack – in other words, anything with a headphone socket is game. 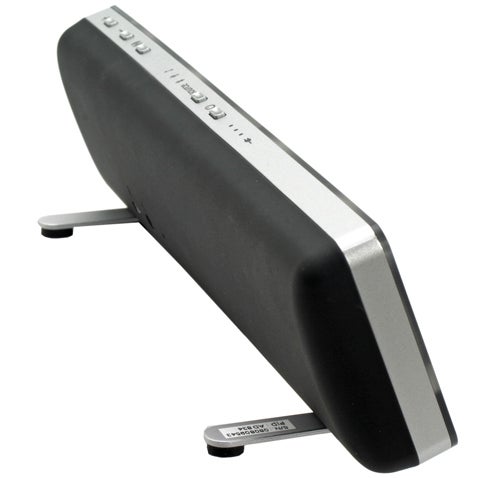 Setting up the Bluetooth connection using the pre-paired dongle under Vista is effortlessly simple: merely plug the dongle in, turn both your PC and the speaker on, and wait for the little light to stop flashing. No messing about with pass-pins or putting stuff into ‘discoverable’ or pairing mode; that’s reserved for owners of gadgets with Bluetooth already integrated.


To give you complete freedom, the Z-500’s Li-ion battery will give you a claimed maximum roaming life of 12 hours. This is in line with its sibling, and enough to run around all day – just make sure to stay within ten metres of the source. The device also goes into standby after a few minutes of inactivity.


Of course, the most important consideration with any audio product – especially a speaker bar – is its sound quality, and here the Logitech Z-500 is somewhat of a mixed bag. Just to qualify that, the sound is pretty damn good for its size; but as expected, it performs similarly to the Logitech Pure-Fi Mobile, and it shares that device’s downfalls.


Basically, Logitech hasn’t worked miracles, and a small speaker bar like this will always have some weaknesses. Audio is full-bodied, especially with the Stereo XL technology enabled – but highs can be a little tinny, and bass is somewhat lacking. However, it still beats most laptop speakers by a large margin, one of the recent exceptions being Toshiba’s Qosmio G50-115 18.4in Entertainment Notebook.

”If” you have Bluetooth integrated in your notebook or computer, you might be better off with the Logitech Pure-Fi Mobile, which offers some extra features for less money. Even Gear4 might have the answer, with its £45 BlackBox Portable Bluetooth Speaker having quite a few features – hopefully the dodgy Bluetooth audio quality will have been sorted through a firmware update. However, if you want the pre-paired dongle, the Z-500 is a solid proposition, and likely to come down in price once it becomes more widely available at retail.


Beautifully designed and constructed, with a nice feature set, the svelte Logitech Z-500 Wireless Notebook Speaker Bar is still too expensive to recommend, but keep an eye on the online stockists because if and when it comes down in price, it’s well worth a look.