Streaming. For those in the know, it’s nothing to do with gurgling brooks and forest streams, nor even with streamlining. Rather, it refers to the transfer of digital media over a network, whether that’s wired or wireless. There are many devices that do this for video, but recently, dedicated music streamers have become ever more popular.


With music systems that incorporate wireless technology usually starting in the £400 range, what if you’ve already got a perfectly decent stereo system and just lack that wireless functionality? In that case, you’d be better off looking at something like the Logitech Squeezebox Duet Network Music System. However, since this little box comes in at the £260 line, it’s not exactly the most affordable solution. Today we’re looking at the Philips NP1100 Streamium Network Music Player, a device that essentially offers largely comparable functionality, but for less than half the price. 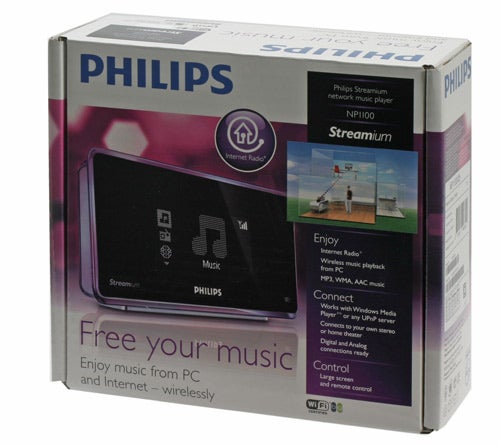 Inside the box you’ll find the player, remote, RCA and power cables, and a quick start guide plus CD-ROM. At just over 140cm, the power lead is just a tad on the short side for a device you’re meant to be able to plug in anywhere, though it does mean a minimum of cable clutter.


The front of the unit is gorgeously minimalistic. The 4in (10cm) LCD screen is framed by a very thick glossy black bezel, and this in turn is framed by a transparent plastic frame that extends around the unit’s sides. The effect is similar to the styling on many of the company’s other products, such as its Philips Cineos LCD TVs or HTS8140 Ambisound Home Cinema System, and is altogether rather attractive.


Its elegance is broken only by the ‘Philips’ logo in silver, the Streamium brand name and tiny Wi-Fi logo in white. The unit’s sides and back are also silver. At the top resides the small power button, which switches the unit between standby and on. 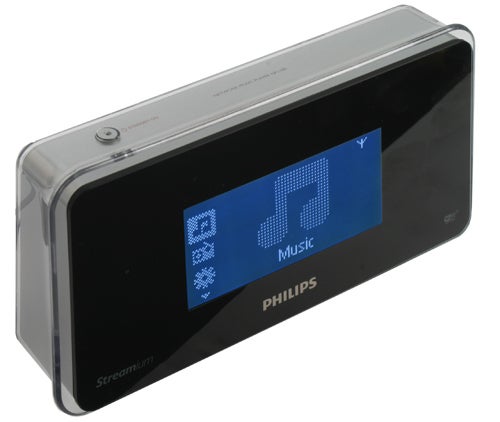 Connectivity, meanwhile, is pretty good: at the back there are stereo phono jacks, a coaxial digital out, a 3.5mm headphone jack and sockets for Ethernet and power. Of course, this being a Streamium product, you also get 802.11 b/g Wi-Fi as well.


Despite being somewhat basic – lacking features like its own display or backlit buttons – the remote is quite accomplished and a pleasure to use; which is typical for Philips, who have a lot of experience in this field. Buttons are smooth, high quality soft-touch rubberised plastic, and shaped perfectly for precise control. Layout is logical and it’s very easy to find the buttons you want without even looking. Another bonus is that the device uses AAA batteries, meaning you can use rechargeables – cheaper for you and so much better for the environment. 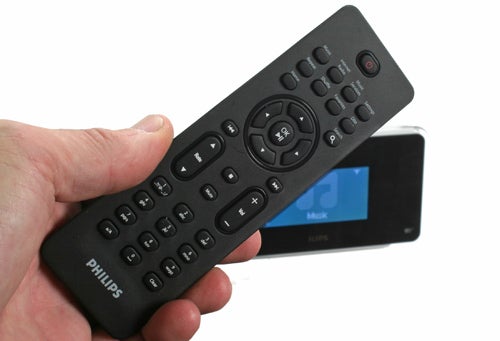 Yet, not everything is as accomplished. It would have been nice to have some minimal adjustment controls like volume on the unit itself rather than only the remote, for if you ever temporarily mislay or lose it. A bit of tilt adjustment would also have been appreciated on the NP1100 Streamium, especially considering the screen’s odd colour shift in relation to viewing angles. You see, when viewed from the front, it consists of white pixels on a blue background, but at certain angles this might change to white on purple, or even black on light blue. This is probably purposeful on Philips’ part, since it does help make the display legible from most angles, but it’s not effective 100 per cent of the time.


Getting onto how the device performs, it pretty much does what it says on the box. After a firmware update and a restart, the system plays a short intro which tells you about the NP1100’s features, after which you’ll need to enter region, date and time. Annoyingly, I needed to re-apply my wireless settings after the reset, including typing the lengthy password all over again using the mobile-phone like pad on the remote – something you won’t want to do too often!

Once everything is working and the machine has booted (which takes about 10 seconds), you’re greeted by three simple icons; namely Music, Internet Radio and Settings. There is a slightly annoying beep with every adjustment you make, but thankfully it can be turned off. The first two functions are really straightforward, with Music granting you access to your collection stored on a PC or any UPnP capable media server, and Internet Radio giving you access, surprisingly enough, radio over the Internet.


Speaking of which, if you haven’t experienced Internet Radio before, you’ll likely be stunned: literally thousands of channels are at your fingertips, from any country in the world. These are searchable by the genre of music they play, their popularity, language, region, and a myriad of other categories – and of course you can also assign favourites. 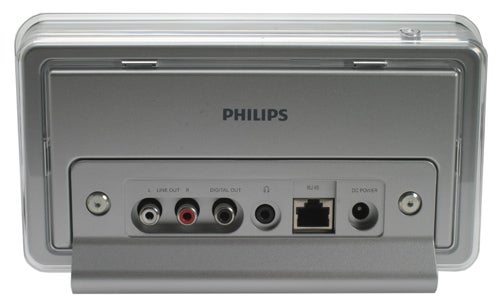 Streaming music from your PC, meanwhile, couldn’t be simpler – ”if” you’re running Microsoft’s Windows OS and Media Player 11 (included on the disc). The instructions in the provided manual are clear and concise, and all it takes is a few clicks, even with the NP1100 Streamium in standby mode. Going to Music on the menu then lets you select which machine you want to stream from, and hey presto, you’re listening to the music collection from your bedroom PC or any NAS device supporting UPnP on your sitting room’s sound system. Format support is decent with MP3, WMA and AAC part of the party, though support for FLAC and other lossless formats would be nice.


When putting the Streamium into standby, after politely telling you “goodbye” it will turn into a clock which also displays the date. This, it must be said, is a very handy feature, though I wish Philips had provided the option to turn it completely off.

In fact, my only real complaints with the NP1100 concern the screen: though it’s large, it is also very low resolution, meaning you can only see a few of the options when going through lists. In addition, titles can rarely be displayed completely and text scrolls ”excruciatingly” slowly, so forget about quickly reading the artist’s name.


So how does Philips’ effort compare to similar devices on the market? The Logitech Squeezebox Duet Network Music System is an interesting high-end alternative. Of course, for its price of around £250 you can get two of the Philips units, but in addition to dual digital audio connections and hub functionality, the Squeezebox Duet offers a beautiful remote with its own 2.4in full colour, higher resolution LCD screen. 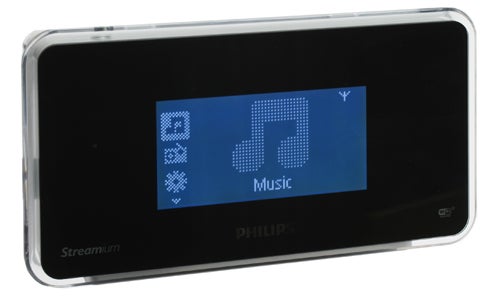 Another device you might want to take a peek at is the Creative Xmod Wireless, though this is a bit different in functionality. It uses a main transmitter/hub that you connect up to the source through USB, and this in turn streams music to the receiver after applying the X-Fi treatment. It doesn’t, however, have any of the Internet Radio capabilities of the NP1100, something that to our minds adds a lot of value. Also, there’s no network or digital sound connectivity and most importantly, the lack of a screen means track selection is blind. Still, at around £60 it’s half the price of the Philips.


The Philips NP1100 Streamium Network Music Player gives you the ability to stream your music collection from any networked source to any sound system or pair of headphones, and to listen to Internet Radio without turning on a PC. With attractive looks, good connectivity and simple usage, only a few niggles keep it from a recommended award.