Logitech just recently unveiled a shedload of new Ultimate Ears-branded gadgets. Headphones, speakers, and the Logitech UE Smart Radio are all out on shelves now. However, this radio in particular may look terribly familiar. That’s because it’s a tweaked version of the Logitech Squeezebox Radio that has been around for three years. It’s a connected radio that give you access to a barrel-load of streaming services and thousands of internet radio stations.

But has Logitech made enough changes in the UE Smart Radio to make it seem current, now that the world is full of streaming audio gadgets?

Aside from the black fabric speaker grille, the UE Smart Radio is fully decked out in glossy black plastic. This is not a radio with even a hint of retro style, and the glossy finish will pick up scratches fairly easily if you don’t treat the radio well. However, there is a cute charm to this little box and its little rubber front buttons.

This new smart radio from Logitech features an ever-so slightly reworked interface, but it remains near-identical to what we saw in the Squeezebox Radio. You use the giant black knob primarily to fly through the menus, which are fairly quick to navigate. The display remains resolutely non-touchscreen.

For flicking through radio stations the knob works a treat. However, any more advanced use of the UE Smart Radio’s potential quickly feels clumsy with these on-body controls.

Using streaming services like Spotify, you’ll need to use a virtual keyboard to search for artists names of albums. Flicking through the alphabet letter-by-letter with the main scroll wheel is slow and laborious.

Streaming services are what the radio is all about too. You can easily access BBC radio content if you wish, but if you’re not hooked up to Spotify, Deezer or Napster as well you’re missing the point of the UE Smart Radio. The radio supports a bunch of streaming services as mini “apps” within the core Smart Radio interface, added separately once you’re up and running.

Alternatively, you can access your own music collection. Install the Logitech Media Server software and you’ll be able to circumvent the usual headaches that can result from trying to stream your media over your home wireless network. 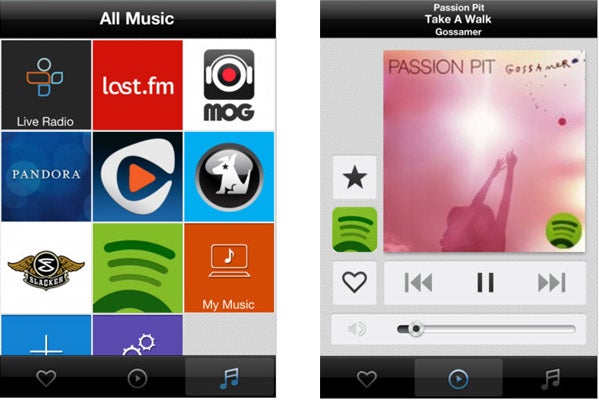 Navigating these multi-thousand or multi-million track music libraries is where the smartphone app comes in handy. As the Logitech UE Smart is designed to operate over Wi-Fi, it’s fully geared-up for control over your home wireless network, through a phone or tablet. Logitech offers control apps for iPhone and Android.

Finding tracks this way is much easier with this app than using the UE Smart Radio’s physical controls. The only niggles are that there’s often a slight delay in the smartphone command and the box’s response (especially noticeable when changing volume) and that there’s not much covering for the holes in streaming services like Spotify.

All multi-million track streaming services frequently lose rights to tracks, leaving them with “greyed” out albums or songs. In the UE Smart Radio, these becoming quite irritating as there’s no signposting before you tap on them – just the pop-up telling you they’re not available after a brief load wait.

As it’s sold as a completely new product, we’re a little disappointed not to see a bit more software optimisation in the UE Smart Radio, over what the Squeezebox Radio has. Heck, Squeezebox owners can even update their firmware to get the new tweaks.