What is the Logitech G910 Orion Spectrum?

Gaming keyboards are big business, with numerous companies trying to tempt cash out of gamers’ pockets – and that means they’re also willing to take a gamble with new features to try to make products stand out.

The Logitech G910 Orion Spectrum takes a couple of big risks. It’s only the second keyboard I’ve seen to include proper smartphone integration, and it also abandons Cherry MX hardware for another brand of mechanical switch.

Smartphone integration is a relatively new feature on keyboards – the Roccat Skeltr is the only other unit I’ve seen with similar functionality. 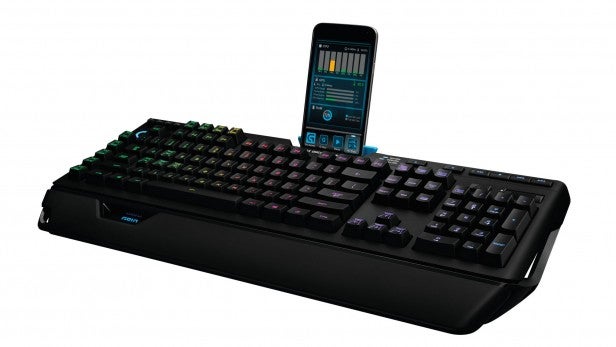 The Logitech has a small dock on its back edge that slides back to accommodate a smartphone or a small tablet, and the corresponding Arx app is available on Android and iOS.

The app links to the keyboard and its PC wirelessly, and has some familiar features: one screen has CPU, GPU and RAM speeds and temperatures; another has media controls. The G910’s nine macro buttons can be programmed with basic commands in the Arx app, and game profiles can also be chosen. If you have a Logitech mouse, that can be monitored from within the app, too.

It sounds great, but in practice it’s underwhelming. The macro programming screen is slow, with the Windows app offering a greater number of options. The media tools are slow, too – especially considering the keyboard has its own media buttons. Hardly any games officially support the app’s in-game display feature.

I’m not impressed with the dock, either. There’s no USB charging facility, so battery drain is a concern, and it’s flimsy – pressing my phone saw the handset and the dock bounce back and forwards. The dock is open on either side, so a nudge could send a smartphone tumbling. 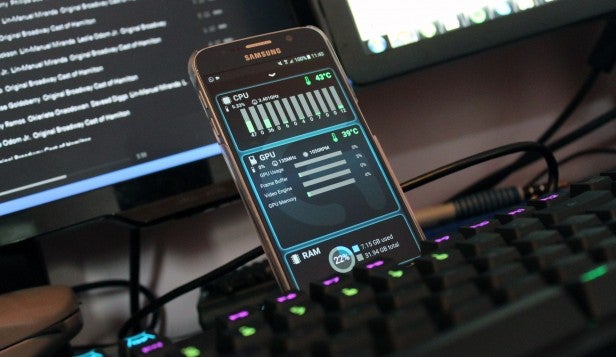 Quite honestly, it’s easily outclassed by the Roccat offering. That keyboard had a wider, sturdier dock and worked with devices being placed sideways, which means there’s less chance of your phone obstructing the view of your screen. It uses USB, so devices can stay charged, and the Skeltr features a button to switch to Bluetooth – so you can use the keyboard to reply to messages on your smartphone.

Roccat’s companion app offers similar modes to the Logitech, but it serves up a greater number of PC statistics and lighting options, battery-saving options, mistakes-per-hit monitoring and more.

The Roccat app has proven on occasion to suffer from being slow, just like the Logitech – but there’s no contest: the Roccat’s dock is better, and its companion app is more comprehensive.

Look beyond the smartphone integration and the Logitech continues to be unconventional. It doesn’t use Cherry MX mechanical switches, instead opting for Romer-G switches, which are made by Omron.

Logitech says that these buttons are lighter and easier to press than their mechanical counterparts, thanks to a modest 45g actuation force and a 1.5mm actuation distance, which is less than most other switches.

The Romer-G switches are designed to have a softer, lighter action than most, which brings them directly up against the Roccat’s rubber-dome technology. The Roccat isn’t mechanical, but its membrane design promises softer, quieter typing than mechanical units.

Elsewhere, the Logitech has some good features – but also some notable omissions. 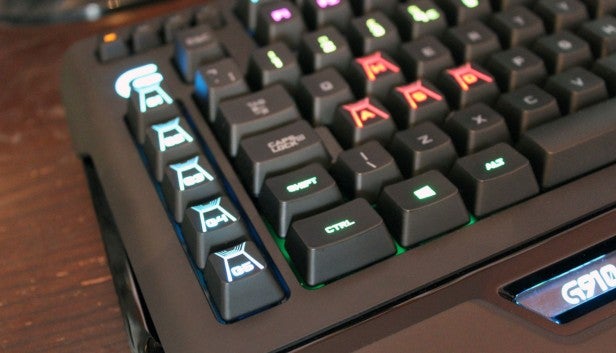 Those nine macro buttons can be switched between three different profiles with small buttons in the top-left corner, and there’s a gaming key on the right-hand side that disables the Windows button. There’s RGB lighting and 113-key anti-ghosting.

A volume roller and a full set of media keys are also included, alongside a button that disables the backlight – although I’d have preferred it if it cycled through brightness levels.

There aren’t any USB or audio connections, however, and only the macro keys are programmable – potentially an issue for gamers. The cable isn’t braided, which is unusual for a keyboard in this price bracket.

The keyboard is largely made from plastic, but build quality is excellent, and its lights, cut-away sections and wide design is more sensible than silly. The closest thing to stereotypical gaming extravagance is found in the odd, futuristic pattern on top of the key gaming buttons. This keyboard is big, too: 505mm wide and 1.5kg on the scales.

Next
Software, Performance and Verdict Review