The Logitech Gaming tool has all of the usual options in different tabs. The first allows for macro programming, with an easy interface for skipping around the keys and different modes. The tool scanned my system for installed games and loaded relevant commands – a handy touch – and macro recording was simple.

The second tab offers a similar layout for creating, saving and modifying profiles, and the third window provides lighting options. Every key can be customised, or groups of buttons can be tweaked – by default, this highlights the WASD, cursor, function, number keys and other important gaming groups. Different games can illuminate different keys, and eye-catching animated patterns are available.

The last tab is a heat-map tool that can be used to monitor key presses. It’s useful for competitive gamers, but less enthusiastic players won’t need it.

Logitech’s software is intuitive, but the Roccat Skeltr provides more audio options and tools for working with Alienware devices. It can even turn in-game events into dynamic lighting effects on the keyboard, if you’re into that sort of thing. 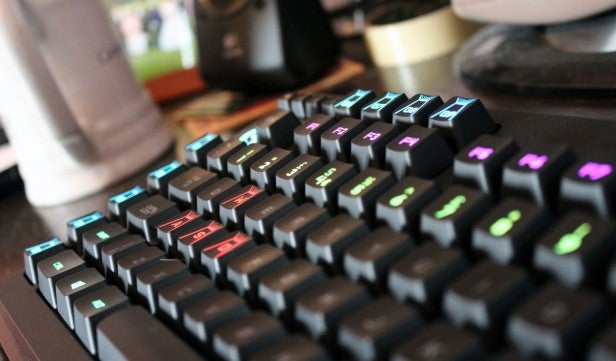 The G910’s mechanical switches are designed to offer a different kind of typing performance. True to form, the Romer-G hardware is instantly different from the usual Cherry MX Reds or Browns.

It’s smooth, with markedly less travel – and the keys hit the metal base of the keyboard with a softer click than Cherry MX-based devices. The keys are consistent and comfortable, with no difference in feel between normal buttons and the larger keys such as Space and Return.

The keys have a tiny tactile bump about 2/3 of the way down, but it’s barely noticeable – I only found it when I went looking. In the midst of an intense gaming session, it won’t be noticeable.

The sleek action, softer feel and quieter noise sees the Logitech fall between the smooth and more definite action of Cherry MX Red switches and the Roccat keyboard, which used its rubber dome design to deliver a softer feel and even less travel than the Logitech.

The Logitech feels like a half-way house between mechanical units and rubber-dome devices. Its soft, smooth action is fantastic for typing, and absolutely fine for most games – but competitive or more traditional players will prefer the more solid and snappy feel of a Cherry MX switch.

I have one small layout quibble: the macro keys. They’re divided into two banks, with five buttons on the left and four above the function row. Those latter buttons are tricky to reach, and the mode-changing buttons are even smaller and further away. 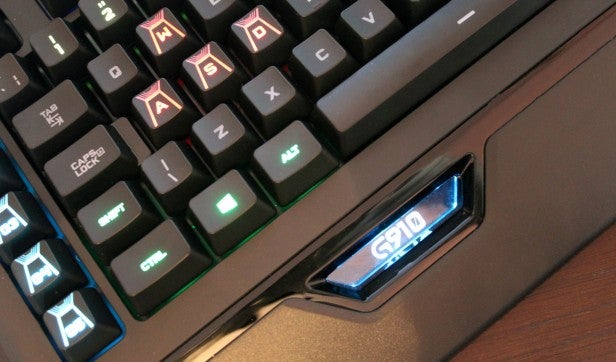 Should I Buy the Logitech G910 Orion Spectrum?

The G910 Orion is an odd and inconsistent device that ultimately falls short.

Its key feature is smartphone integration, but it’s riddled with issues. The flimsy dock lacks charging, and the app limps through with sluggish, basic features. Elsewhere, there are macro keys, media buttons and RGB backlighting, but a lack of programmable buttons or USB ports.

The absence of Cherry MX switches is notable, too. The Logitech Romer-G switches are good enough for typing and gaming, but the soft and shallow typing action just isn’t as snappy or as satisfying as Cherry MX hardware. It’s better than the spongy Roccat, but hardcore gamers will likely prefer a more traditional feel – especially for this amount of money. 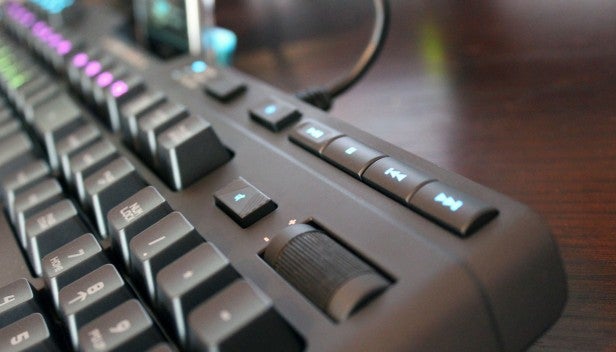 The Logitech is an awkward keyboard that’s left floundering in the middle of the market. The Roccat has it beaten for features and smartphone integration, and proper Cherry MX devices are better if a solid typing experience is your preference. The G910 offers a decent typing experience and some useful features, but it has too many downsides to earn a recommendation.

Related: The best toys for Christmas

Logitech makes bold claims about the expensive G910, but it misfires in several areas. The smartphone integration is underwhelming, and its lack of USB ports and fully programmable keys mean that this RGB-lit unit just doesn’t do enough to justify its high price.