A smart-looking headset that excels connected to a PC, with software that tidies up some of its slight mic and sound shortcomings.

The Logitech G Pro X is a mid-price wired headset that, like much of the Logitech G line, looks more reserved than a lot of gaming hardware.

This headset also has a few advanced features, but you need to use a PC to access them. It will work with Xbox One, PS4 and Switch, but only as a basic mic’d up headset. The advanced parts come with the USB soundcard. It adds 7.1 virtual surround sound and extra mic processing provided by Blue Microphones, which Logitech acquired in 2018.

Mac users don’t get these advanced features either, but you can still use the USB soundcard without the final techy sprinkles on top.

Whatever platform you use, you don’t get wireless. Fine with a cable? The Logitech G Pro X is a good choice for PC gamers, although one that does rely fairly heavily on software enhancement.

There are no bright flashes of colour with the Pro X Headset. The Logitech G logo on the cups is large but simple, and they look as much like a pair of home or studio headphones as a gaming headset.

This means fewer jibes from non-gaming friends and partners, and I don’t feel self-conscious wearing them outdoors as a pair of normal headphones. 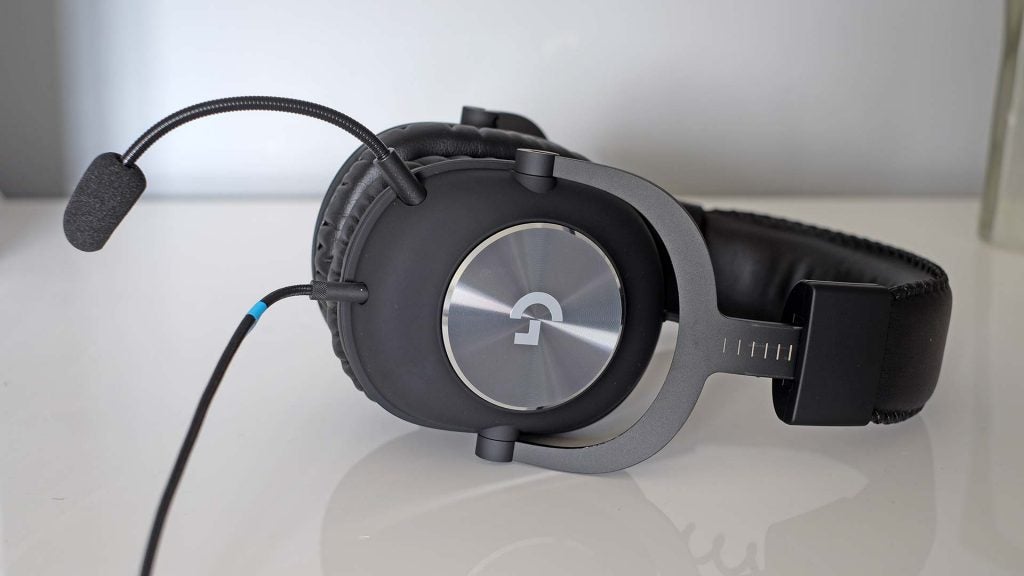 The Logitech G Pro X is not made like your average pair of wireless street headphones, though. This is a bulkier headset, with chunky cups, an XL headband and a fairly large sound port on each cup. That last feature reduces the amount of outside noise blocked out and lets more of your game, movie or music sound leak out.

There are big benefits to this approach. The Logitech G Pro X is very comfortable. At one point during testing, I used the headset for a long video-chat-based D&D session and felt no ear or head discomfort at all. The wide, well-padded headband distributes pressure beautifully, and the cup padding is thick and soft.

You have a choice of pad styles too: leatherette or fuzzy microfibre. Both feel great. Most tend to prefer microfibre for comfort, but plastic leather helps to create a better seal with your head if minimising leakage is more important. 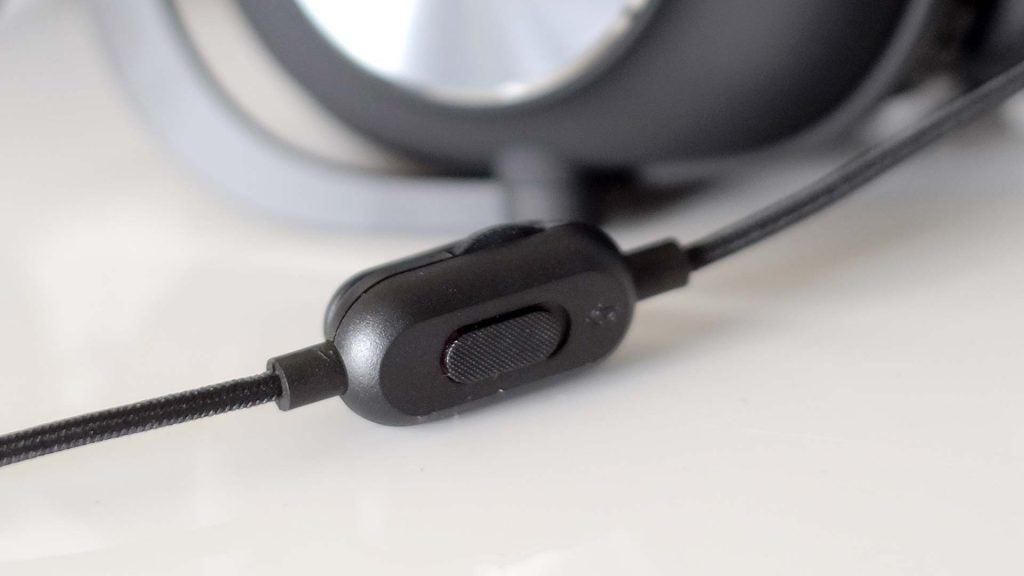 Build quality is excellent too. The neckband and the part that connects cup to headband is a single piece of thick steel, the metallic cup caps are aluminium, and the cup bodies are soft-touch plastic. Logitech uses fairly unconvincing large-print fake leather here, and the headband stitching is an obvious candidate for damage after a couple of years’ careless use. But I imagine the stitching may be purely decorative anyway.

That single piece headband rules out folding or rotating ear cups. You do get a carry case, but the Logitech G Pro X is not the obvious choice for a headset to carry around with you regularly.

The box also contains the USB sound card, two cables designed for use with your phone and your PC, and a cable adapter for computers with separate mic and headphone inputs. 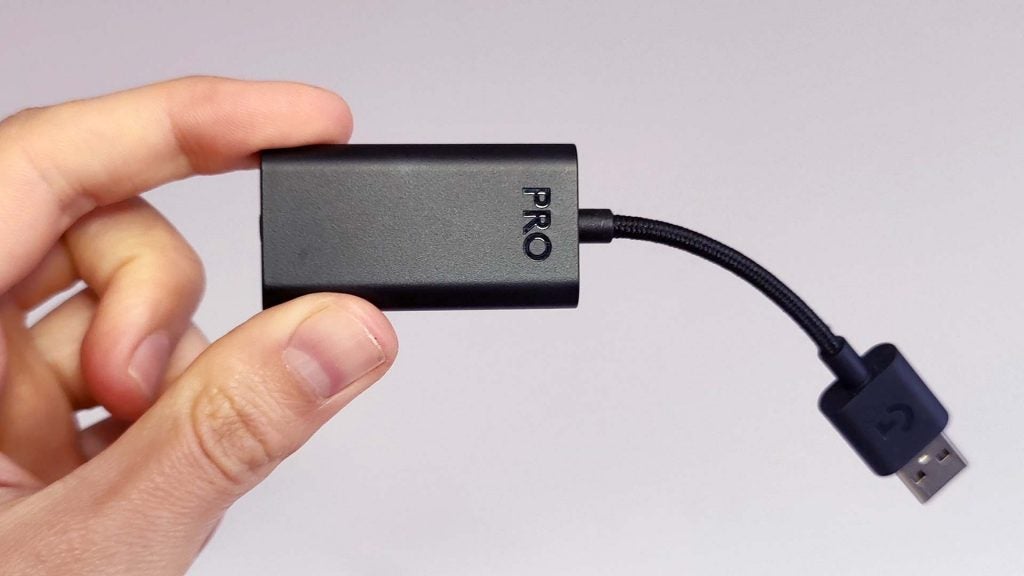 The Logitech G Pro X has 50mm drivers, most likely the same as those of the standard G Pro.

Their sound is solid. It’s easy on the ear, the scale is good, but does not quite break out of gaming headset expectations in the way the very best do.

The Logitech G Pro X has deliberately enhanced bass, to give the sound weight and a richer character. This is a fairly sensible strategy, as the last thing you want is for a gaming headset to sound thin. 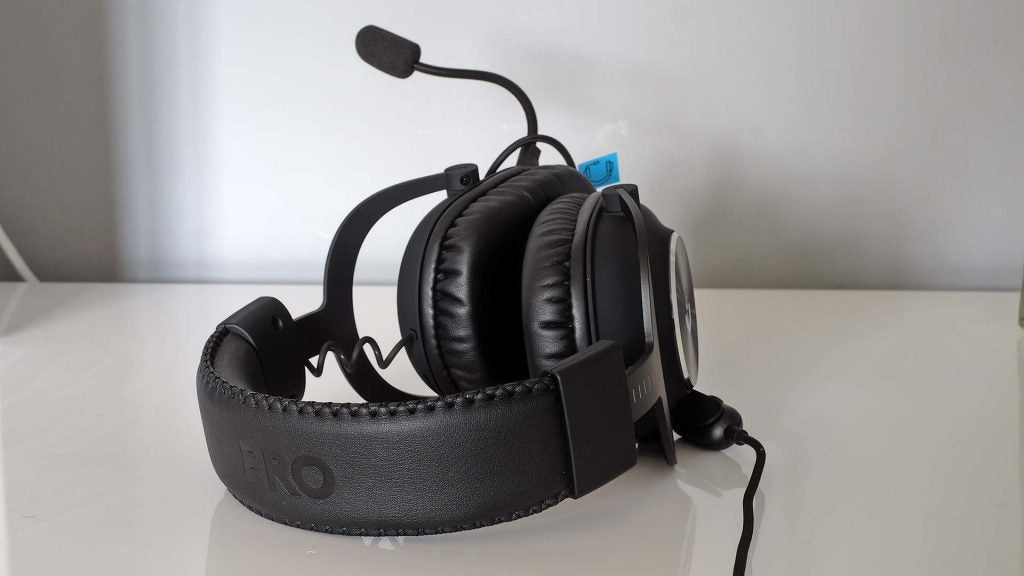 However, this bass boost is fairly generalised. Sub-bass that of the lowest audible frequencies is not particularly strong, and it is this kind of bass that adds excitement to the heightened on-screen action.

The bass emphasis also extends to the mid-bass range. This leads to it appearing to dominate at times, sitting under dialogue in a way that reduces clarity.

It is not just down to that mid-bass excess either, but a general lack of definition in the mid-range. Voices, whether those of singers or characters, do not stand out in the mix a much as I’d like.

The Logitech G Pro X’s sound field is also somewhat planar. It is relatively wide for a largely closed-back headphone (although this effect is likely improved by the long cup ports), but lacks the depth of the best headsets. Stereo imaging is diffuse rather than exact, and this is why the G Pro X is best used with a PC. 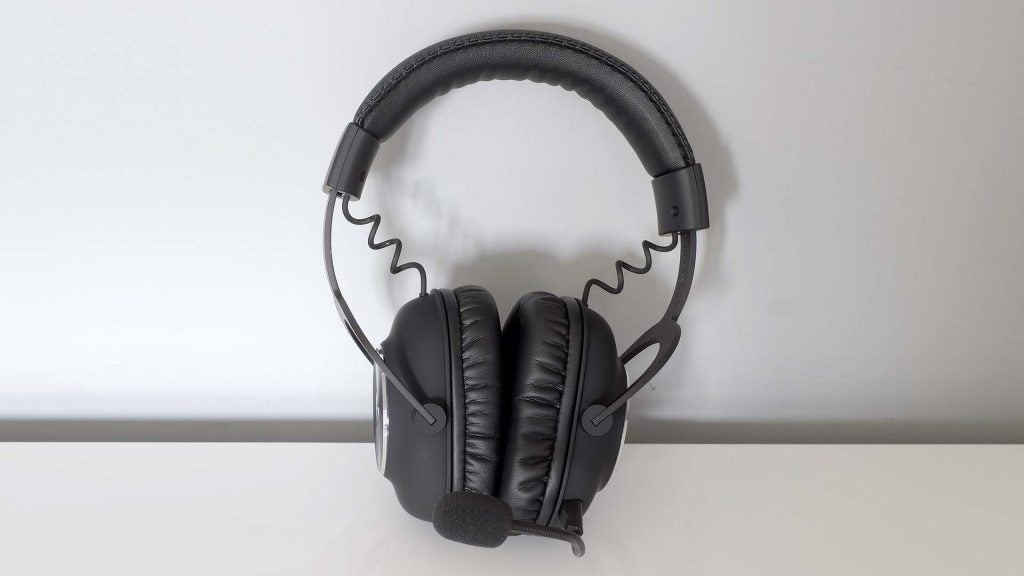 Logitech’s virtual surround sound, which you switch on in the G Hub app, helps matters. It firms up the central channel and makes imaging sound more deliberate. But you don’t get this with Xbox, PS4, Mac or Switch.

Treble is fairly safe. The highest frequencies are dampened, and the headset relies on the upper mids and lower treble for definition. This makes the G Pro X non-fatiguing if a little short on sparkle. But I’d rather that than grating treble.

Logitech G Pro X Headset Micrphone – Great features, but only with a PC

The Logitech G Pro X has a removable boom mic with a removable foam mic cover. This reacts like a bi-directional mic, which is not ideal as it picks up more ambient noise in the room.

Specs say the actual microphone has a cardioid pattern, picking up sound primarily from one side. But testing shows it simply is not all that directional, and as there are holes on two sides of the under-the-foam mic enclosure, both sides of the boom can “hear” fairly well. 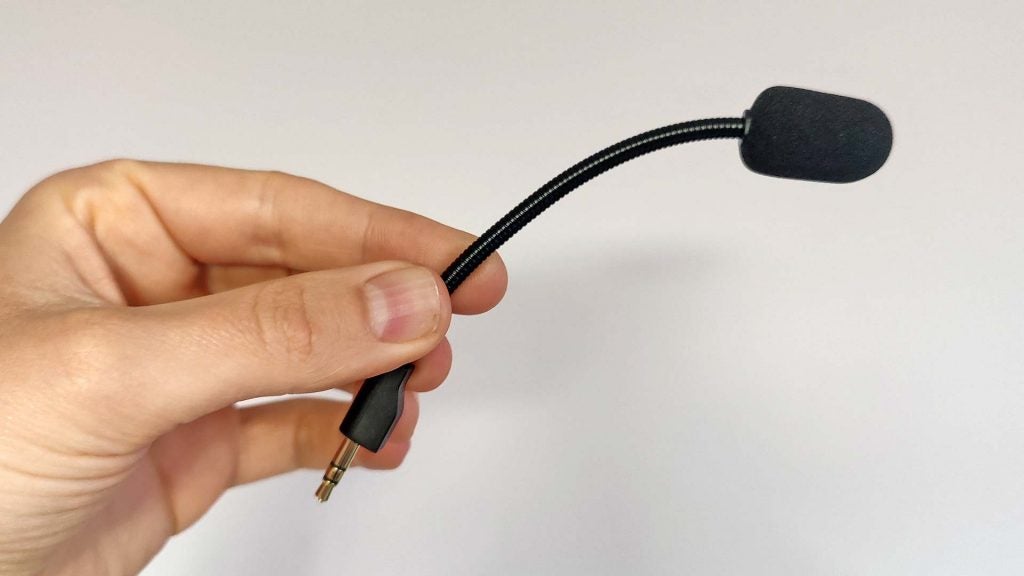 Logitech’s solution is to use a noise gate, where sound below a certain volume is filtered out. This is rather aggressive by default and gives the softer-spoken in particular a slightly scratchy quality.

The noise gate is part of Blue Vo!ce processing, an aspect of the G Pro X available through the G Hub, and only on PC. It’s one of the most important tweaks, as it can remove keyboard noise from your feed.

There’s plenty more too, including a de-esser, generalised noise reduction, high and low pass filters and a compressor, which should help your voice stand out a little more in team chat. 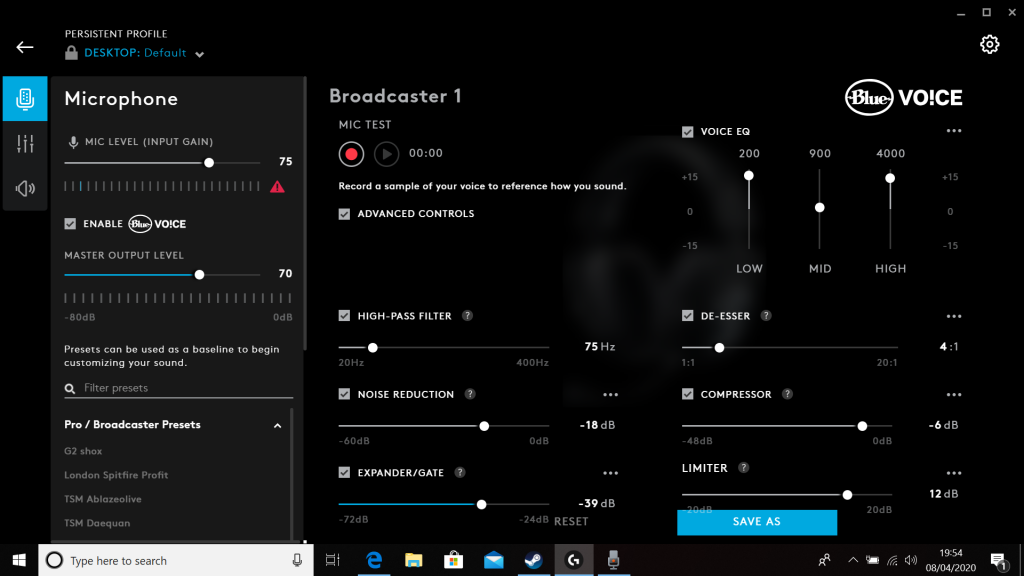 A few test recordings show basic EQ is the most obvious change provided by Blue Vo!ce, though. Without it, your voice will sound quite thin and weak, typical of a small, basic microphone. The standard EQ profile dramatically increases bass and treble, to bring the mic’s anaemic tone back to life.

Use the Logitech G Pro X with a console, and you miss out on all this. This headset does not actually have the superlative mic hardware you may expect after seeing the Logitech website and its mentions of Blue Microphones’s involvement, but results are improved dramatically through processing. The Logitech G Hub application also has a neat recorder function, to let you listen to the effects of changes to this processing without firing up a separate voice recorder. 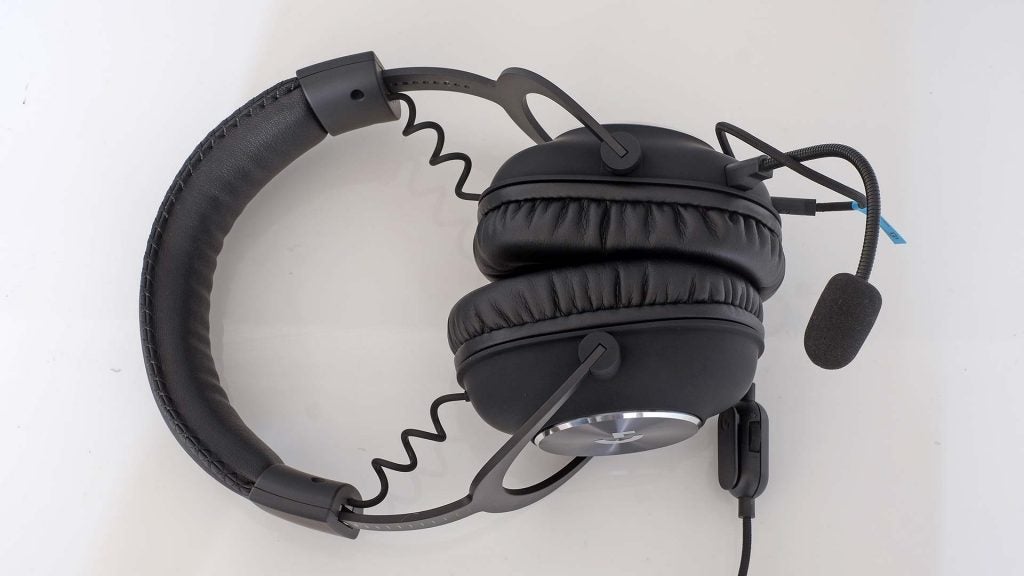 Should you buy the Logitech G Pro X headset?

The Logitech G Pro X is fairly easy to recommend to PC gamers who do not mind that it lacks Bluetooth wireless.

Its dedicated sound card improves the sound quality of your laptop and desktop in general, and the mic and sound processing bundled with it help patch over the limitations of the hardware.

The G Pro X’s boom mic does not sound that great “raw”, but Blue-branded processing bulks it up and lets you remove any annoying keyboard and mouse noise picked up.

Similarly, the G Pro X sound is fairly wide, but dynamics are a little flat and imaging diffuse, but this can be improved by the virtual surround mode. While the “surround” part may not be all that convincing, it does improve channel separation.

This is a headset you can use as wired headphones happily too. While a little bulk, the tasteful design lets them pass as a “normal” pair.

The Logitech G Pro X doesn’t topple our current favourite gaming headset the SteelSeries Arctis 7, which also has wireless. But its comfort is great and doubles as a pair of headphones well too.