Logik is Curry’s own brand of affordable products ranging from AAA batteries right up to huge US-style fridge freezers. Here we have the L814WM16 washing machine, boasting an impressive 8kg load, A+++ energy and 1400rpm spin speed for the very appealing price of just £189.99.

It cleans clothes fairly well, but its capacity is way short of the stated 8kg. The porthole is tiny, and on its first 1400 spin the machine took a walk across the lab. Levelled up carefully and with a sub-5kg load it works well enough, and it’s frugal on electricity and water too. For under £200 it certainly does the job. 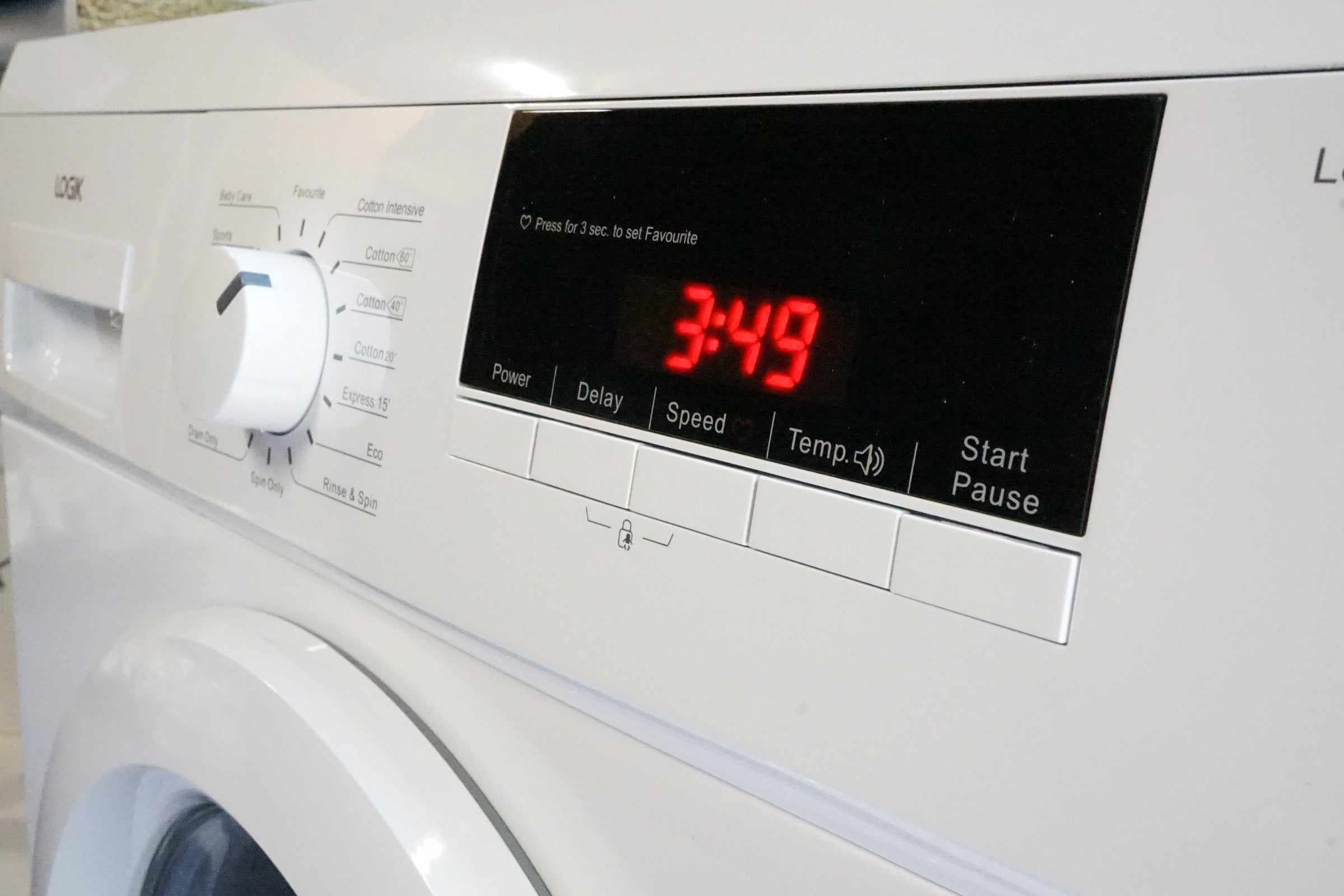 Few washing machines dip under the £200 price barrier, and fewer still do it sporting the outstanding specification of Logik’s L814WM16. Headline 8kg maximum load, 1400 spin speed and A+++ energy usually only appear on machines twice the price – or even more.

Its basic fascia layout actually looks quite minimalist and sophisticated. To the left you have a traditional three-compartment pull-out soap drawer. In the centre, a rotary programme selector knob. The display to the right features vivid red lettering in text big enough to see from the next county. This displays the wash time remaining in numerals, so bright in fact that the numbers have a fuzzy halo around them.

Buttons below the display encompass the main power switch, start/pause, up to 24-hour delay start,  temperature and spin speed. Give them a prod and the buttons have a rather squidgy feel, requiring quite a firm press. It’s all very straightforward to use, though. You can even save a custom combination of programme, temperature and spin speed as a favourite, directly accessed from the main programme knob. 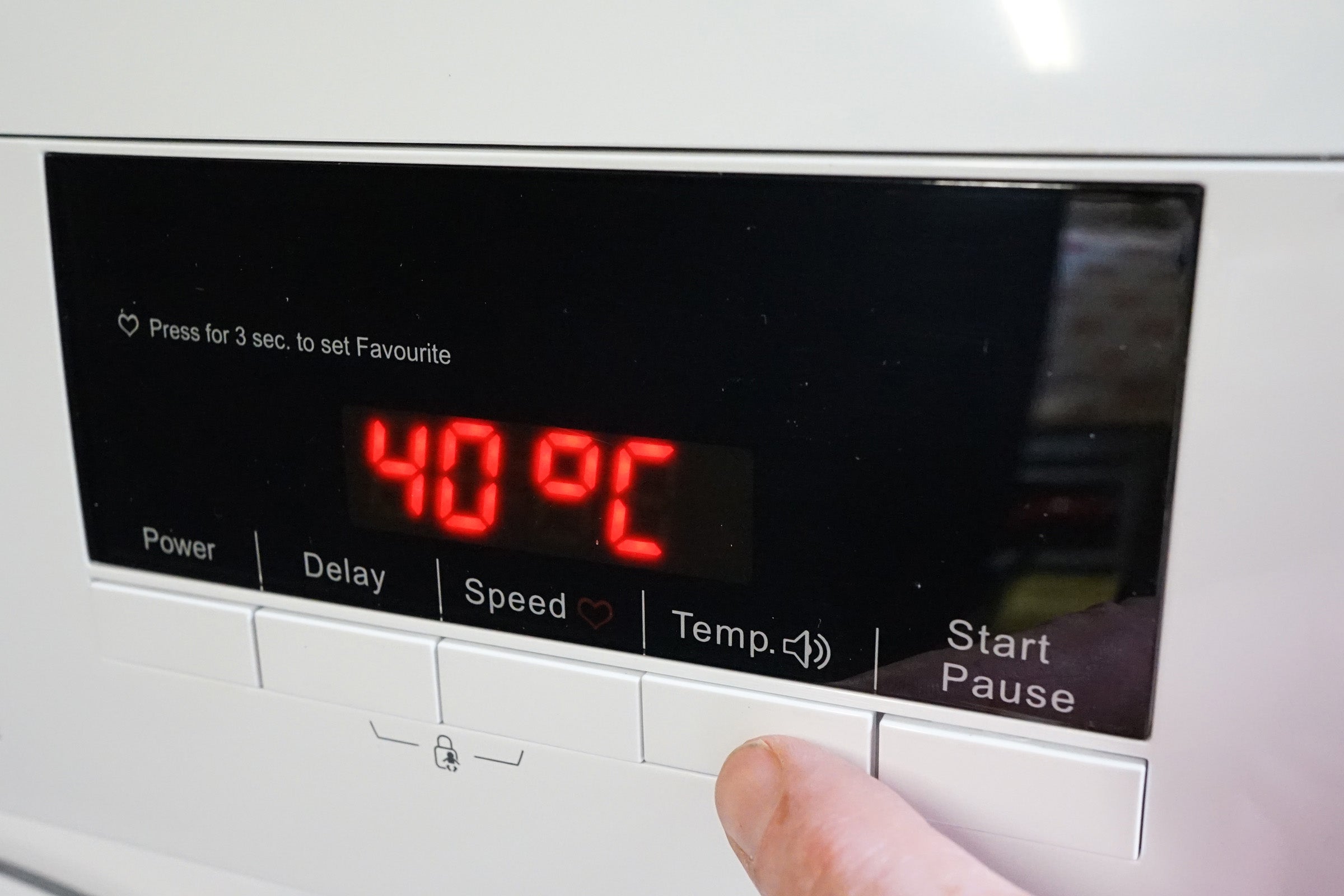 The porthole door looks rather out-of-date, in terms of its bijou size and plain white surround. It opens to reveal a porthole that’s equally old-school small. You’ll struggle to get a duvet through that opening without a fight.

Inside, the stainless steel drum looks rather compact for 8kg. Actually, it looks rather compact for 6kg. We duly tested some real-world washing loads, and 5kg of cottons made it look stuffed to bursting. Given that most washing machines will handle about 80% of their claimed maximum capacity in real washing, this Logik should really only be classed as a 6kg to 7kg model at best.

Lower down is a traditional round filter that will capture errant coins and similar objects before they jam the pump. It’s easy enough to twist open, but is concealed behind a flap that requires two flat-bladed screwdrivers (or butter knives most likely) and octopus-like dexterity to remove.

The machine offers four adjustable feet. As we discovered on our first spin test, getting the L814WM16 level and stable is essential to stop it from dancing off into the kitchen. 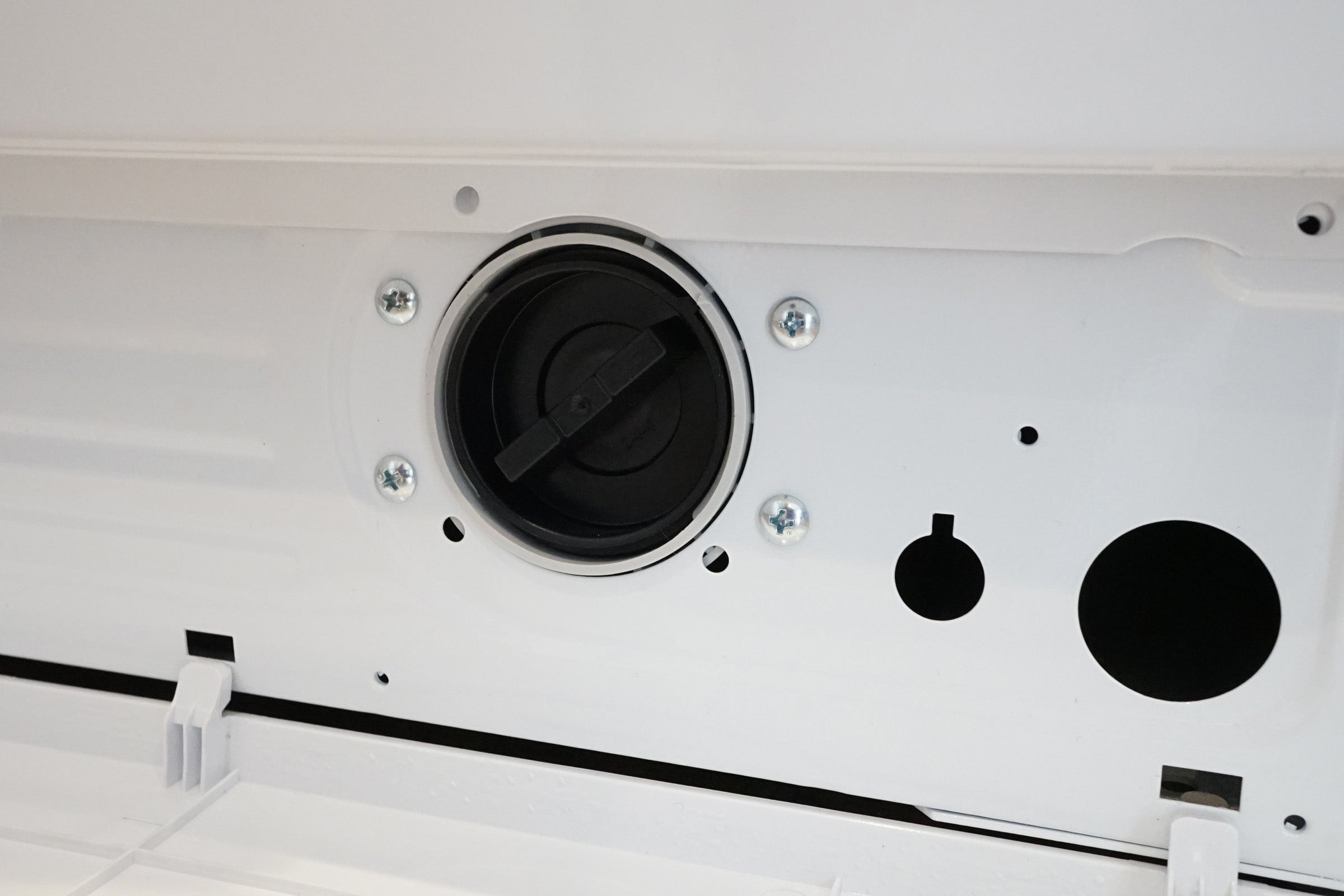 Despite the Logik’s budget asking price, the weight and build of the chassis feel. That should keep some of the noise at bay. While neither the energy label nor the manual promise quiet running, it wasn’t deafening on test.

The wash noise came in at an average of 56dB, which is getting up there with a coffee percolator in volume. That’s a couple of decibels quieter than stated, but the noise was rather peaky. The motor pulsing and turning the washing over didn’t exactly make for a lullaby-like sound.

The Logik redeemed itself on the spin noise test, where it came in at a solid 3dB below the energy label’s 77dB. 75dB is far from hushed compared to top-spec machines that can spin 1400rpm in the mid-to-high 60 decibels, but we’ve tested worse. Your old machine is likely to be much noisier than that. 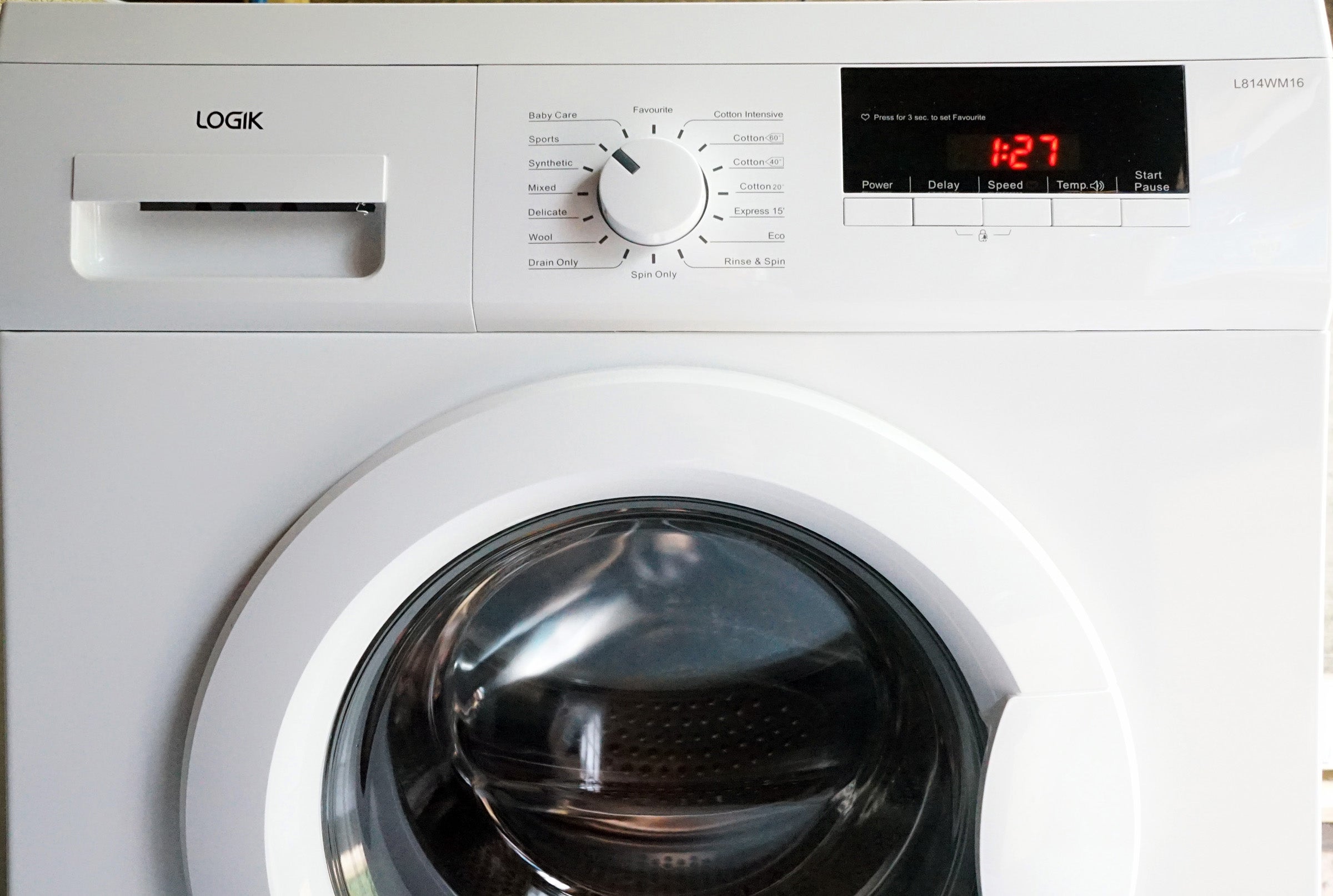 The headline figure of 16 programmes sounds impressive for such a budget machine. The reality is rather less comprehensive. Of those 16 programmes, four of them are Cottons washes at 20, 40, and 60ºC plus an Intensive cycle. On the plus side, all of those handle the full load capacity. Another three programmes are ticked off with Drain Only, Spin Only and Rinse & Spin.

Of the more interesting cycles you get an 8kg Mixed programme, 4kg Synthetic wash and a 4kg wash for Sports clothing. There’s an unusually large 8kg capacity Baby Care cycle and compact 2kg/2.5kg capacity programmes for Wool and Delicates respectively. 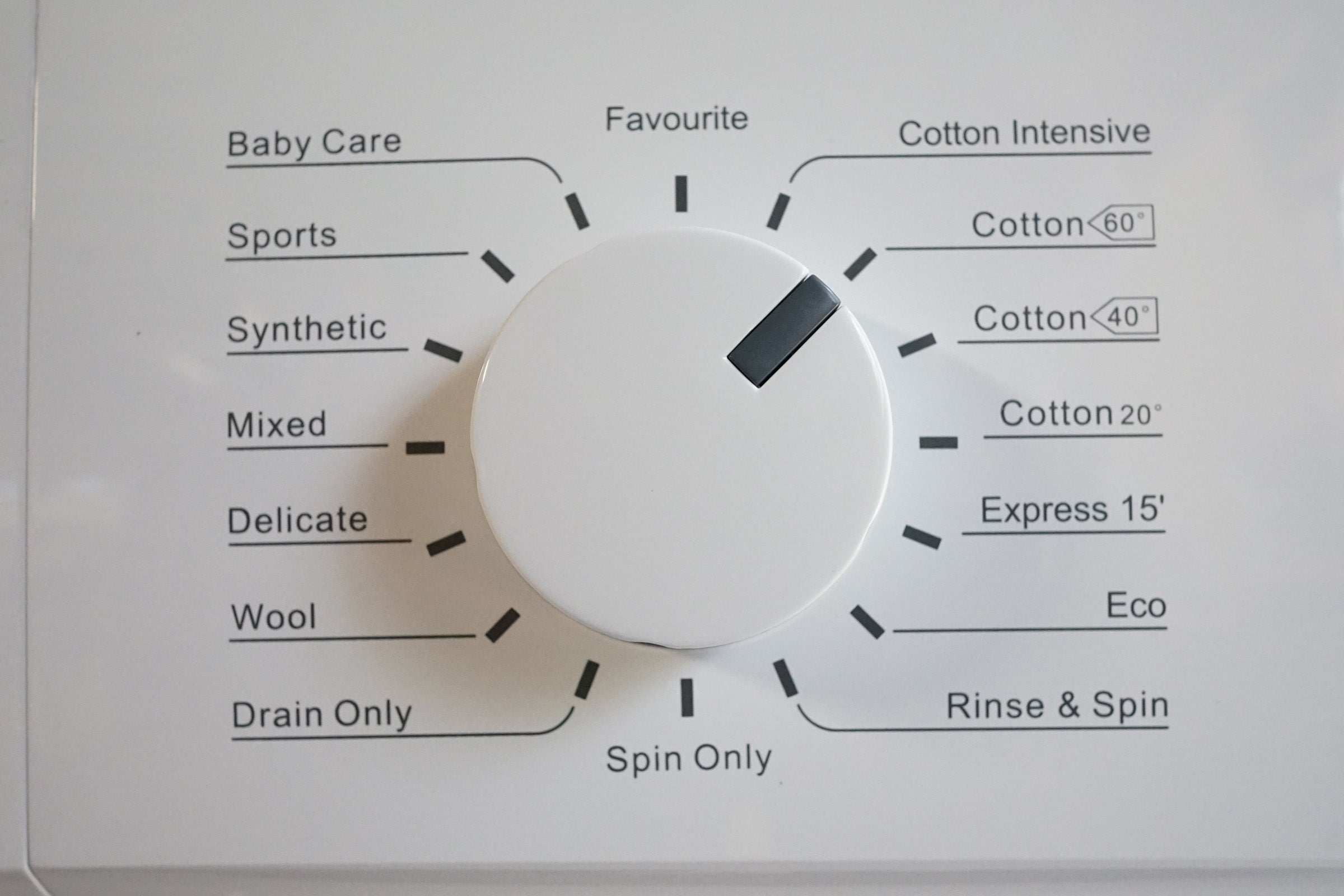 For those in a hurry, the Express 15 programme will wash 2kg of clothing in cold water in just 15 minutes. If you’re looking for a slightly more thorough wash for the same load, the Eco programme is an hour-long 30ºC wash with an energy-saving 800 spin.

The Logik is unusually flexible in allowing you to adjust the temperature and spin speed of almost all programmes. While other options are conspicuous by their absence, you do get a Delay Start, ability to turn off beeps and a Child Lock. The latter is achieved by simultaneously pressing and holding the Delay and Spin Speed buttons. 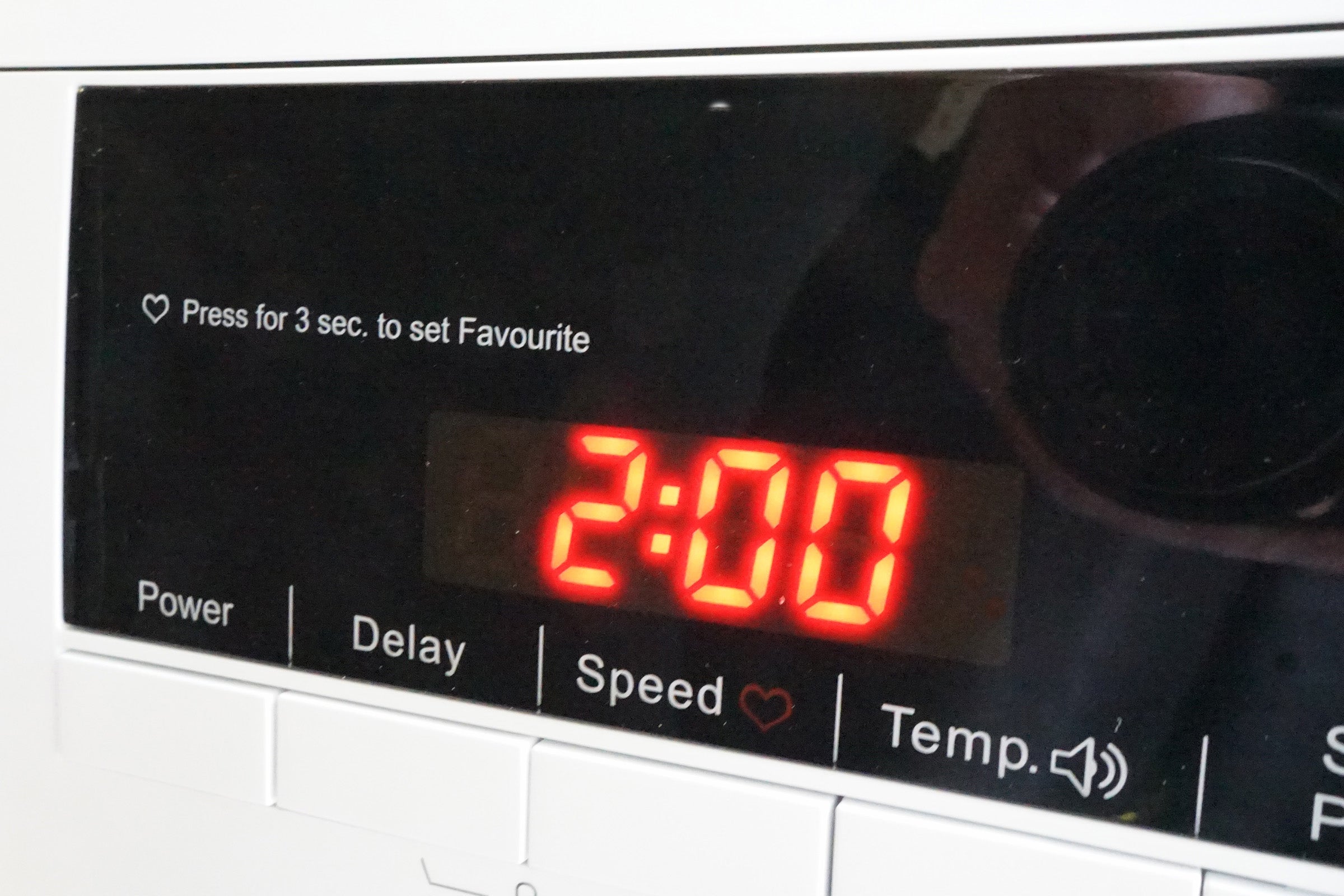 Given the L814WM16’s 8kg stated maximum capacity, we sorted out the usual 80% (7.2kg) of cotton clothing for the first full-load test. It didn’t fit. We took a kilo out and it still wouldn’t go in the drum. Eventually, we settled on 4.5kg as the effective maximum capacity of real-world cotton washing. As already mentioned, this machine would be more realistically billed as a 6kg model.

We ran this load on the 40ºC cotton wash with non-biological detergent and a test stain strip. This consisted of blood, coffee, turmeric, ketchup, blackberry juice and engine oil, all left for 24 hours to dry on nicely. The bright red display indicated this would take 3hrs 49mins. Which it did, despite being a much smaller load than the maximum stated.

Thankfully, cleaning results were none too shoddy. All of the test stains had been significantly reduced, even with the non-bio detergent. The blood, coffee, ketchup and blackberry juice were almost cleared, but close inspection on the lightbox revealed faint shadows on each stain area. The turmeric and engine oil stains remained prominent, but that isn’t unusual outside the very best machines. 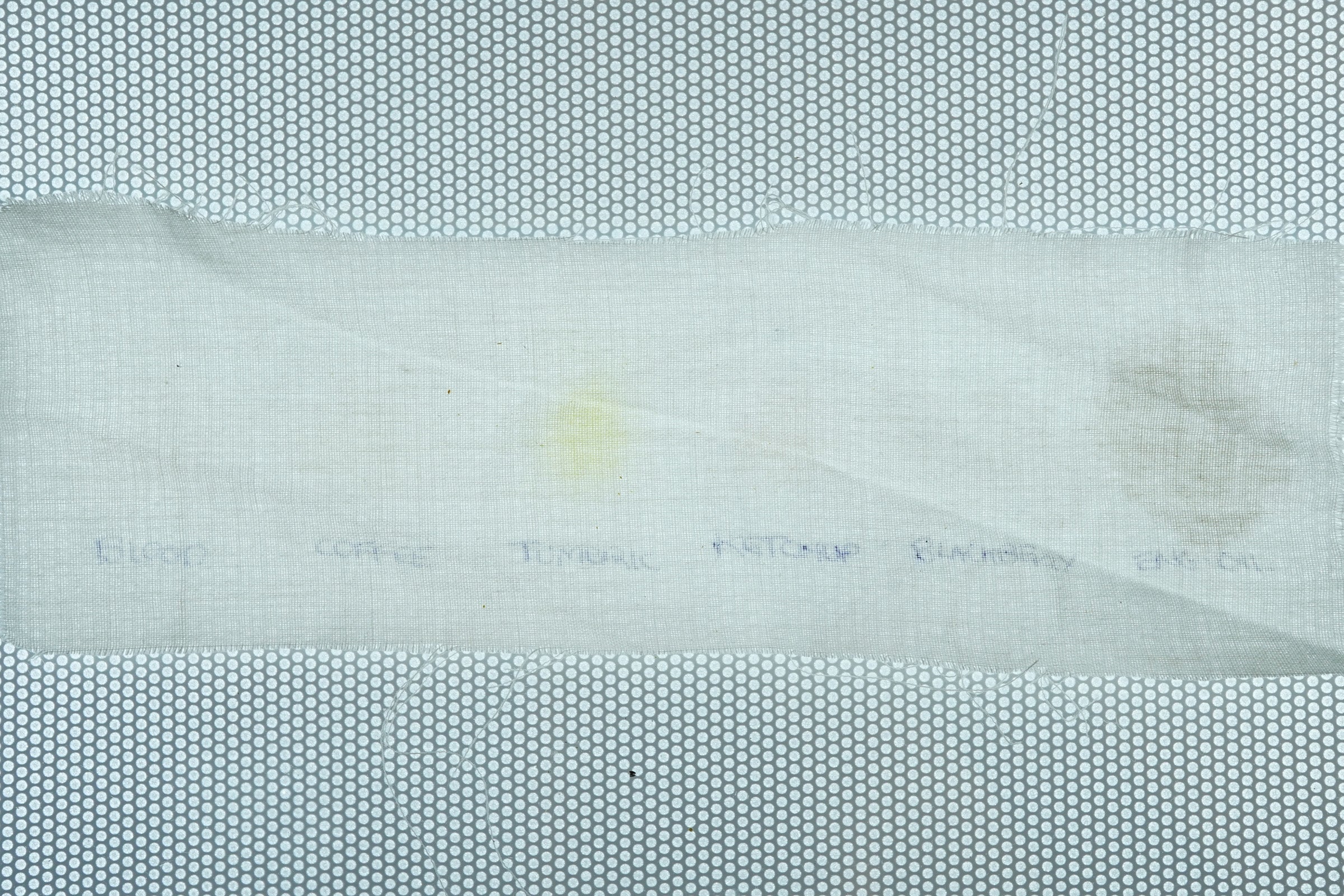 On removal the load felt rather heavy, even after the 1400 spin. It weighed over 6.2kg, meaning over 1.7kg of water remained in the clothes. That’s nearly 40% of the original load weight and very poor spin efficiency for a 1400 machine.

We tested another 4.5kg load on the same wash and got nearer 38%. Still not great. Guessing the drum design wasn’t the best for extracting water, we then tried two smaller loads of 3.5kg and 3kg. This resulted in 37% and then 35% of the original load weight in water remaining in the wash. The smaller the load, the more chance the machine has of extracting the water and the better the spin results will be. That’s quite a wide spread of spin efficiency results – and none of them are great for a 1400 spin machine.

We tried another 4.5kg load on the shorter two-hour Cotton Intensive programme. Cleaning results and water consumption were about the same as the standard Cotton 40 programme. However, energy consumption was 20% less, at just 0.65kWh. Reduced 1000rpm spin speed transpired on this programme to be the energy-saving gain. That left well over 2kg of water in the load – or a truly abysmal 46% of the original load. 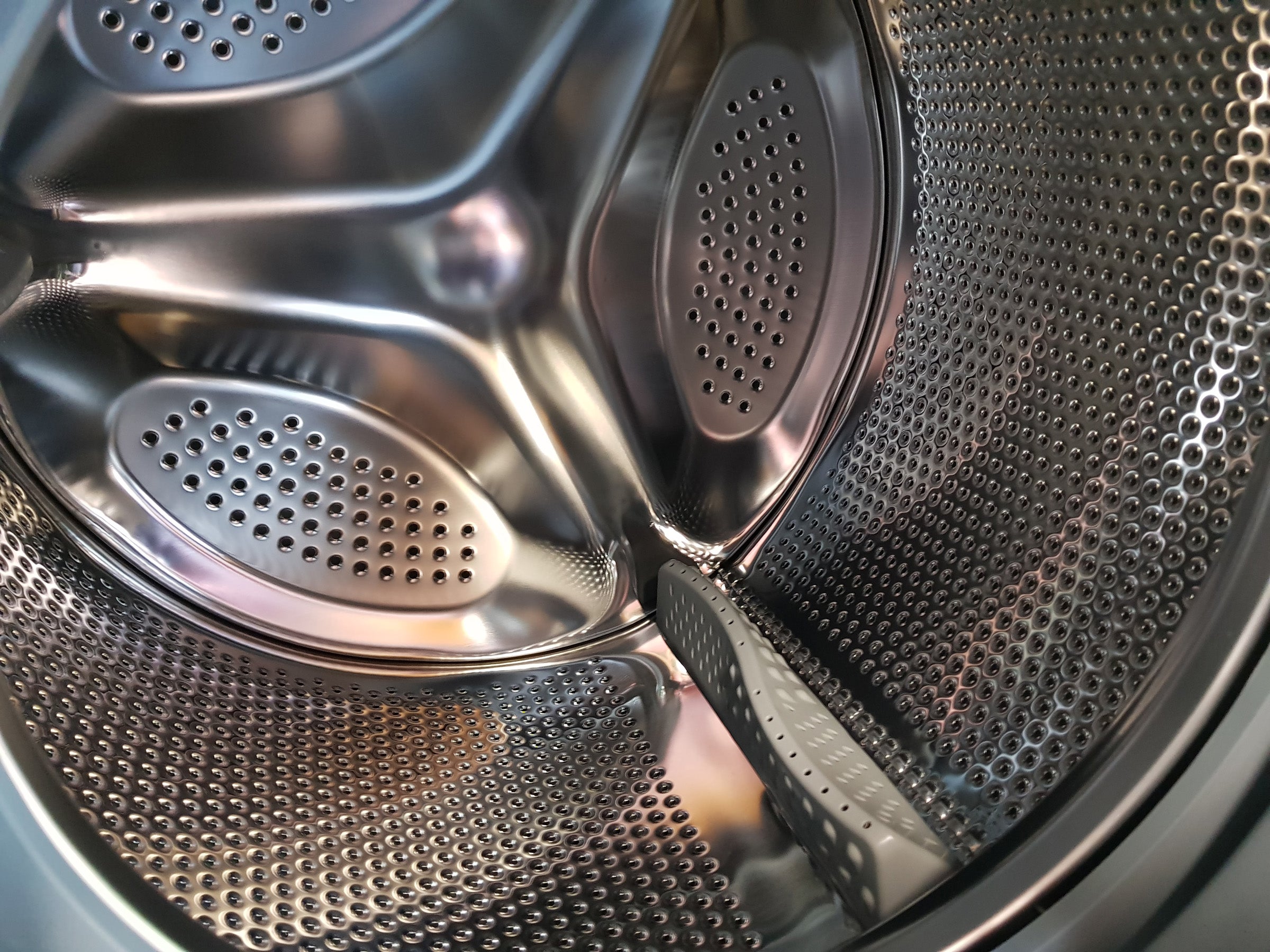 What we simply can’t gripe about is this Logik’s energy and water consumption. They’re both super-frugal. Water consumption was particularly impressive at around 40 litres in total for full-load washes and around 30 litres for most smaller loads. That gets a big thumbs up for those of us on a water meter.

Those positive figures do need to be tempered with the fact that our real ‘full’ load was just 4.5kg. So, the cost per kilogram of washing will be higher than machines with similar power consumption for the 6.4kg loads with which we usually pack 8kg machines. 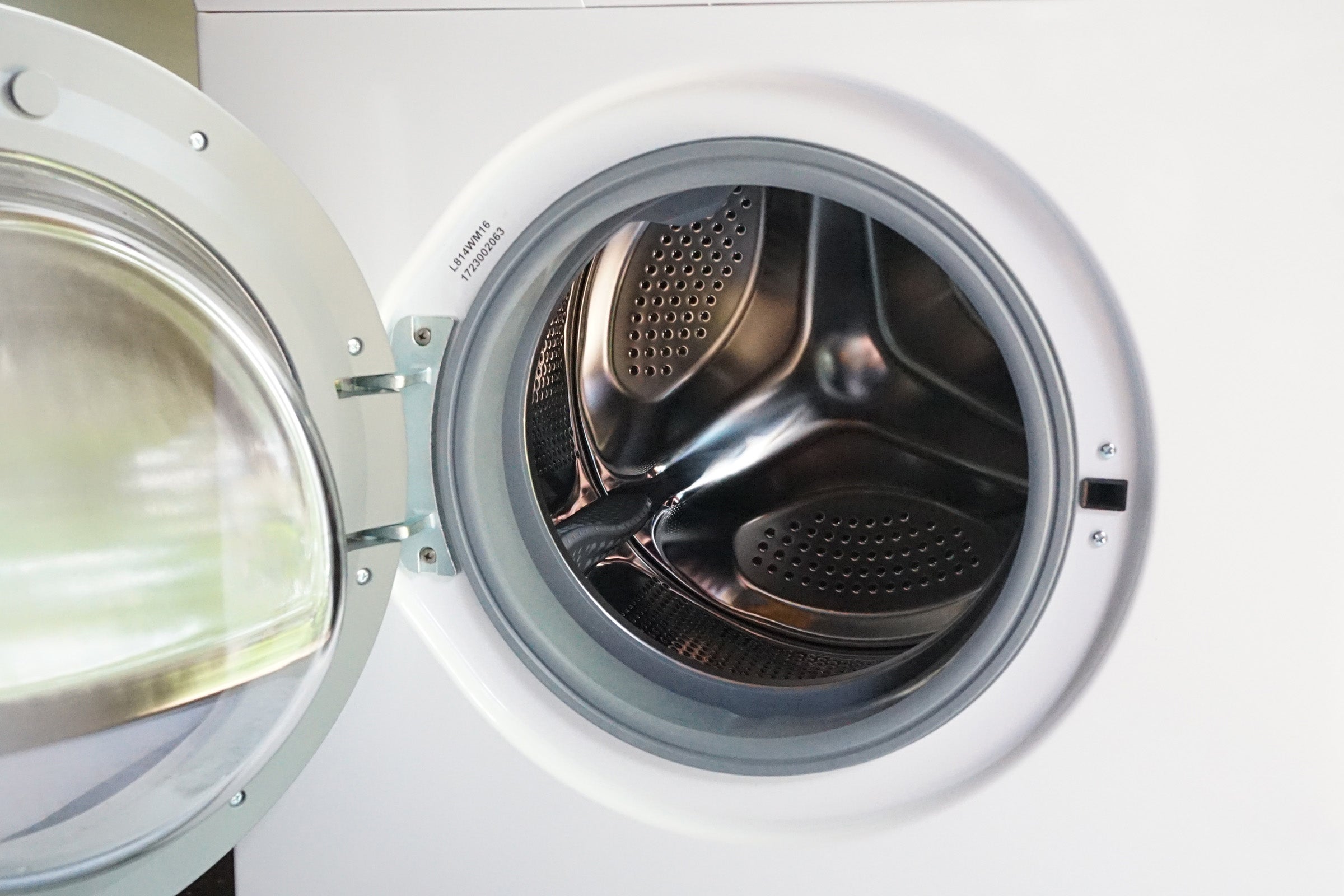 The frugal programme of choice is the Cotton 40 programme. Yet Cotton Intensive is quicker and uses 20% less power if you don’t mind drying off very wet washing afterwards. A real low-cost option would be this programme, a hot sunny day and a clothes line.

The A+++ rating is rather ambitious for the L814WM16, however. The 0.92kWh for a full load would certainly rate as A+++ if it took anything like a true 8kg load. Drop that down to a realistic 4.5kg load and you can knock off a ‘+’ or two. That still puts it up there in the A+ or better hot list of machines offering low running costs.

For the same washing regime, water consumption would be a veritable trickle at 9400 litres for the year. At an average bill of £3.50 per cubic metre for metered water and waste, that would cost just shy of £33 per annum.

These figures are great for keeping your washing running costs as low as possible. It’s a real shame the Logik L814WM16 doesn’t have a larger drum to really maximise these efficiencies, though. 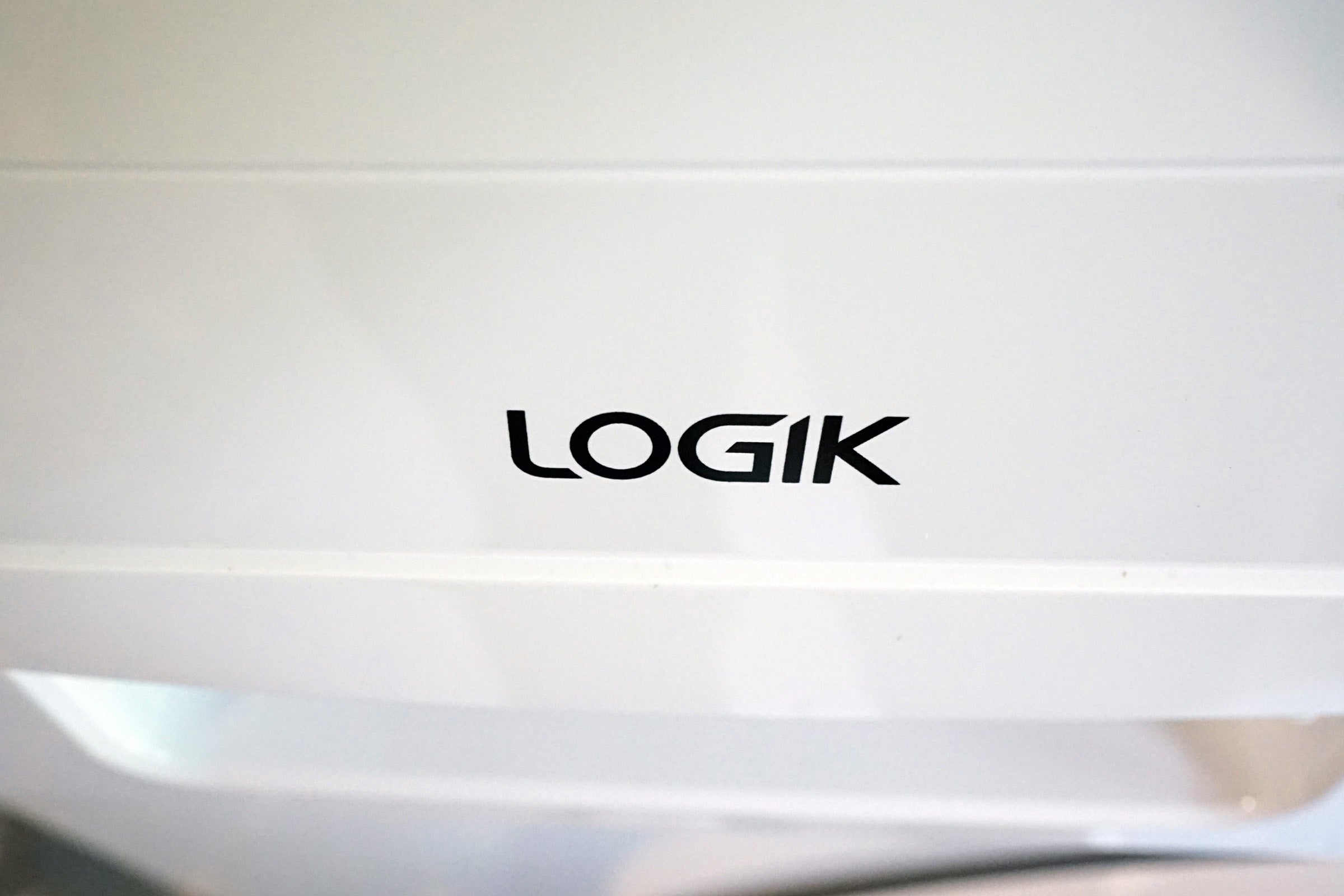 For a basic, low-cost machine with equally low running costs, look no further than the Logik L814WM16. It cleans reasonably well and does so sipping water and drawing very little electricity. Yet the small drum reduces its real load capacity to nearly half that claimed and undermines the fast 1400rpm spin speed, resulting in very poor spin-drying results.

It’s no surprise at this price that it has precious few programmes, options or features, and it needs careful levelling to stop it going for a walkabout. If you can live with these cut-price compromises and are looking for a machine that won’t cost the earth to buy or run, the L814WM16 could be the ‘Logikal’ choice.

A cheap and basic machine with super-low running costs – but its small drum limits load size.