The Connect ID 55’s operating system is a really mixed bag. The remote
control is a beautifully built device, with a metallic finish and
beautifully weighted design that feels divine in your hand. Its layout
is quite good too once you’ve got used to the fact that it doesn’t
follow typical remote control conventions.

Much less helpful, though, are Loewe’s onscreen menus. Someone clearly thought it would be a brilliant idea to make all the menus take up as little screen real estate as possible, cramming them into the bottom fifth of the available screen space. We guess we can understand the thinking here, as it leaves you able to watch pretty much a full picture while you surf the menus. The reality, though, is that the layout design leaves you having to trawl your way around a tortuous suite of sub-menus, all presented in a confusing horizontal format. 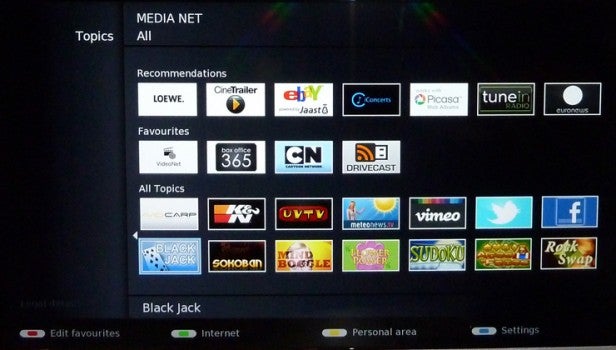 The only plus point is that, as you move between each feature, you get across the top of the screen a succinct and genuinely helpful explanation of what the feature you’ve highlighted actually does.

Also disappointing is Loewe’s refusal to put many picture adjustment options at your disposal. In particular there’s neither a serious colour management system nor a backlight control.

Delving into the Connect ID 55’s multimedia talents, pressing the Media button on the remote calls up a rather stark ‘hub’ menu from which you can get to everything from the installed DVB Radio channels and the archive for the DR recording system to the playback centre for any USB devices or networked PCs. Plus, of course, there’s an access point for getting into Loewe’s online services.

Sadly the ID 55’s online services are way off the pace currently being set by the big TV brands in the UK right now. The only services of note are iConcerts, Picasa, Tunein radio, ITN, BBC iPlayer, FunSpot, the Cartoon Network, HIT Entertainment, Box Office 365, and Twitter/Facebook apps for social media types. There are a few trivial games and very niche interest video services besides, but LoveFilm, Netflix, Acetrax, and Blinkbox – to name but a few – are nowhere to be seen.

It doesn’t help, either, that the online interface is very basic, providing minimal search facilities and requiring you to scroll across through dozens of icons to access everything. Thankfully, you can create a list of favourite services replete with shortcuts to the services you use most regularly. Assuming you can find any you actually want to use regularly beyond the iPlayer…

Just to be spiteful, we first tested the Connect ID 55 with standard definition feeds via the set’s built-in tuner, and a Sky box. And actually it did pretty well considering it had to upscale such noisy, highly compressed sources to a 55-inch screen. Pictures look decently crisp and detailed, and the upscaling is clever enough to add detail without making the picture look noisy (except for a slight shimmery look to contrasty edges). This is handy, as activating the set’s noise reduction feature doesn’t prove a happy experience, leaving images looking soft and processed.

Colours aren’t the punchiest we’ve seen with standard definition, but they do seem quite natural, and also largely avoid the patchiness and striping commonly witnessed with flat-panel TVs.

Despite the Connect ID being a more than solid standard def performer, it definitely comes to life with HD sources. Sharpness levels are very high – especially if you use the built-in image processing – taking full advantage of HD’s extra detail and crispness. In fact, at times HD pictures look too sharp with Image active – though we’re not necessarily advocating that you turn it off, as doing this causes a pretty noticeable drop off in the image’s contrast.

The strong colour performance noted earlier is underlined in HD mode, as the natural tones are joined by impressive subtlety when it comes to colour blends and tonal shifts. To be clear, we’re not talking about class-leading colour range here, and some people might prefer a more vibrant colour approach than that of the Connect ID 55. But from a picture enthusiast’s point of view, the Connect ID 55’s efforts are attractive because they put accuracy ahead of showboating.

The set handles motion quite nicely too, delivering only minor amounts of resolution loss when showing motion, and minimising judder with the Image system in play. There’s a further Film Quality Improvement option that’s designed to, “Reduce jolt in rapid picture object movements and rolling text displays, especially for movies”. However, this processing is too heavy-handed for our tastes, leaving pictures looking unnatural, so we wouldn’t recommend that you use it.

Used as the main TV for the review period
Tested for more than a week
Tested using industry calibrated tools, discs and with real world use
Tested with broadcast content (HD/SD), video streams and demo discs
Previous
Loewe Connect ID 55 Review Next
3D and Conclusions Review