With many others phone manufacturers choosing to ditch the headphone jack, it’s almost novel of LG to stick with for another year. However, LG hasn’t only made the decision to leave the 3.5mm plug tin place, it actively makes it better by pairing it with a fantastic quad-DAC inside the phone. Plug in a pair of decent headphones, and even music from sources such as Spotify will sound significantly better than it does on other handsets.

LG’s focus on audio even extends to music-listening without headphones. In the G7, LG introduces a new feature called ‘BoomBox’. This uses the spare space inside the phone’s body as a resonance chamber to improve the sound output. Put the device on a flat, hard surface and you’ll hear an instant improvement to the volume – and the bass. In such placement audio quality is better than anything else I’ve heard on a phone.

However, the sound isn’t so impressive when you’re simply holding the phone. The LG G7 includes only a single mono speaker on the bottom of the device and this is easily blocked. In addition, the rear of the handset vibrates ridiculously whenever sound is playing and it isn’t sat on a flat surface. In theory the idea is a good one, but it doesn’t quite work the way I’d want. 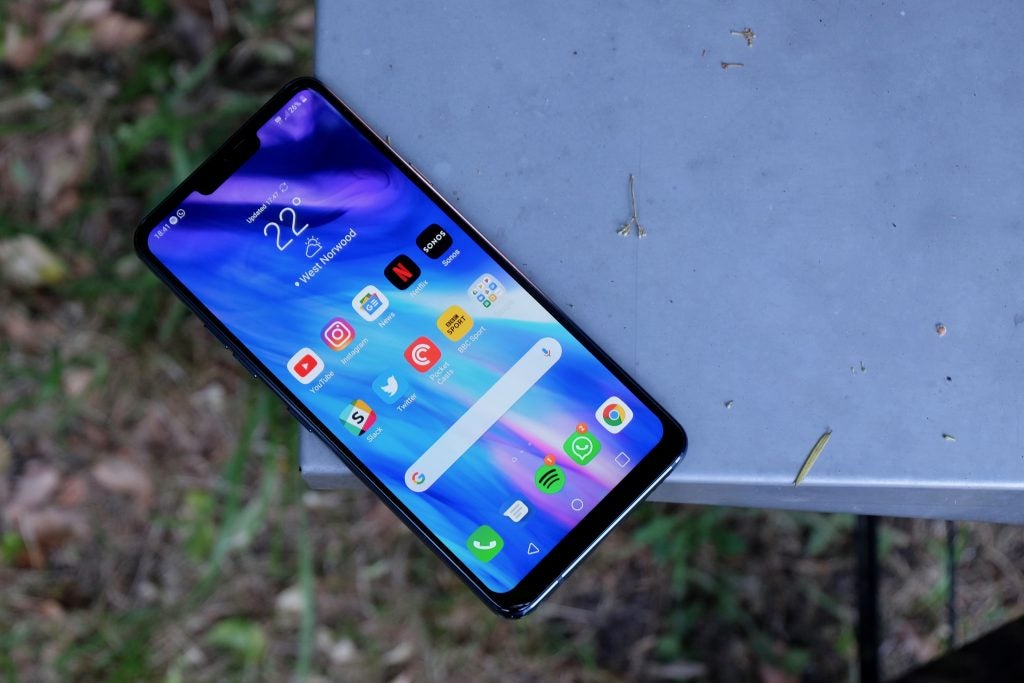 I do appreciate the fantastic vibration motor LG has used here, even though it hardly seems like a glamorous thing to mention. It’s powerful, but also manages to deliver a softer haptic response. Most Android phones disregard this area entirely, so it’s great to see it work so well here.

General performance from the Snapdragon 845 and 4GB of RAM is good, if not consistently great. This isn’t necessarily down to the chip; it’s the animations in the software that give the impression of sluggishness. For example, there’s a swipe gesture that brings up a search bar on the homescreen and it opens like it’s trawling through mud.

The Snapdragon 845 is as capable as any other chip out there and will run the latest games and intensive apps with ease. You’d expect that from a phone costing upwards of £600 and $750, however.

Check out the benchmark scores below

The only storage option with which the G7 is available is 64GB, but that’s made up for with the inclusion of a microSD slot. There’s no dual-SIM support, however.

I’m not the biggest fan of LG’s version of Android. The skin and additional features laid upon Android 8.0 feel like a step backwards for the operating system and rarely improve upon what’s already there.

LG has resisted adding any form of gesture control to the UI, the Settings menu feels cramped and therefore difficult to navigate, there’s no Google Now panel, and it doesn’t seem to utilise Android’s adaptive icons. The heavy reliance on white in the menus and extraordinary amount of bloatware also make the UI feel old-fashioned. 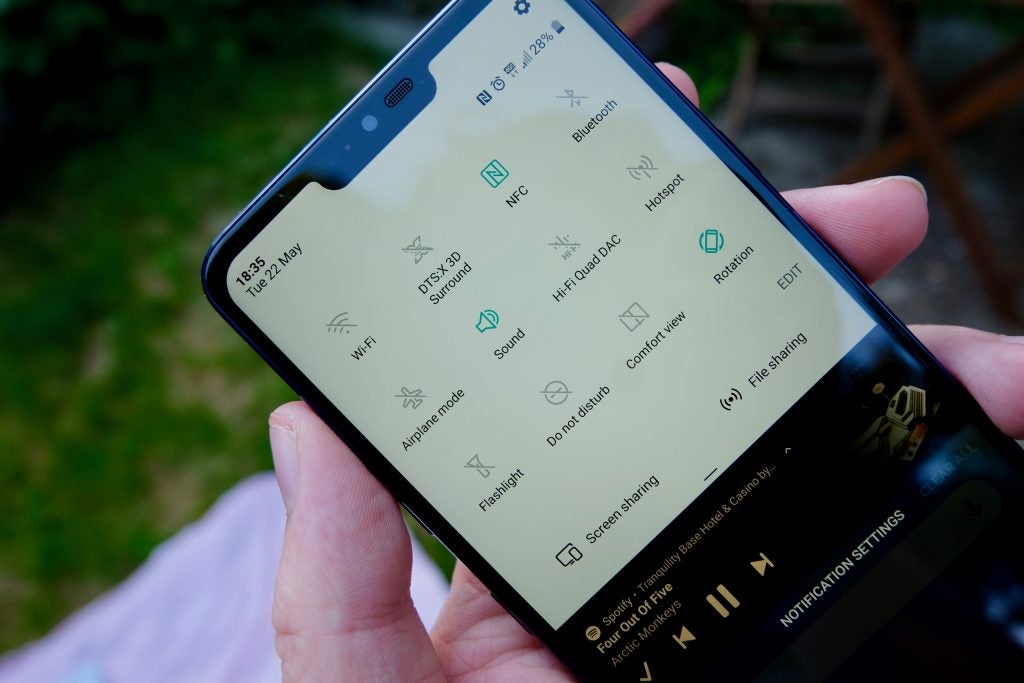 My review device came with countless duplicate apps and – something I really hate – a separate LG-branded store full of poor themes and downloadable nonsense. LG’s apps lack polish against those from Google, and they quickly ended up in some folder on a far-flung homescreen.

One marginally more interesting software feature is tied to the ThinQ branding for the G7. ThinQ is LG’s smart home platform. It aspires to let every LG smart device – be it a fridge, soundbar, TV, washing machine or phone – communicate and be controlled via a central hub – which in this case is housed within the G7 ThinQ.

As such, the G7 ThinQ will be able to auto-discover and connect to smart devices in the same family on the same Wi-Fi network. From here you’ll be able to check the status and control all the smart appliances in your home from a single interface. It’s an interesting prospect – although it won’t be coming to the UK anytime soon. 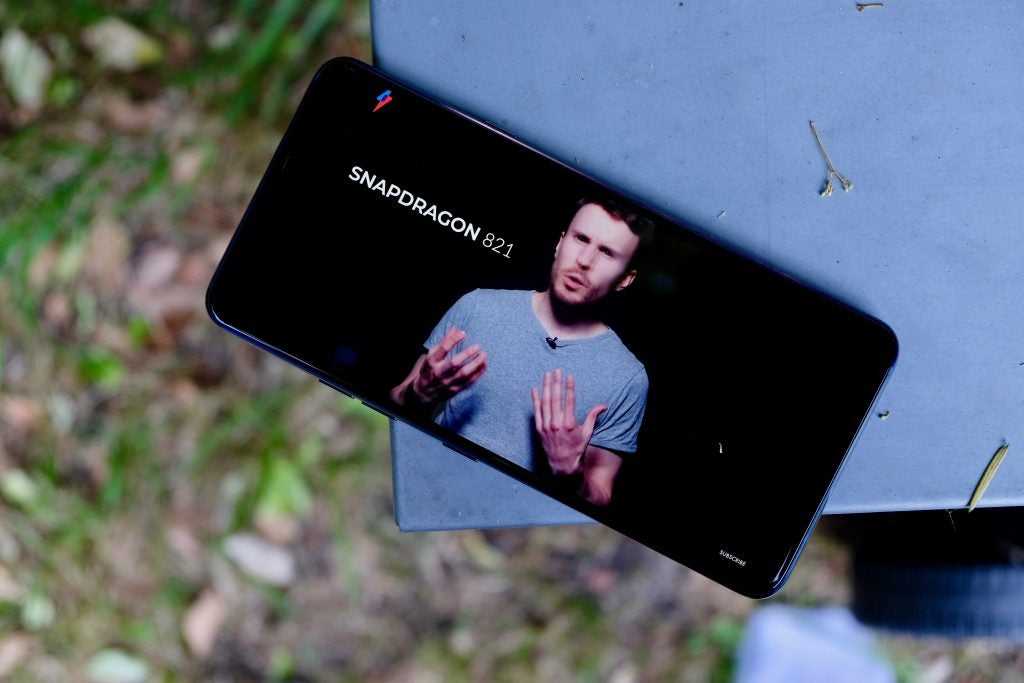 There’s a full set of biometric unlocking methods here, including the now common facial unlock and even voice unlock. I can’t think of many things worse than using my voice to unlock my phone, so I have stuck to using the face unlock feature. It works in tandem with other methods, such as fingerprint scanning, and it does the job fairly well. It isn’t as quick as the OnePlus 6, and there were times it simply didn’t work.