Built-in Internet applications can now be found on a growing number of Blu-ray players from the likes of Sony, Panasonic and Samsung, but it was LG that set the ball rolling in early 2009. The BD370 was the first player to use its Ethernet connection for something other than BD Live downloads or software upgrades, allowing you to stream videos from YouTube.

Since then, LG has added a couple of other sites and grouped them under the NetCast moniker, as well as introducing built-in Wi-Fi and DLNA media streaming on the BD390. At the same time, LG’s rivals have been upping the stakes with their own ‘on-demand’ web portals and other juicy networking features, turning the current Blu-ray player market into a fascinating technological playground.


LG’s latest gambit is the BD570, which like the BD390 is equipped with an enviable arsenal of wireless networking and multimedia features. It sits in LG’s range just below the 3D-ready BX580 but above the cheaper BD560, which lacks Wi-Fi and DLNA support. 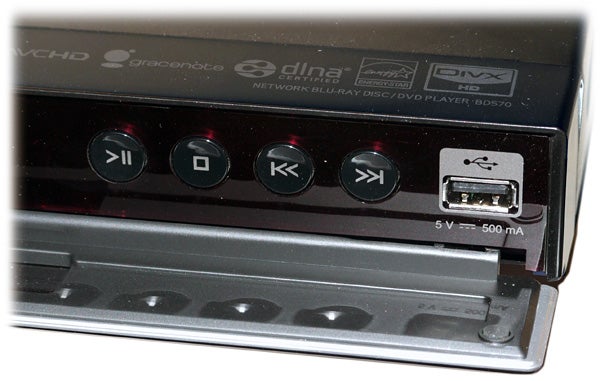 The BD570 is an immensely attractive player, with a dark translucent flap across the entire fascia that covers up the buttons, USB port and disc tray. This flap is framed by a glinting silver trim that adds a subtle touch of elegance to the overall design. Also pleasing is the sturdy aluminium casing and its wonderfully slim measurements.


The only notable omission on the back panel is multichannel analogue audio outputs, everything else is present and correct. There’s an HDMI output (version 1.3) that you can connect to a TV or AV receiver, plus a set of component outputs for old-school TVs and projectors. Optical and coaxial digital audio outputs provide alternative ways of sending Dolby Digital or DTS bitstreams to an amp, and these are joined by composite and analogue stereo outputs. Completing the line-up is an Ethernet port for those who don’t have a wireless router, or prefer the stability of a wired Internet connection.

But thanks to its built-in support for the 802.11n Wi-Fi standard (as well as b and g), the wireless connection is pretty stable too. Using this or the Ethernet port, you can access the afore-mentioned NetCast feature, which includes YouTube, Picasa and AccuWeather.com. These three sites aren’t really going to get people frothing at the mouth with excitement – especially when compared with the superb selection of content on Sony’s BRAVIA Internet Video – but the feature is gorgeously presented with full-colour animated graphics and operates smoothly.

Another trick up the LG’s sleeve is Home Link, which allows streaming of movies, music and photos from PCs, NAS drives and other DLNA-certified AV gear on your home network. Unlike some players, however, LG doesn’t limit you to common formats like DivX, MP3 and JPEG – it’ll also stream MKV, DivX HD, WMA, H.264, AVC, MPEG-1, MPEG-2 (PS and TS) and AAC.

Alternatively you can shove a storage device or external HDD (FAT16, FAT32 or NTFS) into the USB port and play the above file types, plus you can even rip audio CD tracks onto a connected USB device in the quality of your choosing – 128kbps, 192kbps, 320kbps or lossless. And don’t worry about tagging your tracks, as the deck does it automatically when you load the CD using the online Gracenote Media Database.


That’s the party tricks covered, but it’s worth remembering that the BD570 also does all the less glamorous donkey work, such as decoding HD audio soundtracks into multichannel PCM (or delivering them as a straight bitstream via HDMI), upscaling standard-def DVDs to 1080p and outputting Blu-rays in their native 24p frame rate. BD Live content can be accessed wirelessly, although you’ll need to connect a USB device in order for it to work.

The onscreen presentation is a lot fussier than Sony’s or Panasonic’s, but there’s no denying how stunning it looks. The Home menu has had a dramatic revamp and is bursting with innovation – it’s designed to look like a tank of water, with each of the icons bobbing up and down within a glimmering block of ice. When you highlight one it juts forward, while animated bubbles float up from the bottom of the screen.


The setup menu is a simpler affair but still easy on the eye, while the various menus for searching network content are tidily presented using Windows-aping yellow folders and a straightforward structure. What a pity then that all of these menus are sluggish, with the cursor pausing a moment too long when you press the remote. 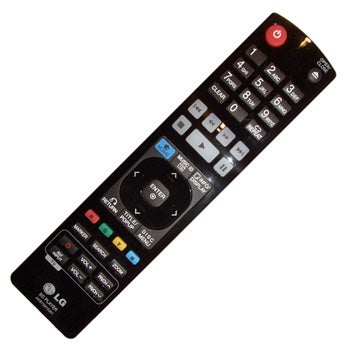 It’s a shame because a lot of thought has gone into the gloss-black remote’s design, with a large cluster of buttons in the middle governing the most-used features, with other well-labelled keys lined up around them in a sensible formation.


Hit Display while watching a movie and an eye-catching menu appears on the left containing information about the disc (selected audio track, chapter, subtitles etc) and provides access to a simple array of picture adjustments. There are three presets (Standard, Vivid and Movie) plus a user-defined mode that lets you alter brightness, colour, contrast, sharpness and noise reduction.


The BD570 is an assured picture performer too. The Silicon Optix HQV test patterns are a cakewalk for this deck – the edges of the rotating bars in the jaggies test are as smooth and stable as we’ve seen, while the Film and Video Resolution patterns are poised and free from strobing. The only minor foible we spotted is some gentle juddering as the camera pans across Raymond James stadium, but otherwise it passes every test without a hitch.

It’s equally impressive with movie material. Given ”Avatar” to play with, the BD570 reproduces the movie’s kaleidoscope of colours with all the vibrancy and potency you’d expect, plus the razor-sharp detail reproduction will make your jaw drop. Everything from Pandora’s incredible CG landscapes to close-ups of Colonel Quaritch’s battle-scarred body looks mesmerising, and when combined with the punchy blacks and the lack of picture noise, it adds up to a superb picture performance.


It’s not quite so assured with SD material, as the DVD version of ”Avatar” looks a little gauzy and suffers from mosquito noise. It’s watchable but we’ve seen better DVD upscalers than this.


On the audio side, the BD570 handles HD audio soundtracks without fault and has a good crack at music on CD. There’s a pleasing balance – not too thin or hard in the high-frequencies – which also works well when playing MP3 or WMA files through your sound system.


The BD570 is a brilliant Blu-ray player, boasting fashionable looks, a lengthy feature list, extensive format support and razor-sharp picture quality. It’s just a shame that the amazing-looking menu system is slow to react and that NetCast’s online content pales in comparison to that of the Sony BDP-S570, its closest rival. As a result, Sony’s similarly-priced deck is a better buy, not only for its superior BRAVIA Internet Video service but also for its 3D compatibility out-of-the-box and built-in BD Live memory.