Sony’s early Blu-ray players were overshadowed by the groundbreaking exploits of Panasonic, Samsung and LG, but in 2010 the format’s creator is out to redress the balance. Its latest range of players is as cutting-edge as they come, offering a wealth of multimedia features that make Blu-ray playback seem like an added extra.


The BDP-S570 sits towards the top end of Sony’s Blu-ray range, below the reference-quality BDP-S5000ES and the BDP-S770 but above the S370 and S470. Stand-out features are numerous but the headline grabbers are 3D playback out-of-the-box and built-in Wi-Fi, which provides cable-free access to the deck’s extensive networking functionality.

And as ever, Sony’s Monolithic design is a feature in itself. Nothing radical perhaps, but the wafer-thin bodywork and sleek black finish make it a wonderfully stylish and modern-looking player. The lower section of the fascia curves inwards then juts forward, creating a sort of platform that houses a row of discreet buttons. When powered up, a gentle blue light glows alluringly in the centre and a small display panel presents the key playback information clearly.


Two USB ports are provided (one on the front and one on the back), which is rather generous given that the deck doesn’t need a dongle for Wi-Fi or BD Live storage – it has 1GB of memory built in. That means both ports can be used for digital media playback from USB storage devices. The remaining rear panel connectivity includes an HDMI output, which is specified as v1.4 to carry those Full HD 3D pictures, component and composite video outputs, analogue stereo out, plus coaxial and optical digital audio outputs. Finally an Ethernet port provides an alternative way of hooking the player up to your home network.

Most people, however, will take advantage of the built-in Wi-Fi adapter, which supports the 802.11a, b, g, and n standards. The ease and speed with which you can connect to the Internet provides an incentive to check out BD Live and other web content. Setup is simple too – choose ‘wireless’ in the network settings, then run an access point scan or link the player up to your router using the Wi-Fi Protected Setup (WPS) system. Job done.


The quality and quantity of Sony’s Internet content makes it superior to other web portals like Panasonic’s Viera Cast or LG’s NetCast. The BRAVIA Internet Video feature boasts BBC iPlayer, Demand Five, LoveFilm, YouTube, Dailymotion, and Eurosport alongside news, music videos, sport, lifestyle, podcasts – the list goes on. Culture vultures can even check out the latest phat sounds from the Berlin Philharmonic Orchestra through a premium streaming service.

This wide range of services should offer something for everyone, but if not then you can stream your own content from connected PCs. The DLNA-certified player will stream music (MP3, WMA, AAC), video (DivX HD, MPEG-1/-2, MKV, AVI) and photos (JPEG) and the same file types are also supported from USB storage devices. It also plays WMV and AVCHD from discs and USB only.

There are plenty of other features besides. The BDP-S570 will spin Super Audio CDs, transferring the hi-res DSD stream over HDMI, and when you load a Blu-ray, DVD or CD it downloads the details and cover art from Gracenote’s online database. HD audio formats are output as bitstreams or multichannel linear PCM. Chuck in Deep Colour and x.v.Colour support, 1080/24p output, 1080p DVD upscaling and Precision Drive HD, which helps the deck to play scuffed discs, and you’ve pretty much got all bases covered.


Next we come to the operating system, which again uses Sony’s Xross Media Bar as its backbone. We’ve sang the praises of this dual-axis design enough times so we’ll spare you the description, but it’s worth reiterating that it’s one of the most distinctive and intuitive GUIs we’ve encountered. With so many features on board there’s a danger it could get over-cluttered and confusing, but thankfully the clean, logical layout allays that particular concern. 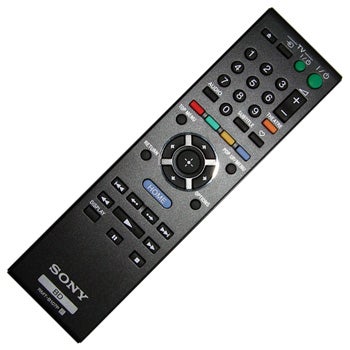 Surfing around these menus with the ergonomic remote is a pleasant experience. It’s not bogged down by a bevy of seldom-used buttons or baffling logos – the frequently-used controls are placed exactly where you’d want them and the other keys are clearly labelled. If you’ve got a Sony TV it can also be controlled using this handset.


Most of the adjustments are made in the Setup menu (including the 3D and network settings) but further tweaks are tucked away in the Options menu, which can only be accessed during playback. Here, you’ll find some picture adjustments, including presets for different lighting conditions, random, block and mosquito noise reduction and a mode that improves the look of Internet video.


We’re hugely impressed by the deck’s overall operating speed. Boot-up time from standby is just three seconds, although that’s with the Quick Start mode activated, which uses more power in standby. Disc loading is fast too – it fired up ”Terminator Salvation” in an impressive 37 seconds.

Not only is the BDP-S570 a smooth operator, but it also delivers outstanding picture quality. The deck’s video circuitry takes every last pixel of ”Terminator Salvation’s” 1080p transfer from the disc and delivers them to the screen over HDMI in the purest, cleanest way possible.


The result is meticulous detail reproduction, best demonstrated by the movie’s sparse, desolate landscapes – as Marcus evades a T-600 in chapter 4, the razor sharp presentation of battered buildings and rubble really brings the scene to life. As it cuts to the T-600, you can make out all of its grisly mechanical detail. None of the image subtleties escape the Sony’s grasp.

This, combined with the punchy blacks and excellent shadow detail, gives the image the sort of depth and cinematic lustre we long for. The colour palette is strong yet natural, rendering Bryce Dallas Howard’s pale skin as convincingly as Christian Bale’s darker, dirt-smudged face.


It’s also a dab hand with motion, keeping judder at bay on camera pans, and it passes all the key tests on the Silicon Optix HQV Blu-ray disc. DVDs also look superb when upscaled to 1080p, making this a fantastic choice if you have a large collection of SD discs that you don’t want to replace.


Testing out the S570 gave us the chance to dust off some of our old SACDs, and the BDP-S570 does an excellent job with them. The bubbly rock of ”The Police’s Greatest Hits” sounds warm, dynamic and most importantly detailed, with clear vocal reproduction and a healthy amount of bass.


Sony took a while to get its act together, but it’s finally making some of the best Blu-ray decks in the business, and the BDP-S570 is one of them. Actually, calling the BDP-S570 a Blu-ray deck is like calling the iPhone a mobile – it does so much more than play discs, with a range of smooth networking features and wide multimedia support. Yes it’s expensive, but the astonishing feature list, spellbinding performance and top-drawer operating system could make it the best £200 you’ll ever spend.