With Bluetooth connectivity and automatic milk frothing, the Krups Evidence EA893840 is well-specced for the price, but the lack of automated maintenance and slightly fiddly controls detract slightly from the experience.

Bean-to-cup coffee machines might be the ultimate in convenience, but they’re often big and bulky, taking up a lot of room in your kitchen. The Krups Evidence EA893840 is a smaller, more manageable machine that squeezes in automatic milk frothing capabilities too. Plus, there’s Bluetooth connectivity so that you can control the machine through your smartphone.

Limited connected options and a lack of automatic maintenance options count against the machine, although it produces a quality shot of espresso.

The first thing you’ll notice about the Krups Evidence EA893840 is its size. Measuring just 363 x 240 x 350mm, this is one of the smallest bean-to-cup machines I’ve reviewed. It’s smaller than many manual machines, so you won’t need to make much room for it in your kitchen.

As with most coffee machines, the Krups Evidence EA893840 is built from plastic. Nevertheless, the matte black sides and glossy front look quite classy. The chrome front that houses the spout looks great, too.

The machine’s spout can be moved up and down, giving a clearance between 80mm and 160mm. That’s enough to accommodate pretty much every type of cup size, bar the very tallest latté glasses.

The milk tube plugs into the right-hand-side of the spout. While the connector block inside can be removed for cleaning, you can’t reverse it, so you’ll have to keep the chunky metal milk carafe to the right. It’s a shame that there’s nowhere to store the tube when it isn’t in use. Other manufacturers provide a plug-in socket in the drip-tray, so you can plug in the jug end of the cable. 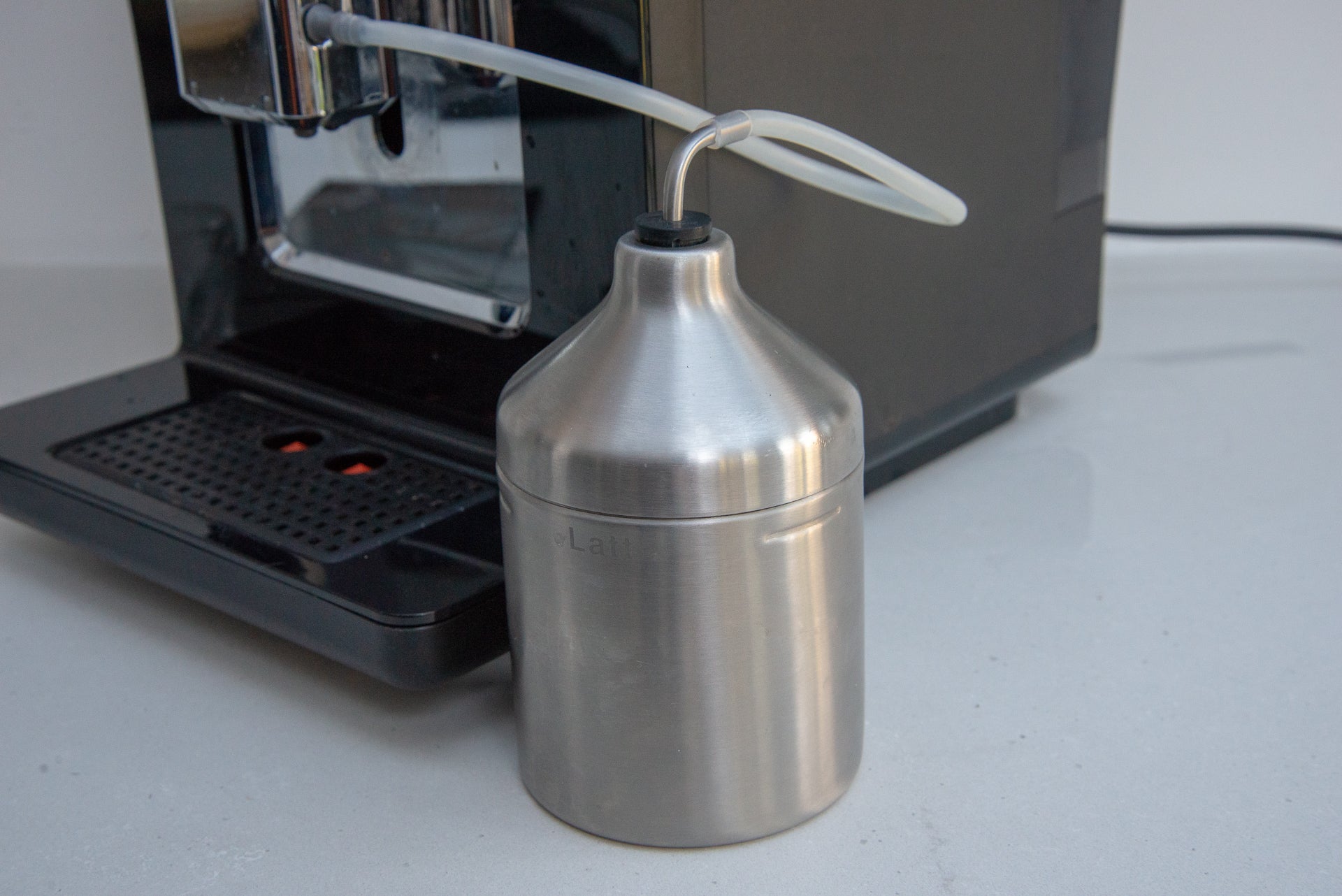 Control of the Krups Evidence EA893840 is via its touch-sensitive buttons on the front, which never failed to respond to my touch. A small LCD panel displays the current option – it’s very basic, but then you don’t really need a lot more. 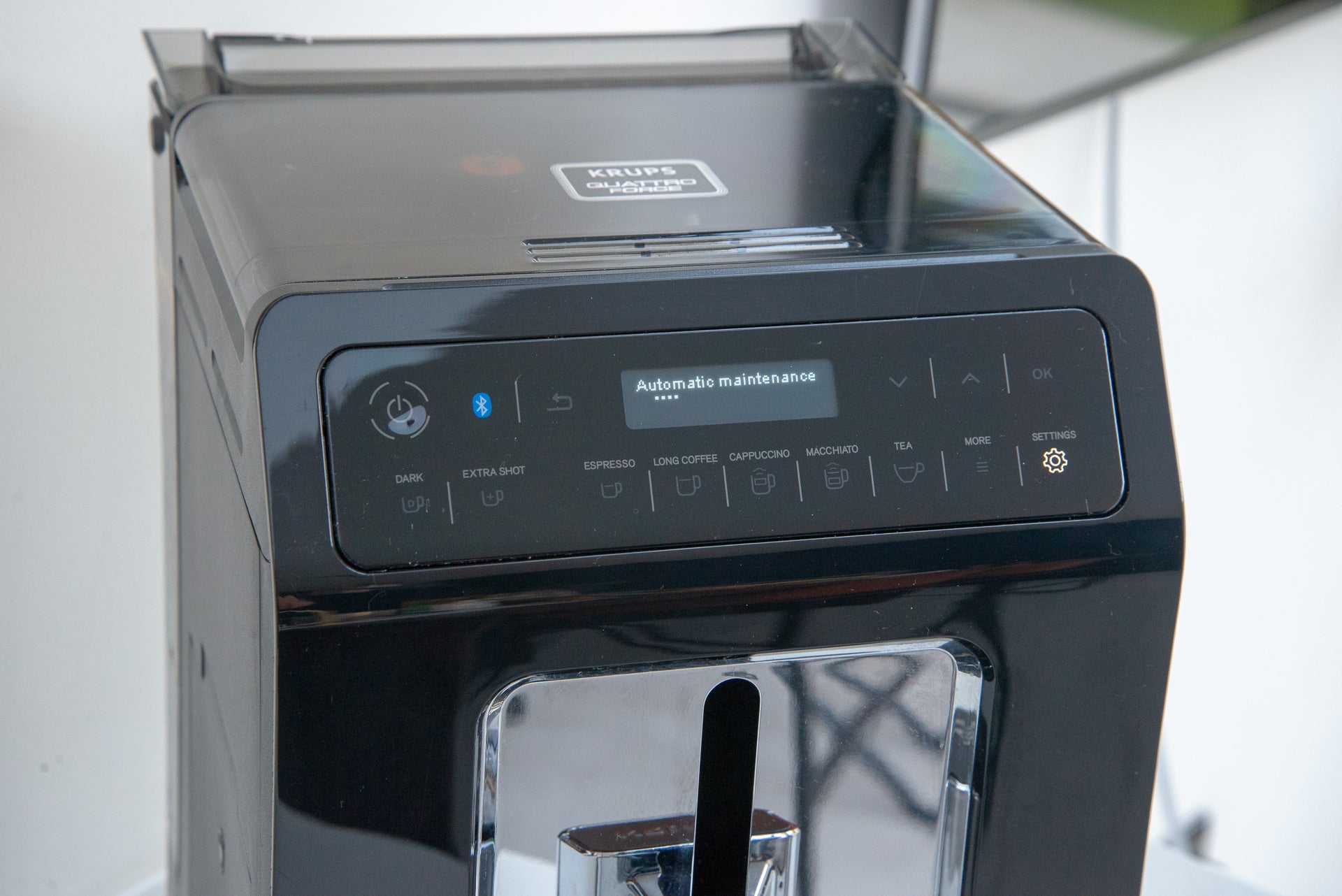 The bean hopper runs across the front of the machine, taking just over a standard bag of coffee (260g). Inside, there’s a small dial that you can turn to adjust the grind of your coffee: typically, a finer grind makes for stronger coffee. 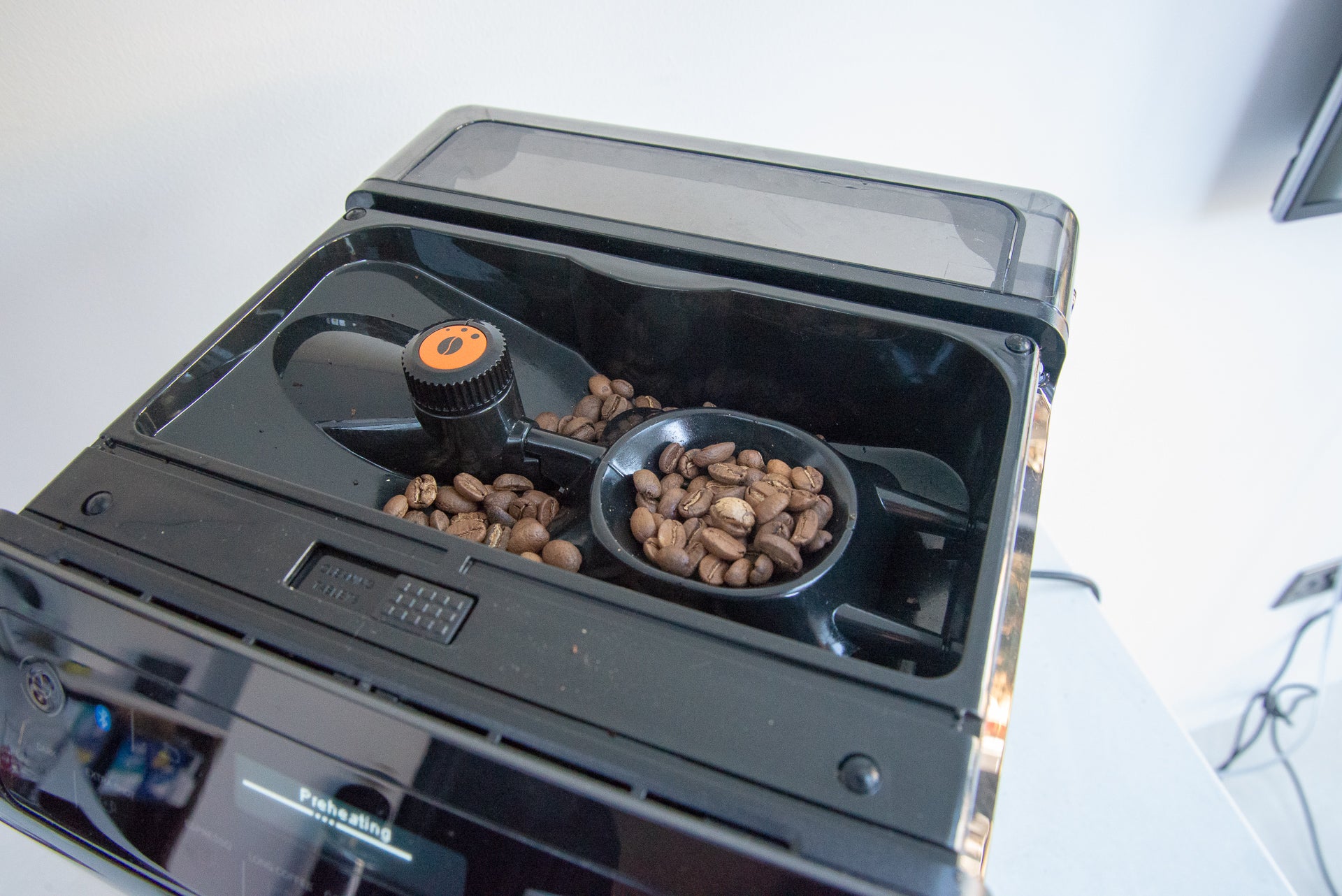 Water goes into the removable reservoir at the back, which can hold up to 2.5 litres of water – a decent amount for a bean-to-cup machine. Inside the reservoir is a compartment for a water filter, of which one is included in the box to get you started.

Also in the box are a couple of espresso cleaning tablets and a water testing strip; with the latter, you can set your water hardness in the machine’s menus. This defines when the Krups Evidence EA893840 will notify that it’s time to run the descaling programme.

Across the front of the machine are buttons to dispense drinks at the touch of the button. They include buttons for espresso, long black, cappuccino, macchiato, plus a sub-menu lets you pick ristretto, frothy milk, doppio and Americano. For the drinks with dedicated buttons, a double-tap makes two drinks.

You can further enhance your drinks by selecting the Dark button (which makes stronger coffee and replaces a dedicated coffee strength control) or Extra shot, which makes drinks with a double espresso shot.

There’s also a tea button, which effectively just outputs hot water. This might be useful, but you can only choose from three heat settings (low, medium and high). On the high setting, I measured the output at 75ºC, which is on the cool side. 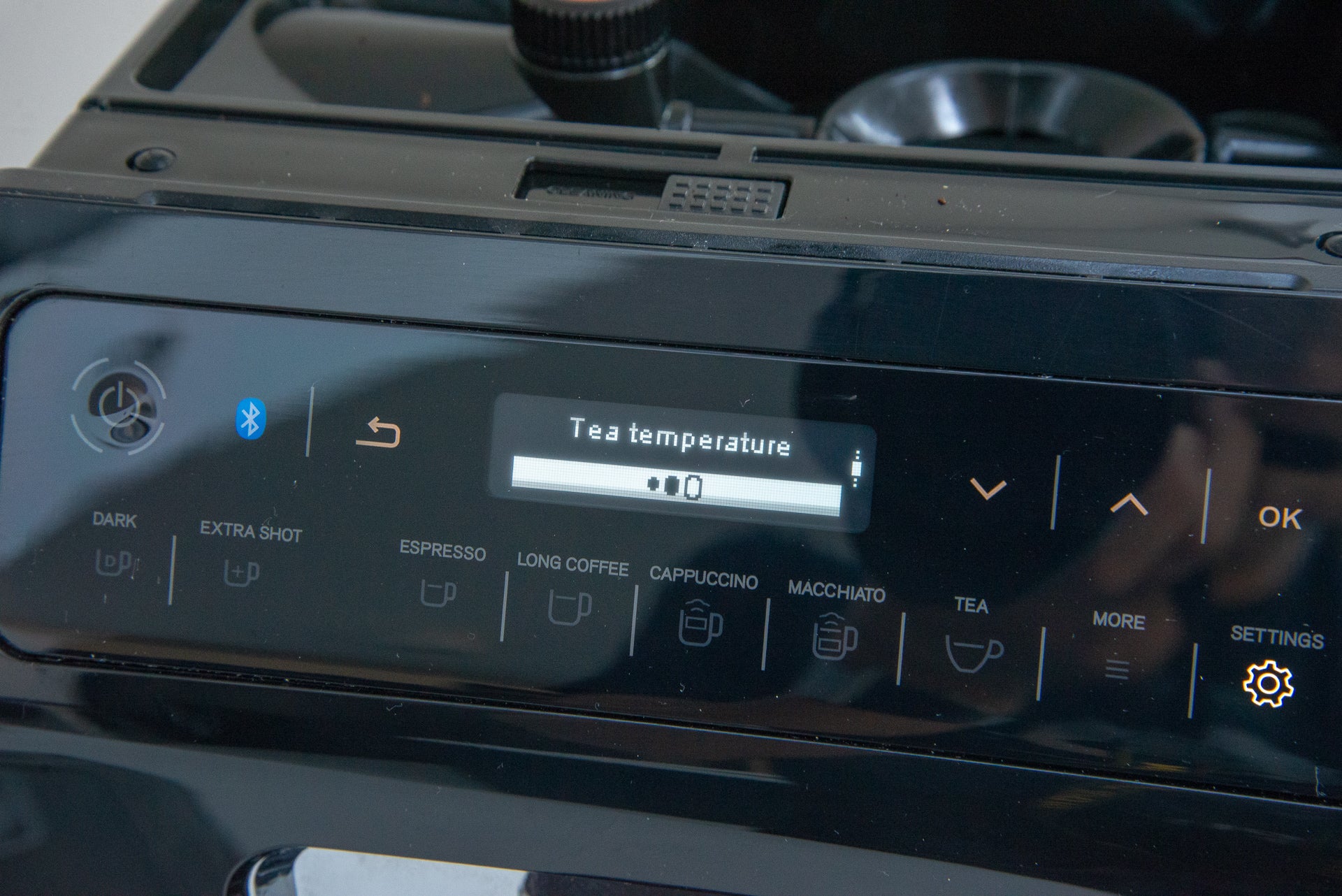 There are few settings to change in the menus, and you can’t set a default dispense amount for any of the drinks this way. Instead, when you start to pour a drink, you can use the control panel’s up and down arrows to select the volume of liquid for black drinks. The Krups Evidence EA893840 then remembers your setting for the next time. 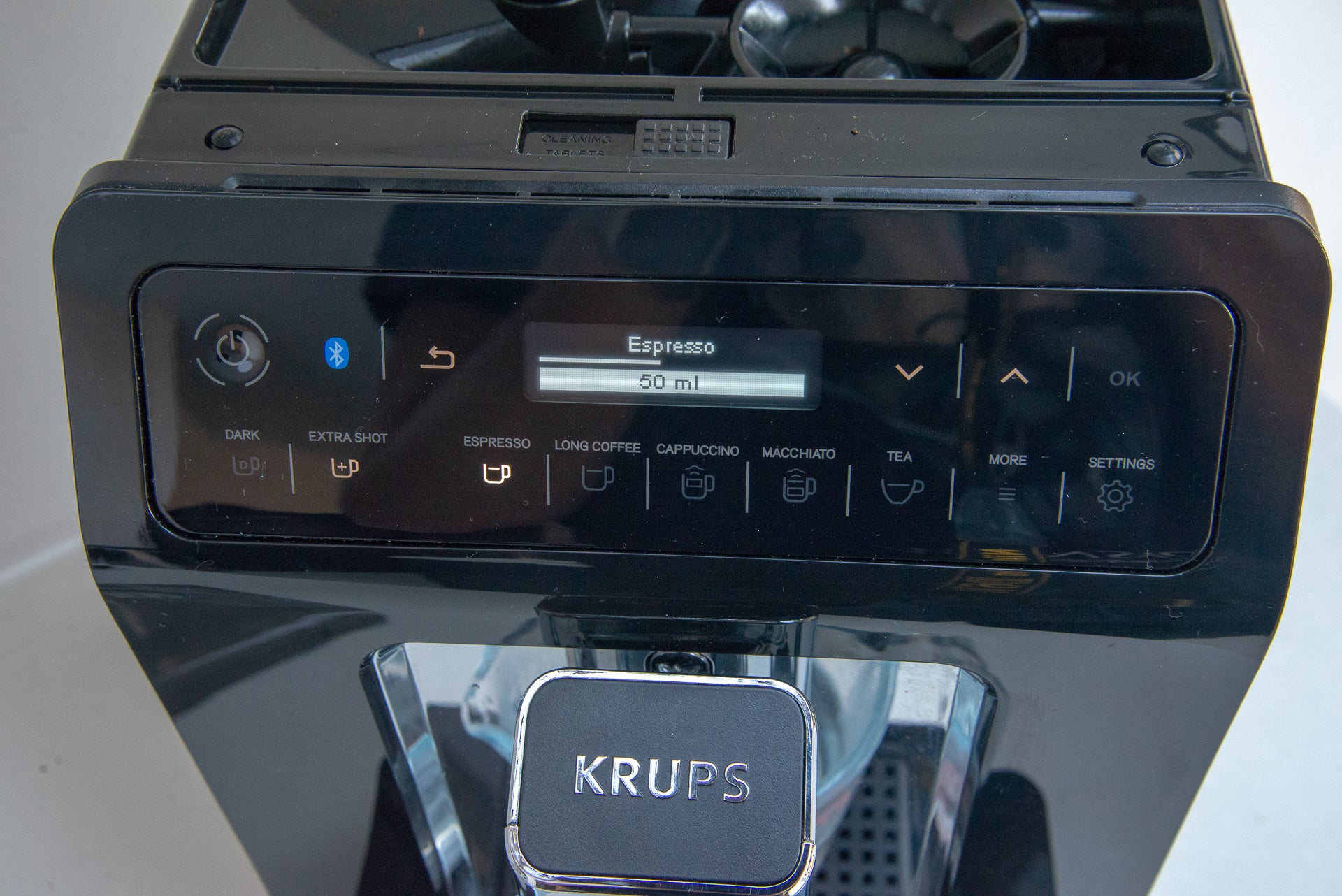 For milk-based drinks, it’s a little more confusing: you have to set the hot milk dispense time in seconds, and then the coffee amount in millilitres. The machine doesn’t offer any control over the amount of froth you want in your drink, either. For those who love to play with the settings and get a machine working just the way they want, the Krups Evidence EA893840 will be disappointing.

Bluetooth lets you hook up the coffee machine to the Krups Espresso app. Tap any of the drink options on the app’s welcome screen, and the Krups Evidence EA893840 will begin making a drink at the last known settings. To make adjustments, you have to tap the menu and go into the Prepare My Drink mode. From this screen, you can select which type of drink you want and then adjust the total volume you want. This includes a cappuccino, so you don’t have to guess how many seconds you want the steam to run for. 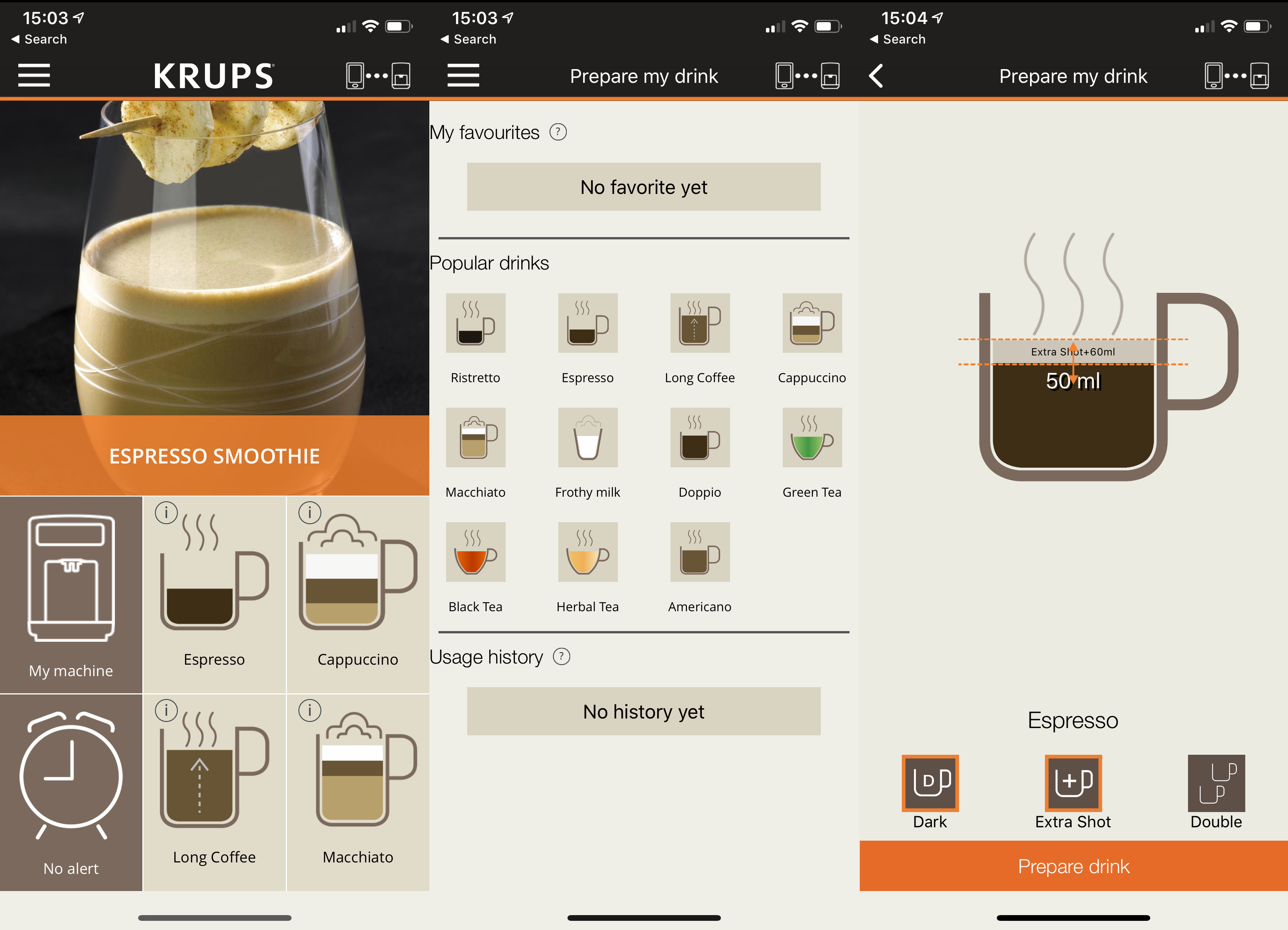 Aside from the slight improvement in the drink selection menu, the app isn’t particularly useful. In fact, taking out your phone, making sure the app is connected and then choosing your drink takes far longer than using the on-device controls. The Melitta Caffeo Barista TS Smart gets Bluetooth right: the app proves useful for configuring profiles and default settings; the on-device controls are easier for making a drink.

The app does tell you how many drinks are left before descaling, how many coffee cycles remain before cleaning, the number of cycles before the filter needs to be changed, and how full the coffee ground container is. However, the latter setting is based on how many drinks you’ve made; the counter resets if you pull out the used coffee bin and reinsert it without emptying.

Espresso quality was very good. I found that the medium temperature setting and a slightly finer grind worked for me, delivering a shot of espresso at a spot-on 63ºC. The crema was nice and oily, without any foam or bubbles, but it was a little light in colour.

The strong, pronounced acidity of my test beans came through, but the shot was a touch on the watery side, with the Krups Evidence EA893840 a little off the mark set by the top bean-to-cup machines. 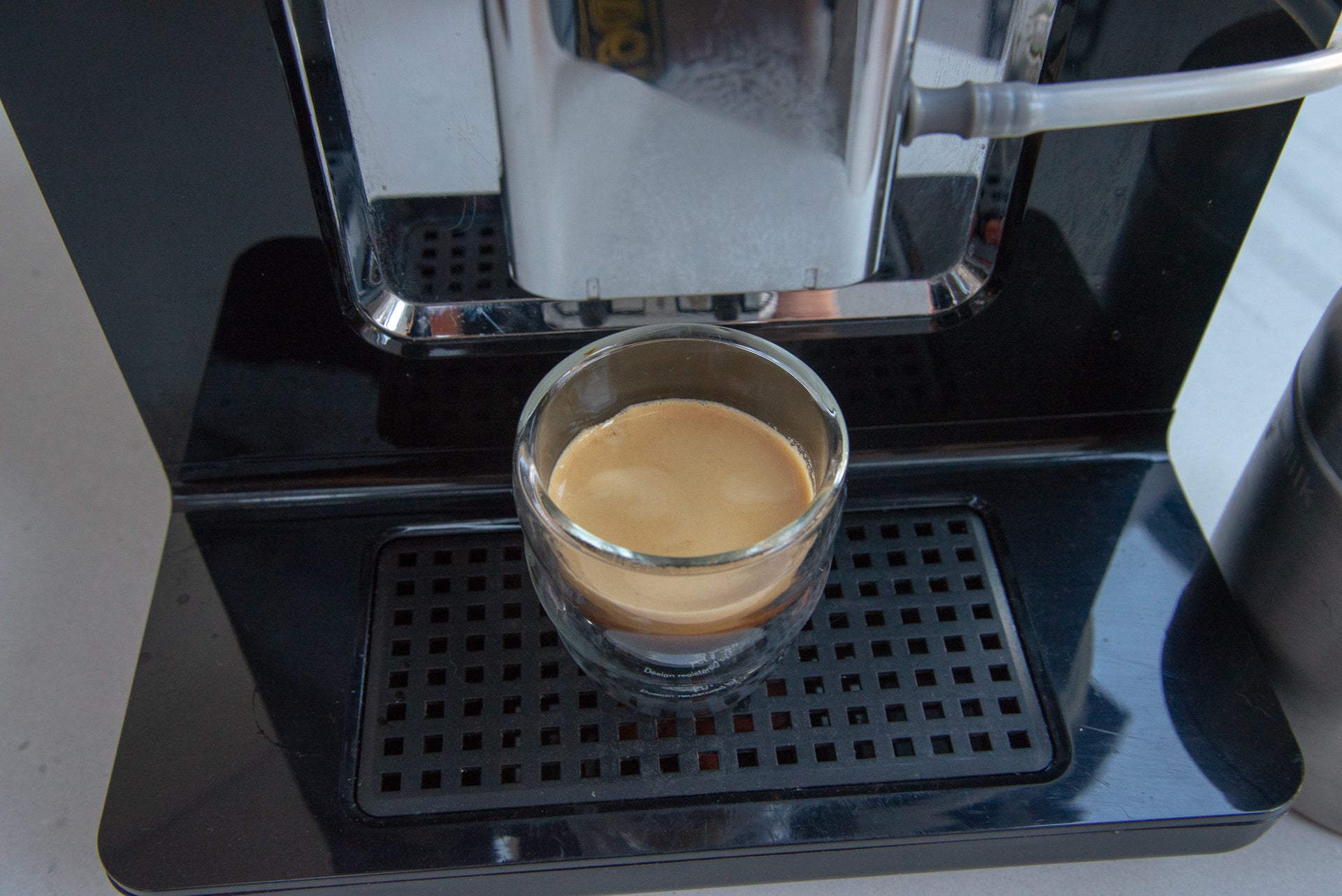 Achieving the perfect milk drink is a little fiddly, due to the way that you have to specify drink volumes. Even so, the Krups Evidence EA893840 did a fairly good job of frothing and pouring the milk first and adding the espresso after. Neat and tightly packed micro-bubbles finished the milk froth. A minor complaint is that there wasn’t quite as much froth as I’d have expected. 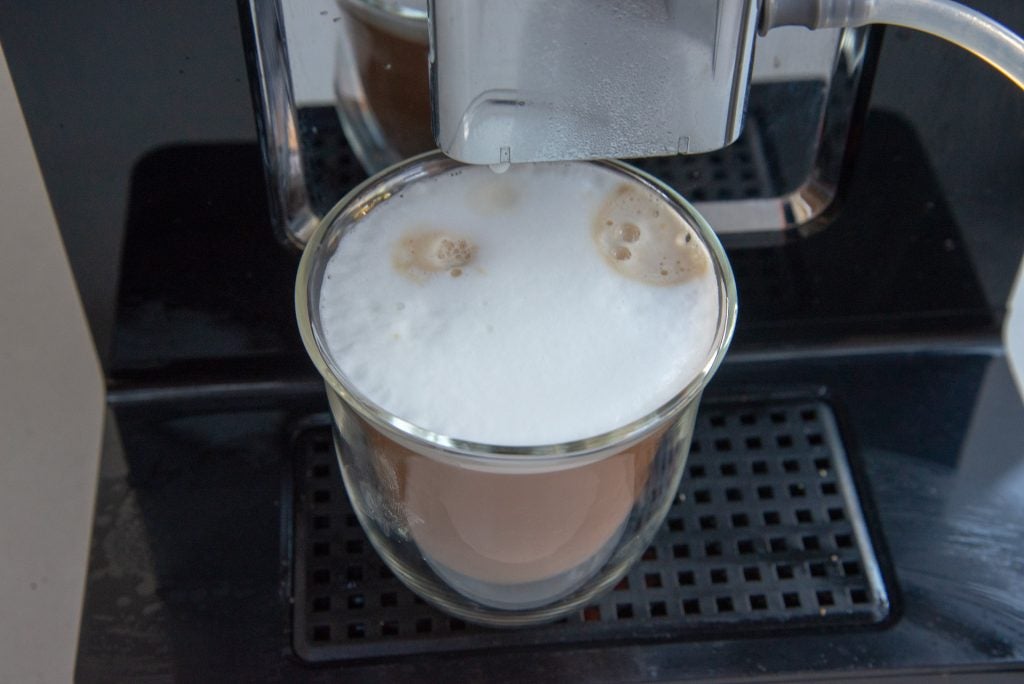 I recommend turning on the automatic rinse option for the machine since this will help keep the coffee system working at its best between cleans. After making a milk drink, the Krups Evidence EA893840 asks if you want to perform a milk rinse. It’s worth saying “yes” to keep the milk system clean – but be warned, it comes up with an odd error message, “Dismantle and clean milk mixture axis”. The manual makes no mention of this term. 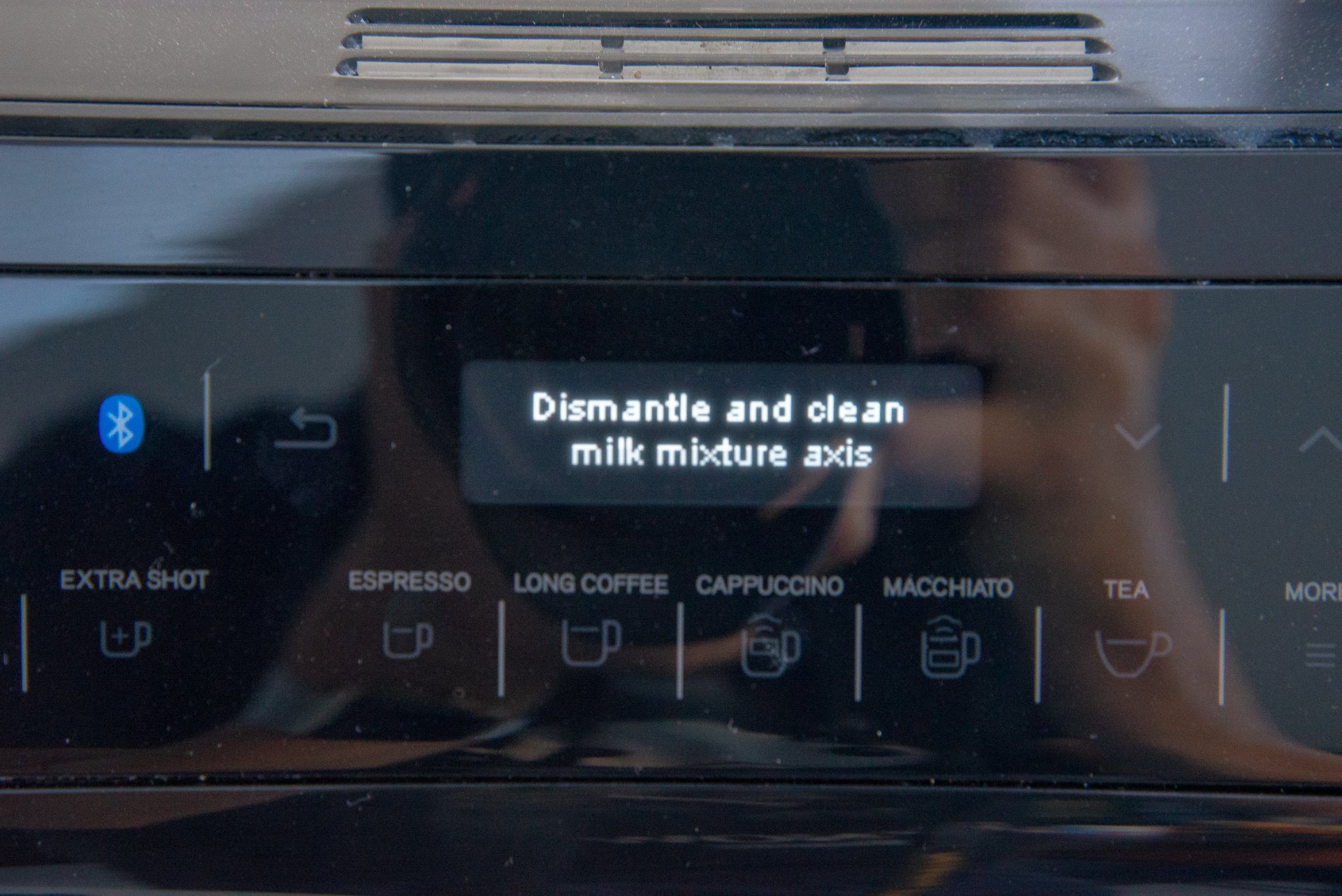 I think what the machine is trying to say is to take out the cappuccino block behind the spout and give it a good clean. It’s a shame that the Krups Evidence EA893840 doesn’t flush the milk tube with steam to keep that clean, either.

The drip tray and coffee bin are kept separate, which makes them easy to empty. The bin takes ten used coffee pucks and was refreshingly dry after use, so it was just a matter of tipping the mess out and reinserting. 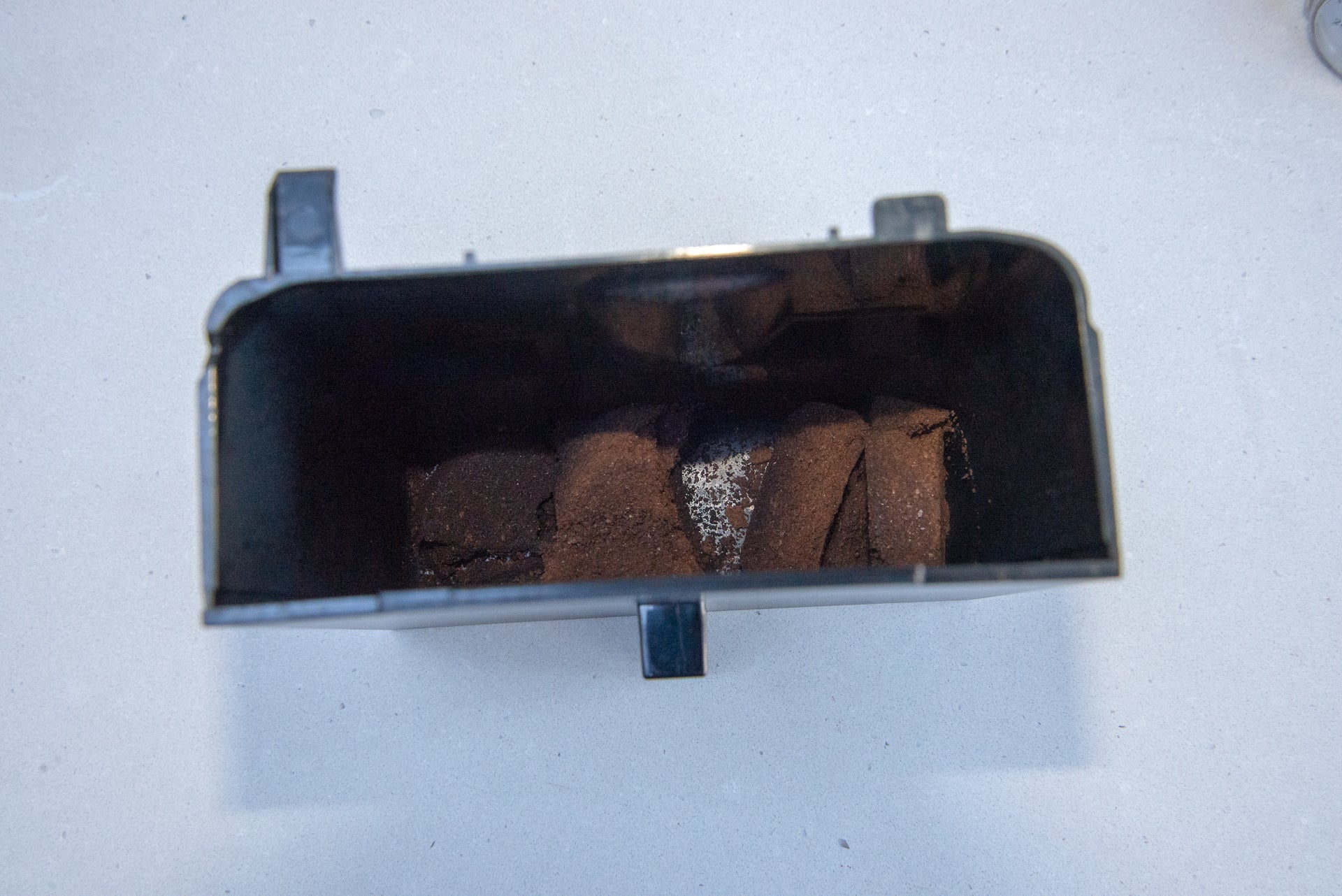 There’s a coffee cleaning tab chute, which you should use when the machine prompts you. Likewise, when prompted, follow the manual to descale the machine. It’s a shame that the brewing unit can’t be accessed and cleaned, as with more expensive machines.

The small size, Bluetooth connectivity, automatic milk steaming and competitive price of the Krups Evidence EA893840 make it look like an attractive option. However, the fiddly menus, particularly when setting a milk-based drink’s volume, and few automatic maintenance options (particularly for the milk tube) all detract.

At this price, the Gaggia Velasca may require you to steam your own milk, but it’s cheaper, easier to use and makes slightly better coffee, too. If you’re after the best bean-to-cup machine, consider the Melitta Barista TS Smart or check out our regularly updated list of best coffee machines.