What is the KitchenAid Artisan Espresso Machine?

The KitchenAid Artisan Espresso Machine is a coffee maker that puts a lot of emphasis on design. Instantly recognisable and bearing the looks to make it the centre point of your kitchen, it’s a statement as well as something to make a drink with.

KitchenAid knows this, and that’s why it costs £535. For this sort of money you can easily buy a good bean-to-cup machine. You do need to fall in love with that design for it to be a top buy, as the relatively slow heat-up and the fact that it’s picky about the preparation of coffee grounds mean it’s not perfect for those after an easy-going machine. 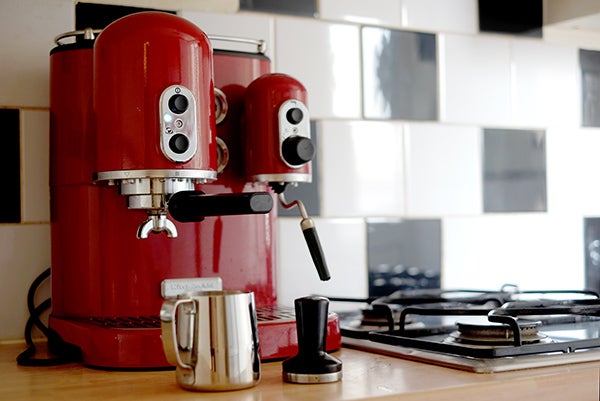 This isn’t just a coffee machine; it’s a work of art.

That’s the kind of statement you might expect to see on KitchenAid’s website, or in an Amazon user review from someone desperate to justify having spent over £500 to make a cup of coffee. But there, we said it.

Design is the primary reason to buy the KitchenAid Artisan Espresso Machine. It is simply the most striking, the most conspicuously ‘crafted’ coffee maker we’ve looked at to date.

Note too that it doesn’t mimic the style of the pro-grade machines seen in high-street coffee chains. Those machines tend to be rectangular, and wider than they are tall, if only to fit in more coffee dispensers. 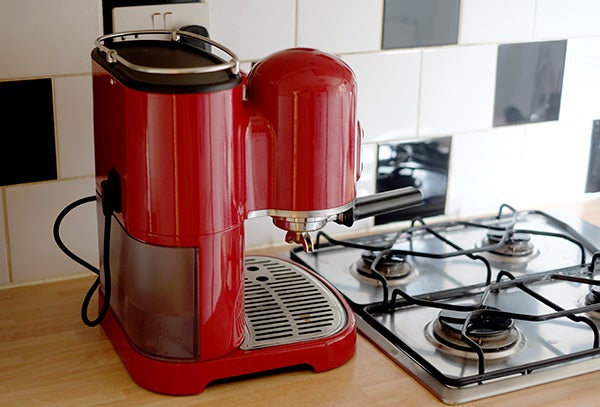 The KitchenAid Artisan Espresso Machine is imposing yet curvaceous and muscular, like a 1953 Cadillac Eldorado.

This is also the most self-consciously well-made espresso maker we’ve reviewed too. The entire front, including the buboes blooming out of it, are made of painted steel, making the KitchenAid Personal Coffee Maker feel exceptionally hard and heavy. It does its best to convince you the lofty price as gone into the construction of the machine. 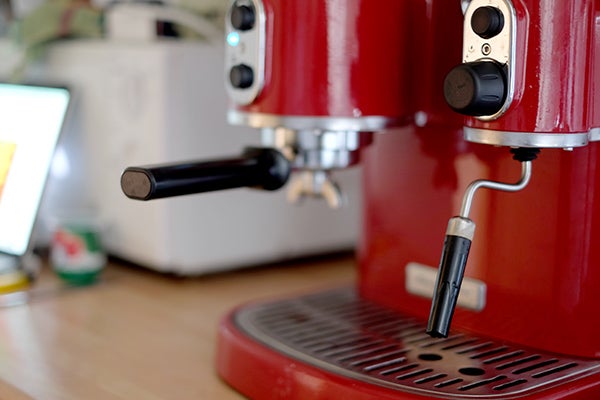 It feels great, but we have heard reports of the paint bubbling and flaking off after a while, which seems a predictable result of something dealing with such varying temperatures as well as water. The bulbous steel parts of the KitchenAid Personal Coffee Maker themselves get fairly warm, although never outright hot in our experience.

As part of its dedication to looking downright gorgeous, the KitchenAid Personal Coffee Maker’s large 2-litre reservoir is hidden completely out of sight, from the front at least. Given how fancy the rest of the machine appears, it’s a pretty basic moulded plastic jug that slots into the back. 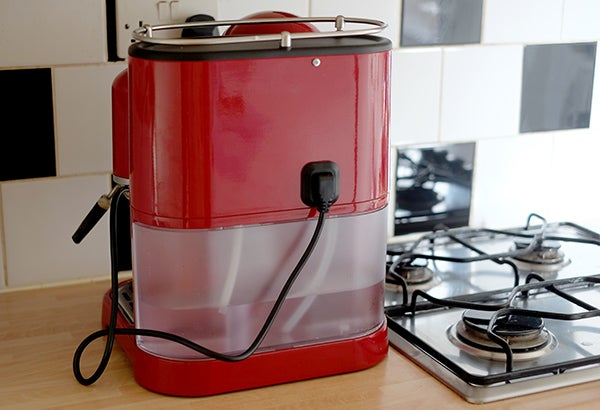 We have mixed opinions about it. While there are no clips or doors keeping it in place, its shape and a little groove on body’s seat mean it can only move laterally, and can be pulled so that it pokes out of the KitchenAid Personal Coffee Maker’s side.

Topping up the water level with a pint glass or jug is easy, but if you’re like us you’re going to want to give it a full refresh every couple of days to avoid using water that’s actually been sitting there for a week or more.

Actually removing the KitchenAid Personal Coffee Maker’s reservoir to do this is
very fiddly. Two hoses for the coffee part and steam/hot water dispenser
plonk unceremoniously into the reservoir, invariably getting in the
way, and you’ll inevitably have to turn the machine around to lift the
reservoir out anyway. 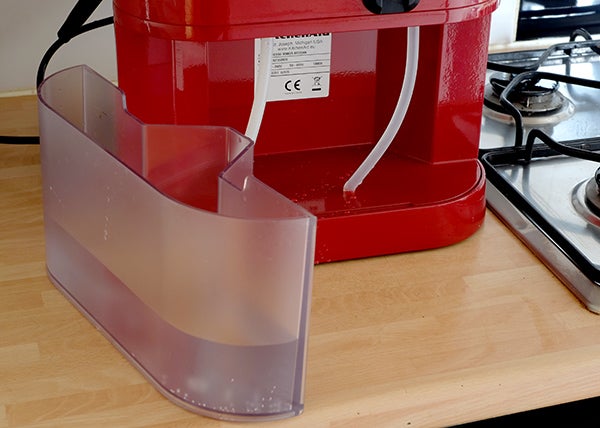 It’s a rather awkward system that is a clear sign style has been valued far and above over practicality here: a shame. Most cheaper coffee machines we’ve reviewed are far more convenient in this regard.

However, while keeping the front aesthetically pleasing is more-or-less paramount, the KitchenAid Personal Coffee Maker does offer everything we’re after. The reservoir is large, the area on the very top of the machine can function as a cup warmer and the frother outputs hot water as well as steam. 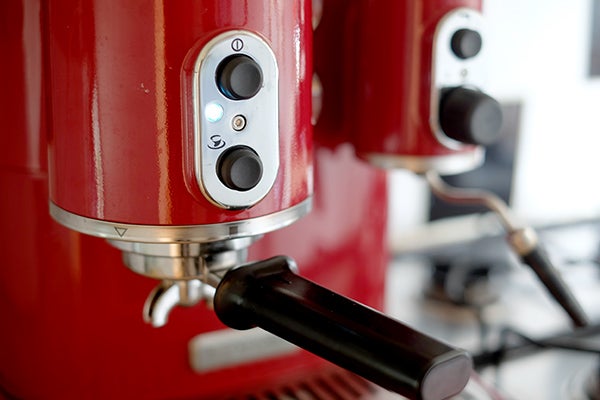 KitchenAid Artisan Espresso Machine – What’s it like to use?

We’ve already mentioned the relative inelegance of the water reservoir is a downer. What will also hold you back day-to-day is the speed of the brewing process.

Two temperature dials sit on the face of the KitchenAid Artisan Espresso Machine, letting you know the temperatures of the water powering both the coffee and the steam parts of the coffee maker maker. There are no centigrade markings on either, but they act as good guidelines as to when you should start actually trying to make a cup. 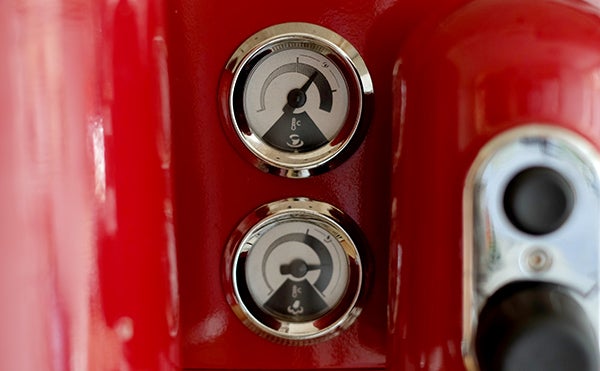 You’ll need to wait a couple of minutes before making an espresso to ensure it’s the right temperature, or a whopping 5-6 minutes should you need the milk frother, or hot water pro produce a long coffee such as an Americano. The frother is effective once it starts going, but its prep takes too long, only really kicking in once the espresso part is at optimum temperature.

The KitchenAid Artisan Espresso Machine will also output tepid coffee from the main arm should you not give it enough time to brew. Given the Krups XP5620 costs a fifth the price and is more reliable on temperature, this is quite disappointing.

Of course, these concerns are minor if you have a spare half-hour every morning in which to have breakfast. It is, after all, just making sure the coffee comes out right. But those with less leisurely schedules should take note.

The KitchenAid Artisan Espresso Machine also takes a pretty traditional approach to preparation. You need to manual tamp the grounds (compress them using a supplied tamper), and the machine comes with a rather nice set of accessories. 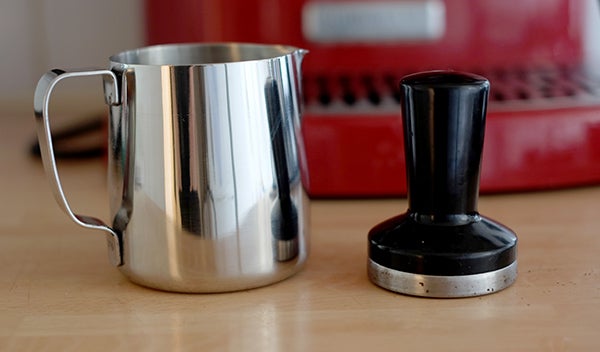 Looking online, reliability issues with this set appear to be quite common. It’s disappointing when rock-solid build seems at first to be one of the KitchenAid Artisan Espresso Machine’s key draws. It certainly has benefits for noise. Because the machine is so heavy and sturdy, it keeps the noise of the pump in check despite being quite poweful. It’s one of the quieter machines we’ve used. 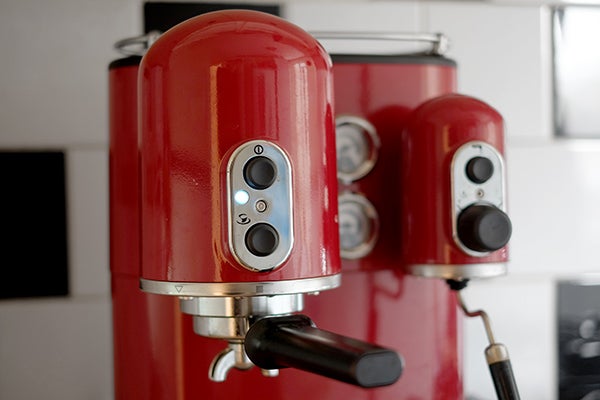 KitchenAid Artisan Espresso Machine – How good is the coffee?

The KitchenAid Artisan Espresso Machine is among the most picky coffee machines we’ve tested to date. While it’s clearly aimed at those who care as much about how the machine will look their kitchen, you need to know what you’re doing to extract a perfect cup from it.

Without careful tamping, the KitchenAid Artisan Espresso Machine will produce virtually no crema because it passes water through the coffee holder with unusual speed.

Quite how quickly it’s able to output a dual-shot measure after making you wait an age during the brewing process is almost comical. This is great if you plan on making a fair few cups, but for those looking to just produce a single round of one or two coffees it feels somewhat wrong-headed. As is the norm for higher-end coffee machines, the KitchenAid Artisan Espresso Machine’s coffee holder is able to fill two cups at once, and as the holder sits relatively high it can accomodate mugs and well as espresso cups. 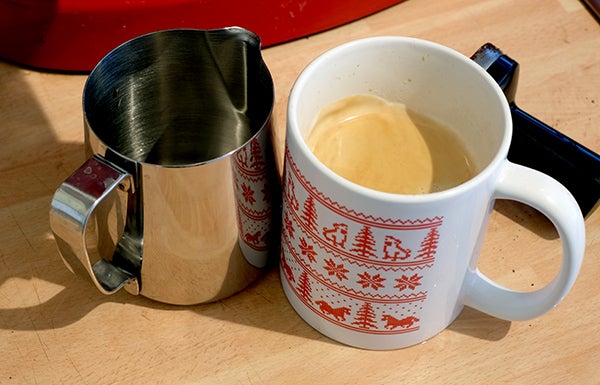 After tamping that bit harder than usual – tamping compresses the grounds, therefore making the hot water take that bit longer to make its way through them – we were able to produce a great cup. With the right preparation the KitchenAid Artisan Espresso Machine produces a very smooth crema and coffee with the right level of bitterness.

We did find it rather unforgiving compared with cheaper sets, so make sure you’re up for schooling-up on tamping technique before buying.

For those after milky drinks, the KitchenAid Artisan Espresso Machine is great if you’re willing to wait that essential six minutes for it to get up to temperature. There’s an analogue steam dial that lets you actually alter the level of output somewhat – other sets’ steam frothers tend to be largely on/off – and maximum output has the almost-violent quality we like to see.

Give it time and the KitchenAid Artisan Espresso Machine can make a superb latte. It’s just not so great for a quick and easy fix. 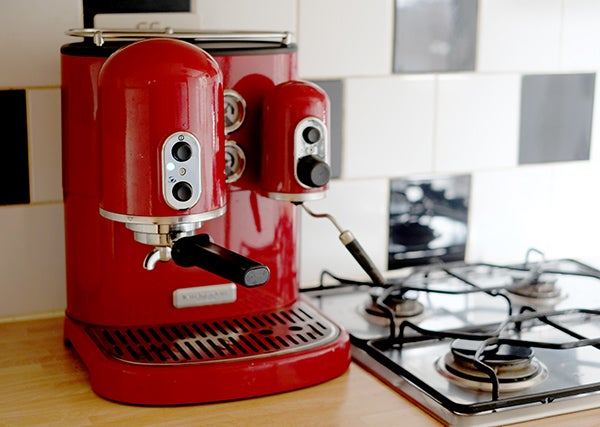 Should I buy the KitchenAid Artisan Espresso Machine?

The KitchenAid Artisan Espresso Machine is one of the most eye-catching coffee machines you’ll find. Available in red, cream, silver and black, there are different levels of boldness on offer, although no-one’s going to buy this espresso maker expecting a wallflower that’ll blend into the background.

However, it’s not the most practical set, especially if you’re not an old hand at using espresso machines. Its preparation times are long, its reservoir is fiddly and it’s more picky about how the grounds are prepared than most.

With the KitchenAid Artisan Espresso Machine you’re paying ‘bean-to-cup’ money for what’s a fairly conventional espresso machine. Why? It seems primarily down to the look, the design. We’ll be looking at some more high-end espresso makers soon, but this particular one doesn’t make its case particularly strongly if you’re not too fussed about pure aesthetic design.

The KitchenAid Artisan’s a beauty, but it’s quirky and, despite the high price, doesn’t offer much beyond the basics.