Since Kodak started selling all-in-ones, all its machines have used the same print engine. Those devices print in five colours (two blacks) with a clear over-coat and the company has pushed the low cost of its consumables as a major sales proposition.

It’s now introduced a new range, with a brand-new print engine, presumably to lower its manufacturing costs. The new printers use a more conventional four-colour process, with no over-coat, and the ESP C110 is the first to launch, at an impressively low price point.

It’s a neat looking, but chunky printer, completely cased in black, apart from a thin, Kodak-yellow strip along the front edge of the scanner lid. The paper support lifts from its closed position on top of the printer, so paper is loaded at the rear and feeds out to a fold-down and pull-out front tray. If you want to load photo paper, you have to remove any plain paper in the feed tray, first. 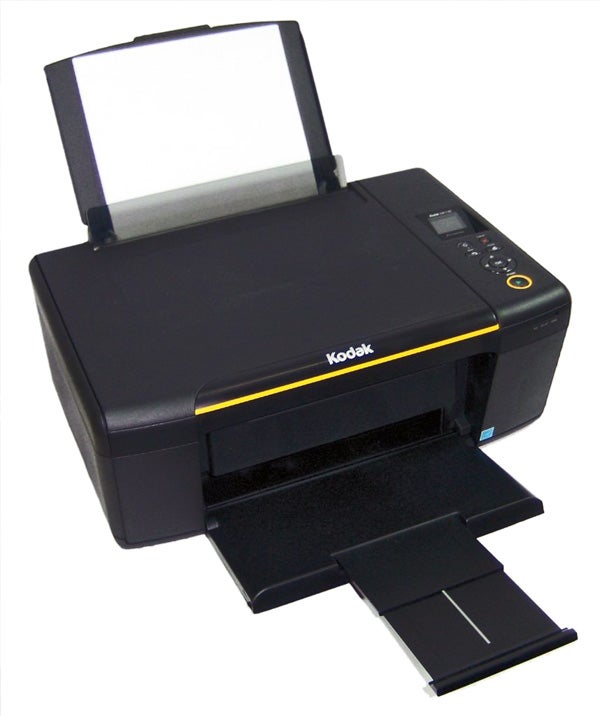 There’s a simple control panel set in front of a small, 38mm colour LCD display. This is fixed and set into the top panel, so is quite easy to see and is still big enough to show image thumbnails. The controls comprise a navigation ring and five other buttons, including a large Start button, highlighted by a yellow surround. In the front lip of the printer is a single memory card slot, which can handle SD and Memory Stick cards. There’s no PictBridge socket. 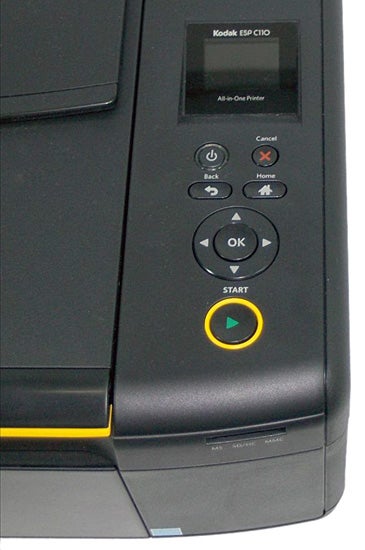 At the back are sockets for low-voltage DC input – the printer comes with a black block power supply – and a single USB socket is the only form of data connection.

Setup is straightforward: just clip the two ink cartridges into the head, once you’ve clicked the head into its carrier in the printer. Drivers are provided for Windows and OS X and the accompanying AiO Home Centre software includes automated photo enhancement. There’s also a cheap and cheerful technique for producing 3D prints from pairs of images, for use with red-green glasses.

Kodak claims 6ppm and 4ppm for black and colour A4 prints, respectively, but we saw a maximum of 3.8ppm for our 20-page black text print and 3.3ppm for our five-page black text and colour graphics document. These speeds are quite a bit slower than from the earlier generation of Kodak all-in-ones and are quite sluggish in comparison with similarly priced competitors. 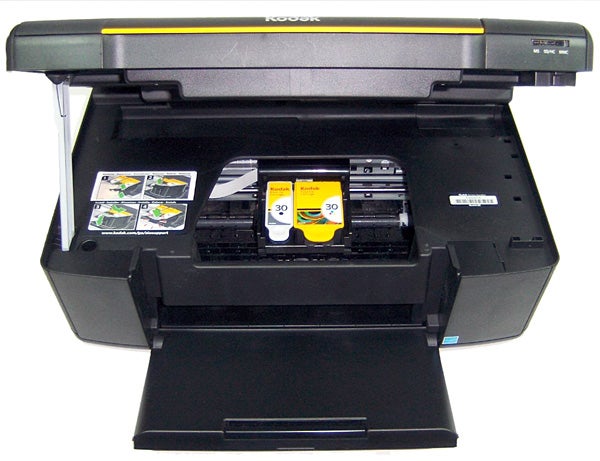 So, how does the new four-colour print system compare with the six-ink engine in Kodak’s older all-in-ones? Doing a direct comparison with the printouts we obtained from the company’s ESP 9250 top-of-the-range all-in-one, there’s very little difference in plain paper prints.

Black text is almost indistinguishable between the two and in both cases is clean, with reasonably well-formed characters. There’s a little fuzziness caused by ink bleed, but not appreciably more than from printers that are more expensive.

Colours too, are just as bright, though possibly a little darker from the ESP C110. There’s some haloing caused by mis-registration of black text over coloured backgrounds, but copies (and scans) come out with very similar colours to originals. 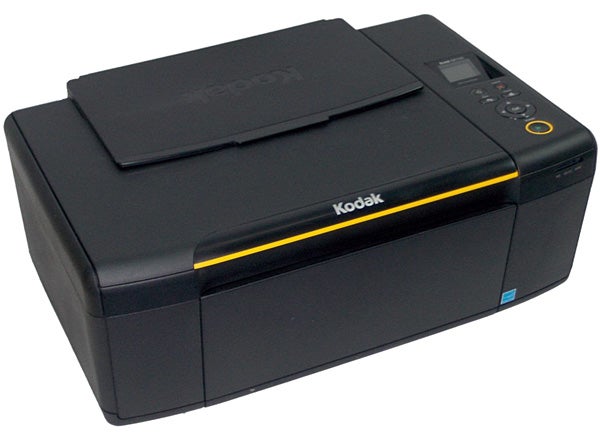 Photo prints aren’t quite as well detailed, particularly in the darker tones, as those from the ESP 9250, but colours are a little more vivid, particularly noticeable in shades of red, which is an improvement over the more expensive machine.

Although, at recommended prices, this printer is marginally more expensive to run than Kodak ESP printers that use the number 10 cartridges, at typical online prices there’s little to choose between them. The number 30 black cartridge is available in standard and XL, high-yield versions, though there’s only one colour cartridge. At the best prices we could find, this gives a cost per page of 1.8p for ISO black and 4.6p for ISO colour.

These are still among the lowest costs we can find for an inkjet all-in-one and given the low purchase price of the ESP C110, make it very good value to buy and run.

It’s easy to see why the ESP C110 makes sense for Kodak, as the design is much simpler and the machine uses a more conventional design. However, with printers like the ESP 5250 available for only £10 more, customers miss out on a larger LCD display, wireless connection, neater paper handling and faster print. And that’s without even looking at rivals like Canon’s PIXMA MG5150.