Canon has revamped its range of photo-enthusiast inkjet all-in-ones and renamed them the PIXMA MG series. The PIXMA MG5150 is at the lower end of the new range, but still has quite a few things going for it. 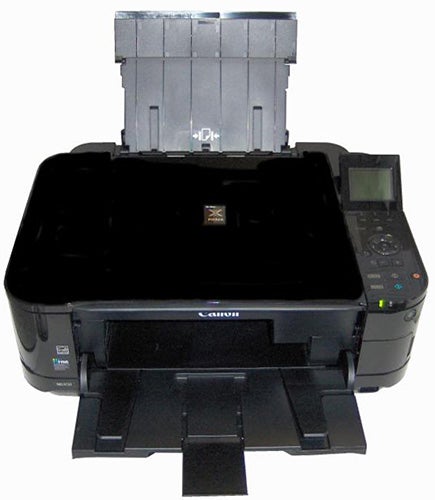 Canon has squared off the case, so that it no longer has bulging verticals, but still includes the wide radius curves to its top and integral duplexer. It still includes great swathes of high-gloss, piano-black plastic, too, which looks nice initially, but shows every fingerprint and micro-scratch – you’ll need a very clean duster to remove dust without marking its surface.


To the right of the flatbed scanner lid is the control panel, which includes a 60mm colour LCD, with a rather loose hinge, which doesn’t always stay where you put it. The menu interface on this display has been restyled and now includes three soft-function buttons, just in front, to select many of the options.

There’s also Canon’s trademark click-wheel, which makes menus easy to scroll through, and large simple buttons for things like print job start and stop. The power button is now set into the curved front corner of the machine, where they used to be more conveniently positioned on the top panels of its machines.


Below the power button is a flip-open cover revealing three different memory card slots, which can take a Compact Flash card, as well as the more recent SD, Memory Stick and xD formats. Right at the bottom of the panel is a PictBridge socket, which will also take USB drives. 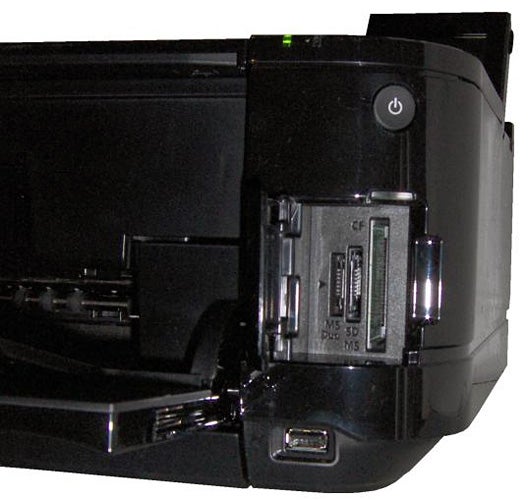 The front panel flips down to become the output tray and can take pages from a 150-sheet upright tray at the rear, or a 150-sheet cassette that slides in underneath, from the front. The rear tray is normally reserved for photo paper. At the back is a single USB socket, the only data connection on this machine, as it has no network capabilities.


The five individual ink cartridges, with both a pigmented black and a dye-based equivalent for use in photos, have a new, shallow design, enabling the overall height of the printer to be reduced.


The usual, well-featured set of applications is provided and now includes a feature to take stills from an HD video and enhance them to print as individual photos. We guess Canon must have run the focus groups to mark this as a potentially popular feature.

For a year or more now, Canon has quoted ISO speeds for its printers, a commendable move and one that means what you see is much closer to what you get. The company rates the PIXMA MG5150 at 9.7ppm for black and 6.1ppm for colour. Although we only saw 7.7ppm for black and 3.6ppm for colour, it’s interesting to note that these speeds are faster than the £90 Kodak ESP 5210, which its manufacturer rates at 30ppm and 29ppm, respectively. OK, these are draft speeds, but Kodak doesn’t quote normal-mode ones. Don’t always believe what you see on the box.


Having said that, Canon’s duplex print, which is standard on this model, is still horrendously slow, with our 20-side duplex document taking 9mins 42secs to complete. This is mainly down to the dye-based inks needing extra drying time between sides. The printer also appears to use its photo black when printing duplex pages, which is slower and gives a greyer black. 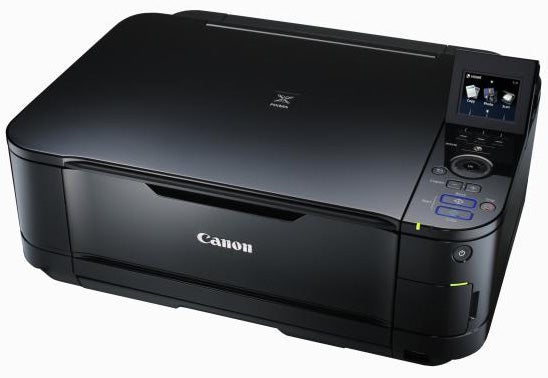 A colour photocopy took 43 seconds, a little longer than some of its rivals and 15 x 10cm photos took between 52 seconds and 1min 22secs, depending on the source we were printing from.


Print quality in general is as good as we’ve come to expect from Canon. We saw clean black text, bright colours, authentic copies that are unusually close to originals, and excellent photos. Photo reproduction shows accurate, natural colouring, high levels of detail in bright and shadowed areas and no noticeable colour casts of any kind


The five ink cartridges are only available in one capacity, though Canon does sell a twin-pack of the pigmented black ink and a four-pack with one cartridge of each of the colours. Both these packs represent discounts over the individual prices and at the best prices we could find give costs per page of 3.9p for black and 9p for colour.


These are a little on the high side, when measured against something like the HP Photosmart Wireless B110a, around 0.8p more for black and 1.4p more for colour


Canon’s PIXMA MG5150 is an evolutionary printer, offering nothing particularly spectacular over the equivalent model from its previous range, but is still one of the best mid-range, all-in-one machines available today. Duplex may be slow and running costs are a little high, but these may well come down over time as retailers sell more of them. The feature set, for a printer costing just over £70, is exceptional.