The Kobo Arc runs Android 4.0, known as Ice Cream Sandwich. On top of this is a Kobo-made custom interface called Tapestries. Its job is to try and direct you towards the Kobo book store, without blocking access to important tablet features like the internet browser, YouTube and Facebook. 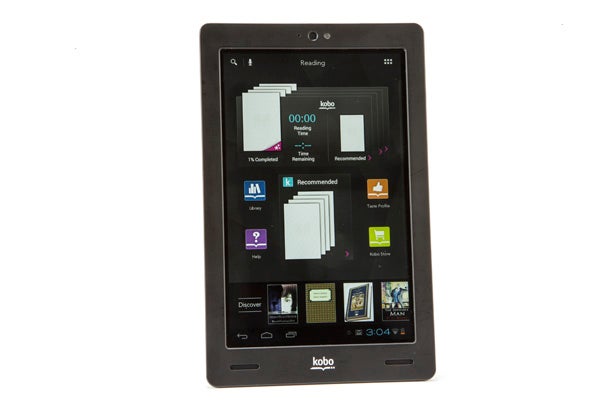 But on to the part that wants to flog you books. 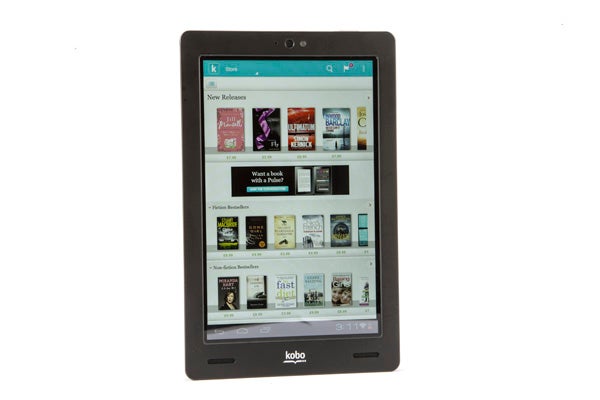 At the bottom of the Tapestries home screens is a Discover shortcut bar that features thumbnails of book covers from the Kobo eBook collection. Tap on one and a pop-up will appear, offering a brief synopsis, the option of a preview and – naturally – a chance to buy. The books that appear in the Discover bar are based on what Kobo calls a Taste Profile, which rifles through the books you’ve bought and searched for. 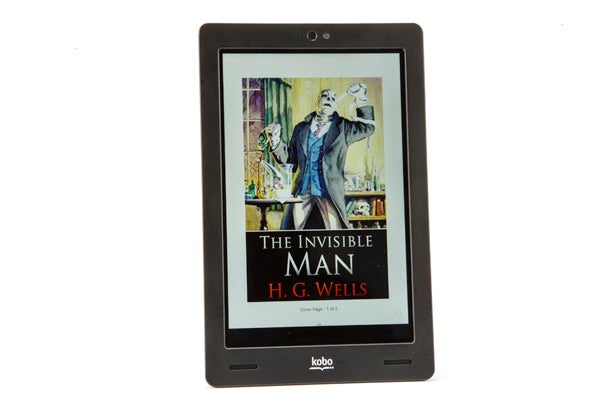 There’s also a widget-based Kobo books interface that roughly mimics the UI of Kobo’s E-ink eReaders. Aside from giving you access to the Kobo Store and your library of bought books, it also lets you know how long you’ve spend reading your current book, and how far through it you are. One of Kobo’s neatest USPs is this tracking of your reading behaviour – even if it is only going to remind you that it takes you ten minutes to read a page.

With animated transitions, the Kobo Arc interface looks and feels fairly slick, and it’s also far more flexible than its Amazon rival. The Kobo-related widgets can be moved to another home screen if they get on your wick – it’s only the Discover bar you can’t kill. 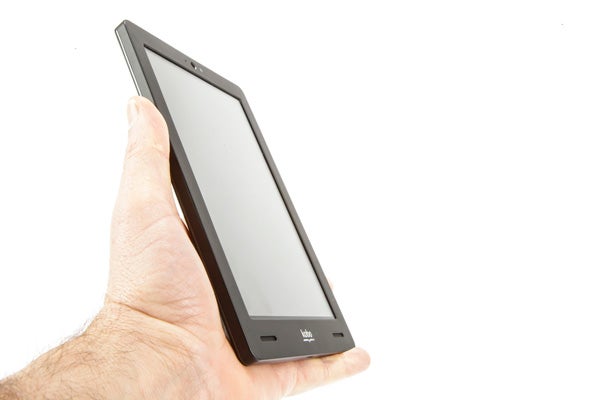 However, you can circumvent the Tapestries interface entirely. Install another custom Android interface – there are plenty available on Google Play – and Tapestries can be replaced wholesale. You could not do this with a Kindle Fire HD, and it’s all because the custom UI of the Kobo Arc is a good deal shallower than that of the Kindle. For anyone with a spoonful of techie nous, this is a good thing.

This leaves the Kobo Arc feeling freer than most LCD eReader tablets, but that it runs Android Ice Cream Sandwich rather than the newer Jelly Bean version is a shame. In version 4.1 Jelly Bean, Google implemented Project Butter. This refined how the Android system uses CPU power, revving the engine much harder in the short spaces where it’s needed. Without this, the Kobo Arc’s general navigation feels a mite sluggish compared with Google’s Nexus 7. 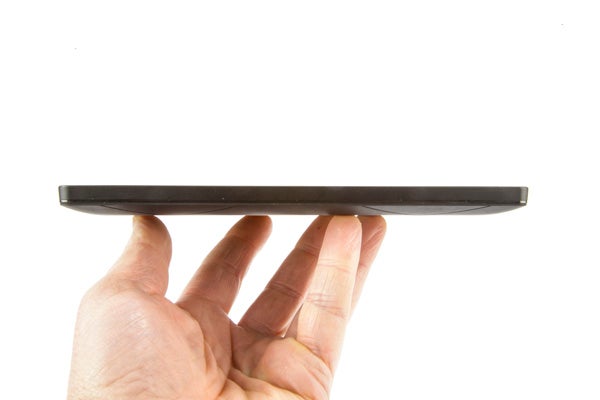 The Kobo Arc has a dual-core 1.5GHz Texas Instruments OMAP 4470 processor, coupled with 1GB of RAM. Although it has fewer cores than the Tegra 3 of the Google Nexus 7, it’s a powerful chipset, outperforming Tegra 3 in a number of benchmarks. We took the Kobo Arc for a test drive with a few high-end 3D games like Dead Trigger and found it performed admirably.

One of the most important selling points about the Kobo Arc is that your access to games like these is not restricted. As it uses the official Android Google Play app store, apps and games support is excellent in its class. Next to it, the limited selection on the Nook HD store seems woeful.

The usual Android complaint persists, though. You’ll get a better app selection with an iPad mini. 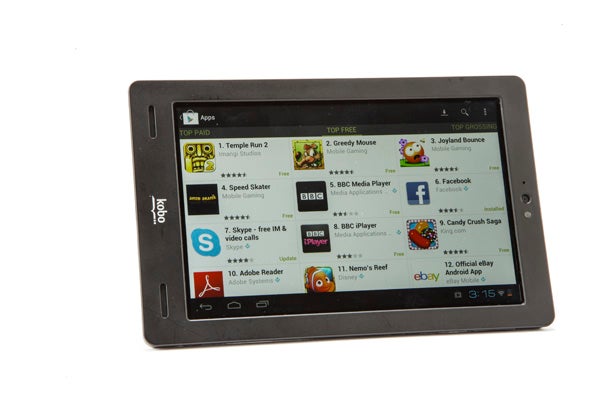 As Kobo does not offers its own portals for music and video – it’s just about books – the Arc has been loaded with the 7Digital music app to fill up, while Google’s own video store does the job for videos.

7Digital is a music store that sells albums for around £8, and the Play Store’s video service will rent you a flick for £3.49. Neither is hugely noteworthy in its class, but they help to ensure that the Kobo Arc’s digital content gun barrels are full. And there’s nothing to stop you from installing your preferred music service’s app on the tablet. 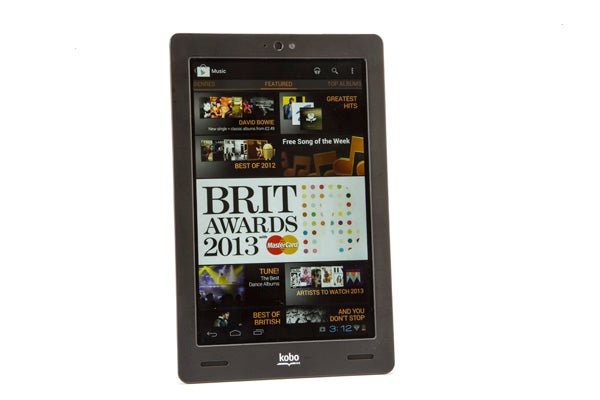 The Kobo Arc does provide unusually good video codec support for those who already have their own treasure trove of downloaded videos. MKV files played without a hitch, and both DivX and Xvid played perfectly too.

However, like the Google Nexus 7, the Kobo Arc’s audio output isn’t hugely impressive. The internal speakers perform well enough, using stereo drivers to crank out respectable volume for a small tablet, if at the coarse sound quality we expect from such tiddly speakers. Kobo has pre-installed a basic TruMedia EQ app too, to help mitigate the limitations of the drivers, with moderate success. 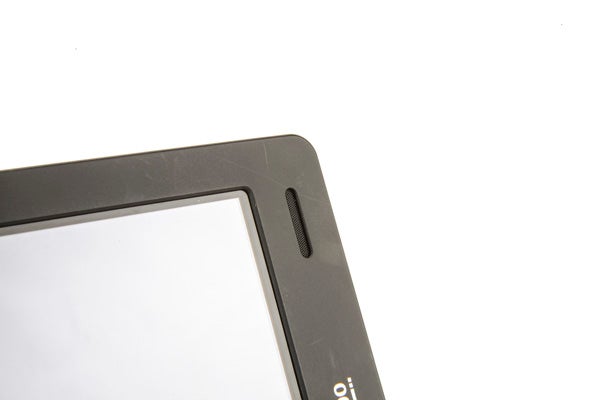 It’s the headphone jack that’s a more notable issue. Volume output isn’t great, and we found that we needed to crank up the volume to maximum in anything but a silent environment. And in a noisy one, even that was not quite enough.

Kobo says that the Arc will last for 10 hours off a charge. We found that it did not quite reach this target, but it puts in a respectable performance, capable of chewing through around eight hours of video, with wireless turned off, before conking out.

After the disastrous Kobo Vox, Kobo has upped its game significantly with the Arc. Performance, design and value are all much-improved. That Kobo has managed to produce such an aggressively-priced device without being able to lean on nearly as many profit-reaping portals  as Amazon is impressive. 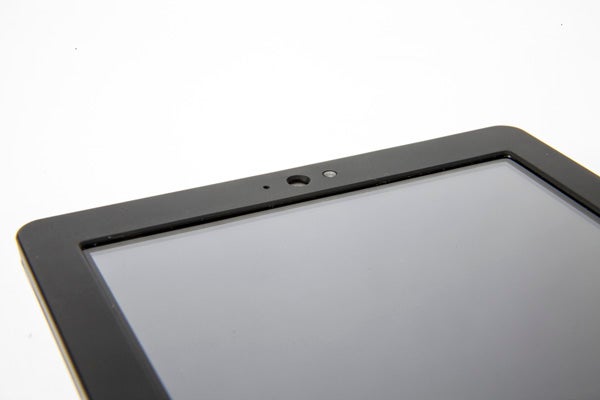 There are issues with the Kobo Arc. It could be a little nippier at times, there’s no GPS and the screen’s colours are a tad dull. But aside from the class-leading Google Nexus 7, it’s the top budget tablet pick for techies who like to tinker.

The Kobo Arc shows that, after the poor Vox tablet, Kobo does know how to do things other than make E-ink eReaders. With a keen price, decent innards and a respectable, if not great, screen, it’s a serious contender in the low-cost tablet space that the Nexus 7, Kindle Fire HD and Nook HD all live in.  We prefer the Google tablet, but without the limitations of the rigid Amazon and Barnes & Noble UIs, it’s a solid choice for those who want an eReader experience integrated into their tablet.